Who knew there was so much money in rags and bones? I can reveal that Ray Galton, who co-wrote the classic sitcom Steptoe And Son, left more than £2 million in his will.

In the comedy series, set in the fictional Oil Drum Lane in Shepherd’s Bush, London, ‘dirty old man’ Albert Steptoe and his aspirational son, Harold, scrape a living by spotting gems among other people’s junk.

The pair met in a sanatorium near Godalming, Surrey, during the Forties, where they were both suffering from tuberculosis.

The duo created one of the first sitcoms — Hancock’s Half Hour — based on characters and experiences, rather than jokes.

They went on to write Steptoe And Son, which, at its peak, attracted audiences of 28 million — unthinkable today. They also wrote for comedians Frankie Howerd and Les Dawson.

When Galton and Simpson co-wrote sketches for BBC radio, they earned five shillings a time. 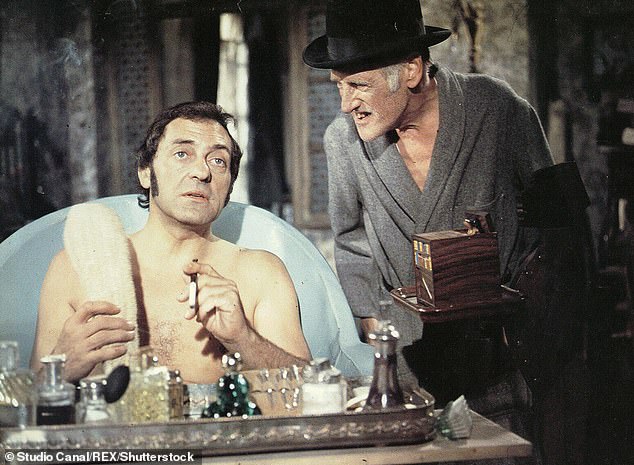 By the time they were writing for Tony Hancock, they were earning an unimaginable 25 guineas a week. Now, Galton’s children can enjoy riches, not rags. The writer — whose wife Tonia died from cancer in 1995 — left a gross estate of £2.23 million.

Probate documents disclose that he gave a one-third share of his home, Ivy House in East Molesey, Surrey, on trust to his son, Andrew.

He had already given a one-third share of the property to his daughters, Lisa and Sara Galton, in 2012.

The sisters will also share a financial legacy, calculated using the amount of inheritance tax payable on his death, and they will receive a one-third share each of the rest of his estate.

According to the will, Andrew will receive his one-third portion of the rest of his father’s estate on trust.

The reunited Ant and Dec navigated an awkward chat with their ITV boss, Kevin Lygo, at a Royal Television Society conference yesterday.

Lygo’s remark that the pair are ‘never any trouble’ caused panel chair Susanna Reid to raise an eyebrow.

‘Is that a slightly pointed remark?’ asked the Good Morning Britain presenter, who was too polite to delve into Ant McPartlin’s previous off-screen troubles. 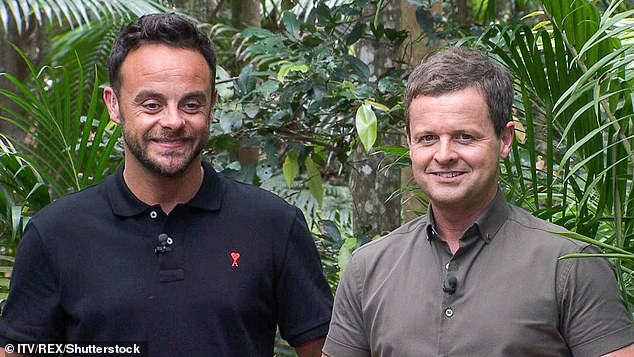 The reunited Ant and Dec (pictured on I’m a Celebrity… Get Me Out of Here!) navigated an awkward chat with their ITV boss, Kevin Lygo, at a Royal Television Society conference

Socialite Amanda Eliasch dressed up as a schoolgirl as she auctioned off her wardrobe in Oxfordshire in tribute to her grandfather, the St Trinian’s film-maker Sidney Gilliat. The idea was ‘to create good juju’.

It seems to have worked — the sale raised £70,000. ‘It was a little irksome to see an Alexander McQueen jacket go for £150, but it was great seeing people get a chance to share my collection,’ she tells me.

‘I can’t wait for the sale of art and furniture in October, including my now-notorious sex chairs.’ Lawks! 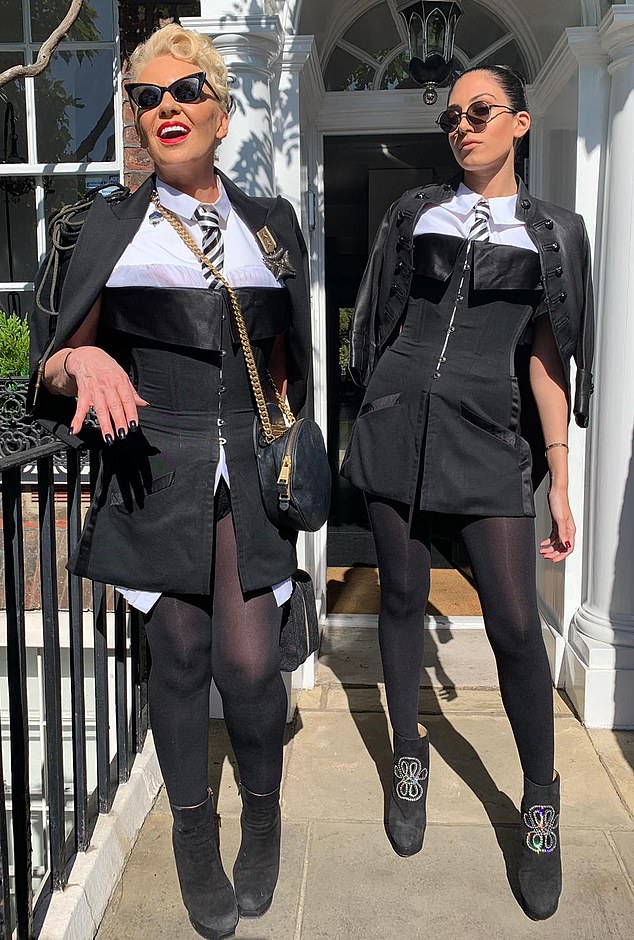 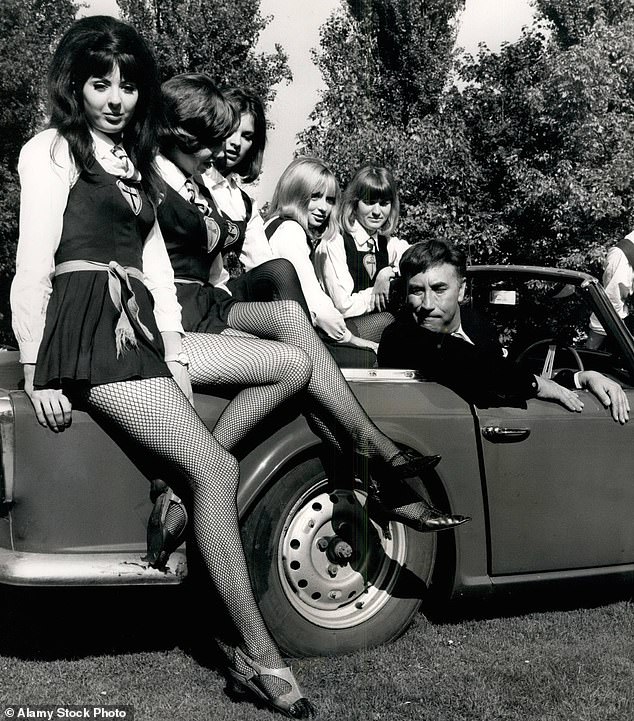 A sale in tribute to her grandfather, the St Trinian’s (pictured) film-maker Sidney Gilliat, raised £70,000

How can Brad Pitt refuse? Sir Paul McCartney reckons the 55-year-old Fight Club actor would be the perfect pick to star in a film adaptation of his children’s book about a magical grandfather, Hey Grandude!

‘Brad Pitt would be the ideal choice,’ says Macca. ‘He might need a little bit of make-up and prosthetics here and there, and a hairband, but I think he would be very good, don’t you?’

Pop and rock singers should not be given knighthoods, says the former lead singer of The Hollies.

Allan Clarke, who performed on all the group’s hits, including He Ain’t Heavy, He’s My Brother, reckons only music greats who do a lot of charity work deserve gongs.

‘Rock stars shouldn’t be sirs,’ says Clarke, though he refuses to name those he considers undeserving.

‘If you look back to the old days when people were knighted, it was usually people who did things like cross the Antarctic and put their life in danger, or something extremely brave like saving other people’s lives. But rock ’n’ roll? I don’t think people in showbusiness should be knighted.

‘Maybe if they do a lot for charity — if that is the case, fine. Elton John was rightly knighted for his contributions to music and charity.

‘Sir Paul McCartney is also an exception, as The Beatles changed music for ever and Paul quietly does a lot of charitable things.’

Clarke, who is making a comeback with a new solo album, Resurgence, has never been offered an honour, despite his Hollies co-founder Graham Nash receiving an OBE in 2010. ‘I don’t think I deserve one,’ says Clarke. Perhaps all he needs is the air that he breathes . . .

Old Etonian Rory Stewart must be either the richest, the most prudent or the most honest of the recent Tory leadership candidates — he is the only one to have declared that he returned £30,000 of donations to his donors.

One of those refunded £10,000 is Khaled Said, the son of Syrian-born billionaire Wafic Said.

Jo under a cloud, sheer chic — and Paloma all at sea!

Is London Fashion Week becoming the event that taste forgot?

Jo Wood, the former wife of Rolling Stone Ronnie, strode the catwalk for Vin + Omi at the Savoy wearing a cloud-like creation.

‘It was horrendously roasting hot,’ she tells me. Meanwhile, model Neelam Gill shimmered in a daring black cutaway dress at the Vogue party at Annabel’s.

And singer Paloma Faith turned up to the bash in a suit with nautical battle scenes emblazoned on frill-hemmed trousers. Anchors aweigh!

Model Neelam Gill (left) shimmered in a daring black cutaway dress at the Vogue party at Annabel’s. And singer Paloma Faith turned up to the bash in a suit with nautical battle scenes emblazoned on frill-hemmed trousers (right) 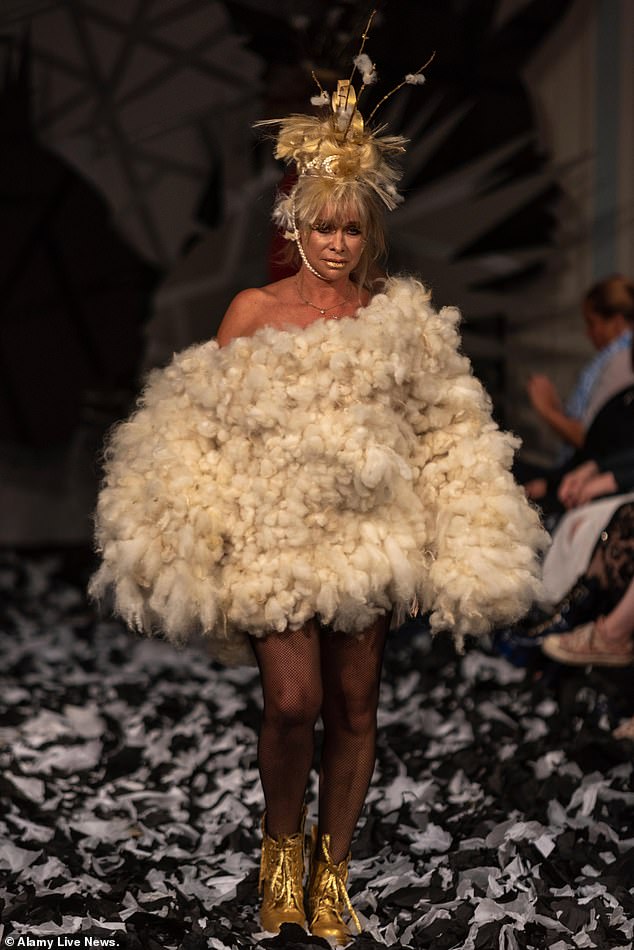 Jo Wood (pictured), the former wife of Rolling Stone Ronnie, strode the catwalk for Vin + Omi at the Savoy wearing a cloud-like creation. ‘It was horrendously roasting hot,’ she tells me

Midsomer Murders hunk Nick Hendrix, who plays Detective Sergeant Jamie Winter in the long-running series, says he is his own worst critic when he watches himself on telly.

‘There’s a bit of vanity when you watch yourself on TV,’ he tells me at the launch of the Prince Akatoki hotel in London (right).

‘You get a lot of actors who say: “I never watch anything I do,” and I think: “How do you learn?”

‘I always watch myself back so I can go: “Oh, that’s a weird face I’m pulling there.”

‘I’m self-critical, but I have to be — otherwise you’re just watching yourself and going: “I’m brilliant,” and you’re not learning or going anywhere as an actor.’ 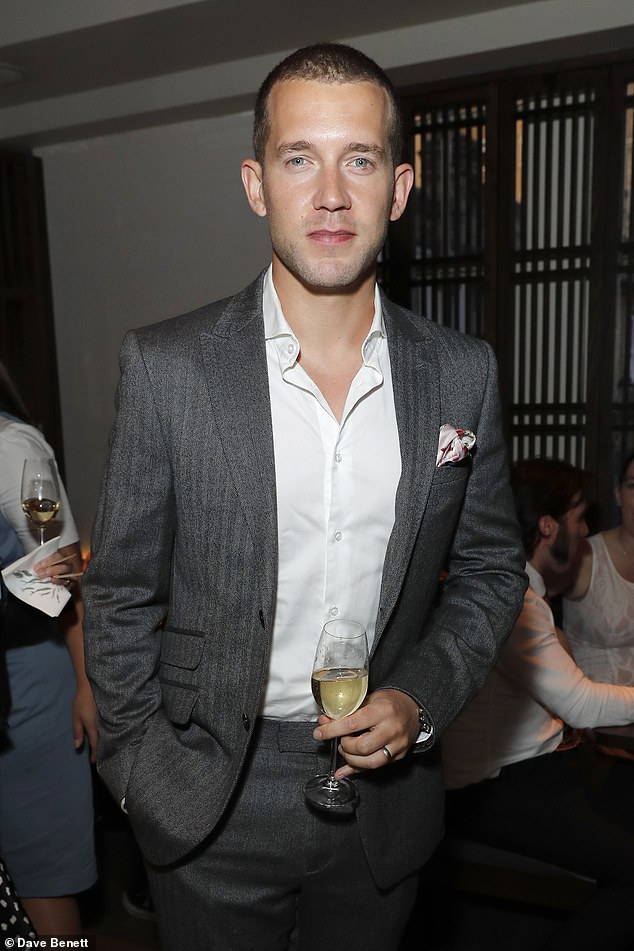 Midsomer Murders hunk Nick Hendrix (pictured), who plays Detective Sergeant Jamie Winter in the long-running series, says he is his own worst critic when he watches himself on telly

That’s spliffing! He came out as a user of the party drug known as ‘poppers’ — and now Tory MP Crispin Blunt is taking his latest cause to a new high, as he’s due to jet off to Jamaica to address a conference on cannabis.

The MP for Reigate in Surrey — who supports more liberal drug laws — will be a delegate at Canex 2019, which brings together cannabis industry professionals from across the world in a bid to blow away traditional attitudes about the drug, which is said to have proven medicinal benefits.

‘The benefits of medicine from cannabis for all the world’s citizens have been postponed by over half a century as a consequence of attitudes from the Fifties,’ Blunt tells me.

‘The discussion is finally enabling evidence to cut through prejudice.’ Blunt, who came out as gay in 2010 and is the uncle of British actress Emily Blunt, told the House of Commons in 2016 that he would be ‘directly affected’ by a ban on legal highs, because he regularly uses ‘poppers’.

Retiring Bercow and wife go into business together

Paid £155,000 a year — more than anyone else in Parliament, including the Prime Minister — John Bercow is making plans ahead of his retirement as Speaker next month.

He has, I can disclose, established a new company called Fedhead Limited. The firm, which has not yet traded, lists its business, somewhat arcanely, as ‘other information service activities not elsewhere classified’.

There are just two directors: 56-year-old Bercow, who previously insisted he would stand down by June last year, nine years after his appointment, only to ‘reconsider’ — and his wife Sally, 49.

Bercow declined to comment on the nature of the business.