SEBASTIAN SHAKESPEARE: Whose side will Emma McQuiston take as her brother splits from his wife?

When Emma McQuiston married Viscount Weymouth in 2013, she became chatelaine of the fabulous Longleat House

When Emma McQuiston married Viscount Weymouth in 2013, she became chatelaine of the fabulous Longleat House — and also emulated the path taken by her much older brother, Iain, who married into the same aristocratic family more than two decades earlier. But part of the fairy tale has now unravelled.

For I can disclose that Iain, 58, and his wife, Lady Silvy Thynne, 61, younger half-sister of Emma’s late father-in-law, Alexander, Marquess of Bath, are now living apart.

‘This isn’t as either of them would wish it to be,’ a family friend tells me.

Silvy remains at the family home in Wiltshire and there are hopes for a reconciliation.

‘She’s a very sweet person and is very, very unhappy about it all. Iain’s struggling.’

When the couple, who have an adult son, Milo, and daughter, Eve, married in 1989, they brought together two extended and unconventional families.

On Iain’s side, one of the bridesmaids was his half-sister Emma, then just four years old, born to Iain’s mother, Suzanna, during the latter’s passionate if short-lived affair with Nigerian oil tycoon Ladi Jadesimi. But the McQuiston family tree was child’s play by comparison to Silvy’s.

Her mother, Virginia, had two much older daughters by a first marriage to David Tennant, son of the 1st Lord Glenconner. 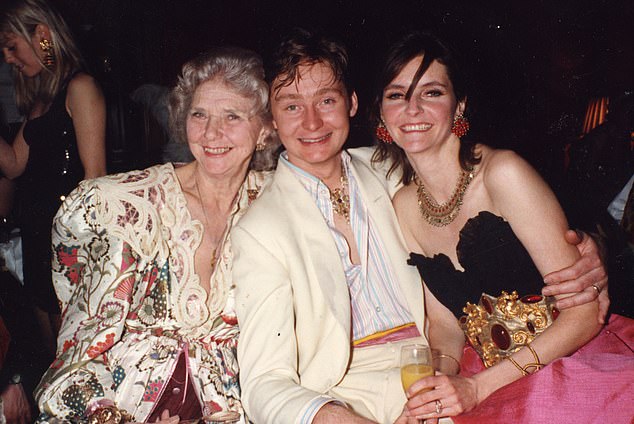 For I can disclose that Iain, 58, and his wife, Lady Silvy Thynne, 61, younger half-sister of Emma’s late father-in-law, Alexander, Marquess of Bath, are now living apart. Iain McQuiston is pictured above with his wife Lady Silvy Thynne, daughter of Lord Bath (Silvy McQuiston) and her mother Virginia

Her father, Henry, 6th Marquess of Bath, who shocked the aristocracy by establishing the safari park, also had children by a previous marriage — one daughter and four sons, of whom the eldest surviving one was Alexander. 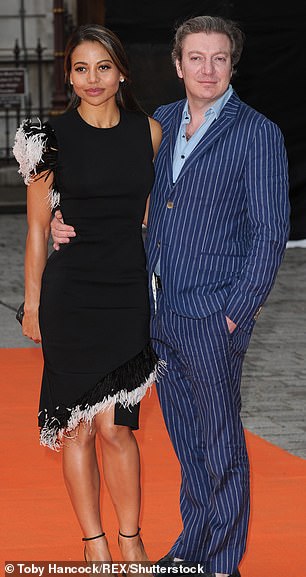 Emma Weymouth is pictured above with Ceawlin Thynn 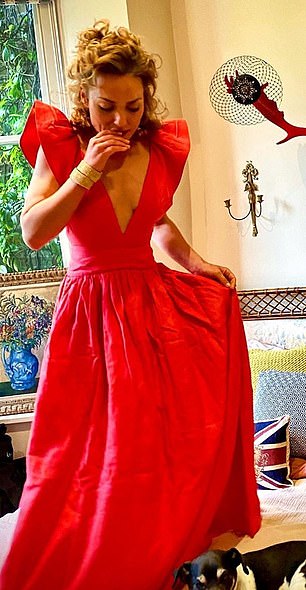 He was accompanied to Silvy’s wedding by his only son, Ceawlin, then 15, who, though neither could have known it, was to marry bridesmaid Emma 24 years later.

Since then, Emma has starred in Strictly, given birth to John, now five, and Henry, who is now three, and last month, on her father-in-law’s death, became the Marchioness of Bath.

So, despite the sadness now engulfing her brother, the McQuiston and Thynne dynasties remain entwined.

Iain declines to comment and Lady Silvy was unavailable.

Model Martha Sitwell might be unlucky in love but that hasn’t stopped her from sharing her pearls of wisdom with those attempting to date during lockdown.

The 39-year-old, whose ten-year marriage to baronet Sir George Sitwell she declared ‘pure misery’, and who split from Sotheby’s boss Lord Dalmeny last year, has been glamming herself up at her Kensington home in a bid to inspire hopeful romantics.

As well as posting pictures of herself in party dresses (right), she has made a video tutorial for those looking for a partner.

‘I’m going to give you five minutes on how I get ready for a Zoom date,’ she says. Her tips?

‘We’re going on a date — let’s have some red lipstick! I love L’Oreal. It smells like old ladies’ handbags.’

Atishoo! Radio 2 presenter Jeremy Vine has noticed how people react differently to him when he coughs or sneezes in public.

‘I walked into Radio 2 and coughed in reception,’ he says.

‘The reaction would have been less dramatic if I’d let off a fire cracker. And the sneezes!

‘I sneezed on my bicycle last week, and saw a woman yank her child into a shop doorway. They’d been walking towards me on a deserted street and were at least 50 yards away.

‘In the olden days — before coronavirus — if you got hit by a cloud of pollen and started spluttering, you’d be offered a clean tissue by a stranger. Now you’re offered a clean pair of heels. You could probably clear an entire postcode with one pollinated cough.’

Ab Fab star Joanna Lumley says that her education at a convent school outside Hastings prepared her for the rigours of lockdown.

At least lockdown means that she can enjoy more days with her conductor husband Stephen Barlow.

‘I’m not upset at all that I’m spending too much time at home because the travelling I usually do is for work,’ she says.

Two cheers for the Hurlingham Club, in South-West London, where the Duchess of Cambridge takes Prince George for tennis lessons. Play has now resumed on its 40 courts.

But some members are withholding the third cheer after learning that the club’s hierarchy has imposed a new rule.

‘We’re now forbidden from inviting non-members to play,’ one tells me. ‘Perhaps they are considered rather dirty.’

The club assures me that the ban is temporary. ‘We expect to welcome guests again when demand returns to more normal levels,’ adds a spokesman.

Who says Andrew Lloyd Webber is strait-laced? The composer has chosen Walk On The Wild Side, Lou Reed’s risque ode to New York’s transsexual ‘superstars’, for his Spotify Isolation playlist.

Lloyd Webber was particularly taken by a video for the song, choreographed by Arlene Phillips for Hot Gossip, the dance troupe which gave former wife Sarah Brightman her big break.

‘The video caused a huge furore. Everyone said it was too naughty for 6pm TV,’ the peer recalls. ‘It was just a bit rude. Dig it out.’

Graydon Carter’s Vanity Fair Oscar party was the hottest ticket in showbusiness. But life has changed since the bon vivant quit as the magazine’s editor after 25 years.

‘I’m not even invited to the Oscar party any more,’ says Carter, who makes another surprising admission.

‘I’ve never been a party person. Lockdown absolutely fits my temperament to a tee.’ 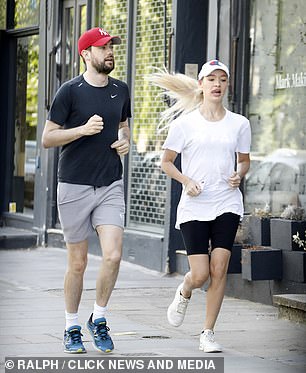 Funnyman Jack Whitehall seems to be getting serious about his new girlfriend, Roxy Horner

Jack’s love in a time of lockdown

Funnyman Jack Whitehall seems to be getting serious about his new girlfriend, Roxy Horner.

The 31-year-old is self-isolating at his home in West London with the British model, 28, who once dated Leonardo DiCaprio.

Proving inseparable, the pair have taken to jogging around the local streets together.

Titanic director James Cameron says he never cries in real life but tears well up when he is in front of a screen.

‘I have this theory: If I can’t make myself cry, how do I expect to make an audience cry?

‘One of the trickiest things as a film-maker is to stay emotionally available to your own movie. I don’t cry in real life, no matter how dire the situation. But I’ll cry in a movie. So to me a movie is a setting that gives to the tough, stoic alpha-leader permission to cry.’

The Duke of Kent’s granddaughters showed off their floral face masks this week as they posed in London.

It was shared online by aspiring fashion designer and Tatler cover star Lady Amelia, who says the ‘beautiful and reusable’ £19 Liberty print masks are made by the luxury cashmere brand Brora, which is donating £10 from every sale to the NHS. 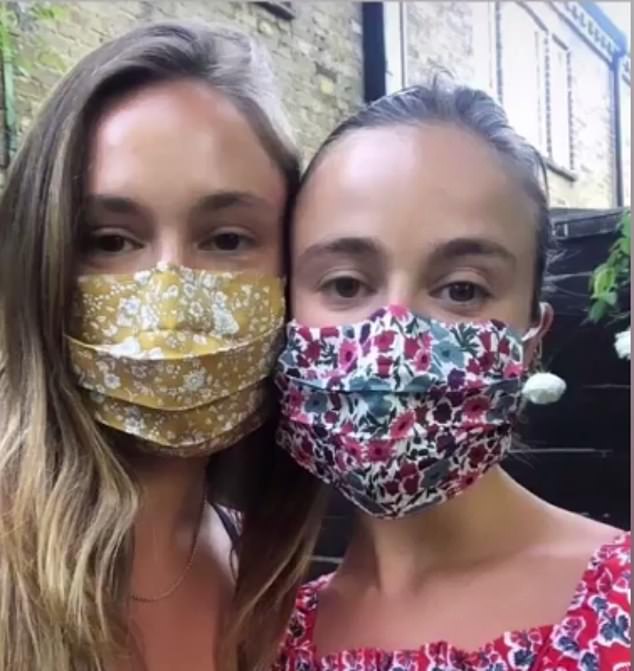