‘I have taken a lot of energy from the messages and handwritten letters I have received’: Sebastian Vettel says support from fans inspired him to end 392-day streak without an F1 win

Sebastian Vettel thanked friends and fans who sent handwritten notes of support during his long wait to sip the winner’s champagne again.

The quadruple world champion’s 53rd victory of his career came in Singapore after a 22-race drought and a fortnight after he finished out of the points – and crushed – at Ferrari’s home race in Monza.

But he drove cleanly around the Marina Bay Circuit on Sunday, capitalising on a strategy call that favoured him ahead of his Ferrari team-mate Charles Leclerc.

‘I still get mail, which some people might find hard to believe in this age of social media,’ said Vettel, 32. ‘Some are little notes, others handwritten letters. People make the effort. When I find a bit of time in the evening to go through them, it is really encouraging.

‘I have taken a lot of energy in the last couple of weeks from the messages I have received from the racing world, people I know, but especially fans – people sharing their own story of when things go up and things go down.

‘For us, everything is centred around racing but it isn’t the most important thing in the world. When you read the notes, you see people are struggling in life. Some are very intimate about it. It gets to me gave me a lot of confidence to keep on trying.’

Asked about his recent patchy form, the German said: ‘Nothing was wrong. I knew on my side that we just needed to keep doing the job and things would fall into place. I am happier it was sooner rather than later.’

There were three safety car phases and Vettel mastered the restart each time, which was more than recent form suggested could be counted on. 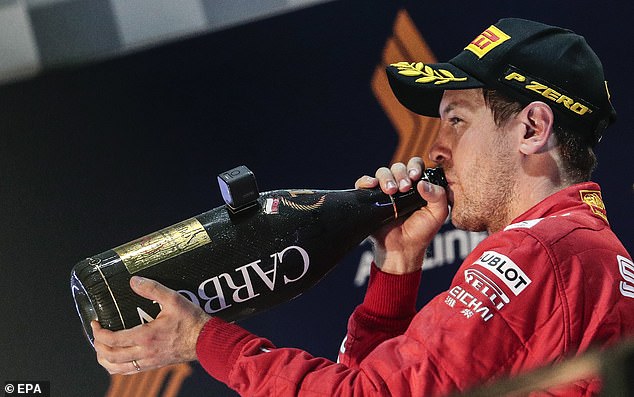