For Princess Beatrice, this was the ultimate ‘something borrowed’.

Fashion is so often used to make a statement and this gown, personally loaned by the Queen, sends a huge message of her support to a much-loved granddaughter on her wedding day.

The Queen Mary tiara – worn by the Queen when she married Prince Philip in 1947 and loaned to her only daughter Princess Anne on hers – also signifies the warmth of feeling. 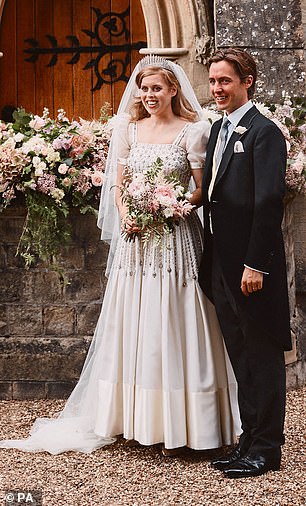 Queen Elizabeth II arriving at the Odeon in London’s Leicester Square for the Lawrence of Arabia film premiere on December 10, 1962 (left). The Queen is wearing the same Peau De Soie taffeta dress by Norman Hartnell that was worn by Beatrice on Friday (right)

Beatrice’s decision to get married in a second-hand gown is interesting and, I must say, pleasantly surprising and touching.

A very traditional design, it is beautifully crafted from peau de soie taffeta and features a geometric, chequered bodice encrusted with diamanté.

There have been amendments to the original, of course, to allow for Beatrice’s height and the modesty of a Royal bride in church. Angela Kelly, the Queen’s personal dresser, and Stewart Parvin, Her Majesty’s favourite dressmaker, remodelled and refitted the dress to Beatrice’s size and tastes.

A longer sleeve, for example, might have been more fashionable but then Beatrice has never been in thrall to fashion labels and the puffed organza sleeves show her playful style. A sleek trim of ivory Duchess satin at the bottom of the gown allows for added length.

The dress was designed by Sir Norman Hartnell and worn by Her Majesty at the 1962 film premiere of Lawrence Of Arabia at London’s Leicester Square Odeon where the Queen met leading man Peter O’Toole.

Hartnell had an astonishing rise to fame from creating uniforms for Selfridges ‘lift girls’ in the early 1920s to designing for royalty.

Besides designing two of the most important dresses of the 20th Century – the Queen’s wedding dress and the outfit for her 1953 Coronation – he is also credited with turning London into a fashion hub to rival Paris.

A patriotic choice for Beatrice, then, as well as a personal one. It also plays to the trend for vintage dresses and sustainable fashion. The bride doesn’t traditionally give a speech at her wedding but with this beautiful, romantic gown created 26 years before she was born, Beatrice spoke volumes. 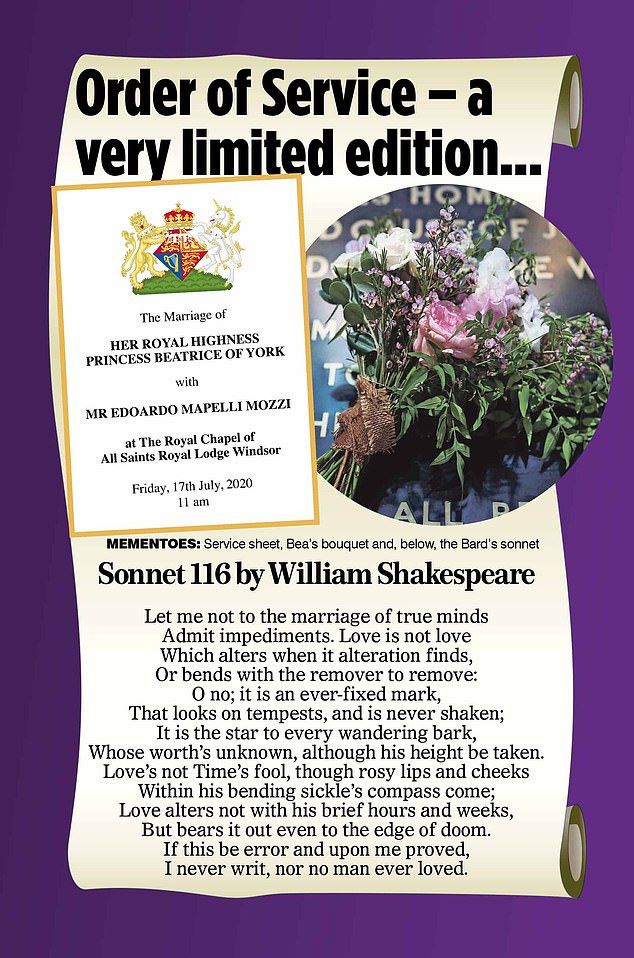 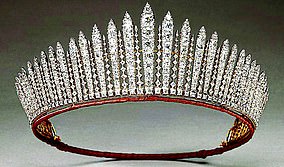 The Queen allowed her 31-year-old granddaughter, Princess Beatrice, to wear the same tiara she wore at her own wedding in 1947.

The Queen Mary diamond fringe tiara, fashioned in 1919 from a necklace given to the current Queen’s grandmother by Queen Victoria, is a treasured heirloom.

It was lent to the Queen, then Princess Elizabeth, as her ‘something borrowed’. But two hours before the ceremony, a hairdresser securing Elizabeth’s veil with the tiara snapped part of it.

The tiara was rushed to maker Garrard’s London workshop where it was hurriedly welded back together and returned just in time.

The tiara was also loaned to Princess Anne for her wedding to Mark Phillips in 1973, but has rarely been seen in public since. 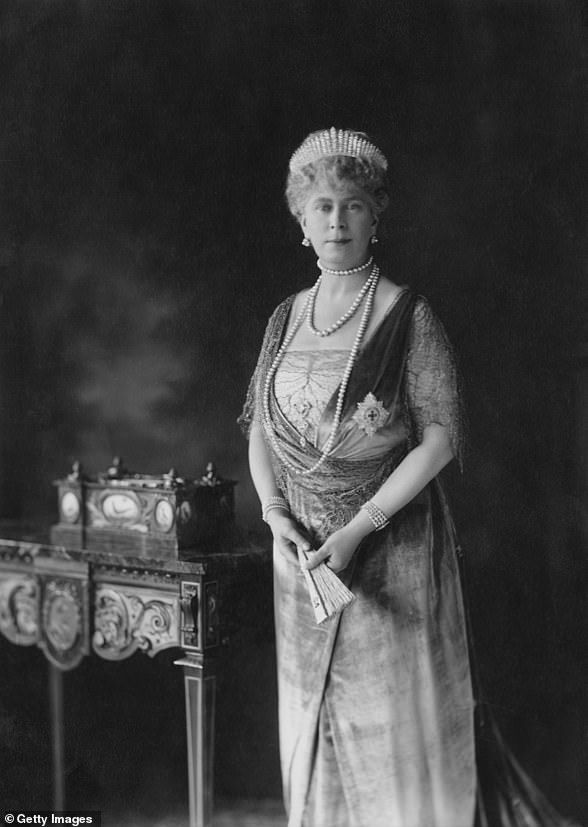 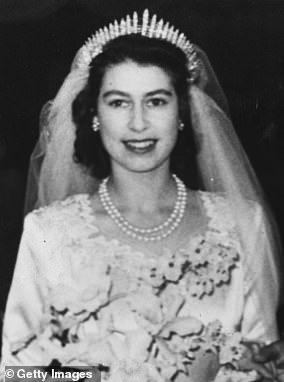 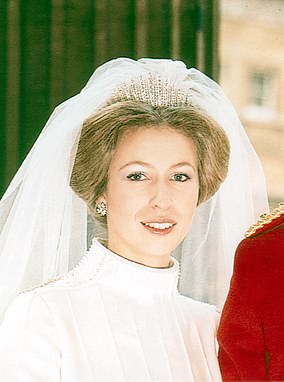 Dress was lent by the Queen

By Emily Andrews, Max Aitchison, Michael Powell and Scarlet Howes for the Mail on Sunday

The Queen lent Princess Beatrice the tiara that she wore at her own wedding and a vintage gown first worn to a glitzy film premiere almost 60 years ago.

In an astonishing double display of generosity, unmatched for any previous Royal bride, the monarch made every effort to ensure that her granddaughter’s wedding to Edoardo Mapelli Mozzi was an occasion for the couple to remember.

It was an acknowledgement not only that lockdown had denied Beatrice the wedding-day fanfare enjoyed by her sister Eugenie and cousins William and Harry, but also of the distress of seeing her father’s reputation wrecked by his links to paedophile Jeffrey Epstein. 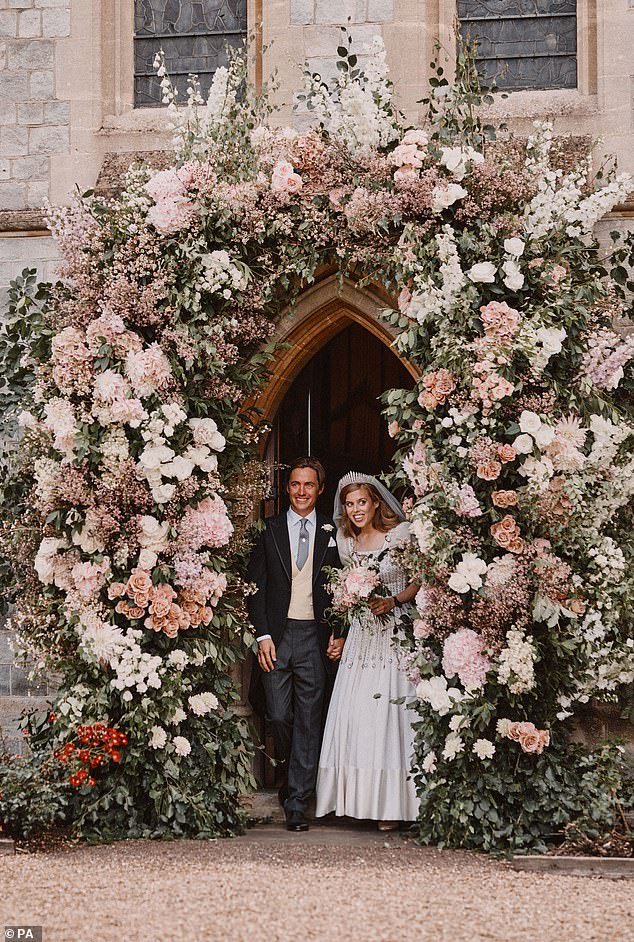 The wedding may have lacked pomp and pizzazz but it had intimacy, with 20 guests witnessing the couple exchange their vows.

Edo’s four-year-old son Wolfie served as both best man and page boy, while his niece Coco Yeomans, five, was a bridesmaid alongside her pageboy brother Freddie, three.

The party-loving Yorks ensured a high-spirited reception, featuring speciality cocktails, bespoke catering, an exquisitely decorated Indian-style tent, a bouncy castle and glamping pods for overnight guests. Beatrice was said to be ‘thrilled and super-excited’, telling a friend: ‘It’s been such a whirlwind.’

While the wedding was arranged amid huge secrecy, The Mail on Sunday can today reveal the inside story…

HOW THE MUMS LEAPT INTO ACTION

During lockdown, Beatrice had been staying with Edo and her future mother-in-law in the £2 million Cotswold house Nicola shares with sculptor husband David, Edo’s stepfather. The young couple were ‘desperately sad’ that plans for a wedding at St James’s Chapel Royal in May with 150 guests and a reception at Buckingham Palace had to be cancelled, and resolved to marry ‘whenever possible’. 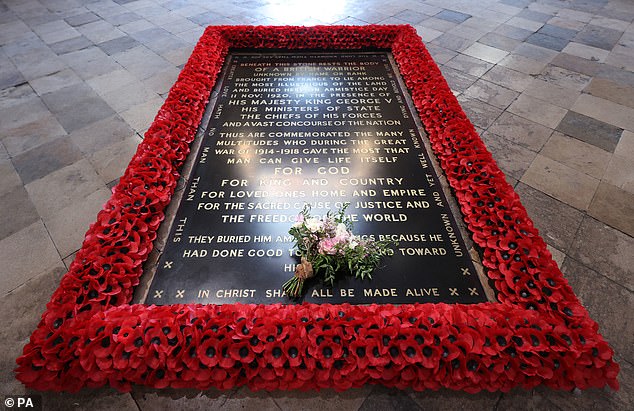 Beatrice and Edo broke with tradition by spending the night before the wedding together.

The secluded Chapel of All Saints is opposite Royal Lodge, so Prince Andrew walked the bride to the church and down the aisle. The Queen and Prince Philip had slipped in a through a side entrance, thus maintaining social distancing. The church was decorated with pink and white delphiniums, roses, waxflower and hydrangeas from Windsor Great Park.

Beatrice carried a bouquet of trailing jasmine, pale pink and cream sweet peas, royal porcelain ivory spray roses, pink O’Hara garden roses, pink waxflower, baby pink astilbe and sprigs of myrtle. During the 30-minute service, Sarah Ferguson and Mrs Williams-Ellis read the bride and groom’s favourite poems: I Carry You In My Heart by E E Cummings and Shakespeare’s Sonnet 116. There was no singing, but a selection of music was played together with the National Anthem.

Later, wedding photographs were taken, including two released to the media yesterday. Neither features Andrew.

The wedding breakfast was in a blue-and-white themed open-sided luxury Indian tent at Royal Lodge. Society caterers Spook London provided canapes and a sit-down lunch with wine and champagne. 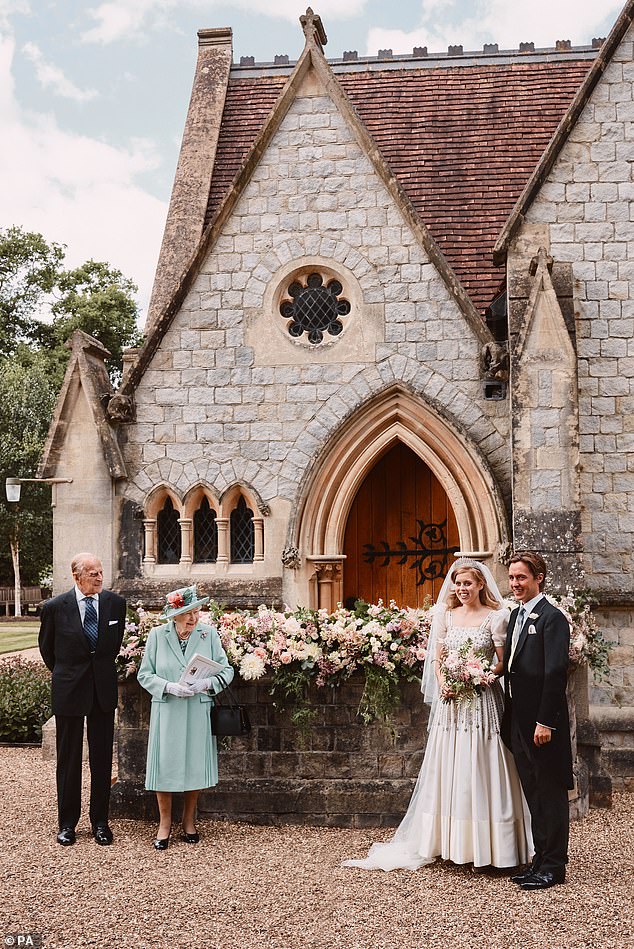 The secluded Chapel of All Saints is opposite Royal Lodge, so Prince Andrew walked the bride to the church and down the aisle. The Queen and Prince Philip had slipped in a through a side entrance, thus maintaining social distancing

Andrew and Edo gave speeches and the newlyweds enjoyed their first night together as man and wife in a special glamping pod.

Edo and Bea are not thought to have any immediate honeymoon plans and hope to celebrate their wedding later in the year with a ‘huge party’.

A friend said: ‘They are just delighted they could marry in front of their family and closest friends. It was particularly special that the Queen and Duke could come.’

He was wearing a rugby-style jersey emblazoned with the Order of the Garter motto: Honi soit qui mal y pense – meaning ‘May he be shamed who thinks badly of it’.