A second teenager has been charged with the murder of a man who was stabbed after he ‘asked drug dealers to move on’ outside Parsons Green Tube station.

Shafiq Smith, 18, of Brudenell Road, south-west London, also faces charges of attempted murder and threatening a person with a bladed or pointed article in a public place.

He has been remanded in custody and is due to appear at Wimbledon Magistrates’ Court on Saturday.

Omid Saidy, 20, was killed outside the London station on Monday, where 30 people were injured in a terror attack last month.

He was knifed after asking a drug dealer and another man to leave the area, Metropolitan Police said.

Mr Saidy, from Fulham, was pronounced dead in Parsons Green Lane at 8.30pm.

A 16-year-old boy, who cannot be identified, has also been charged with murder and threatening another man with a knife.

He appeared in custody at Wimbledon Youth Court on Thursday. 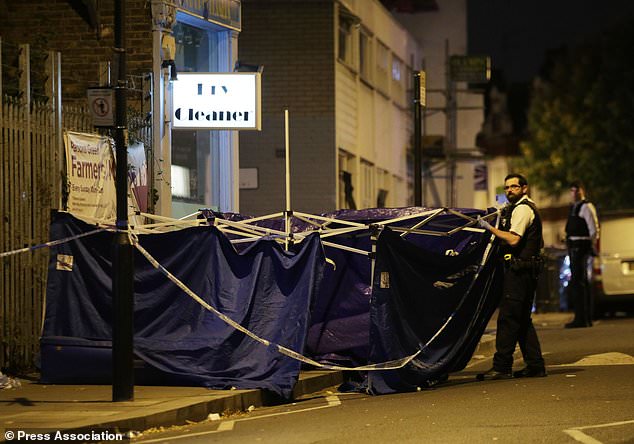 Mr Saidy was stabbed in Parson’s Green, pictured, after he asked drug dealers to move on

The teenager, from Durham, was injured during the attack and was arrested after being released from hospital.

He was remanded in custody and ordered to appear at the Old Bailey on October 23.

An 18-year-old man, a friend of the victim who arrived on a moped, was also stabbed in the incident and is still in hospital with serious injuries, police said.

He has been arrested on suspicion of affray.

Two females and another male who were arrested at the same time as Smith, on suspicion of assisting an offender, have been released under investigation.