Scientists have a new understanding about supermassive black holes thanks to data gathered by the Green Bank Telescope in West Virginia.

Supermassive black holes are located deep within the center of galaxies in areas where temperatures run up to 50 million degrees Celsius. The black hole will sometimes reheat the gas surrounding it in violent bursts – ‘burps’ – from its center.

These gas jets carve out immense cavities within the hot cluster, which then pushes hot gas farther from the center and replaces it with radio-emitting bubbles. If they can learn more about what’s left behind filling in these cavities, scientists can begin to understand what made them in the first place.

‘We’re looking at one of the most energetic outbursts ever seen from a supermassive black hole,’ Jack Orlowski-Scherer, lead author on this publication and a research fellow at McGill University in Montreal, Quebec, said in a statement. ‘This is what happens when you feed a black hole and it violently burps out a giant amount of energy.’

In a new paper published in the journal Astronomy & Astrophysics that analyzes the galaxy cluster MS0735, a team of astronomers used an instrument known as MUSTANG-2 on the Green Bank Telescope (GBT) in West Virginia to image the cluster in a unique way that distorts the cosmic microwave background.

The cosmic microwave background was emitted 380,000 years after the Big Bang and is considered to be the afterglow of our universe’s birth 13.8 billion years ago.

These new findings reinforce previous discoveries that at least a portion of the pressure support in the cavities is due to non-thermal sources, such as other types of particles, cosmic rays and turbulence, and potentially a small contribution from magnetic fields.

Unlike previous research, new imaging produced by the GBT considers the possibility that the pressure support within the bubbles could be more nuanced than previously thought, mixing both thermal and non-thermal components.

‘With the power of MUSTANG-2, we are able to see into these cavities and start to determine precisely what they are filled with, and why they don’t collapse under pressure,’ explains Tony Mroczkowski, an astronomer with the European Southern Observatory who was part of this new research.

‘We knew this was an exciting system when we studied the radio core and lobes at low frequencies, but we are only now beginning to see the full picture,’ says co-author Tracy Clarke, an astronomer at the U.S. Naval Research Laboratory and VLITE Project Scientist who co-authored a previous radio study of this system.

Future observations across multiple frequencies can establish more precisely the nature of how exotic the black hole eruption is. 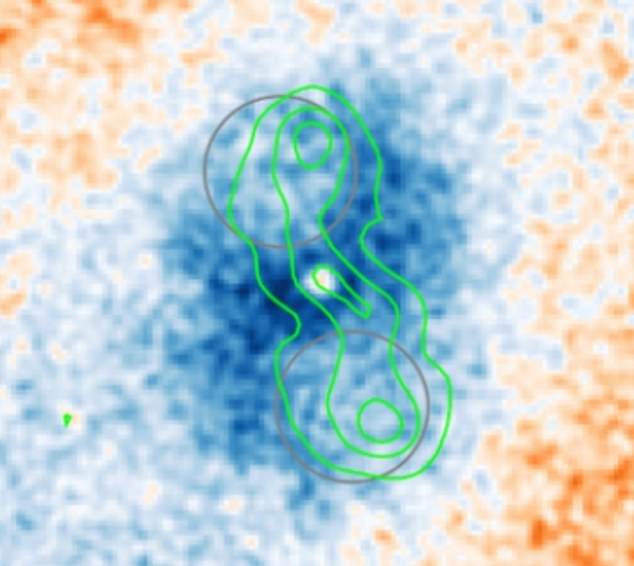 ‘We knew this was an exciting system when we studied the radio core and lobes at low frequencies, but we are only now beginning to see the full picture,’ says co-author Tracy Clarke, an astronomer at the U.S. Naval Research Laboratory and VLITE Project Scientist who co-authored a previous radio study of this system