See, this is genetics and ‘elite’ training in action! Jessie James Decker boasts about her daughter

Jessie James Decker took to Instagram on Sunday to boast about her daughter Vivianne’s gymnastics win, days after hitting back at critics over a viral snap that showed her children with defined abs.

In a video of the eight-year-old performing the beam routine, she pointedly wrote: ‘Ab-solutely crushed it.’ 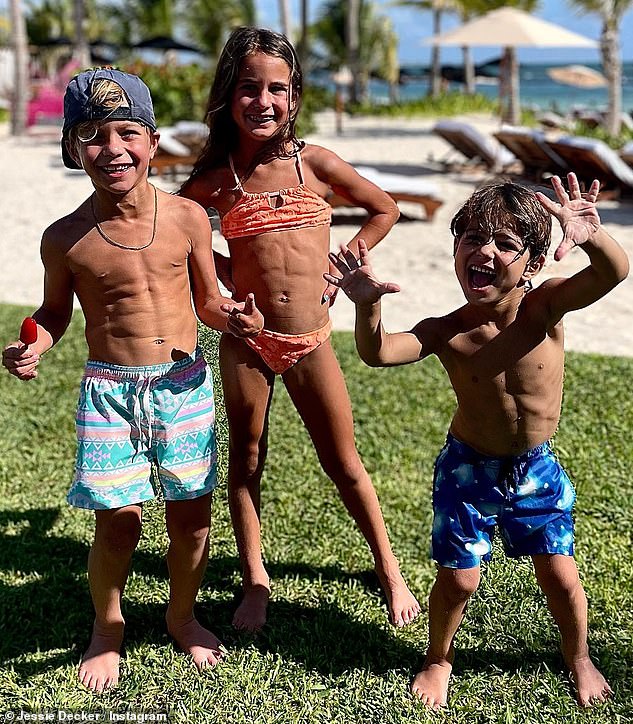 The photos led to many supportive — and some far less supportive — comments. Jessie responded to a couple of the more critical ones.

The I Still Love You Singer responded with, ‘It’s a sad world we live in today when having healthy fit kids who are super active, play sports [and] build muscle naturally is ‘weird.”

Another person called the children having abs ‘strange’ to which the wife of Eric Decker responded, ‘From one mother to another. Please don’t call my children’s appearance strange just because they don’t look the way you think they should?’ 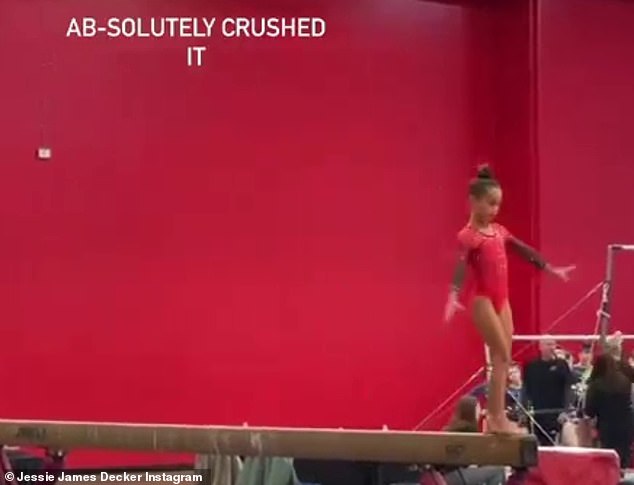 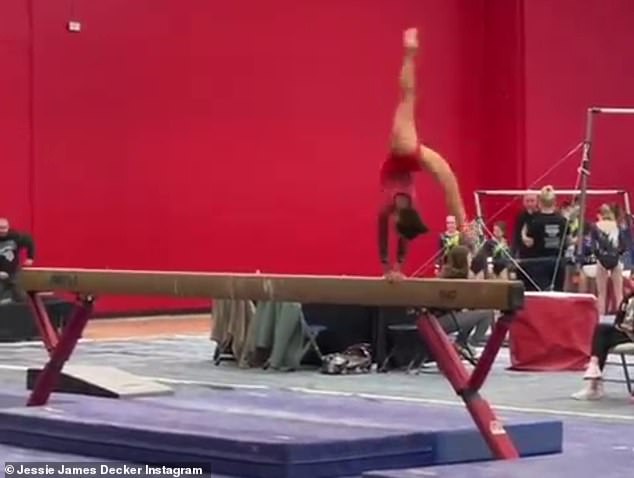 Online negativity: This comes after online trolls said Decker’s children look ‘weird’ because they were too muscular

She later addressed the matter in a social statement, insisting that her children’s muscular appearance was the result of genetics and ‘elite’ competitive training.

She wrote: ‘I didn’t plan on addressing this because it’s bonkers but the photos are out there and every single news outlet has posted about this. When I posted the pix of our vacation and included the kids being silly flexing on the beach on our thanksgiving trip I had NO clue it would get the reaction it did,’

‘But being accused of photoshopping abs on my kids (I can’t help but laugh) or … the polar opposite over ”overtraining” our kids makes me realize how bizarre our world has gotten regarding the body and what’s normal and what’s not. We preach about body positivity and acceptance but my kids having a mass amount of genetic and built muscle from athletics is ”weird”?,’ she added for her roughly 4.2 million followers.

‘I want to raise my kids to feel proud of their bodies and hard work from either Vivis elite competitive gymnastics to Eric Jr wanting to be like dad as an NFL receiver to little Forrest who spends hours dancing his heart out. Let’s not pick and choose what we normalize regarding bodies and be accepting of all people and children.

‘If we wanna do ‘better’ then do better. I’m proud of my children and encourage them to live their dreams. So we’ll see y’all at the 2032 Olympics, and wearing Bubbys jersey in the stands and dancing at Forrests rock concert,’ Jessie concluded along with a peace sign emoji. 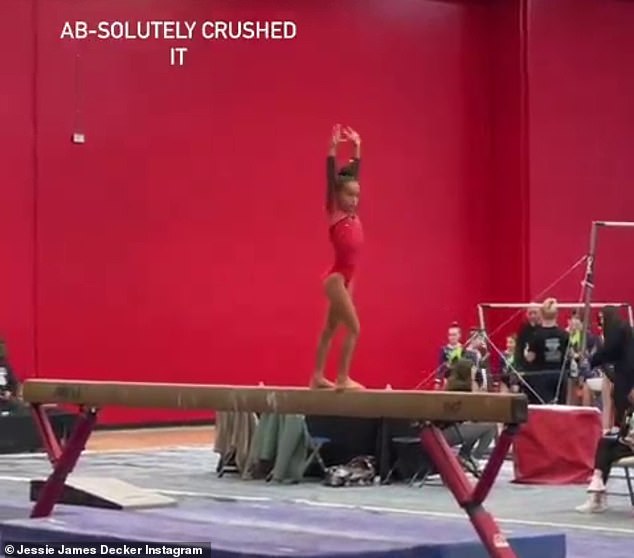 She’s got it: Vivi balanced with her arms straight up as she prepared for another handstand 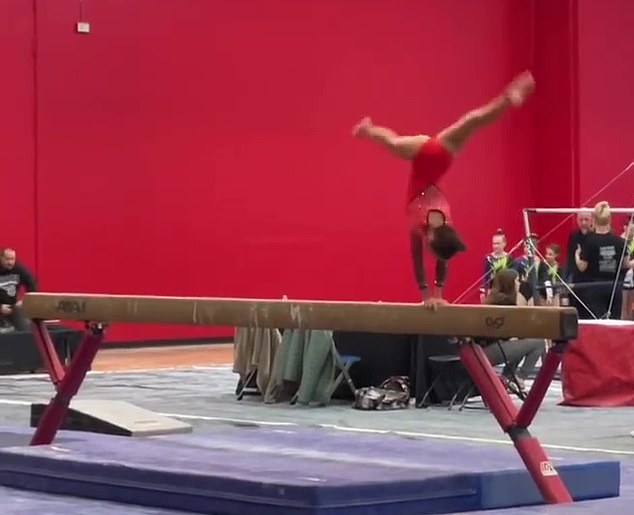 The Flip My Hair songstress is coming off the release of her latest EP The Woman I’ve Become, which dropped just over a year ago, though she has released multiple singles in 2022.

Her most recent song, the Billy Currington collaboration I Still Love You, came out in October.

She seems to be taking her time with a full-length release, however, as her last LP — a Christmas album — was put out in 2018.

Jessie recently competed on Dancing With The Stars, but her tenure on the competition ended late last month when she was voted out after finishing in the bottom two during Michael Bublé night. 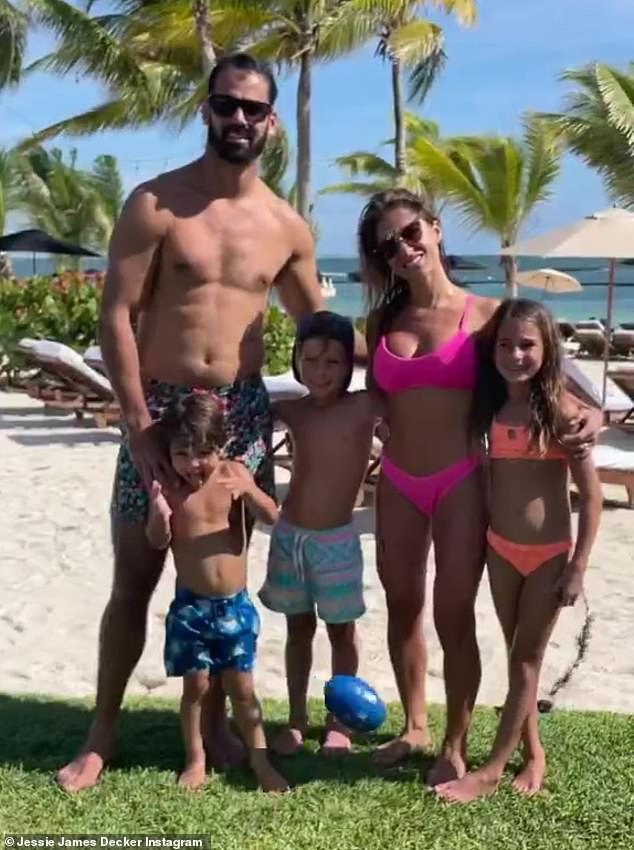 Fit family: Jessie and her husband Eric Decker, who played in the NFL from 2010 through 2018, spent  Thanksgiving in Hawaii