A revolutionary drug that works like a guided missile to kill off tumour cells could transform cancer treatment for thousands of British patients.

The seek-and-destroy drug is injected into the bloodstream and immediately homes in on malignant cells while leaving healthy ones unscathed.

NHS scientists trialling the ground-breaking medicine predict it could offer a precious lifeline to seriously ill patients with non-Hodgkin’s lymphoma – a type of cancer that affects the immune system – who have failed to get better on any existing treatments. Some have gone into complete remission, meaning there is no sign of the cancer in their bodies.

‘The early results are very promising,’ says Professor John Radford, director of research at the Christie NHS Foundation Trust in Manchester, where the drug is being tested.

The antibody drug is injected and once the antibodies have hunted down the cancer cells, they lock themselves on to them

‘And we are talking about patients with very few options left. For a drug to be this effective in patients who have not responded to other treatments is quite special. We didn’t know if they would even find it tolerable, let alone if it would work, so these results are very exciting.’

Non-Hodgkin’s lymphoma affects nearly 14,000 people a year. Almost 5,000 a year die from the disease. It begins when malignant cells form in the lymph nodes – tiny glands in the armpits, groin and neck that play an important part in the body’s defences by circulating infection-fighting cells, called lymphocytes, around the body.

The first sign is often a painless swelling in the neck or groin but the disease can cause cancerous growths anywhere in the body.

Some tumours develop very slowly over many years and result in few symptoms. Others are aggressive and fast-growing, needing urgent treatment.

Chemotherapy and radiotherapy are the main weapons doctors currently use. Some patients will also be treated with a drug called rituximab, which works by telling the immune system to attack and destroy cancer.

However, chemotherapy is so toxic that it wipes out healthy cells as well as cancerous ones – causing debilitating side effects such as extreme fatigue, nausea and hair loss – while radiotherapy alone may not be enough to tackle the disease.

Rituximab works by attaching itself to cancer cells and killing them. But it also latches on to healthy cells, attacking them too. Once the treatment is over, the healthy cells grow back.

The new guided-missile drug, codenamed ADCT-402, could be much more precise because the cancer-killing element – a drug called loncastuximab tesirine – is attached to an antibody before it is injected. 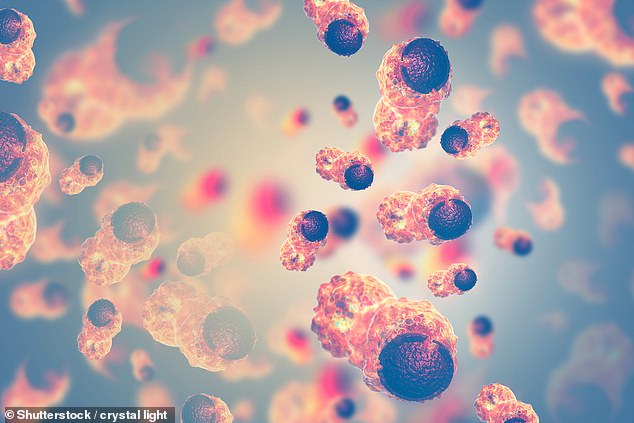 Antibodies are proteins in the blood that attach themselves to foreign or invading cells, such as viruses or bacteria, so the immune system can identify them and destroy them.

In this instance, scientists used an antibody which is only attracted to non-Hodgkin’s lymphoma cells, working a bit like a missile guidance system.

Once the antibody has hunted down the cancer cell, it locks on to it and dumps its payload inside, where the active drug then attacks the cell’s DNA, effectively killing it.

The new drug is given through a drip into a vein in the arm once every three weeks. Early results from a major international trial, of which the Christie Hospital is part, were recently presented at a conference in Switzerland. Out of 129 severely ill patients, 44 per cent went into partial or complete remission. ‘Chemotherapy destroys everything in its path,’ says Prof Radford. ‘But this drug is specifically targeted at lymphoma cells.’

Jim Teasdale, 71, was one of the first patients in the UK to benefit. The retired college principal, from the Wirral, was diagnosed with non-Hodgkin’s lymphoma five years ago when he suffered prolonged bouts of abdominal pain and extreme fatigue. His GP initially suspected a tummy upset, but when the pain persisted for several weeks, father-of-two Jim sought a second opinion. A subsequent biopsy confirmed he had non-Hodgkin’s lymphoma in his abdomen, one of the areas where the disease can start.

The cancer cleared up after a course of chemotherapy and Jim and his wife Julie, 60, went back to enjoying their active lifestyle of cycling and long country walks. But the disease returned in 2017, leaving the couple devastated. ‘I felt numb,’ says Jim, who also has four grandchildren. ‘And Julie took it even worse.’

Despite more chemotherapy, the cancer grew and Jim had nearly run out of options.

But earlier this year, Prof Radford offered him the chance to take part in the trial on ADCT-402. After nine injections of the drug, Jim is in complete remission, with scans showing the tumours are nowhere to be seen.

Jim says: ‘It’s been amazing. ‘The side effects are minimal compared to chemotherapy and I’m now enjoying life again, travelling with my wife, fell-walking and having our weekly date night. It’s no exaggeration to say the team at the Christie Hospital have saved my life.’

The trial Jim was on has now ended. A list of trials recruiting patients for other non-Hodgkin’s lymphoma treatments is available at cancerresearch.org.uk.