A set of bright pink seesaws is uniting children on the US-Mexico border as President Donald Trump wants to build a wall along the entire 2,000-mile boundary.

The seesaws were installed at the border fence separating Sunland Park, New Mexico, and Ciudad Juárez in Mexico on Sunday.

The scheme was devised by Ronald Rael, an architecture professor at the University of California, and San Jose State design associate professor Virginia San Fratello.

Images and video on social media show adults and children divided by the fence playing on them, with the children laughing and having fun.

Children play seesaw installed between the border fence that divides Mexico from the United States in Ciudad de Juarez, Mexico on Sunday 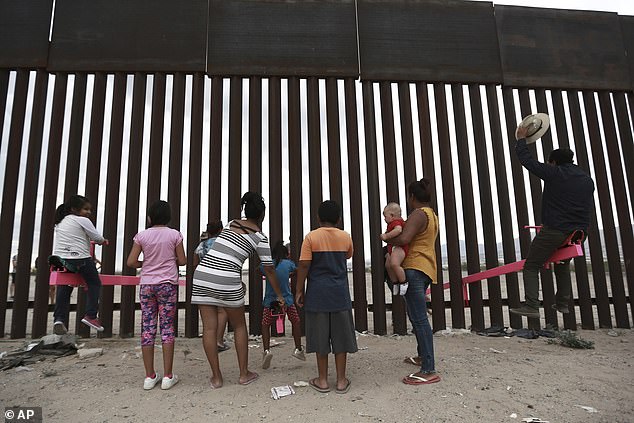 In an Instagram post, Rael said: ‘The wall became a literal fulcrum for the US-Mexico relations, and adults were connected in meaningful ways on both sides with the recognition that the actions that take place on one side have a direct consequence on the other side.’

However the children can see each other between gaps in the slats which form the wall.

The seesaw initiative was first developed in 2009 when the pair produced designs for a scheme known as the Teetertotter Wall.

By late Monday, video of the seesaw project was widely shared on social media, with people praising the project as a ‘beautiful reminder of the connection we share as humans, regardless of the borderlines drawn between us.’

Mexican TV star Mauricio Martíne shared video of the seesaw installation to Twitter, saying ‘What happens on one side impacts the other.’

The Texas-based Refugee and Immigrant Center for Education and Legal Services (RAICES) also praised the border wall installation as a powerful reminder that ‘we are all one.’ 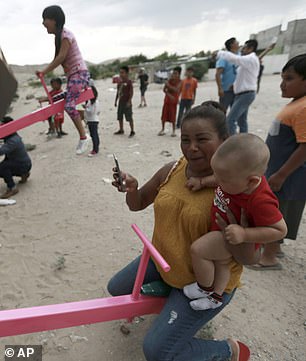 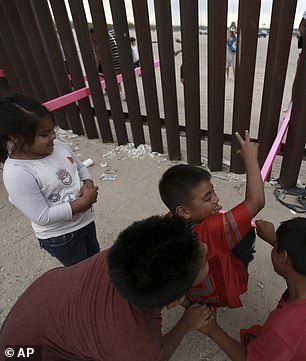 A mother and her baby play on a seesaw, (left), installed between the steel fence, while a boy is pushed on the device by his brother on the Mexican side of the border wall on Monday

‘Art is such a powerful vehicle for change,’ RAICES said in a tweet. ‘A beautiful installation at our southern border reminds us that: ‘Actions that take place on one side have direct consequences on the other,’ it added.

Last week, the US Supreme Court has cleared the way for the Trump administration to use billions of dollars in Pentagon funds to build sections of a border wall with Mexico.

Funding for the projects had been frozen by lower courts while a lawsuit over the money proceeded.

The case the Supreme Court ruled in began after the 35-day partial government shutdown that started in December of last year.

Trump ended the shutdown in February after Congress gave him approximately $1.4 billion in border wall funding.

But the amount was far less than the $5.7 billion he was seeking, and Trump then declared a national emergency to take cash from other government accounts to use to construct sections of wall.

The case before the Supreme Court involved just the $2.5 billion dollars in Defense Department funds, which the administration says will be used to construct more than 100 miles of fencing.