She has been out of the spotlight since checking into a mental health facility after suffering an emotional breakdown in September.

But now, more two months later, and Selena Gomez has been released from the hospital and is looking happy and healthy.

On Tuesday her good friends, Connar Franklin and Bailee Madison, shared several pictures of their ski-tubing trip to Big Bear, California, which is about 95-miles from Los Angeles.

Her outing came as sources revealed that the Disney alum is ‘feeling much better and looking forward to getting back to normalcy,’ according to People.

She’s back: Selena Gomez enjoyed a snow date with friends Connar Franklin (l) and Bailee Madison (r) in what are the first photos of the superstar since she entered a hospital in October

In one snap, Selena can bee seen sandwiched between her two friends as they lean in on her while ski-tubers shoot down the hill in the background.

Soaking in the sun and the snow, the 26-year old superstar look fresh and relaxed dressed in a long black jacket, black knit beanie, black sweatshirt and black furry boots.

It was hard to overlook the big beaming smile on her face, especially in light of her recent struggles.

Selena’s enthusiasm was off the charts in a photo that shows her yelling out with joy, standing to the right of her three friends at the bottom of a ski-tube run. 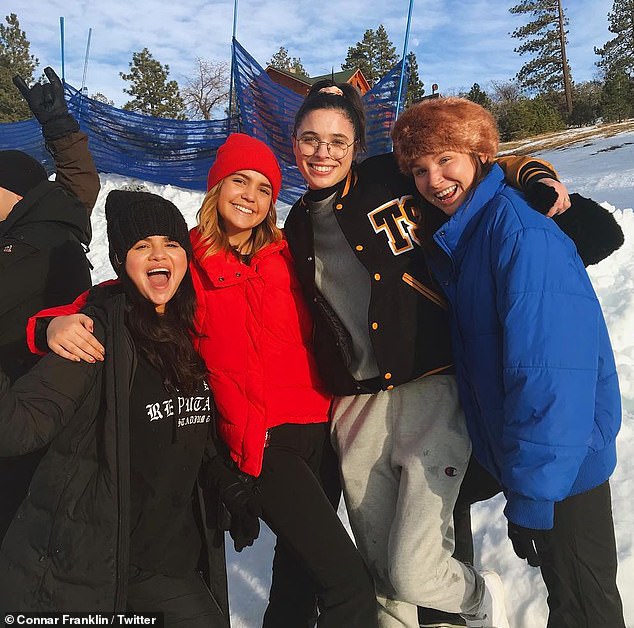 Healthy and happy: Selena’s enthusiasm is off the charts in a photo that shows her yelling out with joy, standing to the right of her three friends 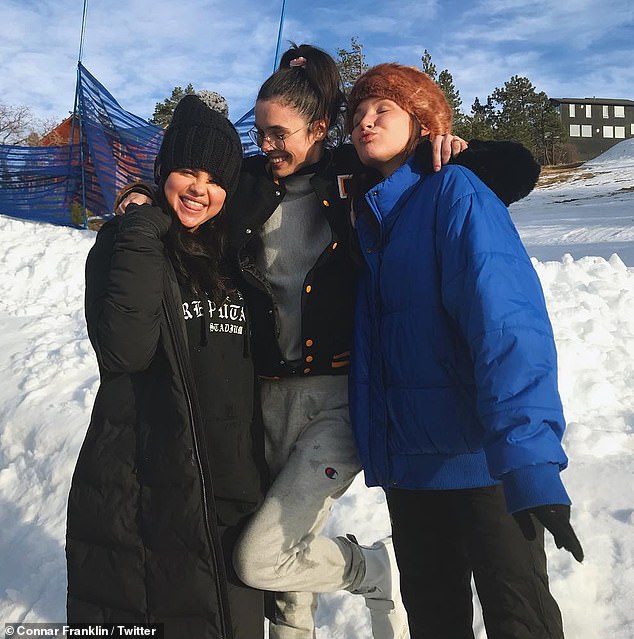 Playful: Selena and Connar appear to be egging each other on in another sweet snap; the singer/actress checked herself into a mental health facility in October after two health scares

She and Connar appear to be playfully egging each other on in another sweet snap.

There’s also a group shot that shows almost every with their hands in the air, and others clutching a tube.

‘She’s feeling much better and looking forward to getting back to normalcy,’ a source told People. ‘She’s spending time with friends and family.’

The former Disney star checked into a hospital twice in early October for a low white blood cell count, which can be a side effect for kidney transplant recipients like Selena. 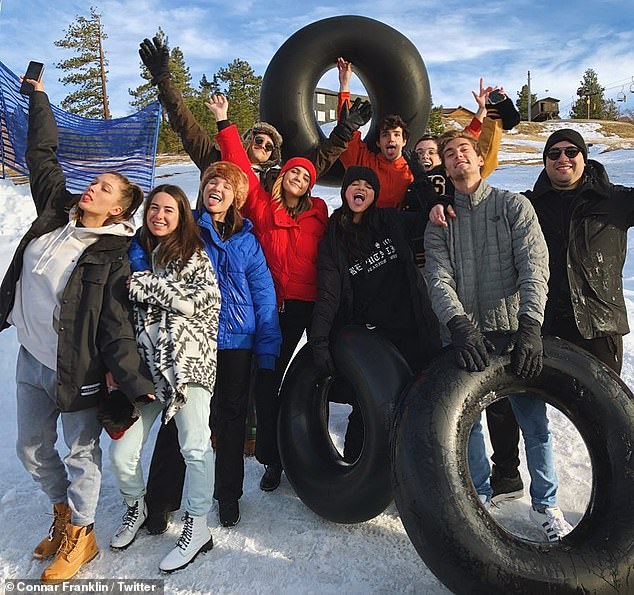 Say cheese: the group showed their enthusiasm in this snap at the bottom of a tube run; Selena had a kidney transplant in 2017, which was a side affect from her battle with Lupus

Making matter worse, she was also battling anxiety and depression during that second visit to the hospital.

Not long after her second health scare, she flew back east and checked into a treatment center.

Selena underwent a kidney transplants due to her ongoing battle with lupus.  She first revealed that she underwent chemotherapy to treat the disease back in 2015.

Lupus is a collection of autoimmune diseases in which the human immune system becomes hyperactive and attacks healthy tissues. Symptoms can affect joints, blood cells, heart, lungs and, in Selena’s case, kidneys.