Is this the next big pensions crisis? Self-employed pension savings hit record lows – and that’s even before the pandemic hit

Self-employed pension savings levels hit record lows in the year before the pandemic, the latest figures from HM Revenues suggest.

Despite more and more people working for themselves in recent years, the amount paid into personal pensions by this growing army of workers has been declining over the past two decades.

Some £830million was paid by self-employed workers into personal pensions in the financial year of 2019/2020, down from £1.15billion the year before, and the lowest on record.

The fall in contributions refers to the fiscal year ending in April 2020, which does not capture the effect of consecutive lockdowns that forced many people to stop working.

The figure for the Covid year of 2020-2021 will very likely show an even bigger drop in pension savings among the self-employed, considering that many could not even access Government help if they were left without work due to Covid.

A recent survey of self-employed workers by financial adviser website Unbiased showed that half of those who had been saving into a pension before the pandemic either cut or suspended contributions in response.

Understandably, those who run their own businesses have looked to batten down the hatches – and often, it has been the contributions they make into a pension that have been one of the ‘overheads’ to be sacrificed.

‘Given the number of self-employed workers has been spiking over the last two decades, the fact the amount being saved in pensions has fallen dramatically among this section of the labour market is both counter-intuitive and extremely worrying,’ said Tom Selby, head of retirement policy at AJ Bell.

I’m self-employed and want to set up a pension – how do I get started?

This is Money’s pension columnist, Steve Webb, replies to a reader about what steps to take here.

Kate Smith, head of pensions at financial firm Aegon, explains how to save for old age after setting up in business for yourself here.

HMRC figures show that personal pension contributions by the self-employed has been declining over the past twenty years.

That’s despite a steady increase in the number of people deciding to go freelance in recent years.

By the last quarter of 2019, there were more than 5million self-employed people in the UK, up from 3.2million in 2000, according to data by the Office for National Statistics.

And those working for themselves have contributed strongly to employment growth in the labour market, representing 15.3 per cent of those in employment, up from 12 per cent 20 years ago.

While all eligible employees are automatically signed up to a workplace pension, the self-employed have to set up a pension plan themselves.

As a result, 88 per cent of employees are saving into a pension, compared to just 14 per cent of the self-employed, recent figures show.

Last year, the Institute for Fiscal Studies found that just one in five of the UK’s self-employed were saving into a pension compared to 48 per cent two decades ago. 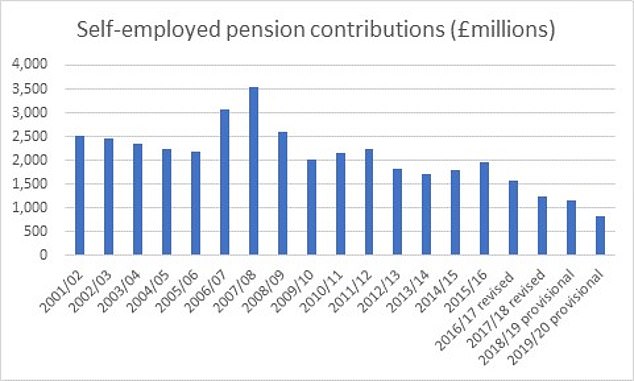 Pension contributions paid by the self-employed have been declining in the last two decades (Source: AJ Bell / HMRC)

‘While automatic enrolment has been successful in boosting pension saving among employed workers, it does precisely nothing for the self-employed,’ Selby noted.

‘The Government has previously promised to extend the principles of auto-enrolment to the self-employed, but so far we have seen little by way of progress.

‘Without a nudge into a pension scheme and a matched contribution, it is hard to see how policymakers can dramatically move the dial on self-employed retirement saving.

‘People are always looking for the next big pensions crisis – this could be it.

‘If the Government doesn’t step up and do something to boost savings levels among the self-employed, there risks being millions of people facing retirement disaster in the not-too-distant future.’