A self-styled multi-millionaire foreign exchange dealer who brags on TikTok about how he treats parking tickets as the cost of ‘VIP parking’ has been behind a string of dissolved companies and lives in a rented house.

MailOnline can also reveal that one of the directorships listed for Luke Desmaris, 27, at Companies House gives his ‘correspondence address’ as the home of an elderly couple who live in an isolated gated bungalow and have never heard of him.

Desmaris, who charges people for advice on how to make a fortune, made headlines this week after releasing a boastful TikTok video showing parking tickets on his BMW on double yellow lines near Harrods as a voiceover says: ‘Broke people see a fine, but I see VIP parking’.

Many of his videos feature the exterior of his former five bedroom home and his £90,000 BMW M4 car in Harlow, Essex, with some posing the question: ‘How can I afford this house and car age 27?’

But MailOnline can reveal that that Land registry records confirm he never owned the house and was renting it for just over a year, according to neighbours, before moving out earlier this month after his landlord decided to sell it.

The new owner of the house said: ‘He moved in while we were in the process of buying it. He did not own the house. We still wanted the property so we put up with it. The purchase has now been completed and he has moved out.’

Companies House records reveal that Desmaris is also a former director of four companies which have been dissolved without revealing any financial accounts.

Self-styled multi-millionaire foreign exchange dealer Luke Desmaris, who brags on TikTok about how he treats parking tickets as the cost of ‘VIP parking’, has been behind a string of dissolved companies and lives in a rented house 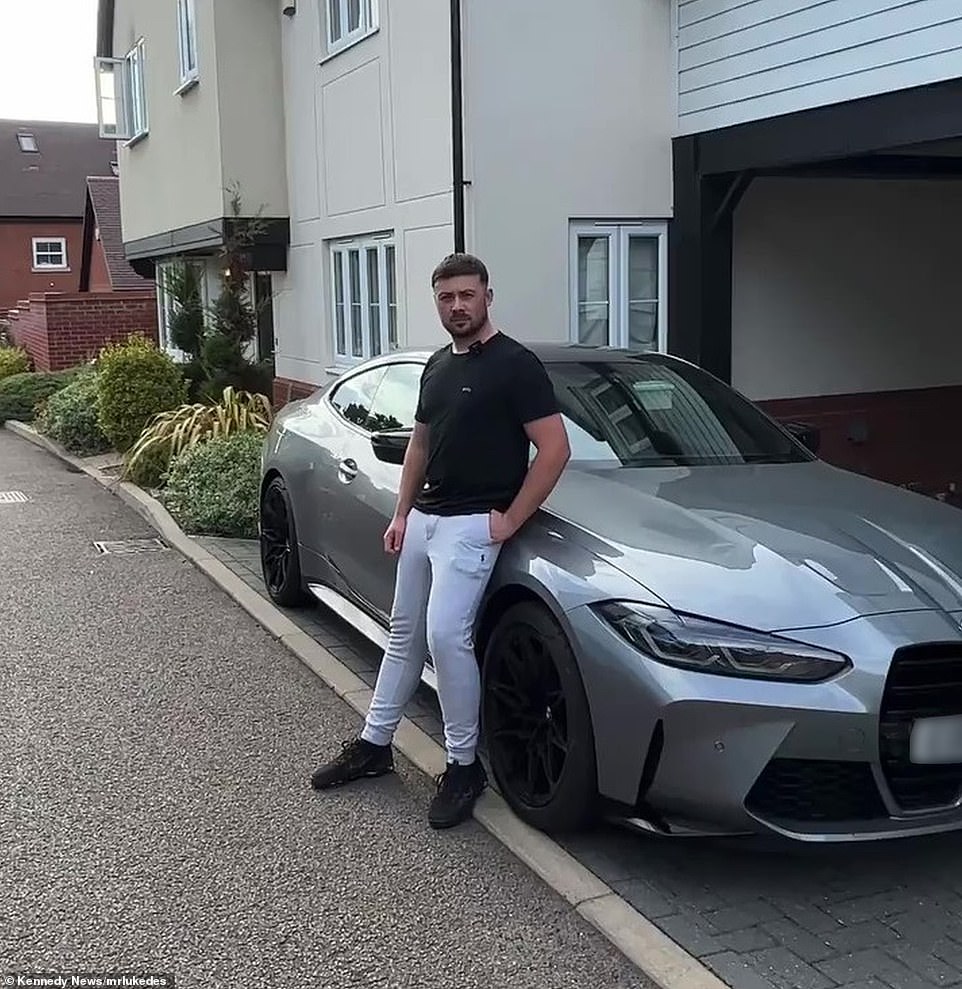 His only company which is up and running and has filed accounts is called TheAlertNation Limited and had retained profits of just £6,423, when its latest accounts were published in September this year

His only company which is up and running and has filed accounts is called TheAlertNation Limited and had retained profits of just £6,423, when its latest accounts were published in September this year.

The turnover figure and the amount paid in any dividends to Desmaris and his fellow director Jamie Czechowicz, 27, who jointly launched the company in 2018 are not revealed in the accounts which can be publicly viewed as the company is a small business.

The pair use a legal business accommodation address in north London as their registered office, but Companies House records give a correspondence address for Desmaris as being a bungalow hidden behind locked gates and an overgrown hedge just outside Harlow.

The gates of the bungalow which are set back from a busy road and cannot be seen from the house, feature a pair of 18 inch long sections of drainage pipe, acting as a makeshift open post box.

The bungalow is home to an elderly couple who were shocked to be told by MailOnline that Desmaris was using their property as a correspondence address for his business.

The woman resident who asked not to be named said: ‘I have never heard of this man before and I did not realise that he was using our address. This is very worrying news and I am going to have to inform my solicitor.

‘He has no right to use this address and I cannot understand how he has managed to do it. I have not got a clue who he is. This needs to be stopped.’

Desmaris and Czechowicz insisted that the use of the address was an innocent mistake when they met up with a MailOnline reporter in a Costa coffee shop at the Queensgate retail park in Harlow.

The pair claimed that they had previously had an ‘operational station’ at an address with a similar name to the property around 200 yards down the same road. 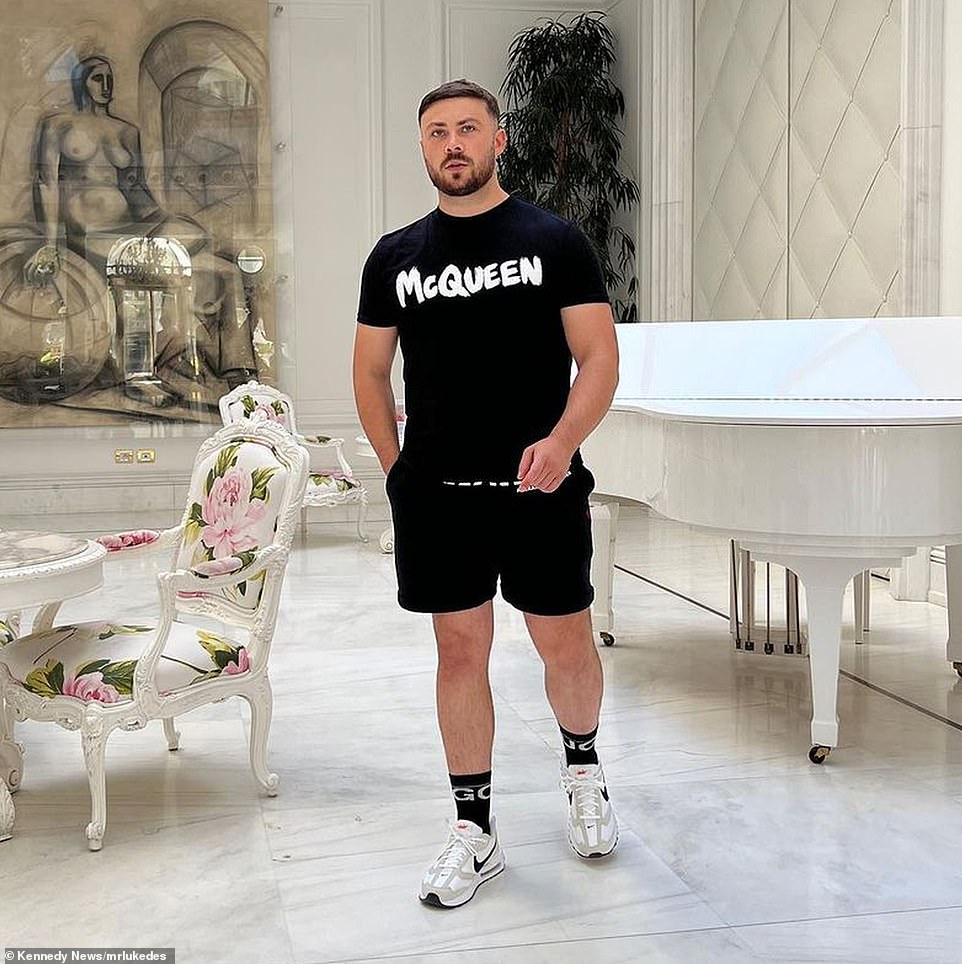 They insisted that they were completely unaware that the incorrect address had been given to Companies House until they were told about it by MailOnline, and denied that it was part of any scam.

Czechowicz said: ‘It is simply a discrepancy. It is legitimate that the address was incorrectly inputted… It’s metres away from the actual address. It was a genuine mistake… Discrepancies happen and mistyping happens… Thanks for telling us, we can update that.’

Describing the address which he says should have been given, he said: ‘It was an operational station and our relation to it is irrelevant…At the end of the day, there is a discrepancy on the website… We all type things wrong sometimes.

Desmaris added: ‘There is a genuine address and you went to the wrong one… I can’t tell you if that’s the wrong address. I will have to check it.’

Earlier the pair launched a staunch defence of their business model which uses videos of Desmaris boasting about his apparent wealth and luxury lifestyle to sell advice to people wanting to get rich quick by trading on their laptops and mobile phones. 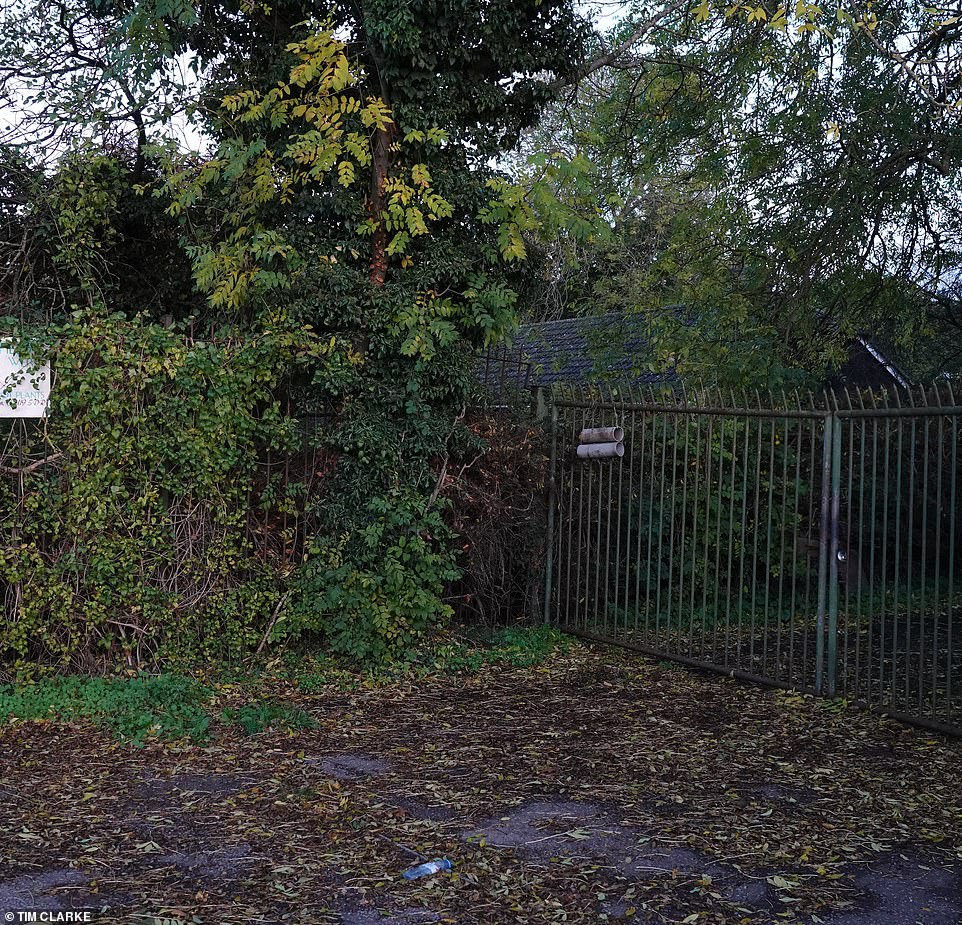 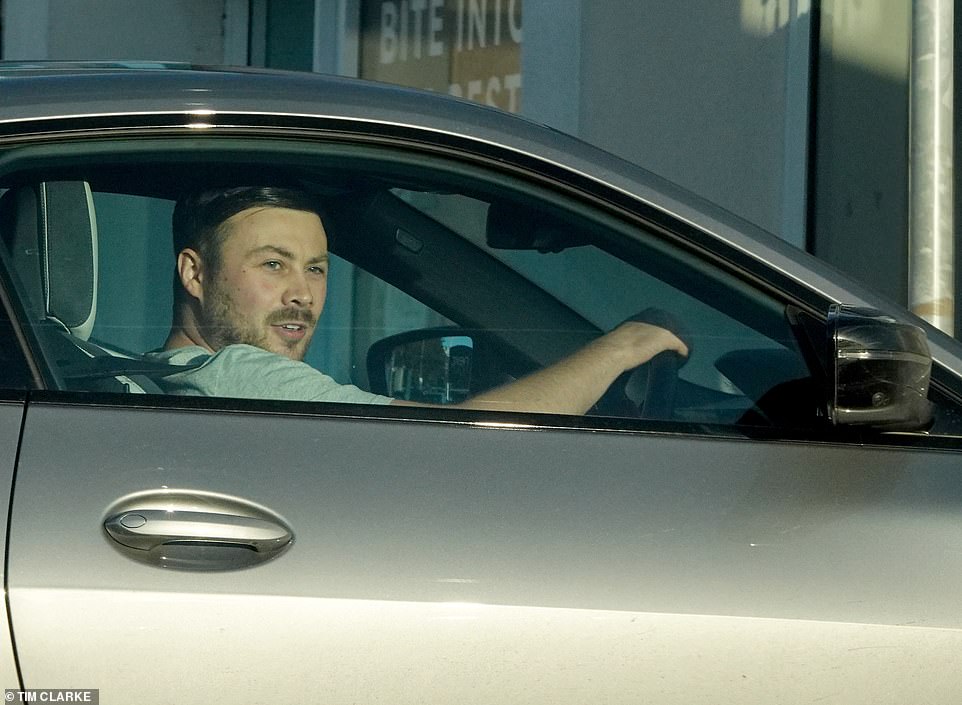 Desmaris (pictured in his £70,000 BMW) also refused to disclose whether he owned any property, saying: ‘To live in a house like that and drive a car like that, put two and two together

He said: ‘It is impossible for you to prove how much someone is worth.’

When asked if he leased or rented his car, he replied: ‘I’m not commenting on that.’

Desmaris also refused to disclose whether he owned any property, saying: ‘To live in a house like that and drive a car like that, put two and two together.

‘You have to be earning good money. All I say is I am wealthy and selling a very fair product and service, and that is all there is to it.

He refused to show the reporter any of his bank statement or evidence of investments, saying: ‘Put it this way, I live in a very nice house and I am not willing to discuss my personal life with you… I moved very recently into a really nice house.

‘We offer a legitimate service on line which is a course. Selling over-priced coffee is more of a scam, and you are worried about me selling a course

‘We are trying to inspire young people with motivational videos and teach them what is possible. That is all we are doing. 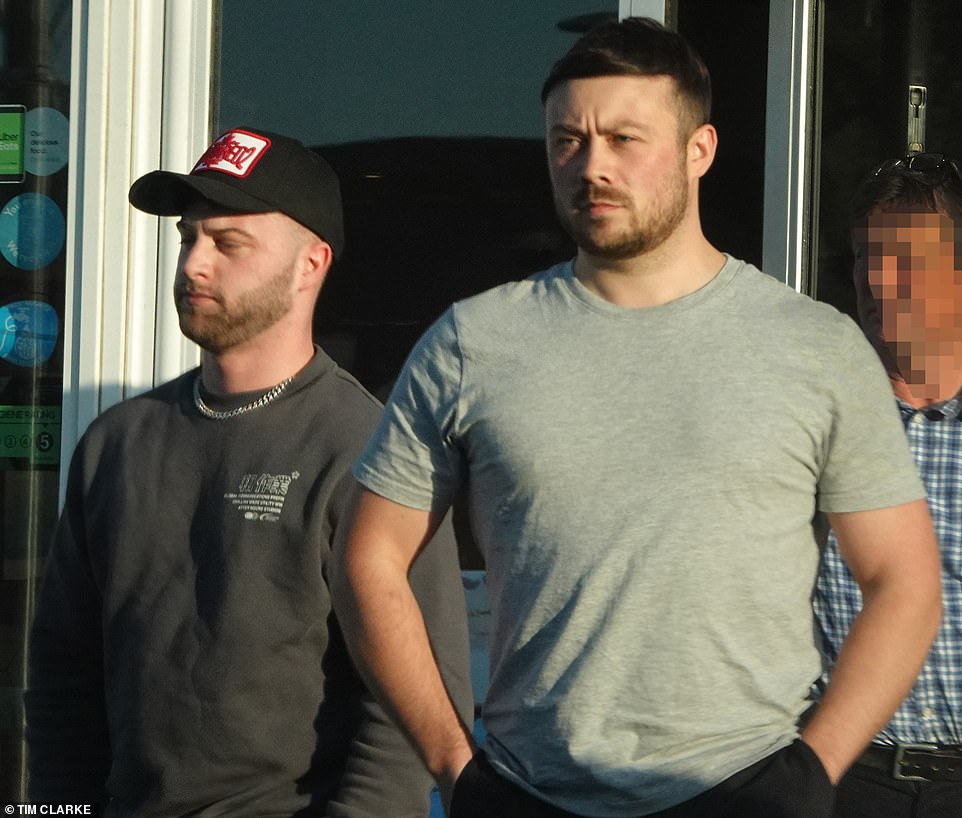 ‘I know society wants people to go down different routes. We are trying to show people that they can do more.

‘Why the hell would I trust you with my personal details? No disrespect, but you have no authority. You are not a judge.

‘We don’t need to show you anything. We are both very wealthy. That is all we need to say.’

Desmaris added: ‘You are jumping to conclusions that aren’t even true.’

Explaining why he would not give proof of his finances, he told the reporter: ‘You are like a nobody to me… My money is stored in all sorts of places.

Desmaris said he could provide evidence of his wealth and trading success if he wanted to, but he added: ‘We don’t need to.’

He went on: ‘You are very lucky I even came to speak to you… The bottom line is that we are both wealthy individuals.

‘We are selling a very cheap and fair service online that anyone can join. We are not hurting anyone or harming anyone.

‘We are literally selling a £29.99 service that you get a lot of value from. We have done nothing wrong. You are coming at us like we have done something really bad.’

He added: ‘You are demonising us. We are just offering a cheap course.’

Desmaris and Czechowicz were vague about whether they were jointly running the subscription service detailed on a website linked to Desmaris’ social media accounts. 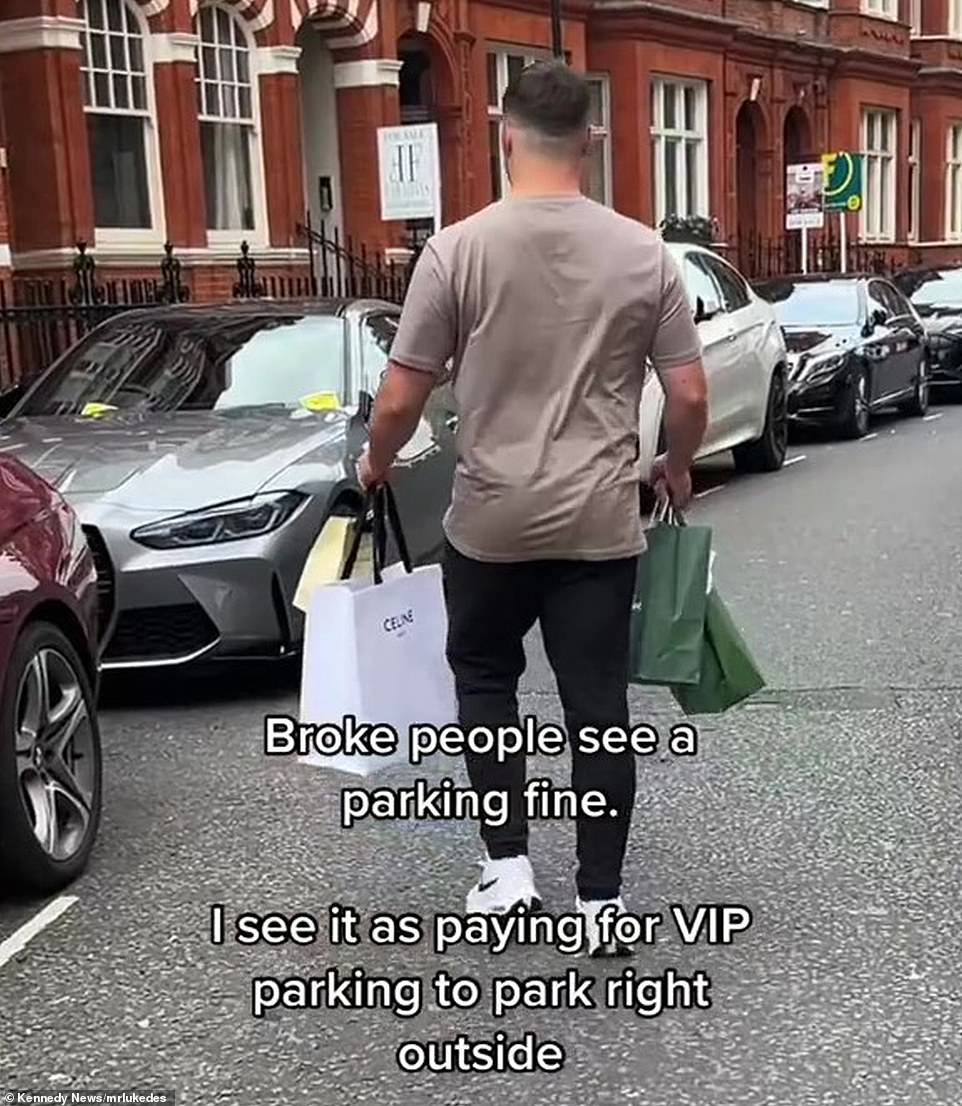 Yellow fixed penalty notices can be seen on his windscreen, yet the voiceover explains ‘broke people see a fine, but I see VIP parking’

Czechowicz said: ‘We live in the UK which is a free country. This is the UK where capitalists can achieve thing and we have the right to freedom of speech.

Czechowicz pointed out that they only offered tuition in foreign exchange investment rather than direct financial advice which needed to be regulated.

He said: ‘We don’t take people’s money and invest it. We don’t want to go down that route. It’s too much hassle… We are selling an educational service which is purely for educational purposes. We are not saying you should go and do this. It is market commentary. You don’t need to be regulated to express your opinions.’

Czechowicz went on: ‘When a person signs up there is no way of knowing for certain how much we are worth. They agree to join, knowing they can’t prove how much we’re worth.’

Desmaris compared himself to controversial social media influencer Andrew Tate, saying: ‘You may have heard of Andrew Tate. He does a similar thing with a course which is paid for on a subscription basis.

‘Ours is similar priced – about 30 quid and very cheap but good value so you get a nice video course and support mentoring. It is a good value course. We are literally doing it for 30 quid.

‘If you pay for the course, you get support continuously. You are paying for education and you can cancel it if you want to… There is nothing wrong in promoting a service. They know full well that it is not guaranteed. They know they are signing up to be educated. It is not an investment scheme… We are absolutely not financial advisors.’

Desmaris and Czechowicz launched another company in July, called We Own Everything Ltd, described as an education business, which has so far not disclosed any details of its earnings.

Another company Des &Co limited set up by Desmaris in July last year has yet to file accounts while his company FreedomFXTrading Limited was closed in January 2020 voluntarily. 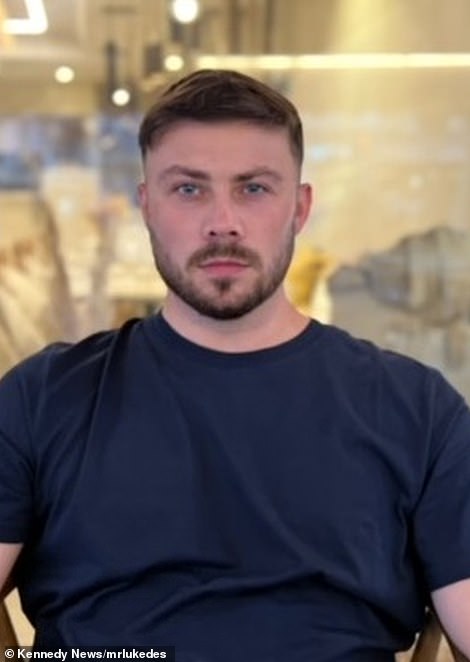 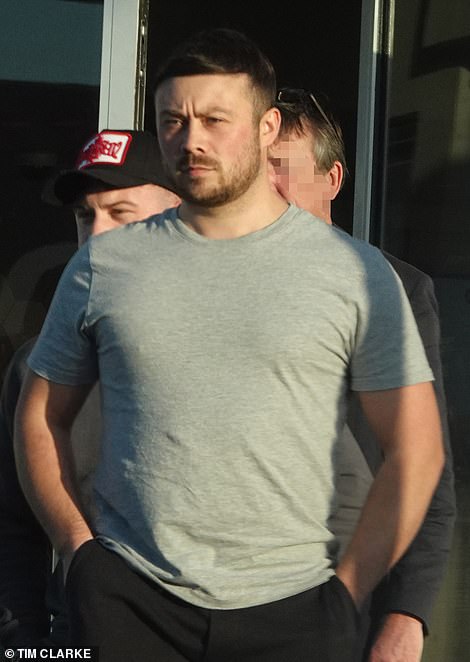 His business Desmaris Property was struck off voluntarily in 2019 without filing accounts.

Another of his firms LJ Des Limited, a retail business, was dissolved voluntarily without revealing any accounts in September 2020.

Eproso Security, a private security and retail firm set up Desmaris and Czechowicz in 2015 was closed in August 2017 without having had to file accounts

Desmaris has racked up more than three million viewers on his TikTok video showing him casually walking from Harrods and swanky Middle Eight Hotel towards his BMW M4, and not caring about fixed penalty notices on his windscreen

He claimed earlier this week that he had paid more than £7,000 in parking fines over the past 12 months, but insisted that he didn’t care because his success meant ‘money doesn’t matter’.

He justified the stunt by explaining ‘parking in London is a nightmare’ and his ‘time is valuable’, and saying that ‘as long as he’s not causing anyone harm he’ll do what he wants’.

Viewers of the video were split between those describing it as a ‘life hack’ and others saying he deserved tougher penalties than London’s standard £65 parking fines if paid within two weeks.

Desmaris said: ‘I see it as saving my time and my time is valuable. It’s the convenience of it.

‘If I can save my time by doing that, then I will. It means I’m able to go home quicker to get back to trading. That’s my logic behind it.

‘I’ll do it when I go shopping, especially in London. I’ll just park it outside because It can be a nightmare to park otherwise.