And after spending four and a half months of 2018 touring Australia in a caravan with their two kids, the Tasmanian couple decided to take the leap.

Two years on, a 130-year-old train carriage sits in the front yard of their Gravelly Beach property. Soon, they will have completely transformed it into a home for their family’s new life ‘off grid’.

‘The initial part will be hard work, but once it is set up it will be relaxing,’ Ms Barwick, 28, told Daily Mail Australia.

Tasmanian couple Ash Barwick, 28, and Jake Williams-Sims, 32 are transforming an 130-year-old train carriage into a new home for their new self-sufficient lifestyle. They are pictured with their children Eli, five, and Gypsi, six

‘We will have solar, water tank, no more electricity and water bills.

‘We will just have a simple life.’

The couple, who own a gardening and landscaping business, had spent years eyeing the carriage as it sat in a client’s Westbury backyard but their repeated offers to buy it were always knocked back.

Their lucky break came in October 2019, when the owner decided to put it up for sale – generously offering a trade in exchange for the reduced cost of their labour.

‘It had been sitting there rotting away for years,’ Ms Barwick said.

‘Then he said ”If you want to work a bit cheaper you can have it if you can move it”.’

After working a week of long full days in the summer sun, they were able to call it their own. But then the mammoth task ahead of them began to sink in.

‘We were in a bit of shock,’ Ms Barwick said.

‘We thought what have we gotten ourselves into.

‘It is falling apart.’ 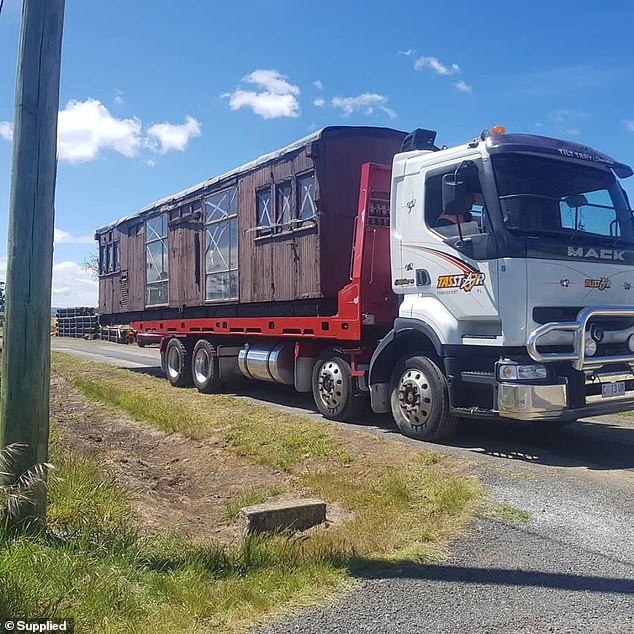 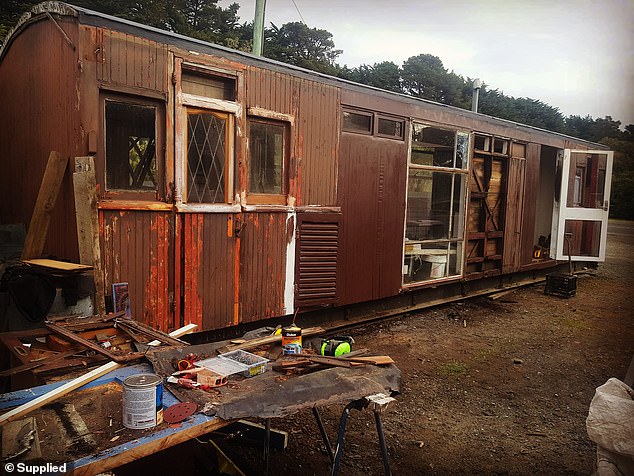 The carriage (pictured) is one of 52 carriages in the DB class, which transported passengers, freight and livestock across Tasmania from the 1890s to the 1980s

A year later, their hard work has started to pay off and the carriage has begun to take shape.

The carriage, which stretches 12.8metres, is being converted into a kitchen, bedroom and living room.

Once it is complete, it will be shifted to a new block of land and joined with a shipping container and a caravan- both of which will be turned into bedrooms.

So far, the roof and one wall has been restored, with hopes the project will be entirely finished in 12 months time.

‘Now we can see it getting somewhere it feels a bit accomplished,’ Ms Barwick said.

‘At first there was so much work we felt like we would never reach our goal.’ 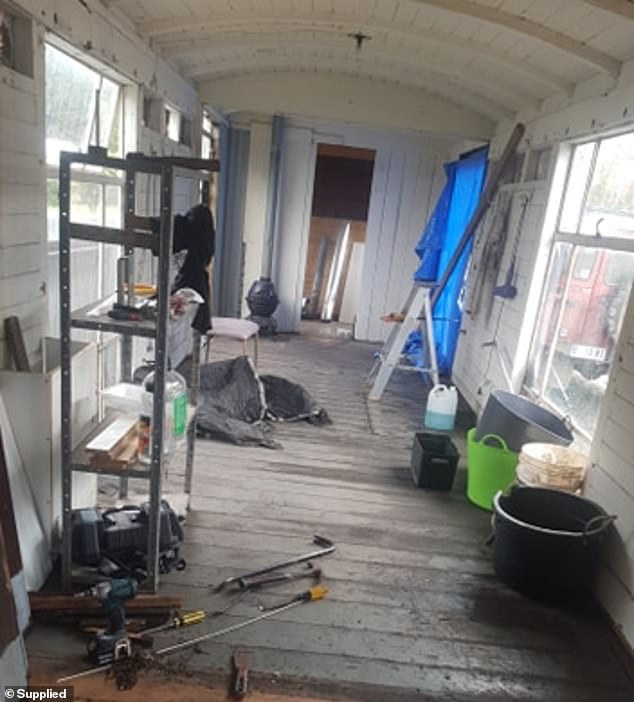 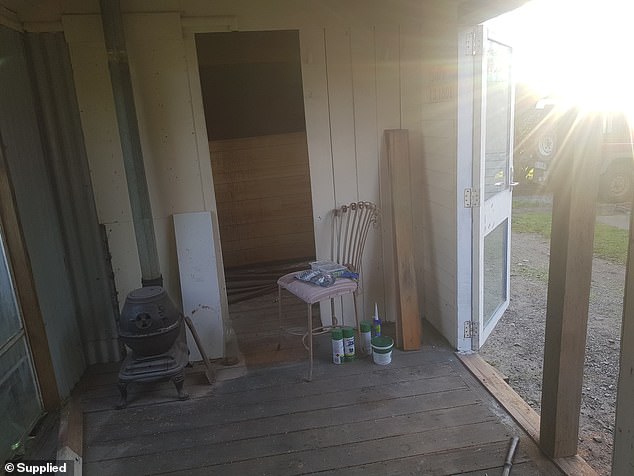 The 12.8metre space will be transformed into a living room, kitchen and bathroom

To find out about its history, Ms Barwick emailed the Tasmanian Transport Museum to and was sent blueprints and photographs of the carriage in its prime.

The couple learned it had been one of 52 carriages in the DB class, which transported passengers, freight and livestock across Tasmania from the 1890s to the 1980s.

Ms Barwick said they aim to keep as many of its antique features intact as possible.

‘We are trying to keep the rustic sort of feel,’ she said.

‘We are reusing and restoring what we can from the original timber and windows, plus using what we have lying around and sourcing things from gumtree, tip shops and market place.

Occupied by work and raising a young family, the couple devote every moment they can in between to polishing up their soon-to-be home.

The project has even drawn the excitement of their children, Gypsi, six, and Eli, five, who help out where they can.

‘They love it!’ Ms Barwick said. 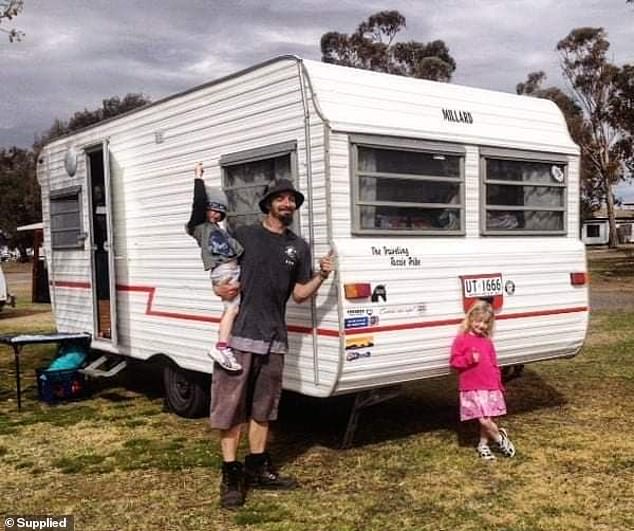 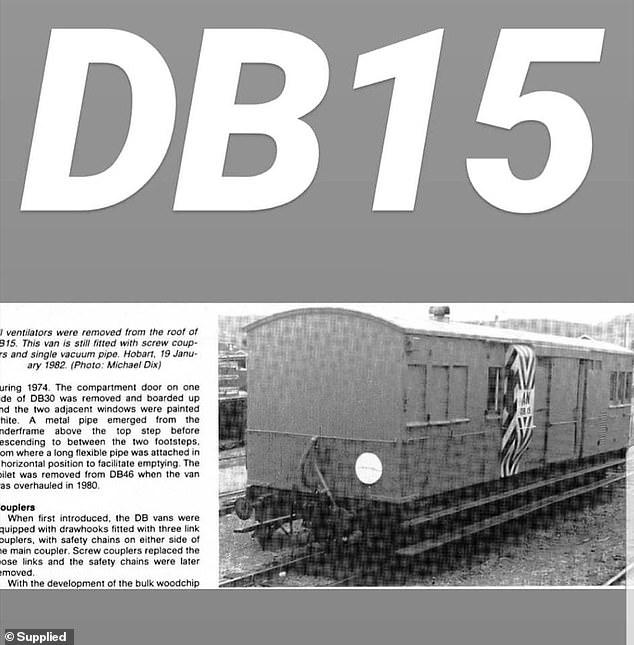 ‘We have those large toy fishing rod with magnets on the end, and they go around and help pick up the nails. ‘

Despite their renovation steaming full speed ahead, Ms Barwick and Mr William-sims, 32, have encountered difficulties trying to secure a block of land.

Self-sufficient living has become an increasingly popular goal among land buyers within their state- particularly, Ms Barwick said, since the pandemic.

‘Everyone seems to want to buy land at the moment since lockdown,’ Ms Barwick said. 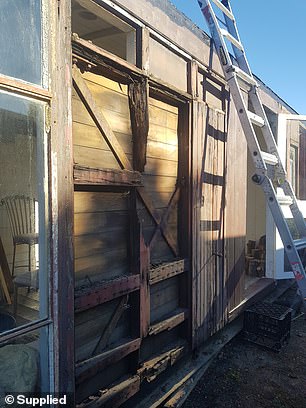 The 130-year-old train carriage was in poor condition, but the couple have since repaired the roof and a wall (pictured)

‘Everyone it like ”I don’t want to live this suburban lifestyle, I want to grow my own food’.

‘Since the COVID thing, everybody’s gone towards that self-sustainable sort of living,’ Ms Barwick said.

While the couple already have a vegetable garden, chickens, and some fruit trees, they hope to open a nursery on their new property too.

Aside from the future benefits the changes will bring, Ms Barwick said she has found the process just as rewarding- and one that serves as a vital lesson for her young children.

‘I feel real sense of appreciation working on it,’ Ms Barwick said, ‘privileged in a way too, to know I can use a power drill when every piece of this was hand sawed and nailed when it was built.’

‘I’ve always been grateful and count my blessings and gratitude is a value we teach the kids- if something is broken why not fix it?’

‘What better way to put those words into action by restoring a 130 year old train carriage!’ 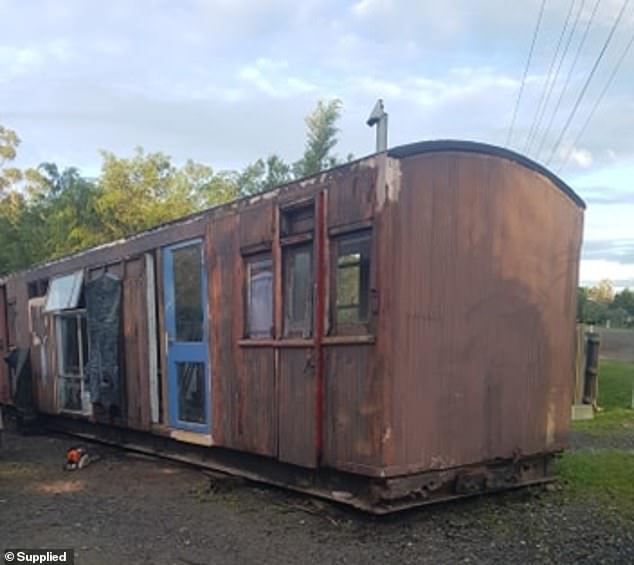