Selma Blair has opened up about her decision to undergo experimental stem cell and chemotherapy treatment for her multiple sclerosis – despite confessing that she has always been ‘mortally afraid’ of such intensive medical procedures.

The 49-year-old mother-of-one first revealed that she had been diagnosed with MS – a condition in which the immune system attacks the body and causes nerve damage to the brain and spinal cord – in October 2018, and months later her illness had reached such a ‘critical point’ that she decided to undergo an experimental stem cell transplant to try and improve her quality of life.

Although the treatment is not considered a cure for the condition – nor is it yet approved by the FDA – Blair revealed during an interview with Good Morning America on Monday that it has drastically helped to improve her symptoms, with the actress telling host Robin Roberts: ‘At this moment, I’m great.’

However, the Legally Blonde star admitted that she is determined to take her illness day by day, explaining that she still struggles with symptoms that ‘can sometimes be embarrassing’, including physical ‘glitches’ and issues with her speech.

Speaking out: Actress Selma Blair has shared a candid update about her multiple sclerosis battle, revealing that she is ‘doing great at this moment’ 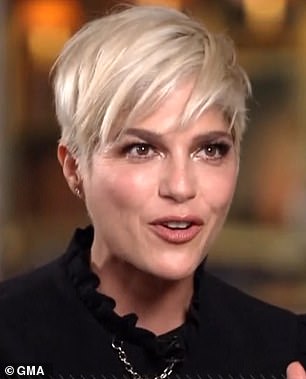 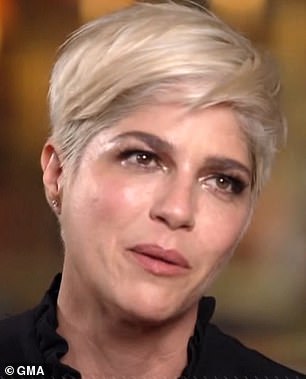 Day by day: The 49-year-old actress, who publicly revealed her MS diagnosis in 2018, spoke to Good Morning America about her condition – and a new documentary about her illness 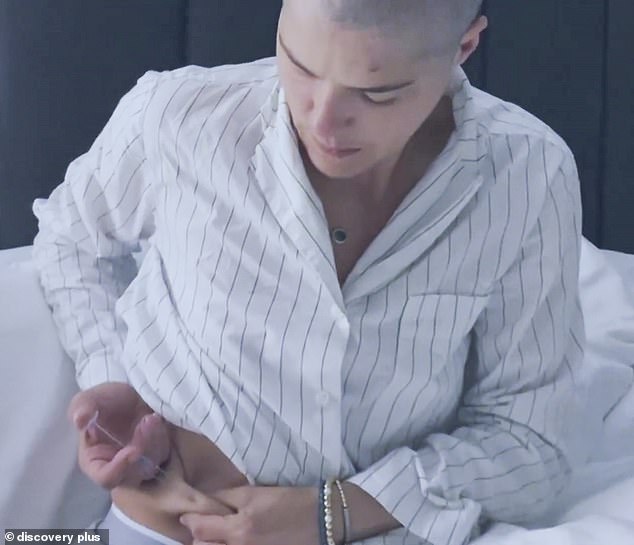 Candid: Blair is due to share a very honest look at her illness and treatment in a new Discovery+ documentary, Introducing, Selma Blair, which follows her stem cell and chemo procedures

‘It is important to say “at this very moment,”‘ Blair continued, adding that she ‘doesn’t want to be complaining’.

‘I have more gains than losses,’ she continued. ‘And I do have things that can sometimes be embarrassing but this part of it that I do want to show ’cause that’s the part that’s healing, and perfect, and acceptance – the glitches, maybe some of the speech.’

Blair is set to share a very candid look at her battle with multiple sclerosis in a new documentary, Introducing, Selma Blair, which premieres on October 15 – and which will capture her stem cell treatment process, as well as the grueling chemotherapy that she then underwent to ‘reboot’ her immune system.

Speaking to GMA about the documentary, Blair admitted that the decision to undergo the experimental treatment was not one that she took lightly – explaining that she had always tried to ‘go holistic’ with medical procedures in the past and was ‘mortally afraid’ of anything more intense like chemo.

‘I was mortally afraid of chemo my whole life,’ she revealed. ‘I’m someone that’s always gone holistic when I can.’

However, Blair’s illness reached such a ‘critical point’ in 2019 that she felt as though she had no choice but to try any treatment that might give her some relief.

‘I kind of got to a critical point and my nervous system and more symptoms and I couldn’t stay awake,’ she said. 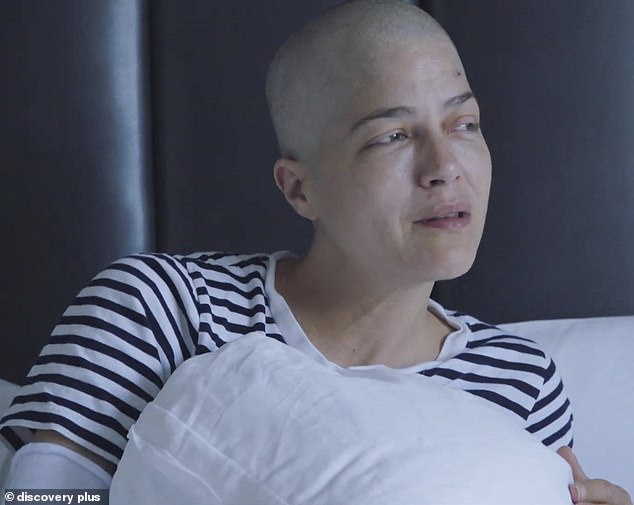 Difficulties: Speaking to GMA, Blair admitted that she has been ‘mortally afraid of chemo her entire life’ but made the decision to do the treatment when her MS reached a ‘critical point’ 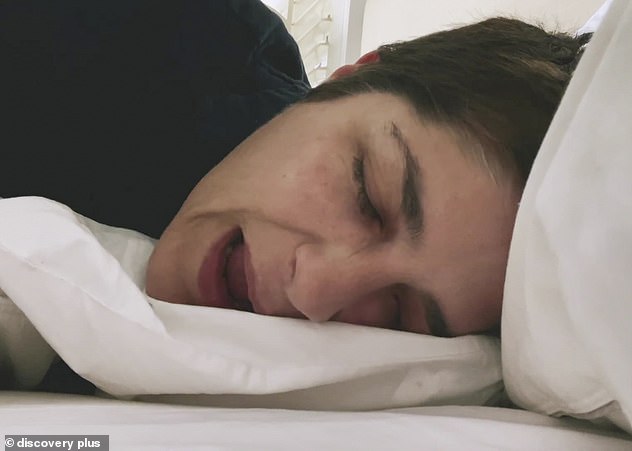 Emotional: Her documentary will capture some of the most painful aspects of her illness and her stem cell transplant – an experimental treatment that does not yet have FDA approval

But despite her fears about the experimental treatment, Blair noticed an almost immediate improvement in her symptoms, telling Roberts that she was able to talk clearly after just one dose of chemotherapy, while her inflammation also started to go down straight away.

Inside Selma Blair’s illness: What is MS and how does it impact the lives of sufferers?

Multiple sclerosis (known as MS) is a condition in which the immune system attacks the body and causes nerve damage to the brain and spinal cord.

It is an incurable, lifelong condition. Symptoms can be mild in some, and in others more extreme causing severe disability.

MS affects 2.3 million people worldwide – including around one million in the US, and 100,000 in the UK.

It is more than twice as common in women as it is in men. A person is usually diagnosed in their 20s and 30s.

The condition is more commonly diagnosed in people of European ancestry.

The cause isn’t clear. There may be genes associated with it, but it is not directly hereditary. Smoking and low vitamin D levels are also linked to MS.

Symptoms can be managed with medication and therapy.

The condition shortens the average life expectancy by around five to 10 years.

Now, two years after her stem cell and chemo treatments, Blair revealed that her brain is no longer forming new lesions – which develop as a result of the immune system attacking the body – although she is still struggling with aspects of her speech and movement, which she treats with daily medication.

Since going public with her diagnosis in 2018, Blair has been incredibly candid about the impact her illness has had on her day-to-day life, documenting her highs and lows on social media – and now in her new Discovery+ movie, which will offer an incredibly intimate glimpse inside her health struggles.

Speaking about the decision to share such a candid look into her life, the actress explained that she hopes to offer inspiration and honesty to anyone else who is living with a chronic illness or disability.

‘I chose this as a marker in my life to want to live, to want to be a person that can show other people with chronic illness, disabilities, an injury they couldn’t get over, a hit… I just took a hit. And we take hits… And [I want to show] that resilience is possible,’ she said.

While Blair knows that she will continue to go through highs and lows in her multiple sclerosis battle, she is optimistic about her future – and even shared her hopes of returning to acting one day, although she conceded that she has to be ‘patient’ before making any decisions about stepping in front of the cameras again.

‘I’m not looking [for an acting job], but God knows I would never say I wouldn’t dream of being a part of an amazing set one day,’ she shared.

‘We have to take care of ourselves and be patient. And better times come. Maybe not for good. Maybe it’s not a cure. But more than not, better times will come. We’re meant to have joy on this earth. I never felt that before.’

The Legally Blonde star’s appearance on GMA comes almost three years after she gave her first public interview to the morning show after revealing her MS diagnosis.

At the time of the February 2019 sit-down – which came months before Blair began her stem cell transplant and chemotherapy treatments – the actress voiced her ‘relief’ at finally getting a concrete diagnosis after struggling with her health for years.

Speaking to Roberts, Blair recalled the moment that she was told she had MS, after spending years living ‘in pain’ with an undiagnosed condition that doctors simply passed off as the result of her being an ‘exhausted single mother. 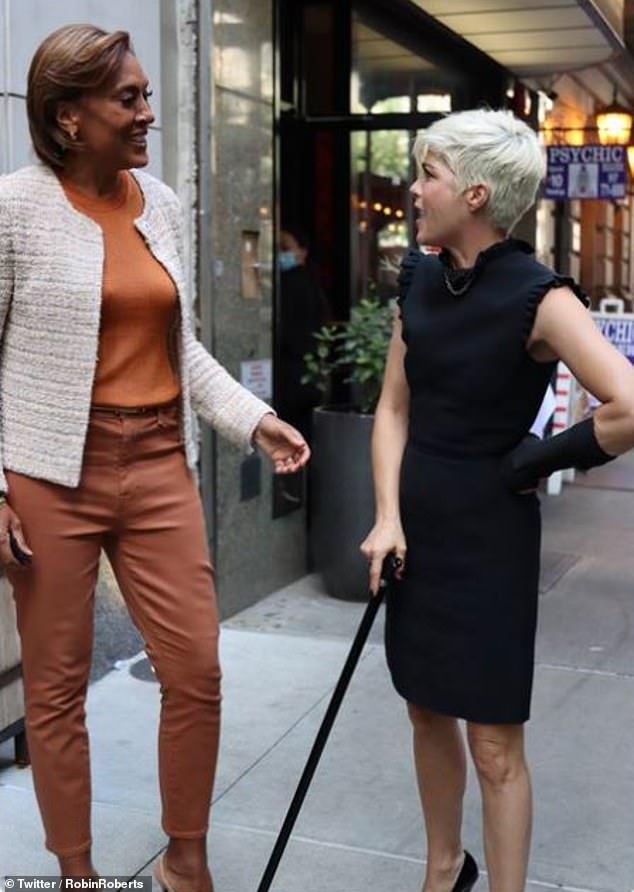 Journey: Blair, who walks with a cane to help stabilize her, told GMA’s Robin Roberts that she is hopeful she will one day be able to return to acting

‘I cried, I had tears,’ she said of her reaction. ‘They weren’t tears of panic. They were tears of knowing I now had to give in to a body that had loss of control.

‘And there was some relief in that. Cause ever since my son was born, I was in an MS flare-up and didn’t know, and I was giving it everything to seem normal.’

That struggle to seem normal, Selma admitted, involved self-medicating whenever she was not around her son Arthur, now seven, as well as drinking heavily in order to cope with the pain and exhaustion that she was struggling to combat.

‘I was self-medicating when [Arthur] wasn’t with me,’ she said. ‘I was drinking, I was in pain.

‘I wasn’t always drinking, but there were times when I couldn’t take it. And I was really struggling with how am I going to get by in life.’