This is the terrifying moment a vicious storm almost blew some semi-trucks off a highway with fierce 80mph winds whipping snow at drivers as they struggled through a ‘bomb cyclone’.

The alarming footage was captured in Denver, Colorado and shows the trucks being pushed around by the severe winds on several occasions.

Eventually, one of the semi-trucks tries to leave the road but is again buffeted by winds and forced onto its side, where it becomes stuck, blocking the highway exit and causing a traffic pile-up.

The drivers of the truck battled against the storm, righting and straightening their vehicles every time they are pushed to the side.

They even move towards the fast lanes to give themselves more space.

However, this doesn’t stop one of the trucks blocking the highway exit and causing a pile-up.

The heart-stopping video was filmed on March 13, while Denver was in the grip of a record-breaking storm.

More than 70 million people found themselves in the path of the ‘bomb cyclone’ which prompted the cancellation of more than 1,000 flights and closed hundreds of miles of highways in the West and Upper Midwest.

Hundreds of drivers were stranded on Colorado highways, including 500 in the Colorado Springs area alone.

The woman who recorded the carnage said: ‘I left work that morning when my husband informed me the weather was getting bad. 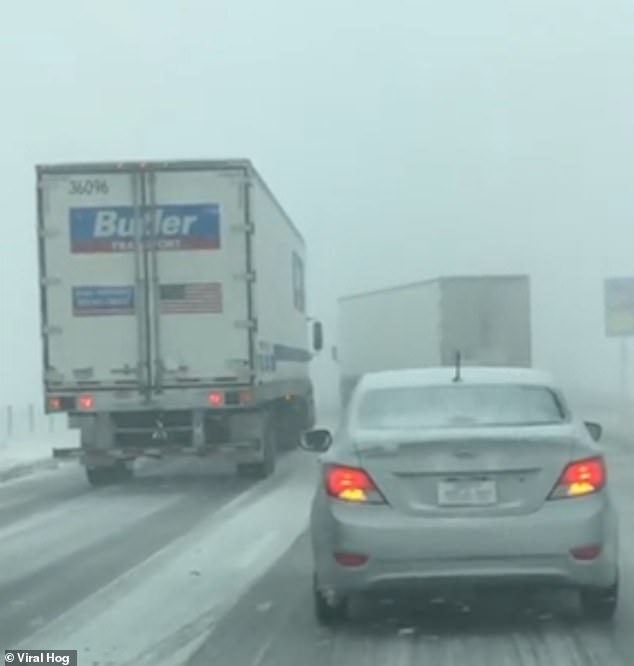 ‘I left Denver, where it was barely snowing but getting windy at around 11 am.

‘I merged onto I-76 east towards Lochbuie, and the further east I got the worst the weather became. There were multiple semi-trucks struggling to stay on the highway. The wind was insane!

‘Winds at 80mph and pressure drops, making this snowstorm into the ”bomb cyclone”. There were multiple semis trying their hardest to stay on the roads.

‘After an hour of being on I-76 (normally a 35-minute trip work-home), I passed the Eagle exit where it looked as if a semi had attempted to get off the exit for safety, but the winds had blown his truck sideways, now blocking the Eagle exit.’ 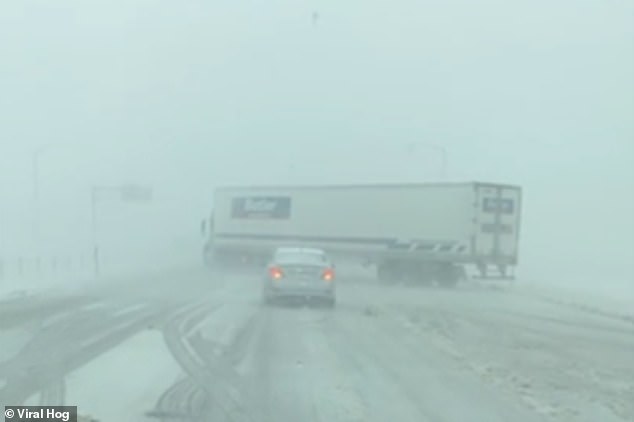 Eventually, one of the trucks was sent sliding to the side of the road, where it came to a rest on its side, blocking an exit

‘We came to a stop shortly after this exit where this video takes place. These two semis were originally in the slow lane nearly getting blown off the highway.

‘They slowly moved into the fast lane to give themselves more space to be blown around like toy trucks! We all waited and watched ambulances and fire trucks pass through the traffic, all while these semis continued to get blown over.

‘I had never seen anything like this in my life. I ended up getting off at Bromley (the next exit) where many semis were also going for safety.

‘I then slowly made my way home in whiteout conditions. Nearly two hours later I made it home, pulled into the garage and was unable to open my driver door.

‘The wind had been blowing against the driver door and had frozen shut.’