Democratic Senate Leader Chuck Schumer wants rename a Senate office building after Senator John McCain – an idea that appears to be gaining momentum after some of his colleagues agree with the proposal.

‘I want to be the first Republican co-sponsor for that resolution,’ Republican Senator Jeff Flake said on CBS’ ‘Face the Nation.’ 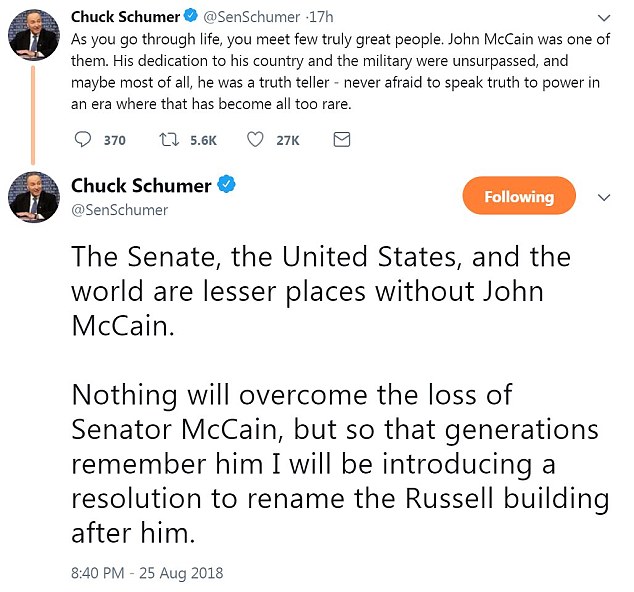 Schumer proposed the idea shortly after McCain died on Saturday 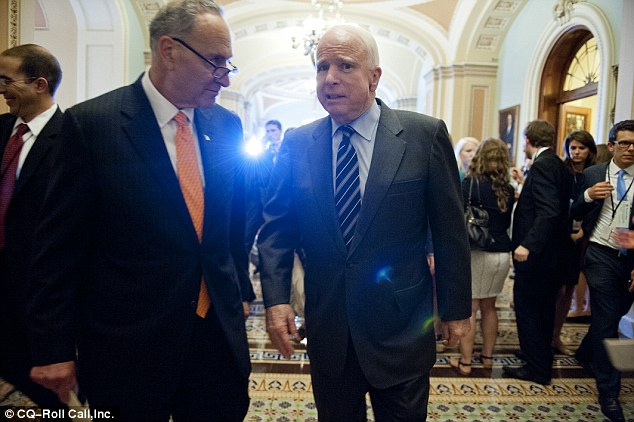 Schumer said: ‘I’d like decades from now for little children to ask their parents who was John McCain’

‘I think it’s an excellent idea,’ he said on CNN Sunday morning.

Schumer proposed renaming the Russell Senate Office Building after McCain on Saturday, in the wake of the senator’s death.

‘Nothing will overcome the loss of Senator McCain, but so that generations remember him I will be introducing a resolution to rename the Russell building after him,’ he said in a statement.

‘I want generations in the Senate, and in the world, to remember him,’ Schumer said. ‘And I’d like decades from now for little children to ask their parents who was John McCain.’

The Russell Senate Office Building is the oldest Senate office building – it opened in 1909 – of the three structures that sit across the street from the U.S. Capitol building to house the senators’ offices.

It is named after the late Sen. Richard Russell of Georgia and it’s where McCain’s Senate office was located.

Russell was a Democrat from Georgia who served from 1933 to 1971. He was known as the senator’s senator.

But there have been unsuccessful efforts over the years to rename the building that bears his moniker because he was a staunch opponent of the civil rights movement and supported segregation. He would use parliamentary maneuvers to scuttle civil rights legislation like bills banning lynching and abolishing the poll tax. 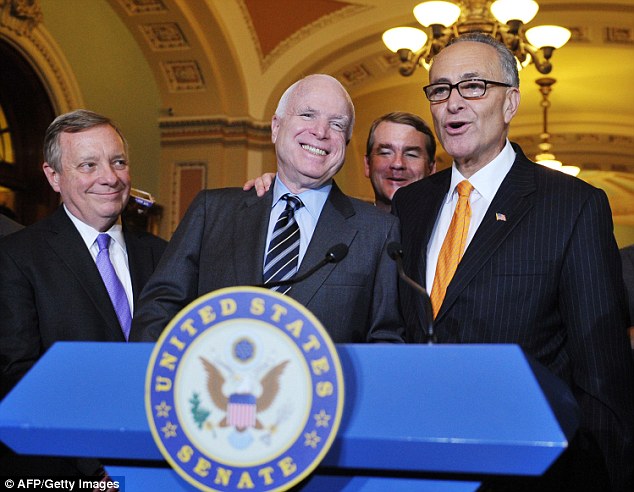 Schumer’s proposal got support from other senators 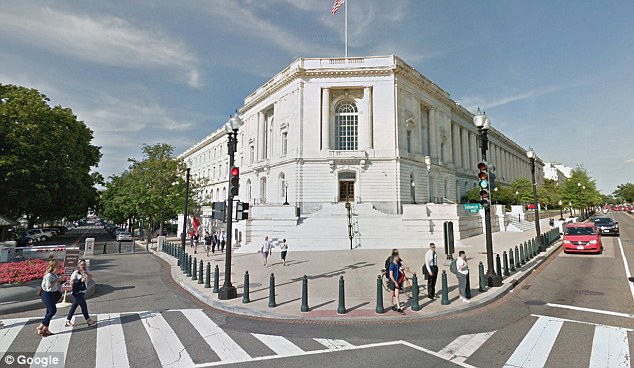 The Russell Senate Office Building is the oldest of the three buildings that sit across the street from the U.S. Capitol building and house senators’ offices

Political fans would recognize the building’s rotunda from its numerous TV appearances. The Russell Rotunda is the area where senators give television interviews. On any given day the Senate is in session, TV cameras from every network are set up in the rotunda.

A statue of Sen. Russell also stands in the rotunda.

The room has been the site of some of the most famous hearings in Senate history: the 1912 sinking of the RMS Titanic hearings; the 1974 Watergate hearings, the Iran-Contra hearings, and the 1991 Clarence Thomas Supreme Court nomination hearings.