Senators have been inside the US Capitol all night voting on dozens of amendments to Democrats’ $740 billion climate change and healthcare spending bill, in a lengthy process known as a vote-a-rama.

Lawmakers bought sweet and salty snacks for their aides, and 88-year-old Republican Senator Chuck Grassley had been taking 10-minute naps to make it through the night, according to CNN.

The outlet reported that Democrat Senator Dianne Feinstein, a year older than Grassley, had been taking walks to and from her office between votes. Democrat Senator Patrick Leahy, there after hip surgery, is reportedly present in his wheelchair.

Democrat Senator Chris Coons told CNN Sunday morning that he was on his fourth cup of coffee, and did not expect a final vote until at least 12 p.m.

Hoping to score a major win for President Joe Biden ahead of the November midterm elections, Democrats have cobbled out an agreement on a financial package that can be passed via the budget process known as reconciliation.

What that means is that it can be passed via a simple majority vote by the party in power, rather than the 60-vote threshold needed to pass most other legislation – but can only be passed after an unlimited number of amendments come to the floor.

On Saturday evening, all 50 Senate Democrats voted to proceed with debate on the bill. Vice President Kamala Harris cast the tie-breaking vote.

But as of Sunday morning the bill has survived an onslaught of Republican amendments including ones cracking down on the southwestern border and on the IRS. 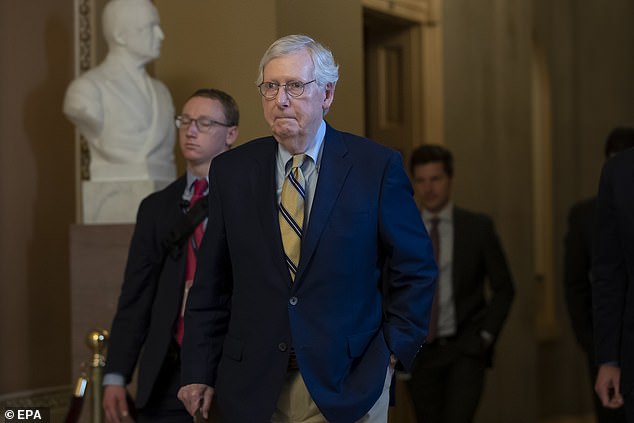 Meanwhile Republicans have attempted to undercut its likely passage with a series of amendments on the border, crime and the IRS

The GOP is hoping to pin down vulnerable Democrats into uncomfortable positions by making them vote down proposals on hot-button issues.

‘Sometimes you don’t get a vote on some of these things, so it’s good to bring them out,’ Republican Senator Tommy Tuberville told The Hill.

One of Sanders’ own amendments that would have ensured the cost of drugs for Medicare programs don’t exceed the those of the Veterans Affairs’ Department was defeated 99 to 1.

The self-proclaimed Democratic Socialist offered other amendments to expand Medicare and lower prescription costs, something he has said the bill doesn’t go far enough on, but they were similarly voted down by a majority of his colleagues.

Sanders was also the only one who voted in favor of his measure to raise the corporate tax rate to pay for an expanded child tax credit – with 97 senators voting against.

Senator Michael Bennet, another Democrat, told CNN on Sunday morning that Sanders’ amendment was ‘not helpful.’

‘I don’t want to embarrass anybody, Sanders apparently told reporters about his slew of proposals. ‘Are they frustrated because we need to expand and extend the child credit?’ 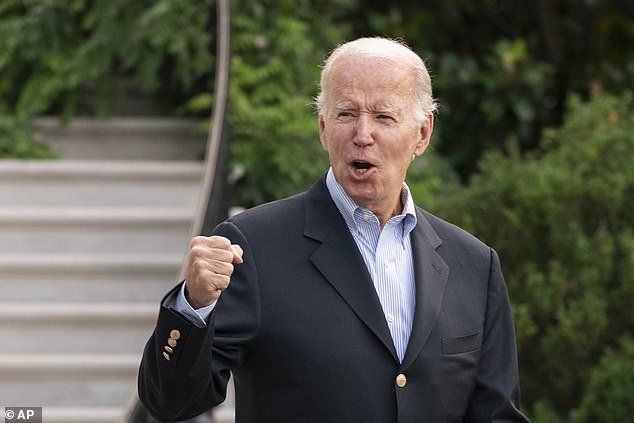 He added, ‘Every amendment that I introduced today has widespread support.’

Democrat Senator Sheldon Whitehouse explained that his party’s goal was to ensure the integrity of the original bill, which came after months of strenuous negotiations – meaning lawmakers would likely be voting down provisions they’d normally agree with.

‘This one is so delicately balanced that ANY amendment, even a “good” one, risks upsetting the balance — so look forward to a lot of “no” votes on things we would ordinarily want. Don’t be surprised,’ Whitehouse wrote on Twitter on Saturday.

Democrat Senator Cory Booker told The Hill that he did a grocery run to ensure people’s needs were taken care of during the marathon session.

‘I went to Trader Joes and bought a few hundred dollars worth of snacks for all the floor staff, for fellow senators and other people working late tonight,’ he said, adding that he bought ‘lots of things with chocolate’ in addition to fruit and nuts.

The package also marks $369 billion for energy security and climate change and $64 billion to extend health care subsidies for the Affordable Care Act.

It leaves $300 billion to reduce the deficit.