WASHINGTON (AP) – Social media giant Twitter told congressional investigators Thursday it has suspended at least two dozen accounts that may have been tied to Russia, but the top Democrat on the Senate intelligence committee was anything but satisfied.

Virginia Sen. Mark Warner said Twitter’s explanations of its actions against Russia-linked accounts were “deeply disappointing,” and he suggested the company doesn’t understand the seriousness of Congress’ investigation into Russian interference in the 2016 election. Warner made the comments after company executives met behind closed doors with staff members of both the Senate and House intelligence committees for several hours.

Warner said that the information Twitter shared “was frankly inadequate on almost every level.”

Twitter’s Carlos Monje, the director of public policy and philanthropy, right, knocks on the door with Colin Crowell, head of global public policy, to enter the closed door meeting with the House Intelligence Committee on Capitol Hill, Thursday, Sept. 28, 2017 in Washington. Officials from Twitter are on Capitol Hill as part of the House and Senate investigations into Russian interference in the 2016 elections. (AP Photo/Alex Brandon)

The disclosures by Twitter follow Facebook revelations that some 3,000 ads were purchased by entities with likely ties to Russia and as congressional investigators are examining the spread of false news stories and propaganda on social media during the campaign.

The committees have been investigating Russia’s election meddling and any possible coordination with associates of Republican Donald Trump in his campaign against Democratic rival Hillary Clinton. They have specifically been looking at Twitter and Facebook and their roles in the spread of misinformation and propaganda during the campaign.

The company said in a blog post that it found 22 accounts corresponding to about 450 Facebook accounts that were likely operated out of Russia and pushed divisive social and political issues during the 2016 U.S. presidential election. Facebook has said those accounts were responsible for buying about 3,000 ads.

Twitter says it also found an additional 179 related accounts and took action against ones that violated its rules. The company didn’t specific how many of those accounts were suspended or the type of action taken. A person familiar with Twitter’s response to the accounts says that most of those accounts were found to have violated the platform’s rules. The person did not know if all 179 had been suspended from the service. The person spoke only on condition of anonymity because the person wasn’t authorized to discuss the information publicly.

Warner said that Twitter’s findings were merely “derivative” of Facebook’s work, and “showed an enormous lack of understanding from the Twitter team of how serious this issue is, the threat it poses to democratic institutions.”

He said the meeting underscored the need for the company to come forward in a public hearing. Both the House and Senate intelligence panels are inviting Twitter, Facebook and Google to testify this fall.

Twitter said it also provided congressional investigators with a “roundup” of ads from accounts used by Russia’s state-sponsored news network, RT. The company said in a blog post that RT spent $274,100 on ads targeted to markets in the U.S. during 2016. Twitter provided the ads, which came from three handles used by RT, to the congressional investigators. Most tweets from the accounts promoted news stories.

In its blog post, Twitter said it has worked harder to detect and prevent spam and “malicious automation.” The company said it removed tweets that were attempting to suppress legitimate votes by telling people they could vote for Clinton by texting. The company said that its automated systems catch more than 3.2 million suspicious accounts globally per week, which is more than double the amount the company detected this time last year.

The top Democrat on the House intelligence panel, California Rep. Adam Schiff, showed less frustration after his own panel’s staff was briefed by Twitter, saying the meeting was “good but preliminary.”

“I think there are challenges to Twitter in its forensic investigation because Twitter users don’t provide the same background information that Facebook users do,” Schiff said. “At the same time I don’t think we’ve more than scratched the surface in terms of our understanding how the Russians may have used that platform.”

Unlike Facebook, which has said phony accounts on its platform attempted to stir up divisiveness in the election, Twitter has remained mostly silent. Twitter allows users to register anonymously and has more public accounts than Facebook. Many lawmakers have expressed concerns about the proliferation of the anonymous “bots.”

Lawmakers have been interested in Twitter’s potential vulnerabilities in terms of tracing potential foreign intrusions. There have been concerns that the company doesn’t move quickly enough to remove posts and isn’t able to track the original postings that were spread and retweeted.

Twitter, Facebook and Google haven’t yet said whether they will accept the invitations to testify publicly before both intelligence panels. The House committee is planning a hearing in October and the Senate committee has invited witnesses to appear on Nov. 1.

Facebook acknowledged in earlier briefings with the intelligence panels that the hundreds of phony Facebook accounts, likely run from Russia, spent about $100,000 on ads aimed at stirring up divisive issues such as gun control and race relations during the 2016 campaign.

Facebook CEO Mark Zuckerberg said last week that the company will provide congressional investigators with the contents of the 3,000 ads bought by a Russian agency, and he pledged to make political advertising on its platform more transparent. 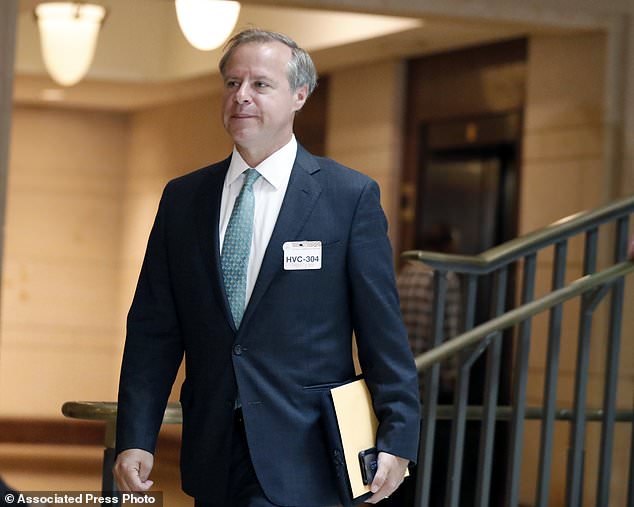 Twitter’s Colin Crowell, head of global public policy, arrives for the closed door meeting with the House Intelligence Committee on Capitol Hill, Thursday, Sept. 28, 2017 in Washington. Officials from Twitter are on Capitol Hill as part of the House and Senate investigations into Russian interference in the 2016 elections. (AP Photo/Alex Brandon) 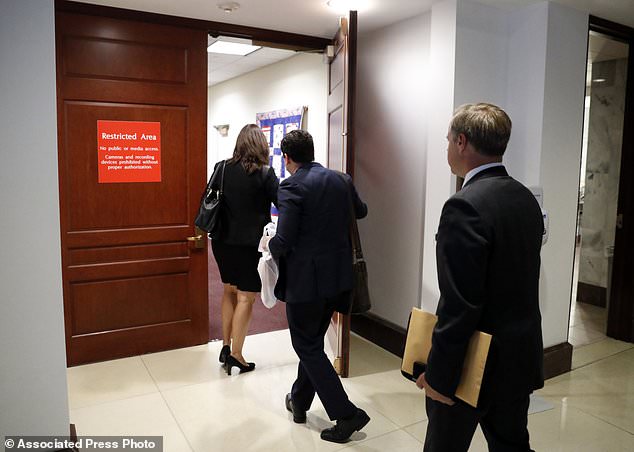 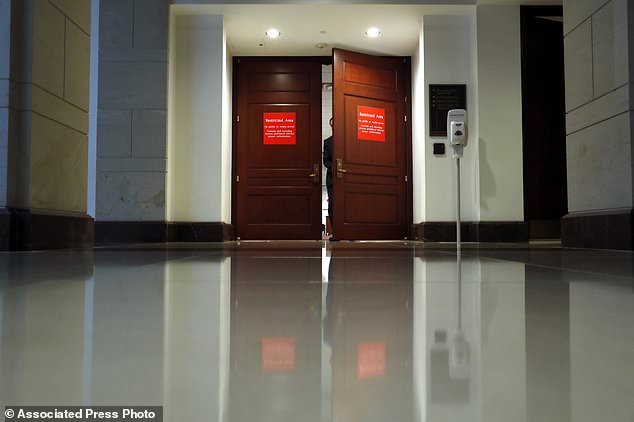 The House Intelligence Committee meets in a secure room and behind closed doors on Capitol Hill, Thursday, Sept. 28, 2017 in Washington. Officials from Twitter are on Capitol Hill for meetings as part of the House and Senate investigations into Russian interference in the 2016 elections. (AP Photo/Alex Brandon) 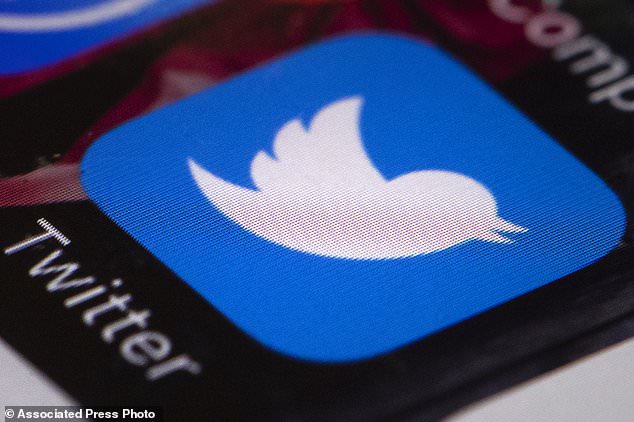 FILE- This April 26, 2017, file photo shows the Twitter app on a mobile phone in Philadelphia. Social media giant Twitter will visit Capitol Hill Sept. 28, as part of the House and Senate investigations into Russian interference in the 2016 elections.. (AP Photo/Matt Rourke, File) 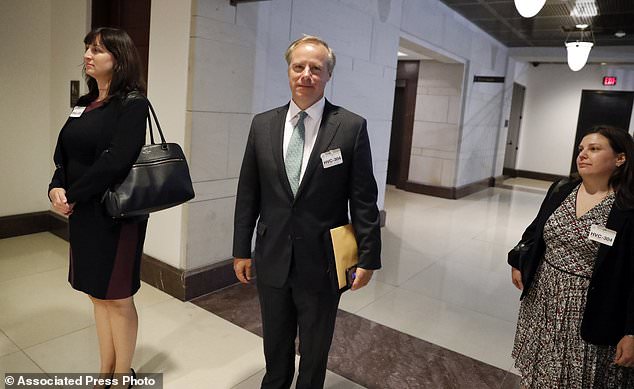