An Australian senator has been banned from Facebook after sharing an anti-Islamic video.

‘This is completely unacceptable and we will fight this,’ he wrote on Twitter.

Senator Anning, a member of Bob Katter’s Australian Party, had posted videos on his social media channels in a bid to end Muslim immigration.

He was condemned for his maiden Senate speech in August where he called for a return to the ‘European Christian’ immigration, in a bid to ban Muslims entering Australia.

Senator Anning referred to the ‘final solution’ – a vote to determine who should enter Australia – which was widely criticised for being strikingly similar language used by the Nazi regime to kill Jewish people.

Dr Abramovich, who denounced Senator Anning’s maiden speech, noted that Jewish people have often suffered from unfair social persecution and have since recognised it is important to stand up against any religious or ethnic group that is targeted for stereotyping and scapegoating. 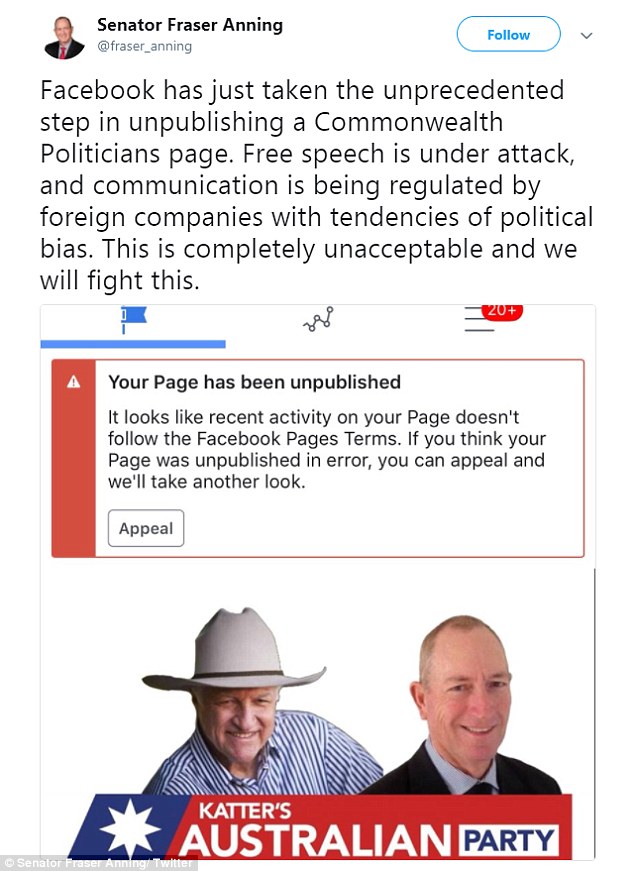 ‘This is completely unacceptable and we will fight this,’ he wrote on Twitter (pictured)

‘Facebook has a responsibility ensure that its platform does not become the weapon of choice for those wishing to use it so as to foment hatred and division,’ Dr Abramovich said.

Senator Anning posted a video to Twitter on Wednesday with the caption: ‘We need to stop Muslim immigration to Australia and ensure the peace and safety of our people.’

The video begins with the senator holding The Quran, which he claims he has read so other viewers don’t need to.