A Missouri lawmaker who posted ‘I hope Trump is assassinated’ on Facebook has publicly apologized and described it as a ‘mistake’.

However she said she had no plans to resign as numerous top Republicans and Democrats in Missouri have insisted.

Gov. Eric Greitens and Lt. Gov. Mike Parson, both Republicans, said on Friday that state senators should oust her.

‘I made a mistake, and I’m owning up to it. And I’m not ever going to make a mistake like that again. I have learned my lesson. My judge and my jury is my Lord, Jesus Christ,’ Chappelle-Nadal, who later deleted from post from her personal Facebook page, told reporters at a church in Ferguson.

She had asked media outlets to not publish the news conference’s location beforehand because she’d received death threats since the post.

‘President Trump, I apologize to you and your family,’ she added. She walked out and didn’t take any questions after delivering her three-minute statement.

Chappelle-Nadal’s post was in response to one that suggested Vice President Mike Pence would try to have Trump removed from office.

She has said she made the comment out of frustration with the Republican president’s response to the recent white nationalist rally and violence in Charlottesville, Virginia, for which Trump said ‘both sides’ shared some blame. 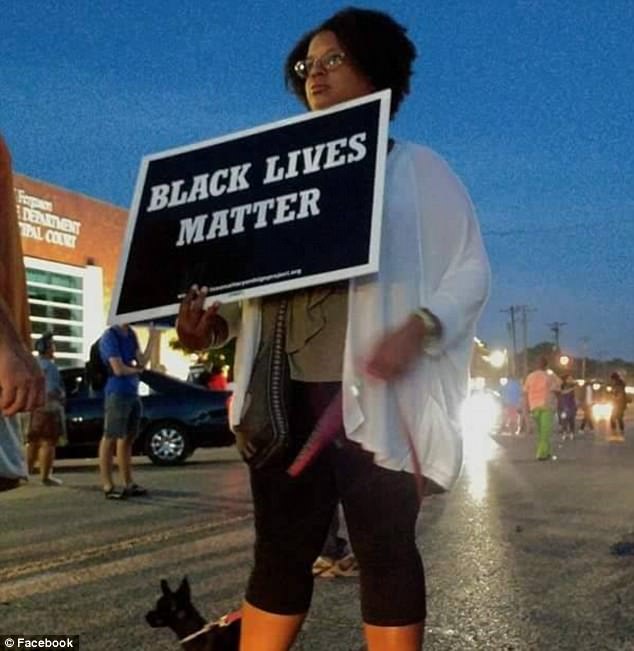 Protest: Chappelle-Nadal said that she wishes she had not posted onto her public Facebook page

Chappelle-Nadal was later questioned by the U.S. Secret Service as part of its investigation into her remarks.

She has told The Associated Press that she let the federal law enforcement agency know she ‘had no intentions of hurting anyone or trying to get other people to hurt anyone at all.’ 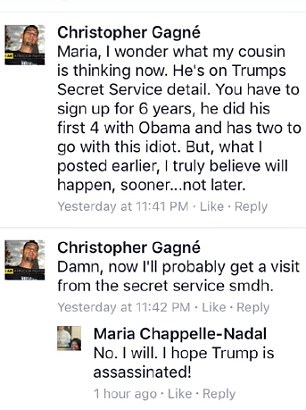 Parson has said he will ask senators to remove Chappelle-Nadal, who lives in the St. Louis suburb of University City, from office if she does not resign by the time lawmakers convene Sept. 13 to consider veto overrides.

The Missouri Constitution says a lawmaker can be expelled upon a two-thirds vote of the elected members of a chamber. But that hasn’t occurred in recent decades, and it’s unclear exactly how it would happen.

Before Sunday’s apology, Chappelle-Nadal had only called the Facebook post ‘improper’ and claimed she was being targeted by the governor and other officeholders because of political expediency or grudges.

‘You know, what I’m reminded of is that we’re all human,’ she said Sunday, seconds before voicing defiance about calls for her ouster.

She also apologized to Missouri residents and her Statehouse colleagues.

‘I will continue to fight for issues that are really, really important,’ said Chappelle-Nadal, who was a prominent voice during the protests in Ferguson after the 2014 police shooting death of Michael Brown. ‘God chooses people for different things, to send different messages.’