Google has terminated its controversial project to set up a search engine in China, an executive told the Senate Judiciary Committee hearing on Tuesday.

Google vice president of public policy Karan Bhatia revealed that ‘Project Dragonfly’ has been scrapped in response to a question from Republican Sen. Josh Hawley about its business with China.

The project faced public backlash as well as widespread criticism from the tech giant’s own staff members, after it was revealed in The Intercept via leaked documents.

‘We have terminated Project Dragonfly,’ Bhatia said of the company’s efforts to expand to the Chinese market, according to Buzzfeed News.

It comes after Donald Trump said earlier on Tuesday that his administration will investigate a claim from Peter Thiel that Google has been infiltrated by China.

Google vice president of public policy Karan Bhatia (pictured) revealed that ‘Project Dragonfly’ has been scrapped in response to a question from Republican Sen. Josh Hawley about its business with China

In response for a request to comment, Google referred to statements it issued in 2019, saying: ‘As we’ve said for many months, we have no plans to launch Search in China and there is no work being undertaken on such a project. Team members have moved to new projects.’

Donald Trump said on Tuesday that his administration will investigate a claim from Thiel, the billionaire founder of PayPal and a major donor to his political efforts, that Google has been infiltrated by China.

He suggested at a Cabinet meeting that his attorney general could ‘maybe take a look’ and said other federal agencies would also be looking into the allegation.

‘Yeah, he made a very strong charge. He’s one of the top, maybe the top expert, on all of those things,’ the president said. ‘And he made a very big statement about Google.’

Trump did not commit the Justice Department to launching a formal inquiry, but he hailed Thiel’s ingenuity and noted that he’s a friend and campaign contributor.

‘We’ll see if there’s any truth to it. But that’s a very big statement made by somebody who’s highly respected,’ he said.

Thiel, 51, made the comments during a speech at the National Conservatism Conference in Washington on Sunday.

A Facebook board member who supported Trump in 2016 and spoke at the Republican National Convention, the tech investor slammed Google for working with the Chinese military while refusing to renew a contract with the Pentagon. He suggested Google’s actions were ‘seemingly treasonous.’ 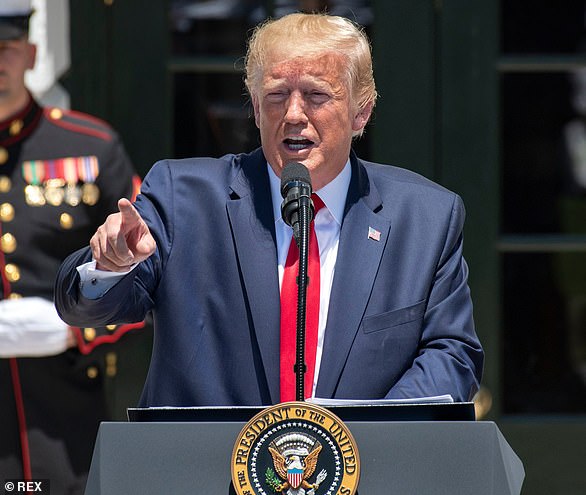 Donald Trump said on Tuesday that his administration will investigate a claim from Peter Thiel, the billionaire founder of PayPal and a major donor to his political efforts, that Google has been infiltrated by China

Google admitted last year it had been looking at options to build a specialist search engine in China, but said there were no current plans to launch it.

However allegations from insiders at Google claimed they have discovered hundreds of code changes on the project.

This suggested that the project was still being worked on in secret.

Google employees who looked into the latest status of Project Dragonfly claimed that budgets for the project still contained 100 personnel names.

Around 500 alterations to the code used on the project were made in December 2018, followed by 400 more at the start of this year, company insiders said.