As President Donald Trump’s impeachment trial tests the limits of Senators’ endurance, the chamber’s ‘candy desk’ is giving them a much-needed sugar boost.

On Tuesday, the first day of arguments in the trial stretched for more than 12 hours, well into the wee hours of Wednesday.

Although food and coffee are forbidden inside the august chamber, a secret ‘candy desk’ has been stocked with sweet treats since 1968.

As well, obscure Senate rules dictate that milk is the only beverage besides water that is allowed in the chamber — though it was unclear whether any senators took advantage of the dairy loophole on Tuesday.

As President Donald Trump’s impeachment trial tests the limits of Senators’ endurance, the chamber’s ‘candy desk’ (above) is giving them a much-needed sugar boost 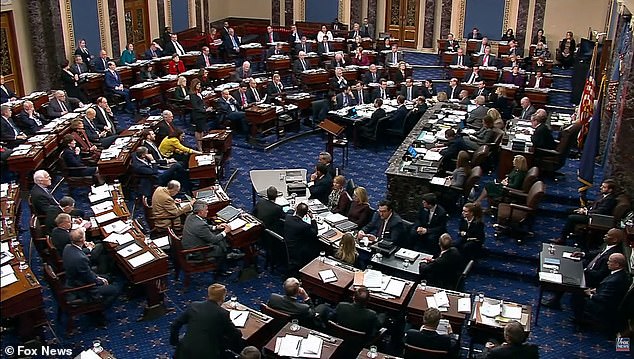 Senators are not allowed to bring food or coffee into the chamber, but the rules do allow candy and milk. Tuesday’s arguments stretched beyond 13 hours in a marathon session

The candy desk – filled entirely with confectioneries – is situated near the entrance on the Republican side of the Senate chamber, and has been stocked by Republicans ever since Senator George Murphy first started stowing sweets in its drawer in 1968.

Murphy was a Hollywood actor, singer and dancer who was later elected a United States Senator from California. When he lost his seat in 1971, the candy-desk duties were passed on to a string of successors.

For the Democrats to now take control of the desk they would need to win 80 seats, whereas the Republicans only need 20 seats to keep it.

A floorplan of the Senate chamber shows the candy desk is located at seat 24, where it has been since the 80s.

The desk is currently occupied by Pennsylvania Senator Pat Toomey. It’s his office’s job to restock the desk drawer with candy. 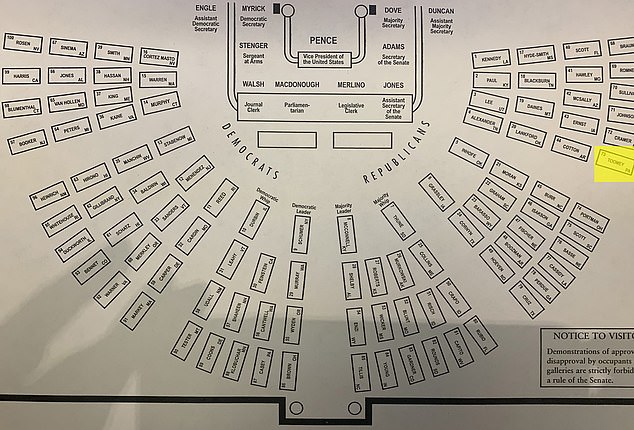 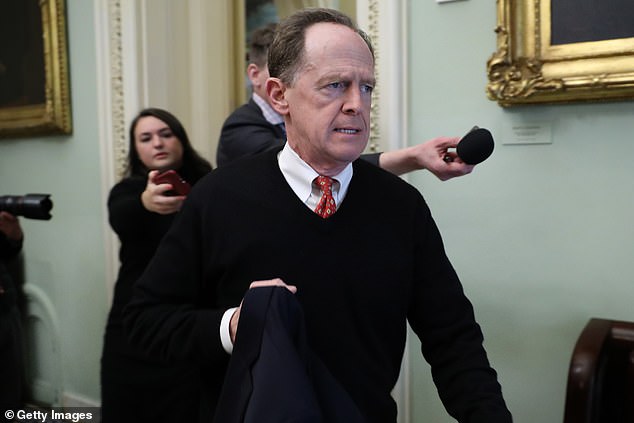 The candy desk is currently occupied by Pennsylvania Senator Pat Toomey (above). It’s his office’s job to restock the desk drawer with candy

Toomey reportedly asked to be placed at the candy desk because his state is home to Hershey’s – the largest chocolate manufacturer in North America – and more than 200 other confectionery companies.

The candy is donated to the Senate and doesn’t have to be paid for from office budgets.

While coffee and other non-water beverages are banned on the Senate floor, an arcane loophole does allow senators to drink milk in the chamber.

The milk exemption dates back to 1966, when Senator Everett Dirksen received permission from the presiding officer to have a ‘tall glass of milk.’