Senior coroner, 69, killed herself with a lethal morphine dose

A senior coroner took her own life with a lethal dose of morphine after fears her reputation would be ruined by a colleague left her a ‘broken lady’, an inquest heard.

Professor Jennifer Leeming, 69, was found dead by her husband Michael Turner at their home in Alderley Edge, Cheshire in January – just five months before she was due to retire.

The lawyer, who had worked as a coroner for 18 years, had been worried she might become embroiled in a scandal after a staff member made ‘complaints and allegations’ against her to a local newspaper, the inquest heard.

In the days before her death, it was said Professor Leeming told a fellow coroner ‘I just don’t have the fight in me’. The circumstances of the complaints made against her are unknown as they were never published.

Professor Jennifer Leeming (pictured), 69, was found dead by her husband Michael at their home in Alderley Edge, Cheshire in January

Tests showed the coroner had toxic levels of morphine in her system when she died, and it is believed she used knowledge learned at inquests about the substance to take her own life.

She had also previously joked about a vial of morphine she secretly kept at home to take in case she was struck down by a terminal illness, the inquest heard.

Professor Leeming became a coroner in 2001, and had presided over hundreds of hearings throughout her 18-year career.

The mother-of-one also lectured at Bolton University’s School of Law and served as a non-executive director of East Cheshire NHS Trust.

The incident took place on January 3 this year, just two weeks after Professor Leeming heard about the allegation made against her when speaking to officials at Bolton Council.

Fellow coroner Alan Walsh said: ‘December 21 was a defining time for her. She came to see me at lunchtime and told me about a complaint and allegation made by a member of staff which was direct to a local newspaper.

‘She had immediately gone to the Council telling them what she knew but the council were not concerned about the complaint and gave her their full support.’ 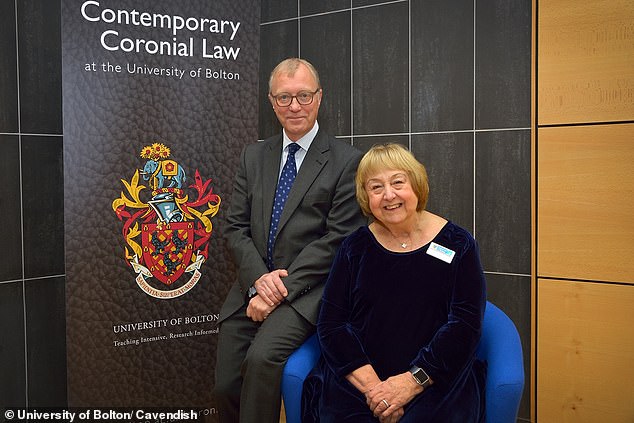 She had been worried she might become embroiled in a scandal after ‘complaints and allegations’ were made against her to a local newspaper, the inquest heard (Pictured: Professor Leeming and Sir Ernest Ryder)

After she took a break from work over Christmas, Professor Leeming and Mr Walsh arranged to meet on December 30.

Here, she told him she would be away from the office for a few more days due to palpitations she had been suffering.

Professor Leeming then arranged to come into work on December 31 to ‘tell the staff about her health problems’.  Mr Walsh said she seemed better ‘both physically and in her demeanour’ and told her staff they wouldn’t see her ‘for a few days’.

He said: ‘I later went to see her in her office and she talked about the palpitations and the issue and I tried to talk her round and said said to her there was nothing in it and told her to get better and face these things.

‘I said there was nothing to worry about but she said she didn’t have the strength and when I said “you have to get up and fight”, she said “I don’t have the fight in me”.

‘She was a broken lady which was totally out of character for her. People know how strong she was and this would never have been seen before. I still believe this was her health exacerbated by this issue.’ 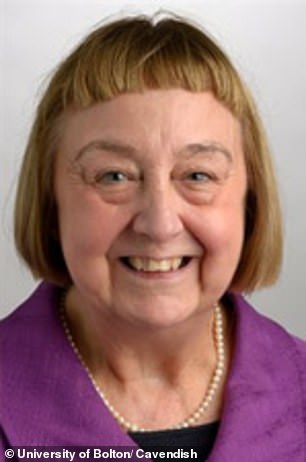 In the days before her death, it was said Professor Leeming told a fellow coroner ‘I just don’t have the fight in me’

Professor Leeming’s husband Michael told the inquest that his wife had described ‘pressure at work’ and ‘feeling more tired than usual’ ahead of her death.

He said the pair had spoken about the idea of her retiring at 70 rather than 75, and he was ‘surprised’ when she said she would leave her job on her 70th birthday.

‘She referred to the pressure at work and feeling more tired than usual. Jennifer wanted to work until she was 75 but before her death she decided to take early retirement on health grounds. It wasn’t a sudden decision’, he said.

‘The palpitations were causing her to feel more tired and stressed and towards the end of December it seems that things were getting out of hand.

‘I thought she would benefit from a break from work and some time off in January to get herself back to her normal self.’

But Mr Turner said there was ‘an issue at work’ on December 21.

He said: ‘It was something she became aware of and at the time I thought it was a nuisance over Christmas. She was annoyed and she was upset. She went into the office on December 30 and I went with her because of the palpitations and her general feeling of exhaustion and tiredness.

‘She wanted to discuss these points with Mr Walsh and to address the staff personally to say she would be away for a period of a few weeks rather than let the message filter out. My impression was that she immediately seemed to be more relaxed and at ease and the evening of January 2 she seemed to me to be more relaxed.’

On the night before she died, the couple had been listening to Mozart and had a glass of wine, and Mr Turner said his wife had not complained of nausea or pain.

He said: ‘I think at around 8pm I said to her ‘do you want something to eat’ and she said “No I am feeling tired, I think I might have an early night”. We poured another glass of wine and both went upstairs and read on our iPads and I think about 9pm she said: “I’m ready to go to sleep now”. I was still wide awake and went downstairs.

‘She seemed relaxed and I thought this was good because of the decision to retire. On January 3 I woke up at about 7.30am by one of the cats tapping on my nose and I went straight down to the kitchen to make us both a cup of tea.

‘I brought them upstairs and I said something like: “Morning Jennifer” but there was nothing and I knew straight away something was seriously wrong.’

Mr Turner said his wife ‘didn’t indicate’ she was planning to ‘harm herself or take her own life’ ahead of her death.

‘She didn’t mention anything about morphine and I was absolutely not aware she had any morphine’, he said.

Recording a conclusion of suicide, Cheshire coroner Alan Moore said: ‘Mrs Leeming was a coroner of vast experience, she was kind, compassionate and a dedicated professional.

‘She made a real difference to many people’s lives. She cared deeply about people and will be very much missed, but her legacy will endure.’

For confidential support, call the Samaritans on 116 123 or visit a local Samaritans branch. See www.samaritans.org for details.