A second wave of coronavirus will cause more suffering than the first, according to Professor Carrie MacEwen, chair of the Academy of Medical Royal Colleges

A second wave of coronavirus will cause more suffering than the first if Britons don’t physically distance and wear face masks, according to the UK’s top doctors.

The warning comes after the Government was accused of sending mixed messages about face coverings and returning to work.

Medics believe there will be a deadly resurgence of Covid-19 during the colder months, when the virus finds it easier to survive and spread because people spend more time indoors.

They say this, combined with a seasonal flu outbreak and a huge backlog of patients waiting for treatment due to delays during the pandemic, could devastate an already-stretched NHS.

Boris Johnson announced his plans to get the country back to normal by Christmas, with Britons being encouraged to go back to work and almost all amenities reopening by July 25. The PM also revealed plans to get live crowds back at sporting events and concerts in the coming months.

But the announcements were met by an outpouring of criticism by scientists who say the virus is still ‘rife’ and people becoming complacent could fuel a second epidemic.

Professor Carrie MacEwen, chair of the Academy of Medical Royal Colleges, said medics and healthcare workers were ‘totally reliant on the public understanding that this has certainly not disappeared and could come back and cause even more suffering for the population’. 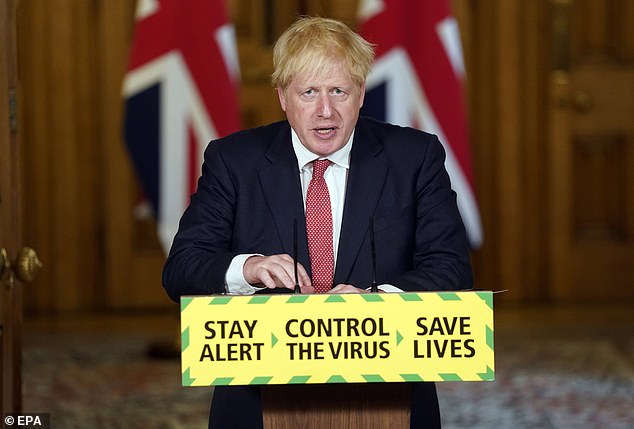 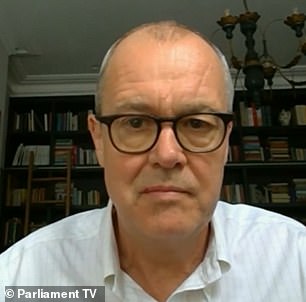 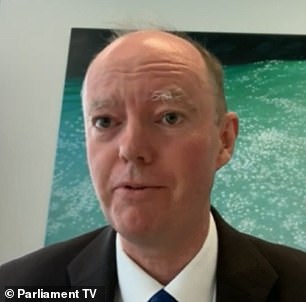 Sir Patrick Vallance, the chief scientific adviser to the Government, and Professor Chris Whitty, chief medical officer, today appeared in front of the House of Lords Science and Technology Committee

Dr Alison Pittard, head of the Faculty of Intensive Care Medicine, told the Guardian: ‘People might think Covid is over with, why do I have to wear a face mask,. But it isn’t over. We still have Covid patients in intensive care.

‘If the public don’t physically distance and don’t wear face coverings we could very quickly get back to where we were earlier this year.’

Face masks will be mandatory in shops in England starting on Friday and anyone who flouts the rules could face £100 fines. Face coverings have been compulsory on public transport since last month.

Up to 120,000 Britons could die in ‘worst-case scenario’ second wave

Doctors have demanded ministers set out a clear strategy to prevent a second Covid-19 wave amid fears it could kill triple the number of Brits as the first outbreak.

A report done on behalf of  Number 10’s chief scientist Sir Patrick Vallance warned of at least 120,000 more deaths this winter in a ‘reasonable worst-case scenario’.

But the grim prediction only looked at hospital deaths and did not factor in fatalities in care homes – which have accounted for a third of the near-45,000 lab-confirmed coronavirus deaths so far.

The report laid out 20 steps the UK Government must take to mitigate the chance of the deadly resurgence – including stocking up on PPE, vaccinating millions more Britons against the flu and rapidly improving contact tracing.

But the Royal College of GPs claimed medics have been left in limbo without clear guidance about how they should get ready for a second influx of coronavirus patients.

Professor Martin Marshall, chair of the RCGP, said the College needed reassurances immediately that staff and patients would be protected if the crisis spirals back out of control.

He added: ‘The College has been advocating for comprehensive planning to ensure the UK is prepared for a potential second wave or local peaks of the Covid-19 virus.

‘We will do what is necessary, in the best interests of patient care, but we need to know what the plans are and have the appropriate guidance and resources to swiftly respond to a second wave of the virus, mitigating its potential severity and helping to keep patients and their wider communities safe.’

But they are not being required in offices because ministers believe they would offer little protection when someone spends hours beside an infected co-worker.

Dr Chaand Nagpaul, council chair of the British Medical Association, said: ‘Everyone has their role to play, but there needs to be clear, concise public messaging.

‘To introduce measures for shops, but not other situations where physical distancing is not possible – including some workplaces – is illogical and adds to confusion and the risk of the virus spreading.’

The Government only U-turned on face masks last month, after telling the public throughout the crisis there was no scientific evidence they worked.

SAGE says the UK’s new infections are shrinking at a rate of between 1 and 5 per cent per day.

But at least 1,700 people are still getting infected every 24 hours in England alone – a figure that has not changed in a week.

And on Sunday, the Scottish Government recorded a rise in new cases for the fifth day in a row, with 23 people testing positive – the highest daily rate since 21 June.

Both Sir Patrick and chief medical officer, Professor Chris Whitty, have since said the coronavirus challenges in the UK will be ‘very much greater’ in the winter because the season ‘benefits’ the virus.

Sir Patrick told members of the House of Lords on Friday: ‘As you release measures it is inevitable as you get more contacts that you will see more cases… Come winter, the challenges will be very much greater and of course there is a risk that this could need national measures’.

His counterpart, Professor Whitty, also hinted lockdown rules might return as colder weather sets in, explaining people may have ‘a group of things you could do for three seasons of the year but it may be that in winter this is more difficult’.

During his address to the nation last week, Mr Johnson hevaily encouraged all workers to return to their offices if it was safe to do so.

But he stopped short of ordering them to return after Sir Patrick said there was ‘absolutely no reason’ to change the existing policy of people working from home.

Meanwhile, experts are growing concerned that the NHS contact tracing system is up to scratch yet to deal with the constant easing of lockdown measures.

It emerged over the weekend that tracers have only been finding 37 per cent of infected patients.They need to track down at least half to keep the outbreak squashed.

The system, considered paramount to keeping a lid on local outbreaks and avoiding a national lockdown, is also reaching half of people in Blackburn – which is being kept under review amid rising cases.

Professor Dominic Harrison – public health director of Blackburn with Darwen Council – revealed the figures over the weekend, and warned of an ‘exponential growth’ in cases if it didn’t become more efficient.

The Department of Health defended the system, with a spokesperson saying: ‘It has already helped test and isolate more than 180,000 cases – helping us control the spread of the virus, prevent a second wave and save lives.’

Fewer than half of contacts were reached in Oldham, St Helens, Manchester and Rochdale, according to a leaked report seen by The Independent.

One in three office workers want to continue working from home after coronavirus threat is over, survey reveals

One in three office workers want to continue working from home after the coronavirus threat is over, a survey has revealed.

The study from the Centre for Economics and Business Research (CEBR) found that between 25 per cent and 30 per cent of employees will be working from home on any one day in 2021, as reported by The Telegraph.

The survey also showed a strong demand from Brits for more flexible working, up from a tenth in 2019, with 32 per cent of people expecting to at least partially work from home even after the pandemic has eased.

Pablo Shah, a senior economist at the CEBR, told the newspaper: ‘This seismic shift, taking place in months rather than decades, will transform the worlds of property, transport, retail, leisure and, not least, fashion. Ten years ago, this would not have been possible.’

It comes as Boris Johnson altered guidance on Friday for home workers in an effort to get them back to offices and save Britain’s High Streets which continue to be deserted despite the easing of lockdown restrictions. 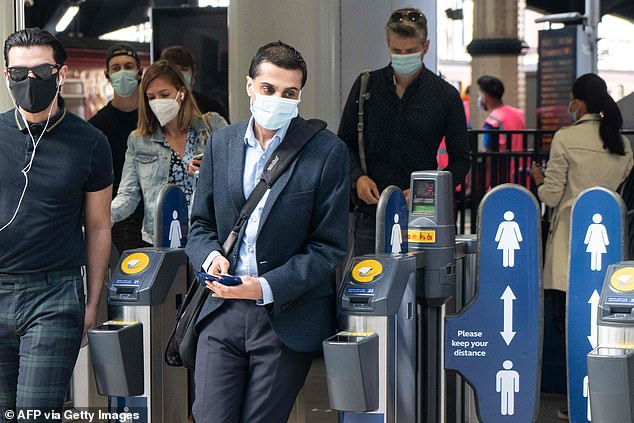 Fewer than one in six workers in cities have returned to the office – fuelling fears over the survival of cafes, pubs and restaurants.

He then went even further as he said many companies had found working from home had not been ‘detrimental to productivity’ and as a result there is no need to move away from the policy.

Yesterday the Foreign Secretary admitted there will be more remote working even after the coronavirus threat has passed.

But stressed that the country was in the middle of a ‘severe economic downturn’ and it would help if fewer people worked from home now that the virus is receding. 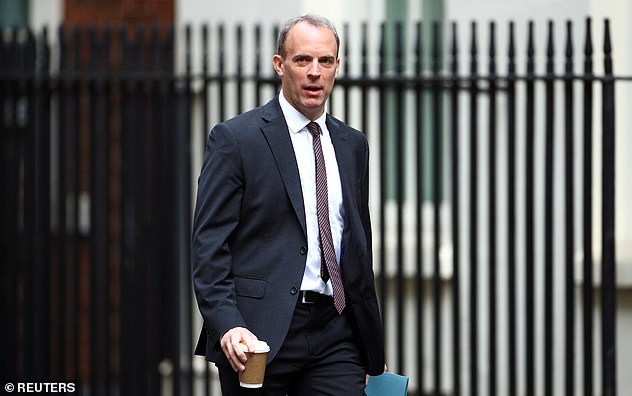 However attitudes to returning to the office appear to be changing, poll released at the weekend has suggested.

It found 54 per cent believed it was worth the risk of travelling back to work to avoid an economic crash, the Sun on Sunday found.

In an interview at the weekend, Boris Johnson said he wanted to avoid a second nationwide lockdown, comparing it to a ‘nuclear deterrent’.

He told the Sunday Telegraph that he ‘certainly’ does not want another blanket shutdown and ‘nor do I think we will be in that position again’.

The new guidance states that from August 1, employers can urge workers to come back to their office so long as it is Covid-secure.

Mr Raab said yesterday on BBC1’s Andrew Marr Show: ‘What we have said is from August 1, while we’re carefully monitoring the virus, we do need to get the economy back firing on all cylinders as best we can. 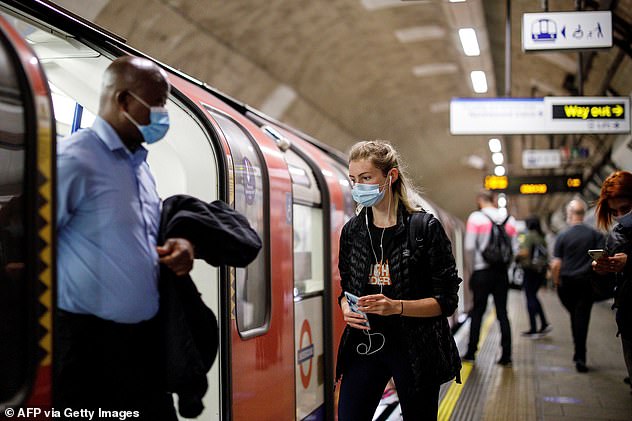 ‘We know we’re in the middle of a severe downturn. And so we’re making sure, with employers, that they’ve got the Covid-secure workplaces in place and we’ve had great co-operation from business.

‘And we’re also saying to employers – you’ve got this remote working facility, we know that’s important. I think we’ll all do a bit more remote working in the future.

‘But we also trust employers to say, ‘Actually, do you know what? We do need more people coming back to work’. And therefore we’re giving them that discretion. I think that’s right.’

Some of Britain’s largest employers say they will allow staff to work from home for months to come.

In London, only one worker in eight has gone back. In the City, just 800 of Goldman Sachs’ 6,000 London staff have returned.

Fewer than 2,000 of the 12,000 at JP Morgan are back. The figures come from an analysis of mobile phone data in 67 cities by the Centre for Cities think-tank on behalf of the Times.

The data suggests that Basildon in Essex has seen the highest proportion of staff go back, at 49 per cent, and Edinburgh the least at 12 per cent.

Workers in the biggest cities are the least likely to have returned amid fears over the risk of long commutes on public transport.

The figures correspond with official data showing that rail services were operating at only 16 per cent capacity. The roads are back to 86 per cent of normal levels.

Andrew Carter, of Centre for Cities, said: ‘Many office workers understandably will continue to work from home even as Covid-19 restrictions lift, and whilst this may well be the right decision for them as individuals, for the national economy the sum of these decisions will have a cost.’