One of the top cops in New South Wales has allegedly been glassed in the face by a former officer while at a funeral in a country town.

Peter McKenna, who was recently promoted from Superintendent to Assistant Commissioner, was at a pub in Dubbo in central NSW on Friday to farewell Sergeant Bradley Edwards, who took his own life.

Current and former officers were sharing drinks at the wake held at the local pub following the funeral service.

As the night went on the former officer and Mr McKenna started arguing before the ex-policeman allegedly smashed a bottle over the superintendent’s head, police sources told the Daily Telegraph.

Peter McKenna, who has recently been promoted from Superintendent to Assistant Commissioner, was allegedly glassed in the face by a former police officer in Dubbo on Friday night

Mr McKenna was rushed to Dubbo Base Hospital at around 11pm after emergency services were called. 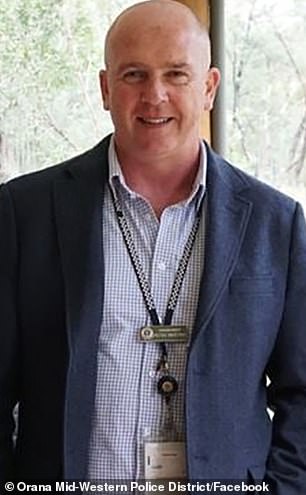 He received treatment on his face while at hospital and is believed to have received several stitches.

NSW Police said a 45-year-old man had been charged with wounding a person with intent to cause grievous bodily harm.

The 45-year-old appeared at the Dubbo Local Court on Saturday and will face court again on June 30.

The alleged attack on Mr McKenna came just days after he was promoted to assistant commissioner of the northern region.

‘He is receiving ongoing care and looks forward to resuming duties at the appropriate time,’ he said.