Sensor worn on the thumbnail could prevent skin cancer

A sensor worn on the thumbnail could prevent skin cancer by alerting wearers when they are getting too much sun exposure.

The battery-free UV Sense device detects radiation from the sun and changes colour to show how high levels are.

By measuring how long a wearer has been outside, the device, which is less than 2mm thick and 9mm in diameter, encourages users to reapply sun cream when scanned by a user’s smartphone.

UV Sense, which launched in the US last week, is due to be available in the UK in 2019. Its price is unclear.

Melanoma, which is the most serious form of skin cancer and often spreads, affects more than 15,000 new people every year in the UK. Its main cause is overexposure to UV light. 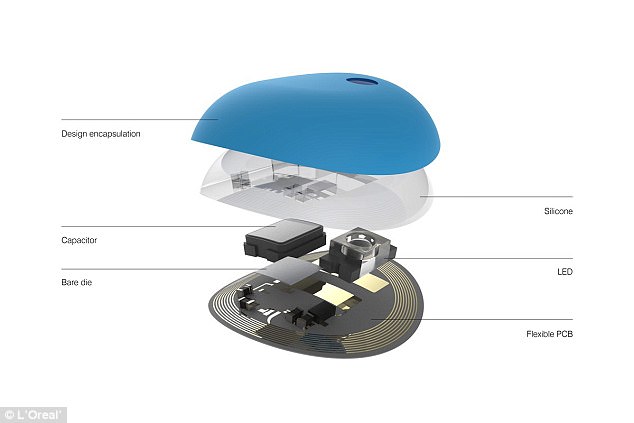 UV rays activate a sensor that collects UV absorption information in the capacitor, which stores electrical energy. This is transmitted to a smartphone that gives exposure information

HOW DOES UV SENSE WORK?

It also has a capacitor, which stores electrical energy.

UV rays activate the sensor, which collects UV absorption information in the capacitor.

The antenna then transmits this data to the app via the user’s smartphone antenna, which is activated by tapping or waving the phone close to the thumbnail device.

Measuring both UVA and UVB rays, the app gives a score that predicts the radiation’s intensity and gauges the risk of negative skin outcomes, such as sunburn and wrinkles.

Users can first enter information that describes their skin type to determine how sensitive to the sun’s rays they are.

When setting up the device, a connecting app asks users about their skin type to get an idea of how much sun exposure they can tolerate.

The device then recommends sun-safety products and gives general advice.

UV Sense, which can be worn for up to two weeks, also stores three months of UV ray data, allowing users to see ‘sun’ trends in their local area.

As it is powered by smartphones, being both Android and iPhone friendly, the device does not require any batteries and is activated by UV radiation.

Guive Balooch, global vice president of L’Oreal’s Technology Incubator, which manufacturers the device, said: ‘Armed with research and consumer insights from My UV Patch, we set out to create something that blended problem-solving technology with human-centred design.’

L’Oreal launched My UV Patch in 2016, however, unlike the patch, UV Sense provides real-time information.

Consumer studies show My UV Patch, which can only be worn for a few days, has a positive impact on the sun-safety behaviours of users with 34 per cent applying sun cream more often and 37 per cent trying to stay in the shade more frequently.

This comes after researchers from Brown University found just one glass of wine a day can increase the risk of certain forms of skin by up to 11 per cent.

For every extra 10g of alcohol a day, the risk of developing basal cell carcinoma (BCC) rises by seven per cent and cutaneous squamous cell carcinoma (cSCC) by 11 per cent, they found.