Despite sounding like one of Park Chan-wook’s more whimsical works, Korean Cowgirl is actually a ‘smokehouse with a difference’, sitting in the shadow of Canterbury Cathedral. According to the website blurb, the restaurant was started ‘by a couple of very well-travelled friends, who had a passion to serve up truly great world cuisine’. Don’t we all. But there being a lot to choose from and all that, they decided to narrow it down to Korean fried chicken and Texas barbecue. Two things I love very much, provided, of course, they’re done properly. 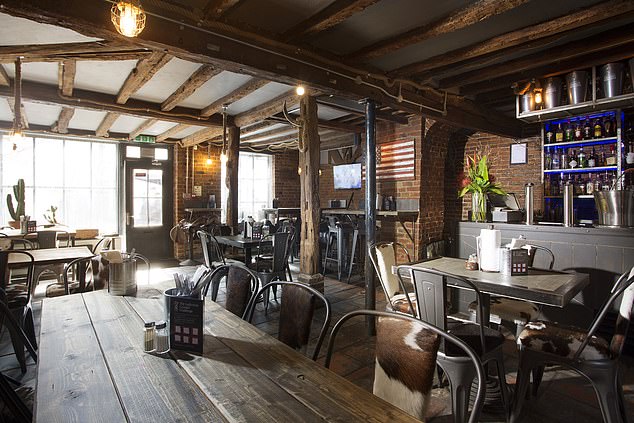 The room certainly embraces this cross-cultural melée, with a cheerful, clichéd charm

Both Korea and Texas have fine barbecue traditions, although the former involves direct heat (usually DIY, at the table), and the latter low, slow and indirect cooking. Still, as culinary bedfellows go, they’re not entirely incongruous. And the room certainly embraces this cross-cultural melée, with a cheerful, clichéd charm. A star-spangled banner adorns the bare-brick wall, chairs are backed with ponyskin, while stools are topped with western saddles and country and western twangs from the stereo.

Korea’s contribution is rather more meagre, confined to pouting, androgynous teenagers gazing moodily from TV screens, mouthing rubbish K-pop. In the men’s loos, there are a couple of Athena-style posters featuring scantily clad ladies. Rather more ass than Seoul.

In the wrong hands, the whole place could be as cloying as supermarket barbecue sauce, with all the subtlety of liquid smoke. Especially as the menu bangs on, like a pervy, drunken uncle, about ‘The Cowgirl’s Baps’ (phwoarr, fnarr fnarr etc). Vegetarian dishes – miso aubergine, superfood salads – are lumped under ‘The Angelic Cowgirl’, while puddings suffer under ‘Sweet Dreams’. Urgh. But this is no cynical chain, rather a small, independent restaurant with genuine soul. It takes balls to open a barbecue place in a city where archbishops rather than applewood rule supreme. Especially if you’re going to try to take it seriously, with meat smoked fresh every night.

The place is fairly empty on this particular Friday lunch, but our lovely waitress makes up for any unfilled seats. Dinners are a different matter, she tells us, and there’s already a waiting list for tonight’s service.

Joe has just got back from a Texas barbecue pilgrimage (he describes himself as ‘half man, half brisket’), which does rather up the ante. Canterbury’s a long way from Lockhart, and it would be unfair to judge Korean Cowgirl alongside the very best of the Lone Star State. Still, bad brisket is bad brisket, be it in Kent or Corpus Cristi.

We start with good pickles, sweet and sharp. And some half-decent pulled pork (yeah, yeah, I know we’re venturing away from Texas and into North Carolina, but you’d hardly expect strict regional authenticity in a place that promises ‘smokehouse fusion’), a dish now so thoroughly debased that I usually cross streets to avoid it. There’s a whiff of real smoke and a luscious, fatty softness, although there’s little need for the lazy splodge of commercial barbecue sauce. An eastern-style vinegar and pepper sauce would do just fine. 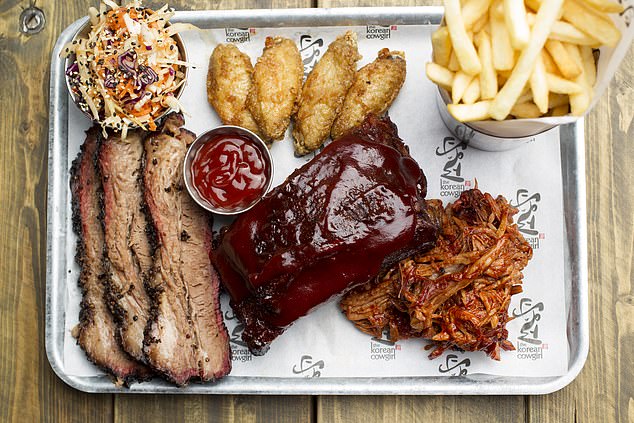 The Cowgirl platter. It takes balls to open a barbecue place in a city where archbishops rather than applewood rule supreme

A ‘heirloom’ tomato salad (will someone please take ‘heirloom’ anything out the back, offer them one last fag before shooting them in the back of the head?) is dull and flaccid. But beans with burnt ends – sharp tomato tang meets low growl of wood smoke – are as Texan as a cowboy’s swagger. Ribs are decent too. I once spent a day in Lynchburg, Tennessee, training to become a certified judge of the Kansas City Barbeque Society (the one true authority, despite what those rogues at WCBCC may claim). So I could take my seat at the Jack Daniel’s Invitational, arguably the most prestigious competition of them all. After standing up, placing my hand over my heart and swearing allegiance to ‘truth, justice, excellence in barbecue and the American way of life’, I learned that perfectly cooked ribs should have meat that neither flops off in one piece (overcooked) or gleans to the bone too tightly (underdone). The flesh should peel away with a small tug of the teeth. And these ribs are well cooked, but need a bit more smoke. Not raging bonfires, rather evidence of time well spent in the pit. Still, they’re way superior to the usual ersatz rubbish, and beat Bodeans with ease.

Brisket is way above average too. Not SmokeStak brilliant, but then nothing in the UK ever is. We go for the fattier cut, the ‘point’, and it’s smoked by someone who knows their ’cue. Again, they need more smoke (and a little less salt), but there’s the beginning of that all-important pink-hued smoke ring. Joe reckons it could do with an hour or two more. But not bad, he says. Really, not bad at all. With a few very minor fiddles it could be very good indeed.

The Korean fried chicken, though, is merely average, bearing little resemblance to the stuff I’ve eaten in Seoul. Or London, New York or Los Angeles. The wings are crisp enough, but lack punch and crunch. Ours are supposed to be ‘spicy’, but possess all the kick of a limbless mule.

Despite this, we couldn’t help falling for Korean Cowgirl. She wears her passion on her gingham sleeve, and that cheery enthusiasm is infectious. If I owned the place, I’d drop Korean and concentrate on Cowgirl. To create bona fide Canterbury barbecue. A taste of Texas in the heart of Kent. Now that really would be something to relish.

Goulash soup for lunch at Hotel Valluga in Zürs, Austria. Then schnitzel and chips for dinner at the wonderful Hotel Erzberg, Zürs, where we’re staying.

Sublime ham and egg with rösti at Hirlanda Hotel in Zürs.