Patients are twice as likely to die from sepsis in some hospitals as they are in others, statistics obtained by MailOnline reveal.

Sepsis death rates at Tameside and Glossop NHS Foundation Trust in Ashton-under-Lyne are 55 per cent higher than expected.

At the other end of the scale, sepsis has claimed 39 per cent fewer lives than officials predicted at the University Hospitals of North Midlands NHS Trust.

When compared, it means the chance of dying from sepsis in Tameside is about twice that of a similar patient treated at the Staffordshire site.

His findings, disputed by the NHS, suggest a ‘postcode lottery’ of care is consigning hundreds, or even thousands, of patients to an early grave.

It also reveals a stark North-South divide, with most of the worst performing hospital trusts concentrated in the north of England.

The worrying data shows 16 hospital trusts across the country to have a ‘significantly high death rate’, with only four situated in the south.

The figures heighten the The Mail’s ‘End The Sepsis Scandal’ campaign, which began last year in an attempt to reduce the number of missed cases of sepsis.

Scroll down to see how your trust rated

Sepsis death rates at Tameside and Glossop NHS Foundation Trust in Ashton-under-Lyne are 55 per cent higher than expected. At the other end of the scale, sepsis has claimed 39 per cent fewer lives than officials predicted at the University Hospitals of North Midlands NHS Trust

Professor Jarman used NHS data to come to his conclusion. It involved 134 hospital trusts in England, with four not having enough statistics to meet his criteria.

Sepsis deaths at Tameside and Glossop NHS Foundation Trust have been higher than expected over the past three years, given the population it serves.

At this trust, 141 sepsis deaths were recorded over a three-year period – 55 per cent higher than the expected figure of 91.

THE 10 WORST (AND BEST) TRUSTS

In Wrightington, Wigan and Leigh NHS Foundation Trust, deaths have been 43 per cent higher than expected over the same time frame.

And a 35 per cent spike has been recorded at the Dudley Group NHS Foundation Trust, according to Professor Jarman’s analysis.

Between 2014 and 2017 it recorded 39 per cent less deaths than expected. Some 184 people died of sepsis between the trust’s two hospitals.

How were the findings calculated?

The method Professor Jarman used to make the projections is recommended by the Association of Public Health Observatories.

A similar process helped uncover poor care at the Mid Staffordshire trust, which was at the centre of one of the biggest scandals ever to hit the NHS. 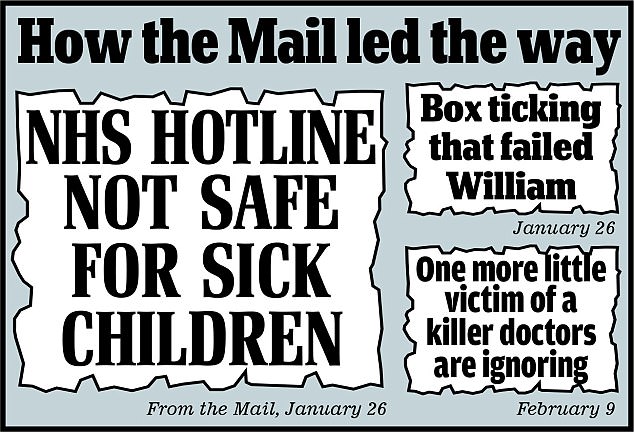 Under that system, a trust is regarded as having a high death rate only if its measure, called the Summary Hospital-level Mortality Indicator, or SHMI, is about 12 per cent or more above the national average.

In contrast, the Byar’s method is much stricter, classing anything with a SHMI of more than six or seven per cent above the national average as significantly high.

Up to 1,200 people needlessly died at Stafford hospital, ran by Mid-Staffordshire NHS Trust, due to poor care between 2005 and 2009.

In what is one of the worst care scandals in living memory, patients were left lying in their own excrement and so thirsty that they were reduced to drinking water from vases.

It later emerged that just one senior nurse was in charge of 84 beds at the scandal-hit hospital. The findings prompted significant changes in hospital care.

The expected deaths at each hospital trust is worked out by calculating how many deaths the trust would have if they had the English national average death rates.

The death rate is then calculated by dividing the actual deaths from sepsis by the expected deaths for sepsis, Professor Jarman explained.

Only primary diagnoses of sepsis are recorded for the observed deaths, excluding thousands of cases where the violent immune response was partly responsible.

This explains why just 40,417 deaths were recorded over the three-year time frame – notably less than the 44,000 expected each year.

What did the NHS say?

Chris Roebuck, head of profession for statistics for NHS Digital, said, ‘We transparently publish our data in a variety of forms in order to enable others to conduct their own analysis, although we could not comment on this methodology with the information we have been provided.

‘The findings from any analysis of SHMI or its underlying data should act as a starting point for further investigation, rather than treated as a definitive view on quality of care.

‘A variety of factors could influence Trusts’ figures, such as the way they record particular conditions.

‘For example, we do know that sepsis has historically been recorded differently by different trusts with some clinicians coding for sepsis, while others code for the underlying infection, such as pneumonia.’