Serena Williams’ green Nike bodysuit earned mixed reviews from tennis fans when she first wore it at the Australian Open on Tuesday, but the influential athlete wore it again for her matches on Thursday.

And just like a couple days earlier, the custom Lycra look appeared to be good luck, as it outfitted her for yet another victory.

The 37-year-old won 6-2, 6-2 against Canada’s Eugenie Bouchard while her husband, Reddit co-founder Alexis Ohanian, supported her in the crow.

It’s back! Serena Williams played in her green Nike bodysuit again on Thursday 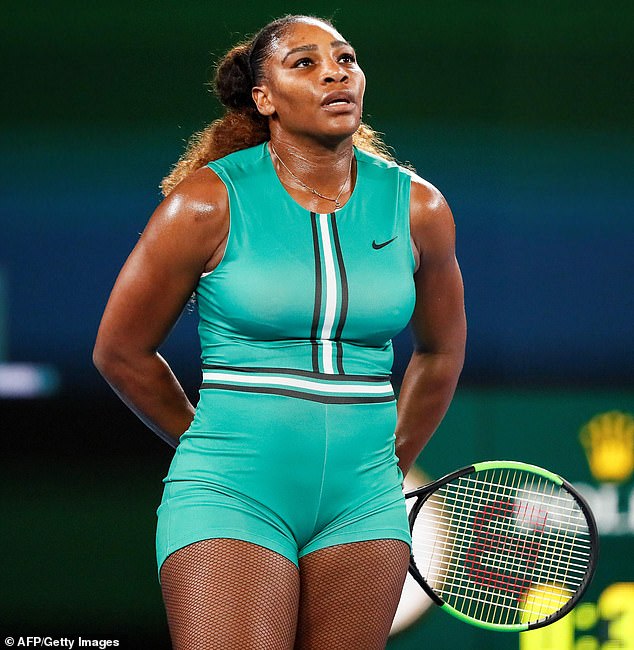 Gettin’ ’em talking! The 37-year-old wore it for the second time at the Australian Open after it sparked a huge reaction online the first time 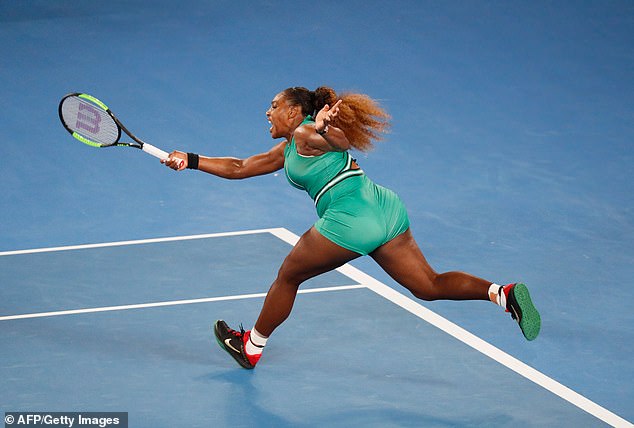 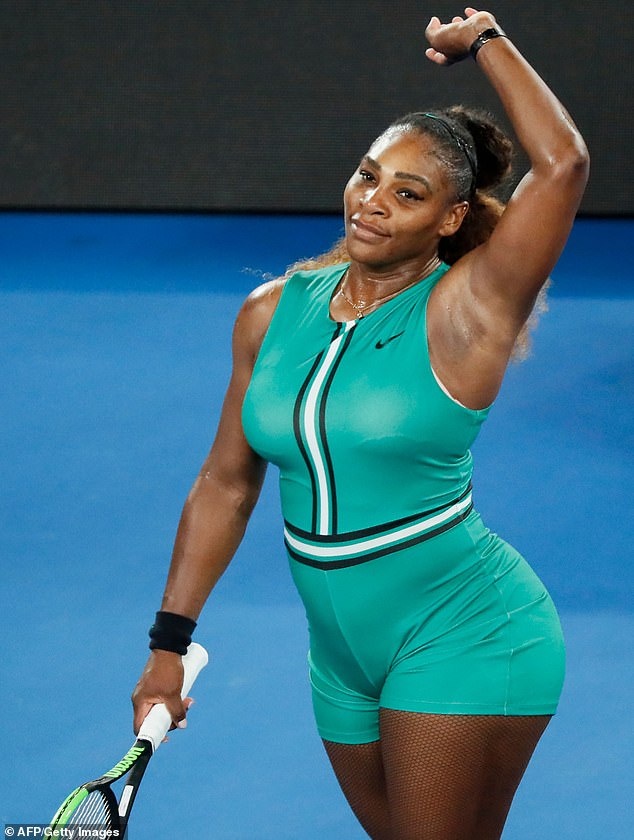 She’s so buzzy! The figure-hugging one-piece certainly made a style statement 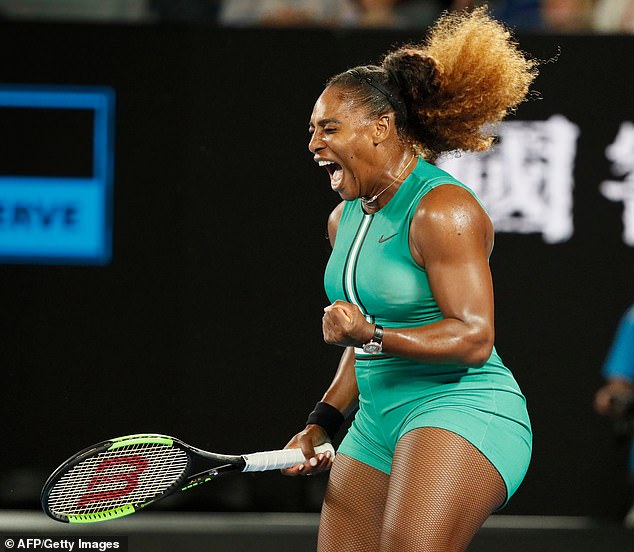 Woohoo! Serena celebrates during her winning match on Thursday 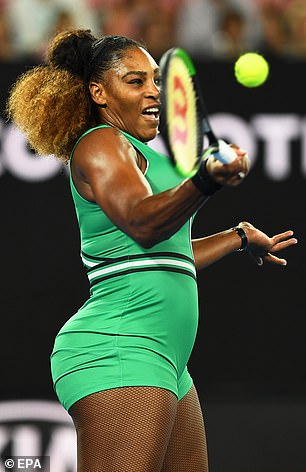 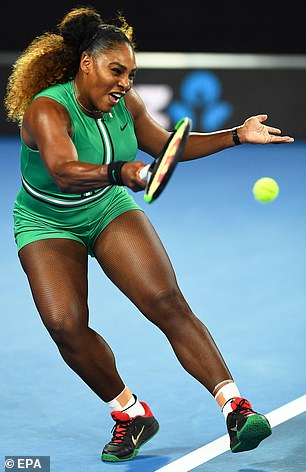 Accessorized: The star pair the one-piece with fishnets and colorful sneakers 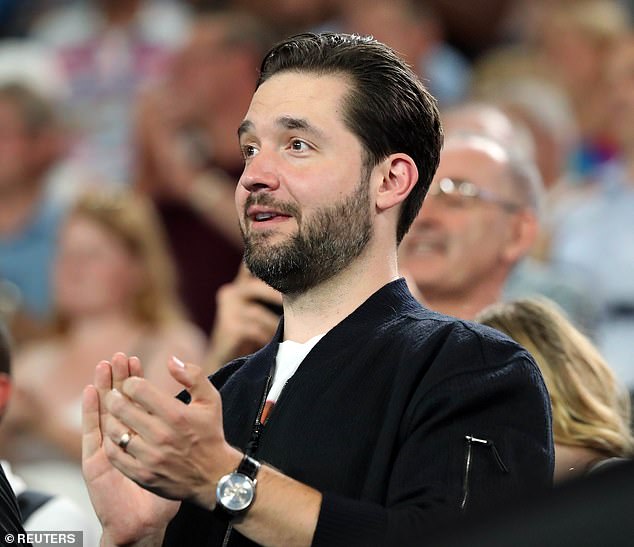 Right-hand man: Her husband, Reddit co-founder Alexis Ohanian, was seen watching her in the crowd at Melbourne Park

It makes sense that Serena would want to get the most wear out of the leotard after collaborating with Nike on designing it.

According to Metro, the star jokingly called the look a ‘Serena-tard’ and noted that it made a bold statement on purpose.

‘We design really far in advance at Nike,’ she said. ‘I knew that I have been working really, really hard in the offseason to be incredibly fit and incredibly ready.

‘I took a year off, and, you know, just get back with still trying to get 12 months under my belt of playing, actually. I wanted to be fit. I came back.

‘Nike always wants to make an incredibly strong, powerful statement for moms that are trying to get back and get fit. That was basically it for me.’

The Serena-tard, as she dubbed it, was made in a pretty green hue with sporty black-and-white piping down the front and around the waist. It also featured a cutout design at the lower back. 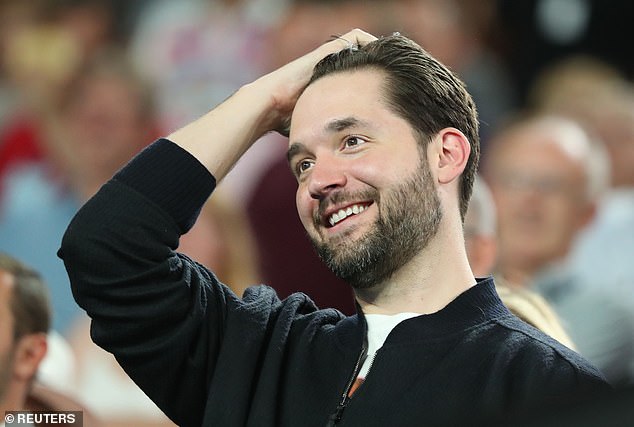 Happy as can be: Alexis looked thrilled with his wife’s performance, and happily cheered her on throughout the match 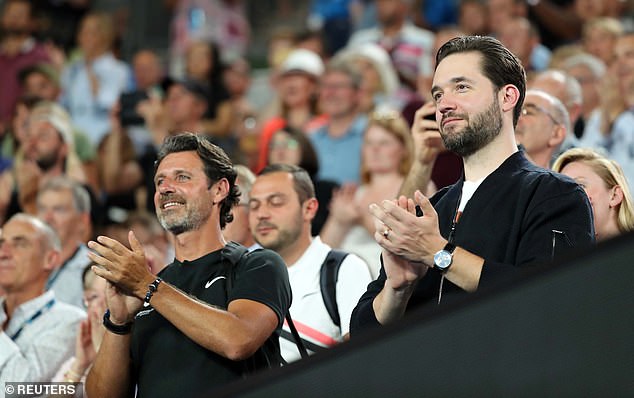 Woohoo! Alexis cheered on his wife from his prime seats at the event 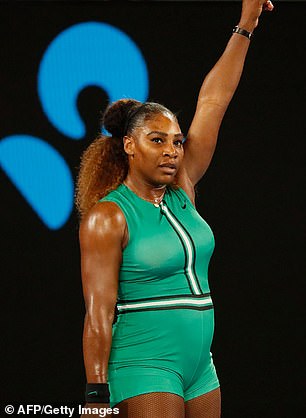 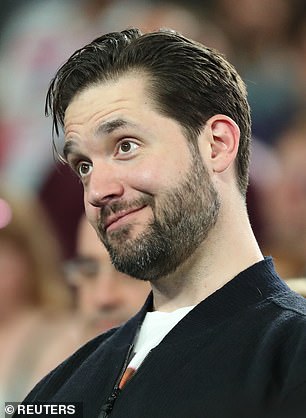 Goals: Alexis, who didn’t know anything about Serena before they got together, has been there to cheer her on at all her big matches 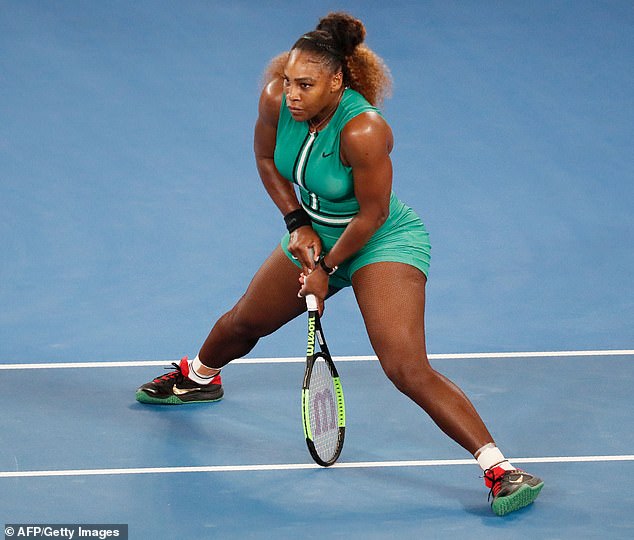 Hands-on! Serena called her Nike outfit a ‘Serena-tard’ and said she helped design it 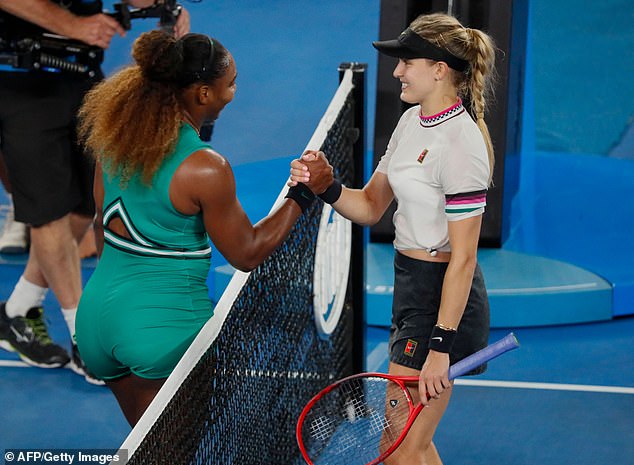 Good game! Serena is pictured shaking hands with Eugenie Bouchard after her victory

She paired it with fishnet tights, perhaps taking a cue from her friend Beyonce, who often wears them on stage to create s slimming, skin-smoothing effect.

Serena finished the whole thing off with a pair of black shoes with red accents.

After Serena wore the outfit for her 6-0, 6-2 victory over Germany’s Tatjana Maria on Tuesday, she donned it yet again on Thursday to best Bouchard.

If she manages to pull off a win at the Australian Open, that’ll make 24 Grand Slam titles for the star — and she’ll tie the record set by Austarlia’s Margaret Court

Until then, the star’s simply wowing tennis fans with her skills on the court — and getting the thumbs up from many fashion fans for her on-court style.

When she first stepped out in the Serena-tard on Tuesday, her look sparked something of a firestorm on Twitter, with many people praising her for her fashion-forward look.

Others, however, criticized her for flouting traditions that still influence what is considered appropriate on-court attire. 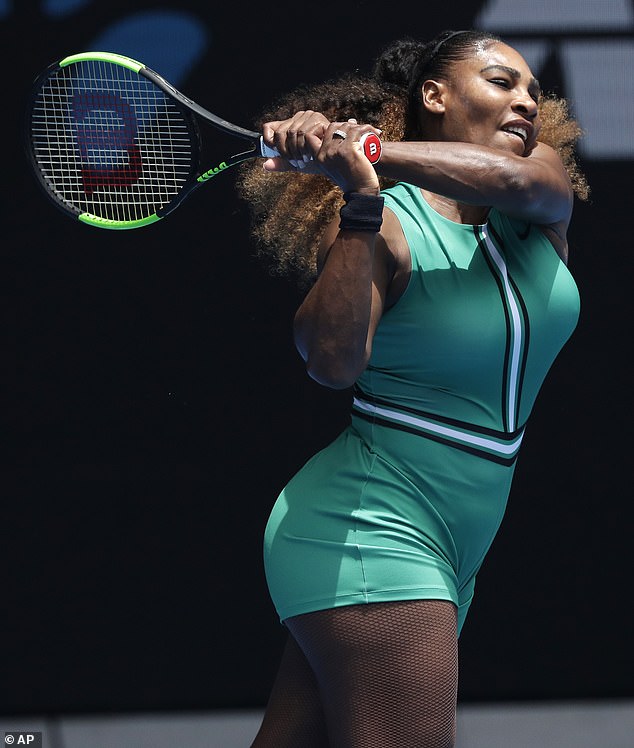 Eye-catching fashion: The star got mixed reactions when she first wore the one-piece on Tuesday, when she beat Germany’s Tatjana Maria 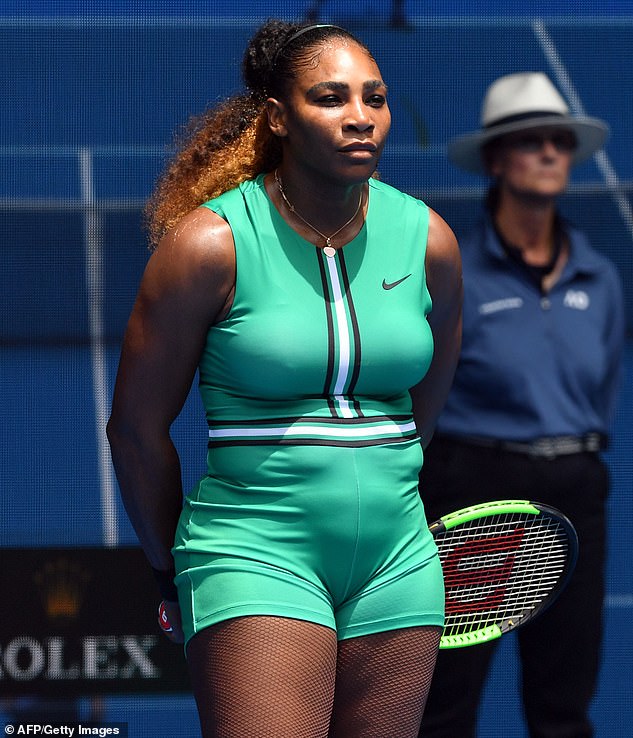 Design: The jumpsuit features black and white panels across the bust and waist 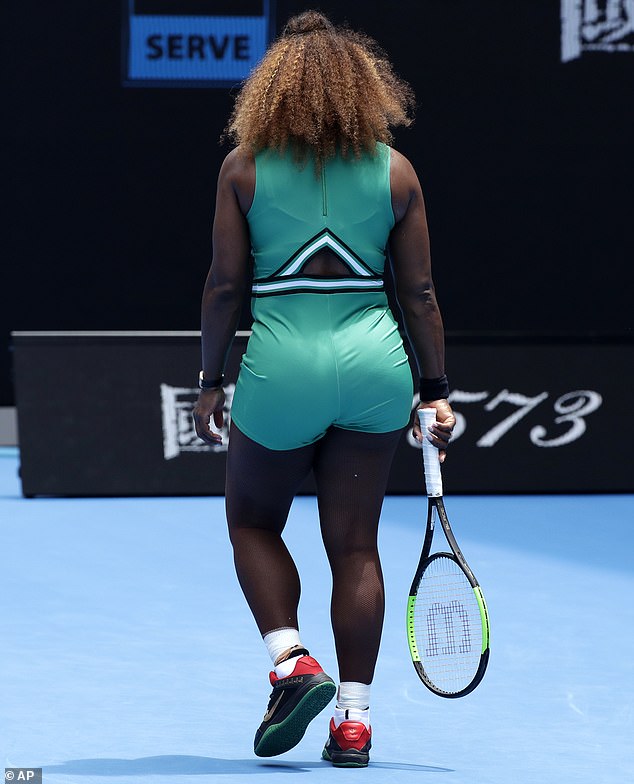 Peek-a-boo: The bodysuit has a triangular cut-out at the back, that no doubt serves as an excellent form of ventilation, while also providing an extra bit of fashionable flair to the outfit

Within mere minutes of Serena stepping out on the court, Twitter users were sharing messages of support and praise for the 23-time Grand Slam winner, celebrating her for choosing to model such a unique and stylish look.

Another followed with: ‘I’m living for Serena Williams outfit that she is wearing for the Aus Open today. So fab.’

‘That outfit is bangin!!! And perfect for the weather!!’ one also said, referencing the soaring temperatures in Australia at the time of play.

Even Serena’s husband, Reddit co-founder Alexis Ohanian, couldn’t resist praising his wife’s look on Twitter, writing: ‘I’m here for the romper,’ while adding the emoji of a pair of eyes for extra effect.

However, while the look struck a positive note with hundreds of people online, it also prompted some criticism from some who deemed it ‘distasteful’ and inappropriate.

‘Serena, you can’t wear this on a tennis court!’ one person insisted, while another chimed in: ‘Serena has all the money in the world and can NEVER wear suitable tennis clothing. Another FAIL outfit!

‘Add that to her unsportsmanlike behaviour at US Open gives me reason to not watch her matches. There is always another match on other channel!’

Popular: Many Australian Open viewers took to Twitter to praise Serena for her bold choice of attire, with one person describing the vibrant look as ‘bangin’

Backlash: There were some who felt that Serena’s skintight look was unsuited to such a prestigious sporting event – and they were more than happy to share their distaste online

Lookalike: A few people joked about Serena’s look, with one person comparing her to the green Power Ranger, while others made rather lewd suggestions about her

‘She talks about #sexism and is wearing an outfit you only see in bars with red lights… disgusting,’ another piped up.

A few people even urged all of the sport’s governing bodies to follow in the footsteps of the French Open and implement stricter rules regarding what can and can’t be worn on the court.

‘I don’t understand the appreciation over Serena Williams’ outfit,’ one such person commented. ‘Truly undeserved. The governing body needs to set clear rules over attire.’

Other people cruelly took the chance to share negative comments about Serena’s body, with one writing: ‘OMG, just tuned in to your 1st round match and saw your outfit. Do [you] own a mirror? Lose some weight, try a few salads or [Weight Watchers].’

A few people expressed their thoughts about Serena’s look in more suggestive posts, with one particularly enthusiastic viewer saying: ‘Serena Williams in this green jumpsuit is redirecting the blood flow from my brain to other parts of my anatomy.’

Another man commented on an Instagram picture of the tennis pro in the outfit, writing: ‘I saw you in this outfit this afternoon. I couldn’t say anything on account my wife called me to check it out. It’s hot!!’

Some people poked fun at the tennis star’s appearance, with one person joking that she looked like a character from hit TV show the Power Rangers. 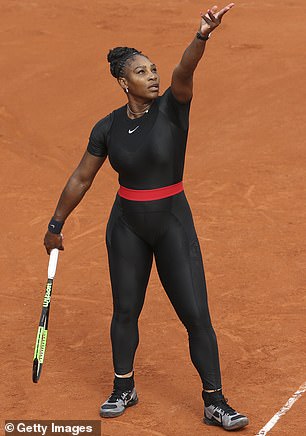 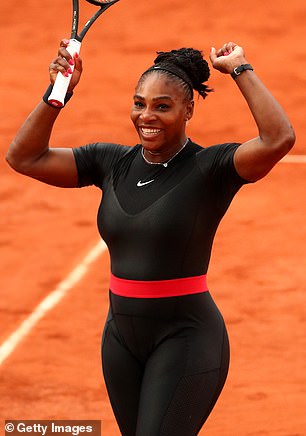 Controversy: Serena made headlines in August last year, when the French Open banned her from wearing her black catsuit at this year’s tournament 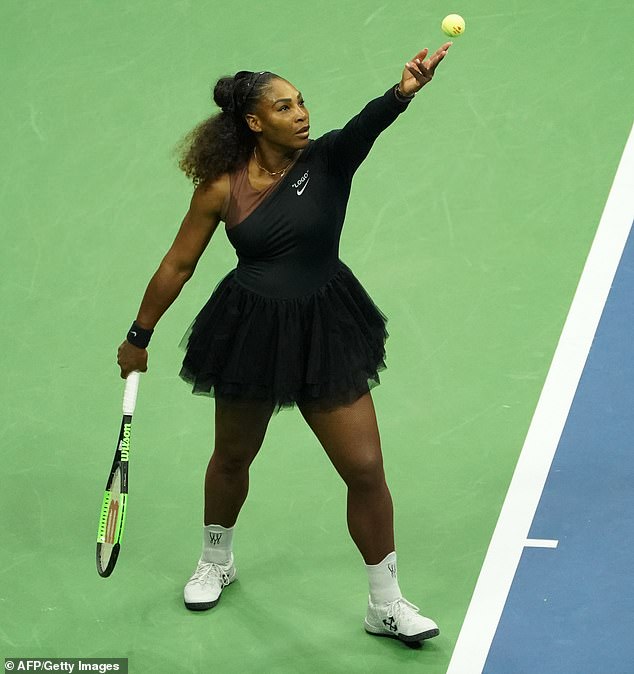 Style win: Serena received high praise for the one-shouldered tutu dress she wore at the US Open. The style was designed especially for her by Nike and Off-White

This is, of course, not the first time that Serena has made such a bold impression with her on-court fashions. The sporting superstar made headlines in August last year, when the French Open banned her from wearing her black catsuit at this year’s tournament.

President Bernard Giudicelli said in the 500th issue of Tennis Magazine that stricter rules will be in place as ‘sometimes we go too far.’

Referring to Serena’s black catsuit, which she wore to the tournament last year, Giudicelli said: ‘It will no longer be accepted. One must respect the game and the place.’

Speaking out to defend her choice, Serena said the skin-tight outfit helps with preventing blood-clots, a condition she has covered in depth in her HBO series, Being Serena.

Her sponsor Nike also spoke out, sharing a photo to social media of Williams in the outfit, along with the caption: ‘You can take the superhero out of her costume, but you can’t take away her superpowers.’

At the US Open in 2018, Serena wowed fashion fans the world over when she took to the court one-shouldered tutu dresses that had been designed especially for her by trendy streetwear brand Off-White in collaboration with Nike.