Serena Williams is retiring from tennis, although not immediately.

‘It’s the hardest thing that I could ever imagine,’ the legendary tennis has announced in the latest issue of Vogue. ‘I don’t want it to be over, but at the same time I’m ready for what’s next’

Williams’s retirement is not immediate. As she revealed in her piece, she is still hopeful she can play at the US Open in New York later this month.

‘Unfortunately I wasn’t ready to win Wimbledon this year,’ Williams wrote. ‘And I don’t know if I will be ready to win New York. But I’m going to try. And the lead-up tournaments will be fun.

‘But I’m not looking for some ceremonial, final on-court moment,’ she continued. ‘I’m terrible at goodbyes, the world’s worst. But please know that I am more grateful for you than I can ever express in words. You have carried me to so many wins and so many trophies. I’m going to miss that version of me, that girl who played tennis. And I’m going to miss you.’

Williams not only wants to spend more time with her husband, Alexis, and their five-year-old, Olympia, but the 23-time Grand Slam singles winner revealed that the couple is trying to have another child in the near future.

‘In the last year, Alexis and I have been trying to have another child, and we recently got some information from my doctor that put my mind at ease and made me feel that whenever we’re ready, we can add to our family,’ Williams wrote. ‘I definitely don’t want to be pregnant again as an athlete. I need to be two feet into tennis or two feet out.’

The 40-year-old Williams has not won a Grand Slam since the 2017 Australian Open, and has been chasing her 24th major singles championship  to draw her even with Margaret Court on the all-time leaderboard.

Williams doesn’t deny that the record is meaningful, but she took the time to put it in perspective for Vogue.

‘There are people who say I’m not the GOAT because I didn’t pass Margaret Court’s record of 24 grand slam titles, which she achieved before the ”open era” that began in 1968,’ she wrote. ‘I’d be lying if I said I didn’t want that record. Obviously I do. But day to day, I’m really not thinking about her. If I’m in a grand slam final, then yes, I am thinking about that record. Maybe I thought about it too much, and that didn’t help.

‘The way I see it, I should have had 30-plus grand slams,’ she continued. ‘I had my chances after coming back from giving birth. I went from a C-section to a second pulmonary embolism to a grand slam final. I played while breastfeeding. I played through postpartum depression. But I didn’t get there. Shoulda, woulda, coulda. I didn’t show up the way I should have or could have. But I showed up 23 times, and that’s fine. Actually it’s extraordinary. But these days, if I have to choose between building my tennis résumé and building my family, I choose the latter.’ 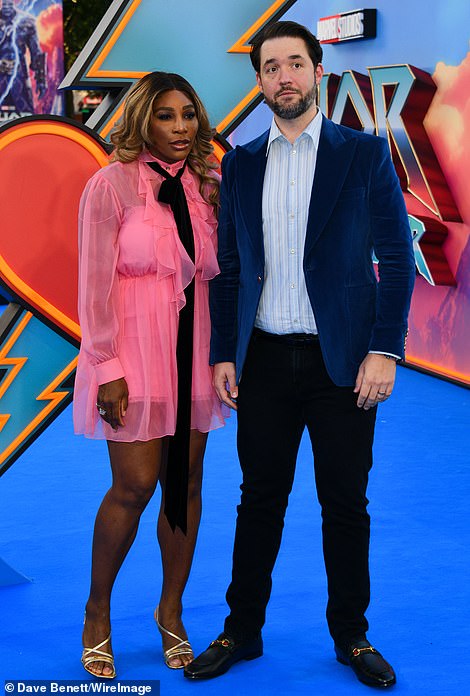 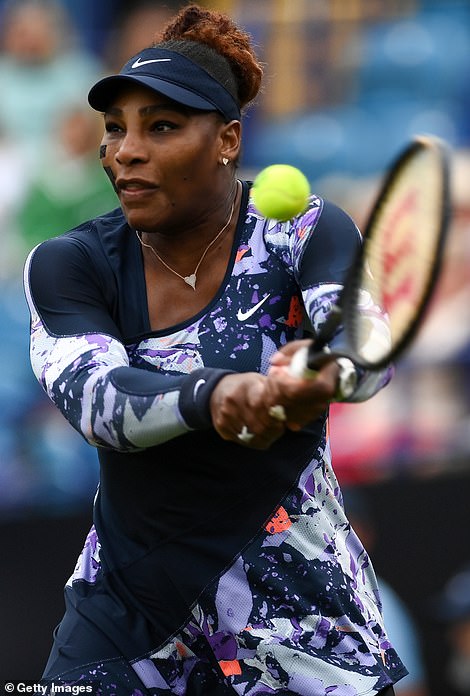 Serena Williams pictured alongside her husband, Alexis Ohanian (near left) and playing in a doubles event earlier this year 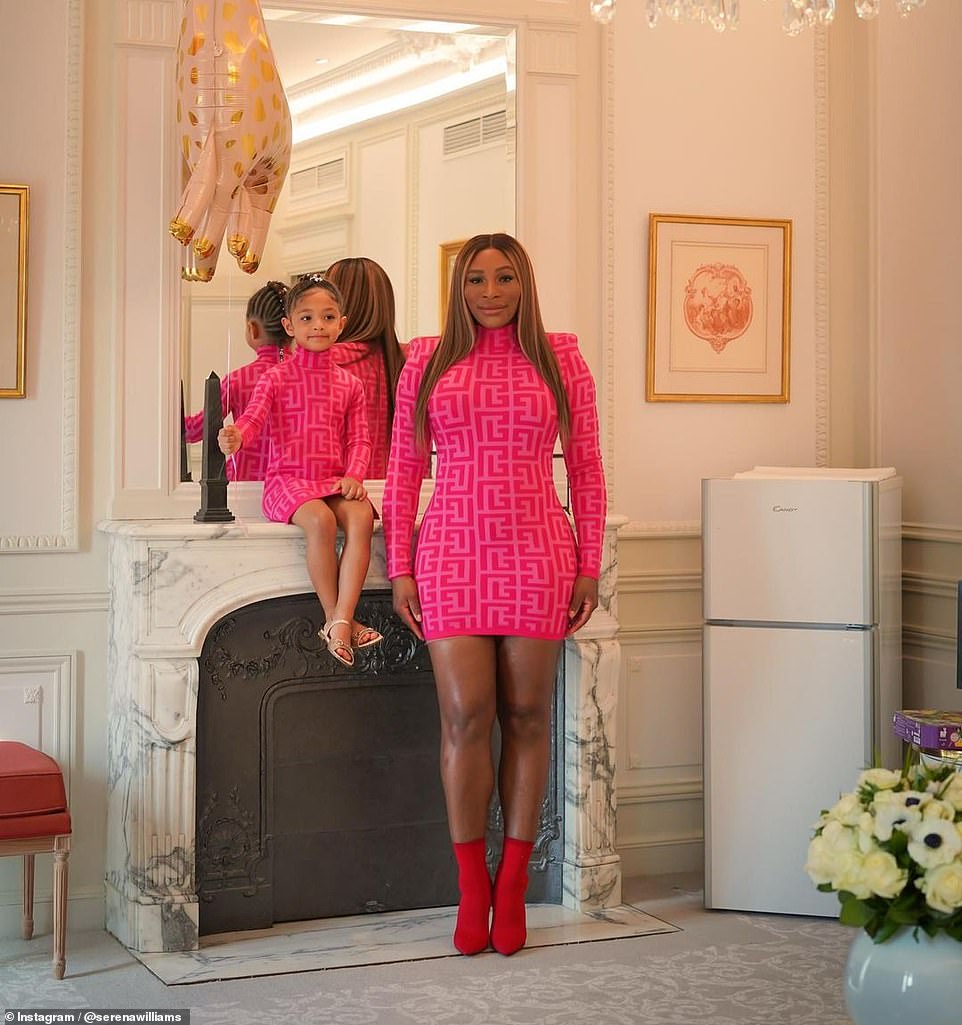 Serena said she wants to spend more time with her five-year-old daughter Olympia (left), and possibly have another child 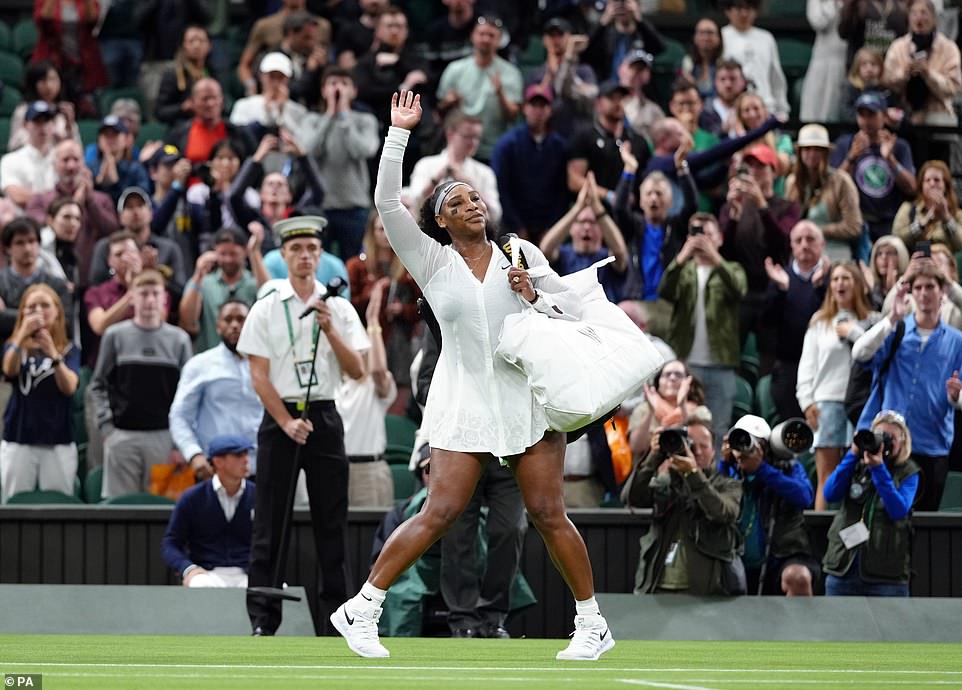 Serena Williams, who has hinted that her retirement could be near, made it all official Tuesday

The announcement comes, strangely enough, after her first win in 430 days.

‘I’m just happy to get a win,’ Williams said Monday after beating Nuria Parrizas-Diaz 6-3, 6-4 at the women’s National Bank Open in Toronto. ‘It’s been a very long time, I forgot what that felt like.’

It’s just the second tournament of the season for the 40-year-old Williams, who returned to competition at Wimbledon just over a month ago. The 23-time Grand Slam champion fell in the first round to Harmony Tan in three sets at the All England Club.

Before then, she last competed at the 2021 Wimbledon tournament, where she retired in the middle of her first match due to a torn hamstring suffered after slipping on the grass surface.

Williams, who will turn 41 at the end of September, will next face either 12th-ranked Belinda Bencic or Tereza Martincova.

Williams has won this tournament three times and reached the final in her last appearance at the hardcourt event in 2019, losing to Bianca Andreescu when she was forced to stop because of injury.

But Williams has played little since and knows she needs time on the court.

‘I feel good, I felt like I competed well today. I think that’s what I needed to do, is just compete,’ she said. ‘Mentally, I’m getting there. I’m not where I normally am (or) where I want to be. Any match I play, whether I win or lose, helps me.

‘I haven’t played a lot in the last year, (even) two years. I think that helps me physically. I feel much better in practice, it’s just getting that to the court. Literally, I’m the kind of person (where) it takes one or two things and then it clicks.’

Parrizas-Diaz tied it 2-2, but despite Williams’ struggles at certain points, the 31-year-old Spaniard couldn’t find enough of a consistent flow to get ahead. Williams found her rhythm, mixing solid touch with her signature power and putting shot after shot out of Parrizas-Diaz’s reach.

Williams’ effort had the fans on their feet roaring and some even bowing.

Williams won the final three games to take the first set, then surged ahead in the second after the 57th-ranked Parrizas-Diaz took a 4-3 lead. She endured a nine-deuce game to hold serve and even the set, then broke in the next game before serving out the victory.

While Williams says the end of her remarkable career is in sight, she’s enjoying her time and staying in the moment.

‘I’m getting closer to the light. Lately, that’s been it, I can’t wait to get to that light,’ she said, adding the light represents ‘freedom.’

‘I love playing though, it’s amazing,’ she added. ‘I can’t do this forever, so sometimes you just want to try your best to enjoy the moments and do the best that you can.’