Surprise up and coming tennis-pro Tennys Sandgren’s Australian Open wins have been overshadowed by his ‘alt-right’ tweets, and, has he caught the ire of tennis great Serena Williams.

Sandgren, an ardent Trump supporter from Tennessee, ‘cleaned’ his Twitter account on Tuesday as it became more about his apparent alt-right political beliefs than his game as he dove into this year’s Australian Open, which saw him ranked No. 97, but on Monday he upset world No. 5 Dominic Thiem in five sets.

However, one tweet in particular caught the attention of Serena before he wiped his Twitter, that was shared during one of her matches in 2015.

The up and coming tennis pro shared a video of Serena yelling at Roberta Vinci at the 2015 US Open with the word ‘disgusting.’

As he started his Melbourne match, Serena tweeted a subtle dig with ‘Turns channel,’ on Tuesday. 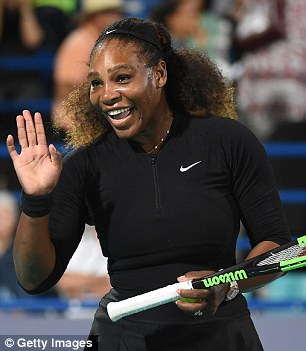 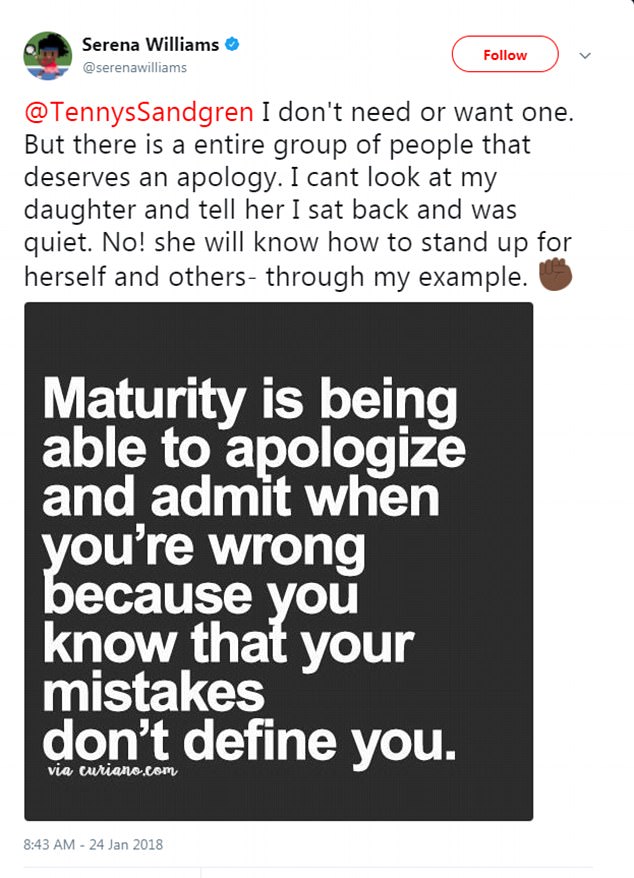 Sandgren told ESPN his decision to wipe his Twitter, was for a ‘clean start.’

He explained in the interview that he deleted all of his tweets not because it’s ‘something that I’m really necessary embarrassed about,’ but because he thought that ‘creating a version of a cleaner start is not a bad call.’

And, he added in an interview Tuesday, speaking on his now deleted content: ‘[It’s] not really specific ‘alt-right’ content that I deem of value. I think that’s very incorrect, and I don’t find information like that to be of value or to hold on to any of those things.’

On Wednesday Serena tweeted again, this time directly at Sandgren writing: ‘I don’t need or want one. But there is a entire group of people that deserves an apology. I cant look at my daughter and tell her I sat back and was quiet. No! she will know how to stand up for herself and others- through my example.’

Sandgren had also tweeted about believing in the Pizzagate conspiracy theory.  He tweeted, according to Deadspin ‘sickening and the collective evidence is too much to ignore,’ and that he believes the mainstream media isn’t covering Hillary’s involvement in Satanic rituals because ‘they are concocting a way to make it sound not so bad.’

Some of his recent tweets included re-tweets of white nationalist Nicholas Fuentes, who in turn called Sandgren a friend on Twitter.

After his Wednesday loss, Sandgren started his post-match press conference reading a statement from his cellphone, lashing out at the media for taking away from the game, and instead discussing his perceived alt-right leanings during his unexpected run at Melbourne Park:

‘You seek to put people in these little boxes so that you can order the world in your already assumed preconceived ideas. You strip away any individuality for the sake of demonizing by way of the collective. 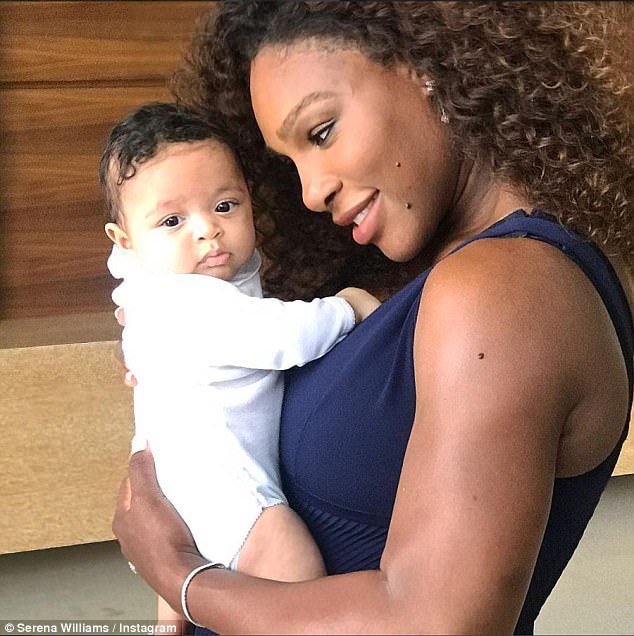 Serena holding her baby Alexis Olympia Ohanian Jr. She was pregnant with Alexis during the Australian Open. Tweeting directly at Sandgren that she had to address him calling her ‘disgusting’ in part for her daughter

‘With a handful of follows and some likes on Twitter, my fate has been sealed in your minds. To write an edgy story, to create sensationalist coverage, there are a few lengths you wouldn’t go to to mark me as the man you desperately want me to be.

‘You would rather perpetuate propaganda machines instead of researching information from a host of angles and perspectives while being willing to learn, change, and grow. You dehumanize with pen and paper and turn neighbor against neighbor. In so doing, you may actually find you’re hastening the hell you wish to avoid, the hell we all wish to avoid.

‘It is my firm belief that the highest value must be placed on the virtue of each individual, regardless of gender, race, religion, or sexual orientation. It’s my job to continue on this journey with the goal of becoming the best me I can and to embody the love Christ has for me, for I answer to Him and Him alone. I’ll take questions about the match, if you guys don’t mind. Thank you. If you have any questions about the match.’