Serena Williams left her upmarket Manhattan hotel on Saturday afternoon as she competes in US Open finals which could be historic and will be attended by her close friend Meghan Markle.

She is due to be watched by the Duchess of Sussex who arrived an hour late into New York on a ‘last-minute’ commercial flight to catch the clash on Saturday against Canadian Bianca Andreescu.

Should she win, it’ll be her first grand slam title since the Australian Open in 2017 – after which she took a year out of the game to have her daughter with Reddit co-founder husband Alexis Ohanian. 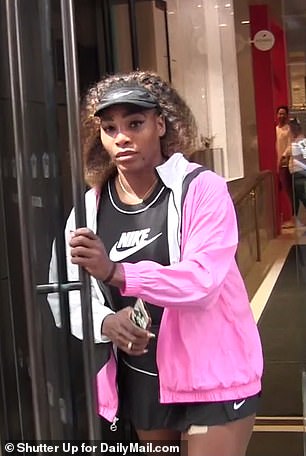 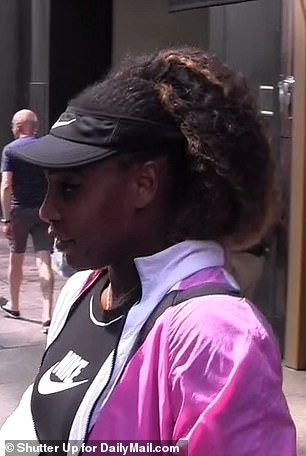 Williams beat Ukranian Elina Svitolina in the semi-finals on Thursday and is vying to win her 24th career Grand Slam title, which would tie her with Margaret Court for the most in tennis history 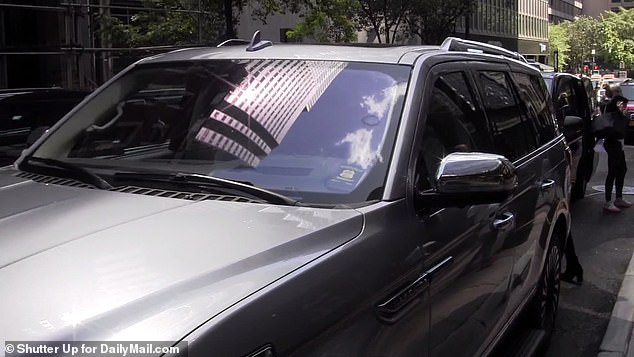 The game against teen phenomenon Andreescu is set to begin at 4pm at the Arthur Ashe Stadium, the largest tennis stadium in the world Queen’s Flushing Meadows neighborhood.

Fellow mother Meghan will be cheering her on in a show of solidarity, as Williams battles back to form following a series of defeats following her pregnancy – recently losing out in the final of Wimbledon in London.

Williams beat Ukranian Elina Svitolina in the semi-finals on Thursday and is vying to win her 24th career Grand Slam title, which would tie her with Margaret Court for the most in tennis history.

Andreescu had never advanced past the second round of a Grand Slam prior to the 2019 U.S. Open. The 19-year-old Canadian defeated Belinda Bencic in straight sets in the semifinals on Thursday.

The 37-year-old Williams has lost all three major finals she has reached since returning from giving birth, including to Naomi Osaka in Flushing Meadows last year.

That match is best remembered for Williams’ arguments with chair umpire Carlos Ramos.

On Friday her coach, Patrick Mouratoglou, also believes her familiarity with the big stage could give her an edge.

The Duchess of Sussex who arrived an hour late into New York on a ‘last-minute’ commercial flight to catch the clash on Saturday against Canadian Bianca Andreescu. Markle is pictured here watching Williams compete at Wimbledon in 2018 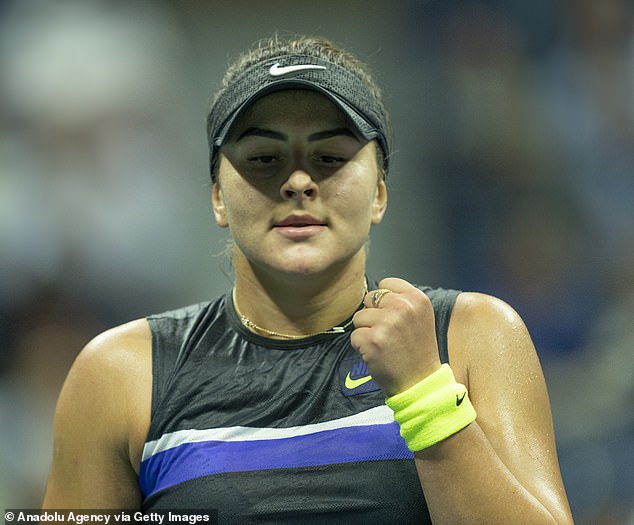 Williams is due to play Bianca Andreescu in today’s final. The 19-year-old Canadian defeated Belinda Bencic in straight sets in the semifinals on Thursday

‘It’s called pressure, and I think Serena had to experience a bit of pressure in her life,’ he said of the 37-year-old, who learned tennis as a child from her father on courts in crime-ridden Compton, California.

‘And you can’t think that she’s not good at dealing with pressure.’

Williams appears fully recovered from the knee injury that forced her to pull out of the Miami and Rome tournaments earlier this year after just one match, giving her already lethal game an added dimension.

‘If you feel weak or not as strong as you wish you were, it’s more difficult to beat the pressure,’ Mouratoglou said.

‘I think it’s a totally different situation now, because now she can move. 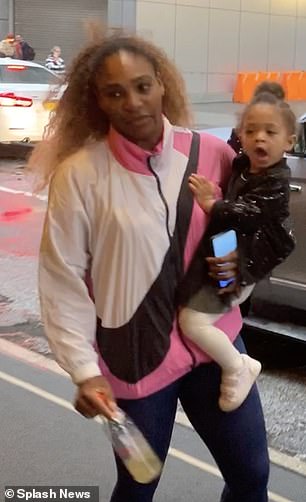 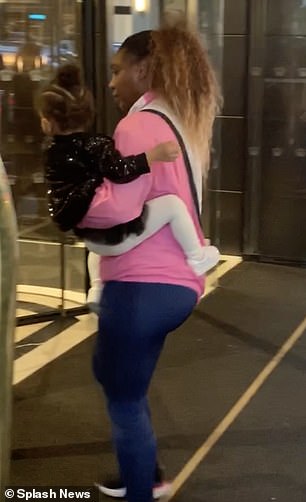 Williams was seen carrying two-year-old daughter Alexis on her side as she entered the Lotte New York Palace hotel on Friday night. She was reported to be ‘nervous’ ahead of the big match that could see her equal the grand slam record 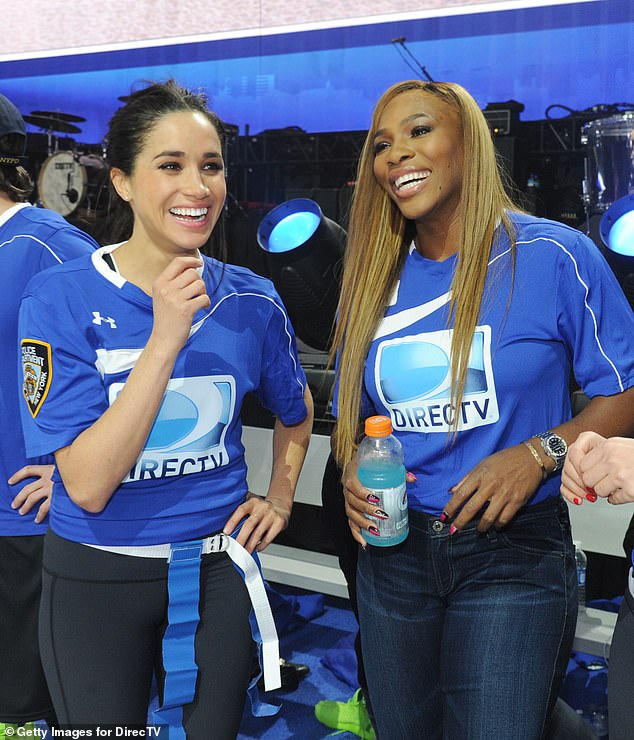 ‘So there is no panic if she misses a bit more than usual. No problem. There are other options of play.’

Meanwhile on Friday morning, Markle flew from London Heathrow, leaving Prince Harry and their four-month-old son Archie in Windsor – although a security team is said to be with her.

She is thought to have either boarded the 8.25am flight or the 9am flight from Heathrow.

The 8.25am flight left more than 30 minutes behind schedule. It had been set to arrive in New York for 11.05am local time, but instead arrived at 12.22pm.

The Duchess was seen heading into Modo Yoga with a friend in the trendy West Village neighborhood of Manhattan on Friday.

Meghan, 38, joined a surprisingly full class of up to 60 people at the eco-conscious studio, which specializes in hot yoga classes.

‘There were lots of sweet, knowing smiles’ among those in the room, a source told People.com, with everyone respecting the duchess’s privacy. 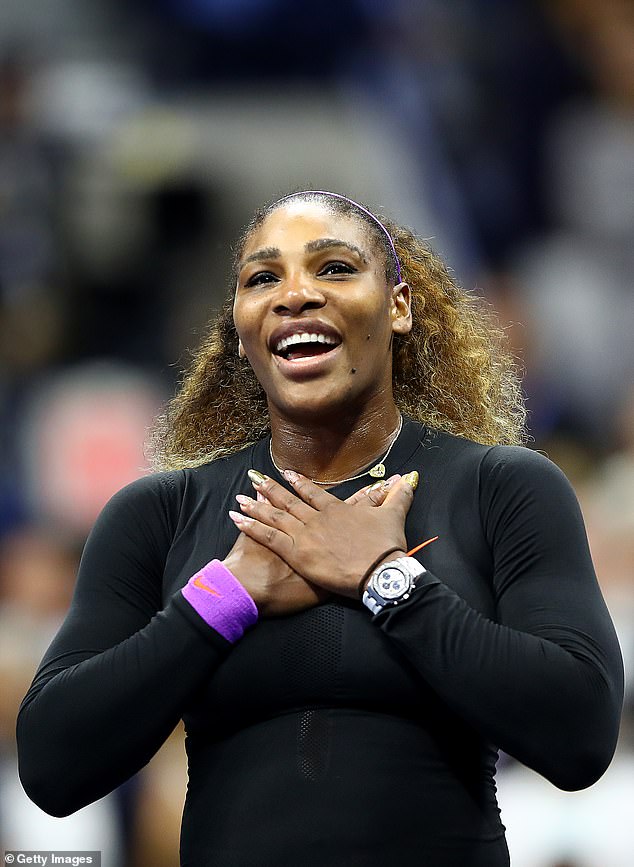 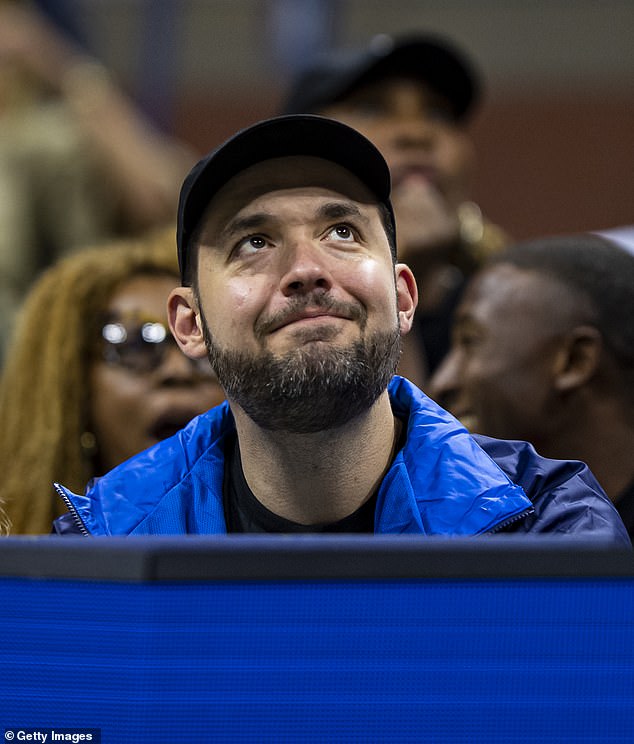 Incredibly, despite an astounding number of people being in the same small studio as one of the world’s most famous women, a photo is yet to emerge of Meghan’s session.

Meghan stayed up to watch the semi-final, which ended at 1.30am yesterday UK time, and is thought to have boarded a flight in London at about 8.30am.

The Duchess’ trip also comes as aides insisted Meghan and Harry were too busy working on charitable projects to join the Queen at Balmoral this weekend.

Despite the long flight and a stressful delay for Meghan, sources have claimed that Williams’ coaches aren’t massively thrilled that the Duchess has come to support her friend, as she could distract her from the game in hand.

They are said to be concerned due to the fact that Williams lost when Meghan attended her last match at Wimbledon.

A source told Page Six: ‘Serena asked her coach about Meghan coming when she won last night and everyone is worried, as tennis players are very superstitious, and Serena lost when Meghan came to watch her at Wimbledon.’

The source added that Williams’ aides were concerned that the trip was a publicity stunt. 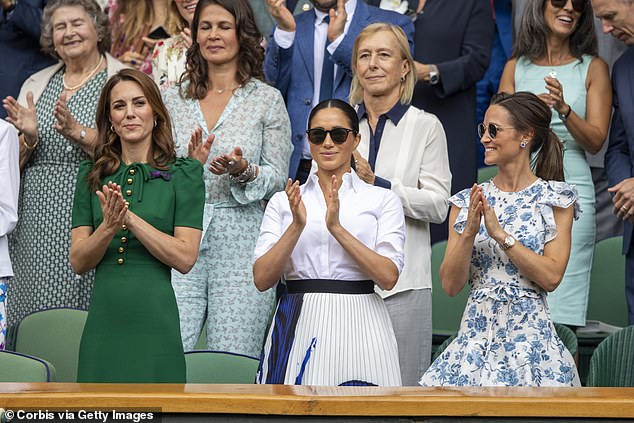 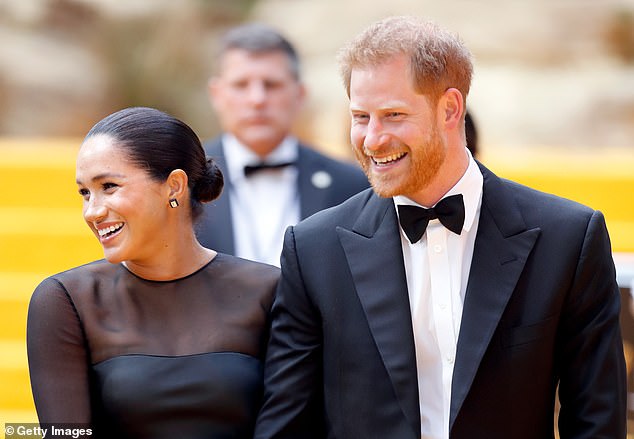 However, Williams is said to ‘adore’ Meghan and ‘wouldn’t have a word of it’.

It is not yet known where in New York Meghan will be staying and who she will be staying with, however she is thought to have flown first class for the two-day trip across the Atlantic.

The Duchess, who also watched Williams at Wimbledon in July, flew out following the row over she and her husband Prince Harry taking four trips by private jet in 11 days last month.

Meghan is expected to return to Britain on Sunday. A source told The Times: ‘It is a last-minute trip. Excited to support her friend, and then come back.’

She is said to have been thinking about travelling across the Atlantic to attend the final at Arthur Ashe Stadium since Williams won her quarter-final on Wednesday.

This is Meghan’s first trip to New York since her baby shower, which Williams helped organize in February, when she partied for five nights at a $70,000-a-night penthouse with her celebrity friends.

The party, which caused disquiet in Britain due to its eye-watering estimated total bill of $405,000, was hosted by Williams and her long-standing friend Jessica Mulroney. 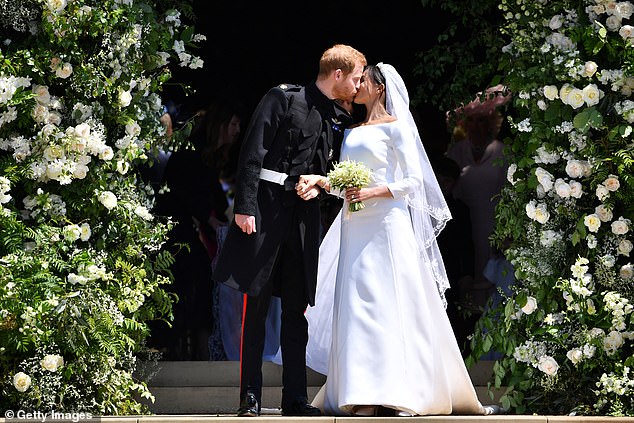 After becoming Prince Harry’s girlfriend and then a Duchess, Meghan is said to have leaned on Williams for mentoring on how to handle the media in the run-up to their marriage 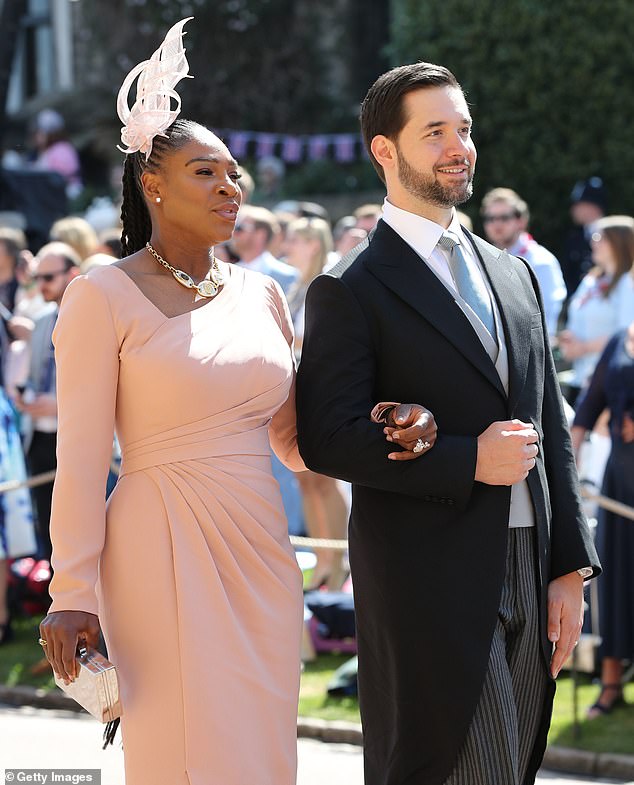 Williams, who attended their wedding with her husband  in May 2018, said last year they had ‘known each other for a long time, but we really are relying on each other a lot recently’

Meghan flew to and from the US on that occasion on a private jet with her close friend Amal Clooney, who paid for the 13-hour round trip which cost $16,000 an hour.

Meghan first met Williams at a Super Bowl party in 2010, and their friendship is thought to have quickly evolved through frequent phone calls and texts.

After becoming Prince Harry’s girlfriend and then a Duchess, Meghan is said to have leaned on Williams for mentoring on how to handle the media.

Williams, who attended their wedding in May 2018, said last year they had ‘known each other for a long time, but we really are relying on each other a lot recently’.

The couple, who live at Frogmore Cottage in Windsor, enjoyed a week-long trip to Ibiza and a long weekend in the south of France with Sir Elton John last month.

The Sussexes have been under fire for taking private flights after previously claiming they will have a maximum of two children to avoid damaging the environment.

Their son Archie, who was born at Portland Hospital in London on May 6 and is seventh in line to the throne, who is just four months old.

Buckingham Palace also formally confirmed that the Sussexes would take baby Archie with them to Africa as their first official tour as a family.

There had been rumors that the Sussexes would be joining the monarch at Balmoral in the Scottish Highlands this week with their baby son Archie.

But while most of the Royal Family have made the long trek up to Aberdeenshire, Harry and Meghan actually have no plans to fly to Scotland at all.

Sources close to the couple insist that the decision should not be seen as a ‘snub’ – and Harry only rarely goes up to the Queen’s Deeside estate nowadays.

They flew to Ibiza by private jet on August 6 for Meghan’s 38th birthday. Days later, they flew to Nice on a $18million Cessna plane described as the ‘pinnacle of luxury’.

Sir Elton said he paid for their flights to his holiday home and made an ‘appropriate contribution’ to a carbon footprint fund to offset the environmental impact.

Earlier this week, Harry defended his use of private jets, claiming he needed them for his family’s safety – despite urging the public to cut their carbon footprint.

He took a scheduled flight to Amsterdam this week to promote Travalyst, a scheme for environmentally-friendly tourism.

Speaking at the event, the prince refused to apologise for his recent private flights, saying: ‘I spend 99 percent of my life travelling the world by commercial.

‘Occasionally there needs to be an opportunity [to fly privately] based on a unique circumstance to ensure that my family are safe – it’s as simple as that.

‘For me it’s about balance. It’s not a decision I would want to take, but if I have to do that, I will ensure that I balance out the impact that I have.’

Harry dismissed concerns over his carbon footprint by insisting that he ‘offsets’ his emissions by donating to renewable energy incentives and planting trees.