Serena Williams has issued a rallying cry to improve healthcare for pregnant women and new mothers around the world after her traumatic labor in September.

The tennis star, 36, was forced to have an emergency c-section to deliver her daughter Alexis Olympia after her heart rate started to plummet.

The day after the birth, Williams was experiencing a shortness of breath and scans revealed she had several blood clots in her lungs.

She was given a drip with anti-coagulant drugs, but constant coughing from her pulmonary embolism opened up the scar from the c-section and her abdomen filled with her now-thinned blood.

Doctors saved her life by inserting a filter into a major vein to prevent any more clots from entering her lungs, and she was put on bed rest for the next six weeks.

Williams’ experience was not unique: 25 per 100,000 women die in childbirth in the US every year – more than double the rate in western Europe. Black American women have triple the risk of their white peers. In poorer countries, the rate is even higher.

But unlike most, Williams acknowledges in an op-ed for CNN today, she had world-class medics and top equipment.

‘If it weren’t for their professional care, I wouldn’t be here today,’ she said, adding: ‘Every mother, everywhere, regardless of race or background deserves to have a healthy pregnancy and birth. And you can help make this a reality.’

Fighting for a cause: Serena Williams, 36, was forced to have a c-section to deliver Alexis Olympia (pictured), then almost died due to complications the next day

The day after the birth, Williams was experiencing a shortness of breath and told the staff that she was concerned that she had developed blood clots.

Williams, who had to stop taking her anticoagulant medications leading up the delivery, was right, and had indeed developed several clots in her lungs.

She was given a drip, but constant coughing from her pulmonary embolism opened up the scar from the c-section.

Her abdomen quickly filled with her now-thinned blood from the same drugs which were saving her life.

In the end, Williams had to have a filter inserted into a major vein to prevent any possible clots from entering her lungs. She was forced to go on bed rest for the next six weeks.

Urging readers to donate to UNICEF or to write to governments, Williams lays out some of the most bleak facts about maternal mortality and infant mortality.

Eighty percent of the 2.6 million infant deaths in childbirth a year are preventable, she says citing UNICEF, and the situation is similar for mothers.

‘Around the world, thousands of women struggle to give birth in the poorest countries,’ she writes.

‘When they have complications like mine, there are often no drugs, health facilities or doctors to save them. If they don’t want to give birth at home, they have to travel great distances at the height of pregnancy. Before they even bring a new life into this world, the cards are already stacked against them.’

In the US that is often to do with underlying conditions, which are not spotted until a women becomes pregnant. Under-developed countries have the same problem, coupled with a severe lack of staff and facilities.

‘I almost died after giving birth to my daughter, Olympia. Yet I consider myself fortunate,’ Williams writes.

‘I am so grateful I had access to such an incredible medical team of doctors and nurses at a hospital with state-of-the-art equipment. They knew exactly how to handle this complicated turn of events.’

For comparison, she shares the story of an 18-year-old girl in Malawi called Mary James Temani, whose baby boy died hours after he was born.

The issue is chronic, and closer to home than many Americans may think.

America has had the highest rate of maternal death in the developed world for years – and it is getting worse, particularly in rural areas and among ethnic minorities.

Historically, maternal deaths in America have been caused by delivery complications including hemorrhages and infections.

But research by the University of Michigan published in November revealed that, for the first time ever, chronic underlying conditions are causing the most deaths and complications in US maternity wards – particularly in poor and rural areas.

Aside from a myriad of diseases, driven by obesity and sedentary lifestyles, one of the most concerning pre-existing conditions was substance abuse disorder as the nation’s opioid epidemic claims millions of women in their 20s, 30s and 40s.

‘Maternal mortality is high compared to peer nations and I fear that due to lifestyle factors the US is leading the pack to increase chronic conditions, particularly among younger women,’ lead author Dr Lindsay Admon, MD, told Daily Mail Online. 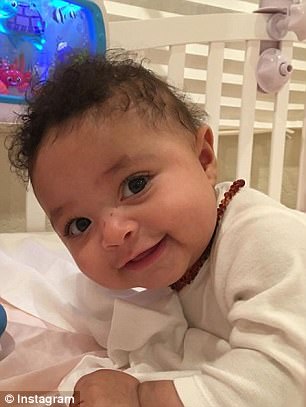 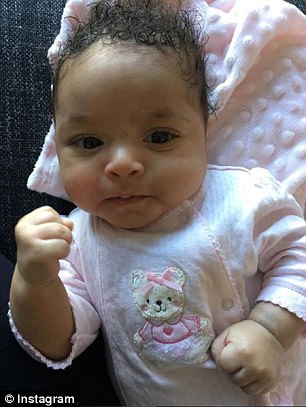 History: Alexis Olympia is the youngest person to cover Vogue in the magazine’s history At first, Williams kept her agony to herself.

She was noticeably absent from social media in the weeks after Alexis’ birth, and was not seen in public until mid-October, when DailyMail.com obtained photos of her meeting with wedding planner Preston Bailey in New Orleans.

She and Alexis walked down the aisle a month later in a star-studded ceremony attended by Beyonce, Ciara and Eva Longoria, to name a few.

It wasn’t until the February edition of Vogue that Williams revealed her harrowing birth ordeal.

Her now-husband Alex Ohanian added: ‘I was happy to change diapers, but on top of everything she was going through, the feeling of not being able to help made it even harder.

‘Consider for a moment that your body is one of the greatest things on this planet, and you’re trapped in it.’

Speaking to Vogue, Williams admitted that being a mother had been a challenge for her, comparing it to her time on the court.

‘Sometimes I get really down and feel like, Man, I can’t do this. It’s that same negative attitude I have on the court sometimes. I guess that’s just who I am,’ said Serena.

‘No one talks about the low moments – the pressure you feel, the incredible letdown every time you hear the baby cry.’

She then added: ‘I’ve broken down I don’t know how many times. Or I’ll get angry about the crying, then sad about being angry, and then guilty, like, Why do I feel so sad when I have a beautiful baby? The emotions are insane.’ 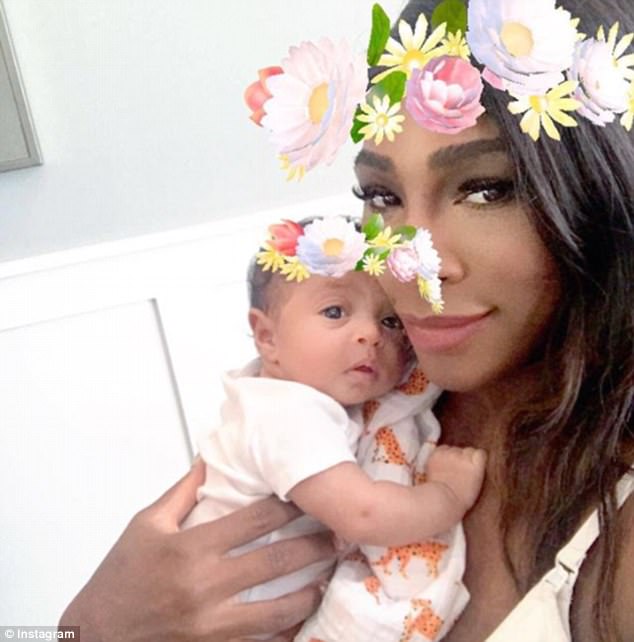 Off the court: Serena said she will try to give Alexis Olympia a normal, tennis-free life

Serena is still adjusting to being a mother on tour, which she noted might be the most rebellious thing she has ever done, and gives credit to the men who have managed to find a balance.

She is quick to note however that it is easier for them not having to carry and then deliver the actual child.

‘It’s so unfair,’ she said at one point while speaking about Roger Federer.

‘He produced four babies and barely missed a tournament. I can’t even imagine where I’d be with twins right now. Probably at the bottom of the pool.’

The men of the ATP Tour have also been offering up tips and gifts to Serena, with Federer’s fellow Swissman Stanislas Wawrinka sending Alexis tiny blue Tod’s driving loafers and Novak Djokovic sending along articles about the all-natural lifestyle he has adopted for his son Stefan. 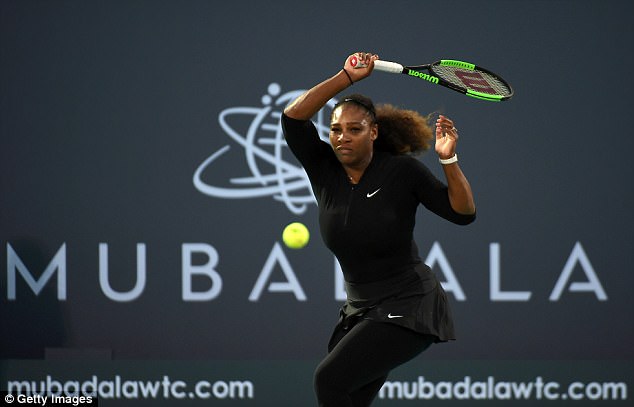 Not quite there: Serena lost in an exhibition match to Jelena Ostapenko in December, with the French Open champion eking out the win 10 – 5 in a super tiebreaker (Serena above during the match)