A serial killer suspect targeted lonely prostitutes with matching initials and strangled one with his wife’s tights, court documents claim.

Photographer Joseph Naso, is alleged to be the infamous American alphabet killer, is said to have kept a numbered list of 10 women, including the four prostitutes he is charged with killing.

Detectives had been silent on details in the ongoing investigation of the 77-year-old photographer.

Authorities around the country are also looking at Naso as a suspect in more cold cases.

In a probable cause statement released Thursday it states that Naso may have used his then-wife’s panty hose to strangle Roggasch, a prostitute whose 1977 murder has been unsolved for decades.

She was number three on Naso’s list of 10 women, the documents state, referred to as ‘Girl near Loganitas,’ whose body was found about four miles east of Lagunitas, a small town in Marin County.

‘DNA testing was done during which the DNA of Judith Naso … was found on the panty hose around her neck,’ wrote Ryan Petersen, a Marin County sheriff’s investigator.

Marin County District Attorney Ed Berberian, who is prosecuting the case, would not comment on whether investigators had made progress in looking at the six other women and locations mentioned on Naso’s list.

The probable cause statement is used to hold Naso in jail after a police arrested him without a warrant.

It was only unsealed after a coalition of media groups led by news agencies challenged a judge’s decision to close the files.

Marin County prosecutors and Naso, who is representing himself at trial, both opposed unsealing the document.

Investigators also said they found numerous nude photos of women who appeared to be dead or passed out, along with logs and journals.

Documents also revealed that DNA collected from fingernail clippings of Colon could also tie Naso to her murder. 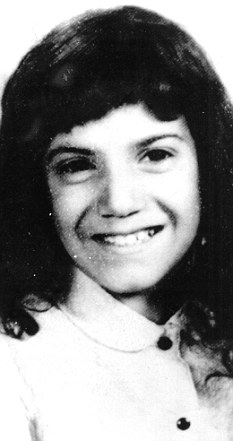 Unsolved murder: Carmen Colon is one of four women Joseph Naso is suspected of killing

She was number two on his list, referred to as ‘Girl near Port Costa.’

Colon’s body was found naked and decomposed by a California Highway Patrol officer in 1978 in the Port Costa area of Contra Costa County.

Authorities say she was also a prostitute, and that prior to her death she had told her sister she was having her photos taken.

Naso acknowledged in an interview with authorities that he photographed a number of women, including prostitutes.

The documents state that Naso had photographed at least one of the victims he is charged with killing: Parsons.

In 1993, Parson’s body was found in Yuba City near where Naso was living at the time, the documents show. She was working as a prostitute in the area at the time and had been strangled.

Investigators said Parsons was number nine on the list, called ‘Girl from Linda,’ for the town in Yuba County where she was born.

Detectives found photos of Parsons and articles about her murder in Naso’s safety deposit box, among other items tying him to her killing.

‘In addition to the photos, numerous writings, logs and a calendar from 1993 detailing his daily activity related to Parsons were found inside his residence as well as additional photos of Pamela Parsons,’ Petersen wrote.

Another Yuba City prostitute that prosecutors believe Naso killed was Tafoya, whose body was found on the side of Highway 70 near Marysville Cemetery in 1994. Investigators said they found writings, photos and news clippings of Tafoya and her murder in Naso’s possession.

‘The last entry on the list made reference to a girl from Marysville, with (cemetery) written next to it,’ the documents state.

Berberian said his office opposed releasing the probable cause statement because of the ongoing investigation.