Seth Moulton drops out of the Democratic presidential race

Donald Trump on Friday blamed Congressman Seth Moulton’s exit from the Democratic presidential race for the over 500 point drop in the Dow that occurred after his morning Twitter blitz against China.

‘The Dow is down 573 points perhaps on the news that Representative Seth Moulton, whoever that may be, has dropped out of the 2020 Presidential Race!,’ the president tweeted.

Earlier in the day Trump demanded U.S. firms bring their companies ‘HOME’ and to seek ‘alternatives to China’ – a country he has long derided for ‘ripping off’ the United States – to which the markets responded to with a plunge.

Moulton was asked about the president’s tweet by reporters at Democratic National Committee Summer meeting in San Francisco, where he formally announced his exit from the race.

‘I’m glad he thinks that I have more influence over Wall Street than he does,’ he responded. ‘He’s probably thrilled that I’m out.’ 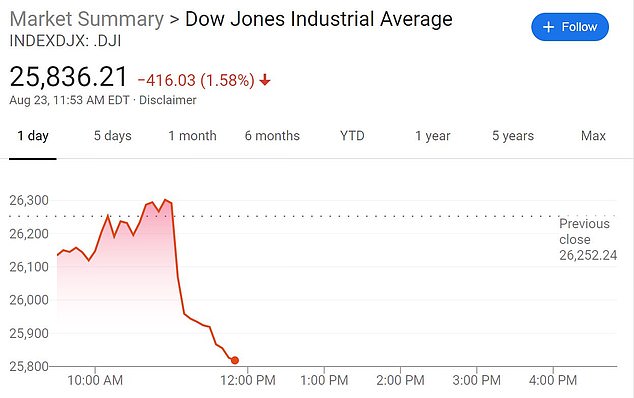 SUDDEN DROP: The Dow dropped steeply as soon as Trump tweeted about China

The Dow Jones Industrial Average plunged more than 500 points Friday after Trump issued a furious series of tweets about China and called the country’s leader an ‘enemy.’

The market dropped immediately after Trump said the U.S. would be ‘better off’ without its leading trading partner and demanded U.S. companies find an ‘alternative’ place from which to operate.

Trump unloaded on China hours after it announced it was imposing tariffs on $75 billion of U.S. products. The president also made time to blasting Federal Reserve Chair Jerome Powell after he failed to send a clear signal about dropping interest rates.

Earlier in the day, Moulton announced he’s dropping out of the Democratic presidential race after failing to make a single primary debate.

He explained his decision at the DNC meeting.

‘I am ending my campaign for president,’ Moulton, a Democrat from Massachusetts, said. ‘Though this campaign is not ending the way we hoped, I am leaving this race knowing that we raised issues that are vitally important.’ 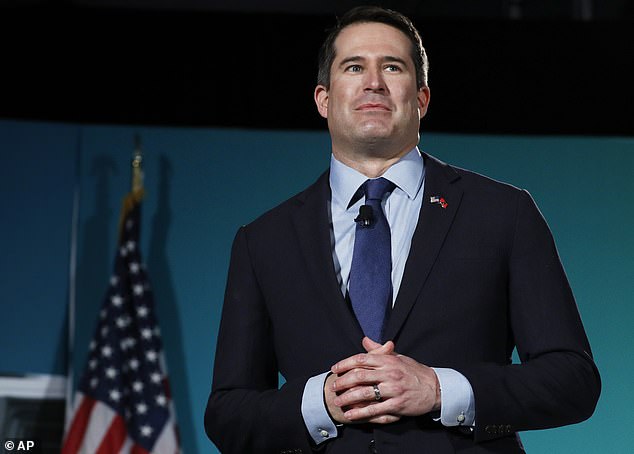 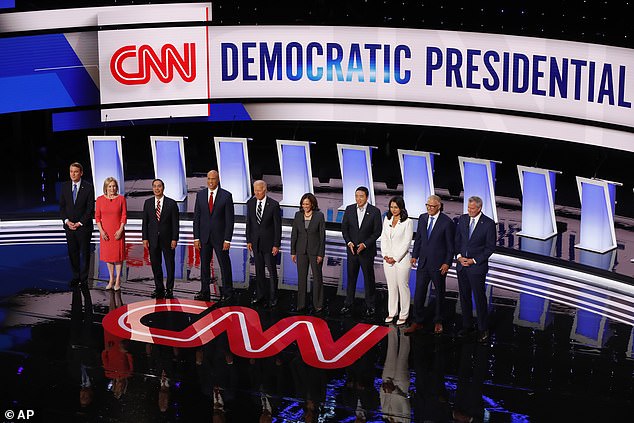 ‘For the first time in my life, I talked publicly about dealing with post-traumatic stress from my four combat tours in Iraq,’ he noted.

Moulton, a Marine who is an Iraq war veteran, failed to gain traction in the polls.

He did not even garner 1 per cent in a CNN poll out earlier this week.

His failure to meet poll numbers or garner enough donors kept him out of the first round of presidential debates in Miami and Detroit. He was not expected to make the stage for September’s debate in Houston.

He is the third candidate to drop out of the race this week, following Washington Governor Jay Inslee and former Colorado Governor John Hickenlooper. Representative Eric Swalwell dropped out earlier this summer.

He is expected to run for re-election to his House seat, in the northern part of Boston, next year.

‘While this is the end of my campaign, it is certainly not the end of our efforts,’ he told the DNC members. ‘I will once again be running for Congress in the 6th District of Massachusetts, my home, and I can’t wait to get back at it.’

Moulton said he had no plans to endorse a fellow contender but spoke warmly of Joe Biden, adding the race had essentially come down to the former vice president, Elizabeth Warren, and Bernie Sanders.

‘I think it’s evident that this is now a three-way race between Biden, Warren and Sanders, and really it’s a debate about how far left the party should go,’ he told The New York Times. 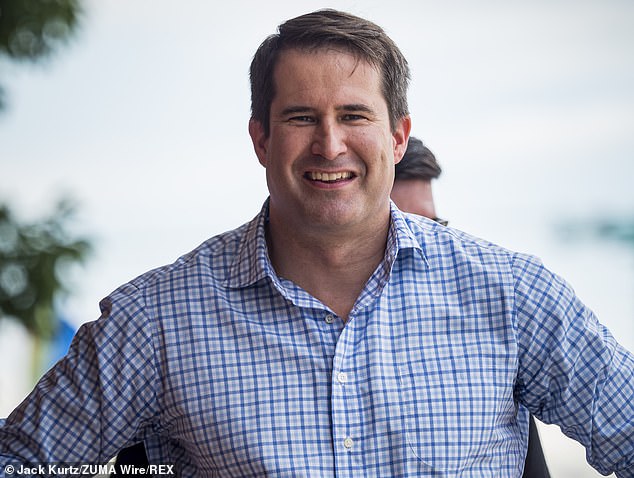 Moulton said he would seek re-election to his House seat

He blamed his late entry into the contest for his campaign failing to catch fire. He entered the Democratic primary in April, shortly before Biden threw his hat in and as Pete Buttigieg’s campaign was taking off.

‘Candidly, getting in the race late was a mistake,’ he said. ‘It was a bigger handicap than I expected.’

First elected to Congress in 2014, he made a name for himself as a bit of a rebel.

He won his seat by defeating incumbent Representative John Tierney in that year’s primary and then shook up House Democrats by mounting a leadership bid against Speaker Nancy Pelosi. He remains a Pelosi critic.

On Monday, Moulton will host a veterans’ town hall meeting in Fairfax, Va., with retired Army Gen. Stanley A. McChrystal to talk about veterans’ issue.

‘I’m not going anywhere. I’m only 40 years old,’ he told The Washington Post.