White schoolchildren who put a black pupil through a ‘mock slave auction’ and allegedly called him a ‘n****r’ will not face criminal charges, it emerged today.

The group of seven teenagers staged the event on a lunch break – tying the black boy to a post on school grounds and calling him a ‘cotton picker’, it was claimed.

The black boy was said to have become upset after he was chained to a lamppost, whipped with thin branches and called names at the unnamed school in Bath.

Avon and Somerset Police today revealed officers have now concluded their investigation into the incident which officers treated as a hate crime.

The force said all seven youths admitted their involvement in the incident that took place on January 22. However, none of them were charged with a criminal offence.

Instead, two of them agreed to participate in ‘community resolution’, a form of restorative justice led by the victim that does not result in a criminal record.

Had the two youths not accepted this alternative, one of them would have been prosecuted. The boys knew this when making their decision, police said.

The victim’s family were consulted about this course of action and their wishes were taken into account, according to the force.

A police spokesman told Bath Live: ‘Every aspect of the incident has been taken into account, including the wishes of the victim’s family, and as a result two boys will be subject to a community resolution process for their part in the offence.’

The spokesman added: ‘Community resolutions are a powerful tool focusing on reparation and are considered to be the most appropriate outcome in this case.

‘We take hate crime extremely seriously and recognise the devastating impact it can have on victims and their lives. 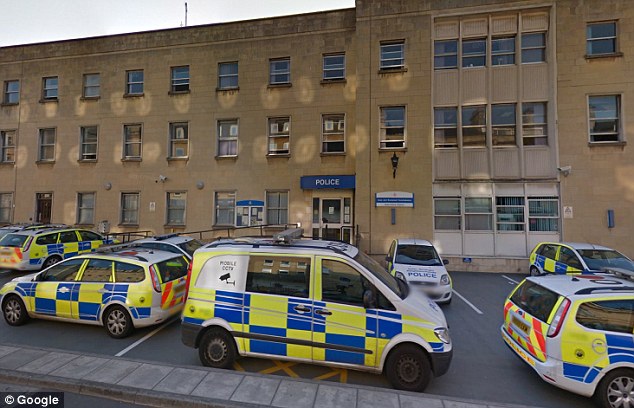 ‘There’s no room for this type of crime in Avon and Somerset and we’ll continue to work with our partner agencies and communities to stamp out offences motivated by prejudice or hate.’

The Crown Prosecution Service is the body that decides whether criminal charges can be brought following a police investigation.

In this case, the CPS decided there was enough evidence to charge only one of the seven youths with an offence.

That youth was given an ‘out-of-court disposal order’, enabling justice to take place outside the court system.

In response to subsequent questions, police said: ‘All youths admitted to being present at the incident as well as their roles during this incident to varying degrees.

‘Having reviewed all the evidence, CPS and police felt CR (community resolution) was the most appropriate outcome for two of the group.

‘CR has to be accepted by those taking part and if not accepted the CPS were only willing to charge one youth. However, this was explained and CR was accepted by both youths.

‘By law, criminalising youths must be deferred when it is felt rehabilitation would better serve, and both CPS and police agreed rehabilitation through the CR process was the most appropriate outcome for this incident.’

A CPS spokesman said: ‘The Crown Prosecution Service received a file of evidence from Avon and Somerset Police on May 16 relating to an incident involving seven youths at a school in Bath, Somerset, on January 22.

‘Following receipt of this file, one youth admitted his involvement in the incident and was given an out-of-court disposal order.

‘The evidence was considered in accordance with the code for Crown Prosecutors and the CPS concluded there was insufficient evidence to prosecute the remaining six youths.

‘The CPS, through the police, has liaised with the victim’s family and they have been consulted prior to the decision being made.’