Seventeen species of bees are EXTINCT in areas of the UK as climate change and pesticides damage their populations, WWF claims

Seventeen types of bees are now ‘extinct’ in parts of the East of England, considered one of the most diverse habitats for the pollinators in the UK.

Climate change, habitat loss, pollution and disease have all been blamed for the losses.

Species like the rare Great Yellow bumblebee and the Potter Flower been have been completely wiped out, last spotted in the region decades ago.

A further 25 are under threat and 31 more are at-risk, a report from the WWF claims.

17 pollinator bees are now considered ‘extinct’ from parts of East of England, one of the richest habitats for bees (stock image)

The report was published by the WWF (World Wide Fund for Nature) and the charity Buglife and called bees ‘essential’ to the UK, saying they are worth £690 million ($880m) per year to the economy.

The study focused on the East of England made up of the areas of Bedfordshire, Cambridgeshire, Essex, Hertfordshire, Norfolk and Suffolk.

The loss, fragmentation and degradation of their habitats, the use of pesticides and pollution were given as key reasons for the decline in these areas.

According to the report, their loss have huge implications for farming and consumers – including how many apples are produced by farmers.

‘If wild pollinator populations were healthier there would be more apples on British trees (£5.7 million [$7.3m] worth of Gala apples alone),’ the report said.

‘Almost 90 per cent of wild plants and 75 per cent of leading global crops depend on animal pollination.

‘Many species of bees are on the brink of extinction in parts of the UK with some types lost entirely’.

The Bees Under Siege report analysed recorded data for 228 species of bees. 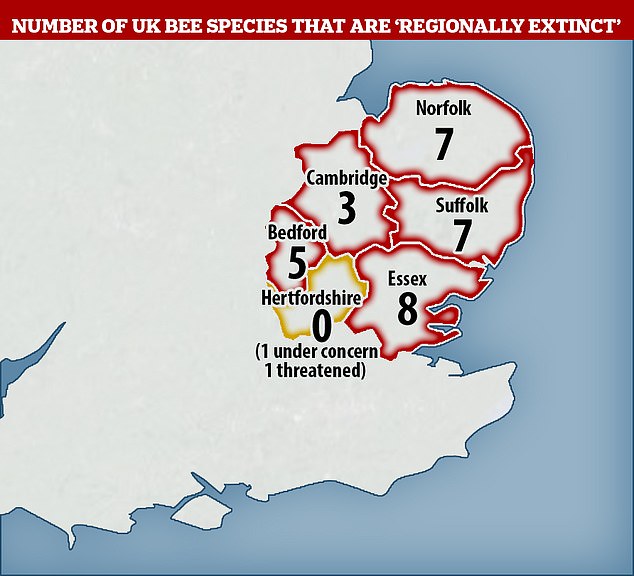 Species include the rare Great Yellow bumblebee and the Potter Flower bee which have been wiped out from the East of England. A further 25 are under threat and 31 are at-risk. The graphic shows the number of ‘regionally extinct’ species in each county according to the WWF

Tanya Steele, chief executive at WWF, said: ‘The UK is one of the most nature-depleted countries in the world and the fact that our precious pollinators are in peril is a sad illustration of the dramatic decline in wildlife we’re seeing all around us.

‘We desperately need targeted action if we’re going to bring under-pressure wildlife back from the brink.

Matt Shardlow, chief executive at Buglife, said: ‘Our study found that many of the rarer, more specialist bees are battling to keep up with the changing face of their landscape and increasingly hot weather. 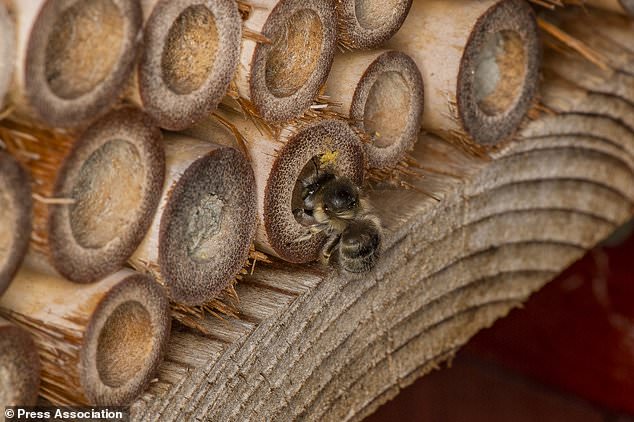 The report analysed data recorded for 228 species of bees (WWF) and cite climate change, habitat loss, pollution and disease for the loss of bees from the region (stock image)

‘Six species are now so endangered they are only known to survive on single sites – this is a very unhealthy picture.’

An important region for agriculture, the research centres where the analysis were conducted were in Bedfordshire, Cambridgeshire, Essex, Hertfordshire, Norfolk and Suffolk.

The report recommends a number of actions to stabilise populations of bees and reverse declines and called for the upcoming Westminster Environment Act to be ‘ambitious enough’ to develop a nature recovery network for bees.

These include better protection of coastal habitats and the use of sea walls as well as brownfield sites rich with wildlife.

Landowners were also encouraged to work together to better manage disjointed habitats across the region.

WHY ARE BEES UNDER THREAT?

The threat to bees include loss of habitat, including pollution and pesticide use and climate change.

Habitat loss, fragmentation and degradation is generally thought to be the most important factor driving bee declines through the reduction of food and nesting resources available to pollinators.

These losses are as a result of changes in agricultural methods such as re-seeding, intensive tillage, drainage, and use of fertilisers and herbicides as well as the development of previously species rich grassland.

Neonicotinoids are neuro-active chemicals similar to nicotine that have proved to be highly effective at protecting crops from pests, especially aphids and root-eating grubs.

They can either be sprayed on leaves or coated on seeds, in which case they infiltrate every part of the growing plant.

Years of research have shown that under controlled conditions the chemicals are toxic to honey bees and bumblebees, causing brain damage that can affect learning and memory and impair their ability to forage for nectar and pollen.

The chemicals are a key battleground in the environmental movement – with campaigners demanding a ‘complete and permanent’ ban on the pesticides as they are suspected to be harmful to bees.

Alterations in insect distributions in the UK are already being seen in response to recent climate change.

Climate change may also aid the natural colonisation of new species, as has already been seen in Britain with bees such as Grey-backed mining bee, Early colletes, Ivy colletes and Variable nomad.

These effects are worse for specialist or species found in single habitats, and small, isolated populations.

Climate change is widely predicted to increase extreme events such as summer droughts, flooding and storms, all of which could directly impact bees in the East of England.