A seventh child has died following a ‘severe outbreak’ of a potentially life-threatening virus at a New Jersey pediatric care facility.

The news comes a day after the New Jersey Department of Health announced that six children had died and 12 had fallen ill after contracting adenovirus at the Wanaque Center for Nursing and Rehabilitation in Haskell.

On Wednesday, health officials revealed that a seventh child, who had been hospitalized, died on Tuesday night while 11 others remain sickened.

Adenoviruses usually cause mild illnesses, but health officials say that outbreak is ‘severe’ because all of the infected children have compromised immune systems.

Seven children with compromised immune systems are now confirmed dead and another 11 are ill after contracting adenovirus at the Wanaque Center for Nursing and Rehabilitation in Haskell, New Jersey (pictured)

According to a statement from the Department of Health, the Wanaque Center ‘has been instructed not to admit any new patients until the outbreak ends and they are in full compliance.’

The facility has been cited for numerous health code violations in the past.

According to NBC News, citations were issued in 2016 and 2017 for handwashing deficiencies, not storing syringes properly, improperly disinfecting surfaces and syringes, and unsanitary storage of oxygen tank tubing.

New Jersey Governor Phil Murphy said on Tuesday that ‘the Department of Health has recommended vital measures to enhance protections against the further spread of infection and will continue its active on-site surveillance.

‘I am confident that the steps being taken by state and local officials will minimize the impact to all those who remain at the facility, including patients and employees.’

Adenoviruses are a group of viruses that infect the linings of the eyes, lungs, intestines, urinary tract, and nervous system.

They are the cause of several infections including the common cold, respiratory tract infections, pink eye, diarrhea, bronchiolitis and pneumonia.

Adenoviruses are responsible for about 10 percent of fever-related infections among US children, and most children will have at least one type of infection by age 10.

Once exposed, there is an incubation period of two to 14 days before symptoms appear.

Because they are highly contagious, adenoviruses are common among places with large groups of kids including hospitals, schools, camps and daycare centers.

According to the Centers for Disease Control and Prevention (CDC), adenoviruses can be spread by an infected person coughing or sneezing. Droplets fly through the air and land on surfaces.

A child can catch the virus by touching an infected person, or if they touch the toy or an object of someone with the virus and then touch their face without washing their hands.

In some cases, adenoviruses can be spread through the stool of an infected person, such as while changing a diaper. 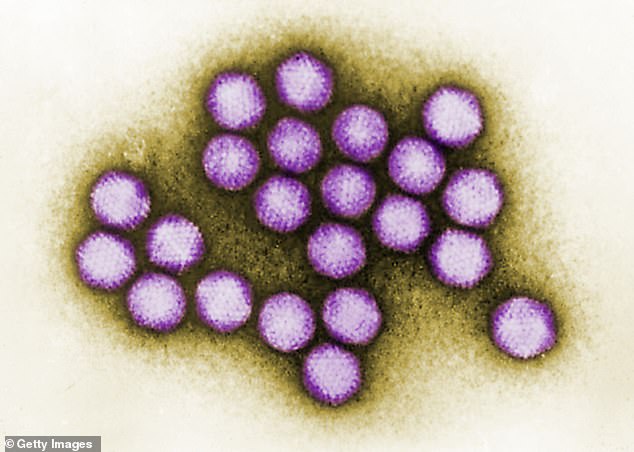 Adenoviruses are a group of viruses that infect the linings of the eyes, lungs, intestines, urinary tract, and nervous system. Pictured: Colorized transmission electron micrograph of adenovirus

It’s also possible to get sick by eating food prepared by somebody who did not wash their hands properly after using the bathroom.

Those who have weakened immune systems are at an increased risk of developing a severe illness or neurological diseases from an adenovirus infection.

The origin of the outbreak at the Wanaque Center remains unclear, but officials say the facility notified them of some respiratory illnesses on October 9.

Nicole Kirgan, a spokeswoman for the health department, told Daily Mail Online in a statement that the outbreak was caused by adenovirus type 7.

According to the CDC, type 7 is most commonly associated with acute respiratory disease.

A vaccine has been approved for types 4 and 7 by the US Food and Drug Administration, but only for US military personnel at risk for infection.

Kirgan added: ‘The combination of a worse strain of adenovirus together with a fragile population has led to a more severe outbreak.’ 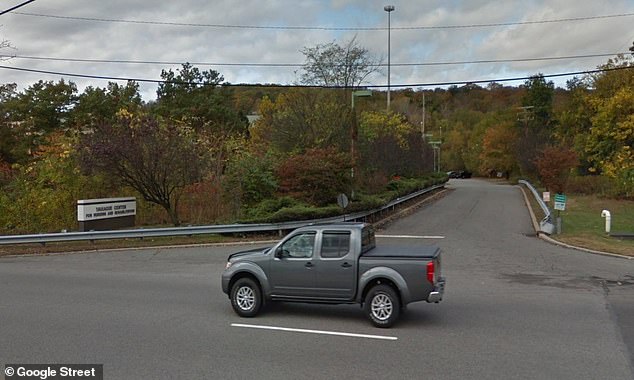 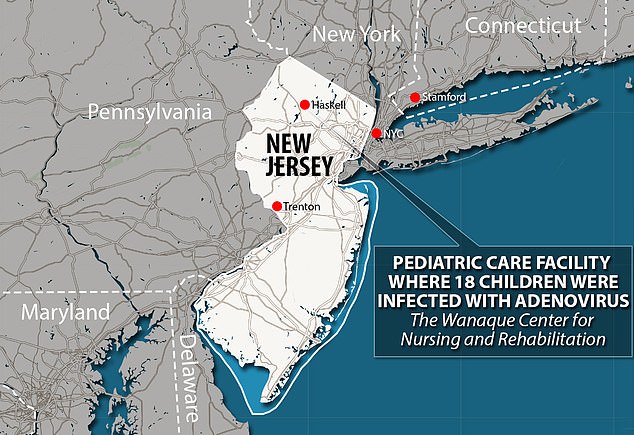 The origin of the outbreak at the Wanaque Center remains unclear, but officials say the facility notified them of some respiratory illnesses on October 9. Pictured: Map showing the location of the outbreak

The Wanaque Center says on its website that it is a for-profit facility that works with ‘with medically fragile children’ from newborn to 22 years old.

It also offers an adult nursing home and rehabilitation center for either short-term or long-term care.

In 2016, 23 children were infected with adenovirus after receiving eye exams at Children’s Hospital of Philadelphia, resulting in the death of an infant.

Staff attributed the outbreak to medical personnel not wearing gloves and not cleaning equipment properly.

Philly.com reported in August that the parents of the infant who died, Melanie Sanders, are suing the hospital for negligence.