Several sex offence charges against Cardinal George Pell will be dropped because a complainant is too ill to testify in court.

Pell, 76, is fighting historical sex offence charges involving multiple complainants at a committal hearing before Melbourne Magistrates Court that will determine if he stands trial.

As the third week of the pre-trial hearing wrapped up on Friday, prosecutor Mark Gibson SC said one of the complainants would not give evidence because he was ‘medically unfit’.

Pell’s lawyer immediately requested the charges be removed from the committal proceedings.

‘I ask that these charges be struck out,’ Robert Richter QC said.

Mr Gibson said the prosecution will formally withdraw the charges when the hearing resumes on Tuesday.

The court has not released details of the charges against Australia’s highest-ranked Catholic.

Earlier on Friday, a woman said her brother was crying when he told her Pell allegedly committed a sex offence against him.

The woman, who can’t be named for legal reasons, said she and her brother were on their way home from a birthday party when he turned towards her and said ‘you don’t know what happened to me’.

‘And then he said ‘it was George Pell’,’ she told the court via video link.

Mr Richter suggested the pair were drunk at the time of the conversation, which took place about 16 years after the alleged sex offence.

‘He was crying, wasn’t he?’ Mr Richter asked. 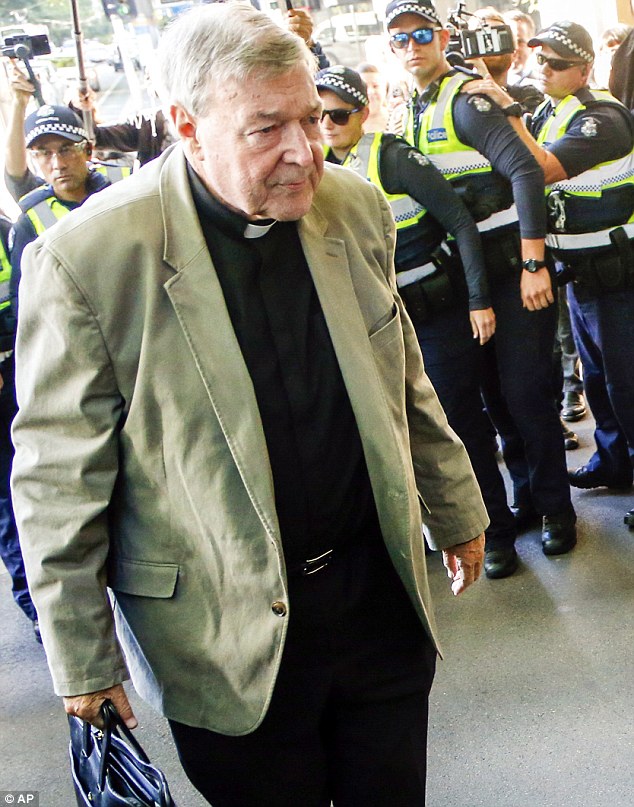 Pell, 76, is fighting historical sex offence charges involving multiple complainants at a committal hearing before Melbourne Magistrates Court that will determine if he stands trial

‘He was,’ the woman answered.

The mother of another complainant told the court she changed her mind about going public with sex offence allegations.

The woman spoke about the allegations to ABC journalist Louise Milligan, who later published a book.

‘At the time you withdrew your consent for publication, it was because you feared that it would taint any criminal proceedings,’ defence barrister Ruth Shann said.

Ms Milligan is scheduled to give evidence on Tuesday.

Pell’s lawyers on Friday also said another complainant was among a group of swimmers who ‘gravitated’ and ‘swarmed’ Pell because he used to play lower-grade football for Richmond.

‘He was a tall, strong man and they swarmed him, didn’t they?’ Mr Richter said.

‘As soon as he stopped swimming his laps and stood in the pool, they would gravitate towards him.’

Pell is accused of committing sex offences at a swimming pool, cinema, church, and during a water skiing outing at a lake in rural Victoria.

The hearing will resume on Tuesday and is scheduled to finish on Thursday with magistrate Belinda Wallington reserving her decision.