Several people are injured in ‘gun and knife attack’ near Stuttgart

A violent clash in Germany has left two men in their 20s injured with one in a serious condition while two of the suspects are still being pursued by police.

Police and special forces have deployed helicopters around a train station in Plochingen, which is 15 miles from Stuttgart, where two people suffered gunshot and knife wounds this afternoon.

In a press statement released this evening, Reutlingen Police Department said: ‘The 21 and 29 year old [who were] injured were admitted to clinics.

‘According to [current intelligence], the 29-year-old suffered stab wounds and the younger [gunshot] wounds.’

They added that the younger man is in a serious condition.

Policemen of a special task force stand on a street next to their vehicle. Police are searching for three fugitives after an altercation with two injured people in the city in the Esslingen district

In a Twitter post earlier today, the police said the men were injured during a confrontation near the railway station in Plochingen.

‘One suspect is arrested, we are searching for other suspects with special forces,’ they added.

Two of the suspects are still at large.

‘We arrested a person in Esslingerstrasse near a gas station,’ a police spokesman told web.de. 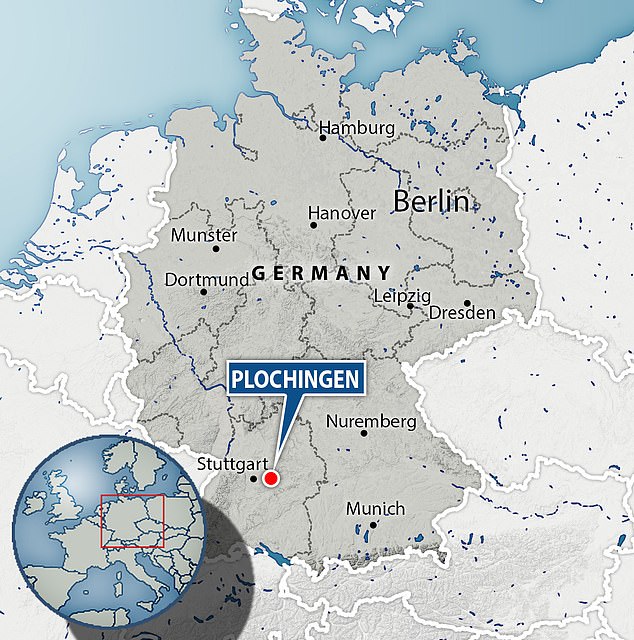 A locator map showing the small city of Plochingen, which is 15 miles from the southern city of Stuttgart

In the later press release, they added that the man in custody is 20 years old and was unarmed when arrested.

German authorities have cordoned off nearby streets and are urging people to stay indoors.

According to a tweet by the Plochingen police force: ‘According to the current status, two people are said to have been injured in a dispute in Esslinger Strasse.’ 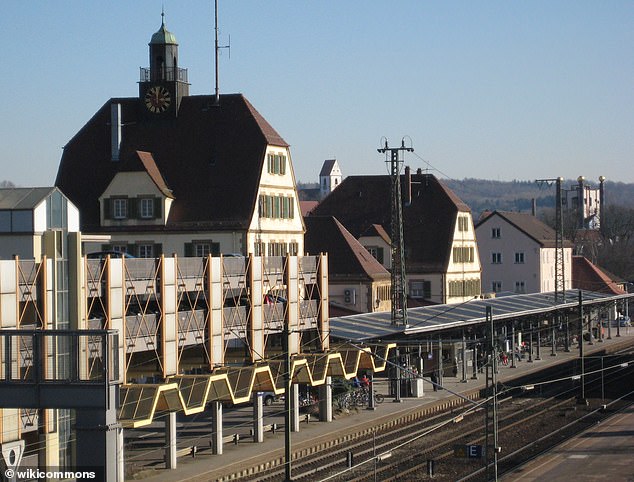 Pictured: A file photo shows Plochingen railway station, which is nearby to where the incident was reported to have happened

‘The search is ongoing, we are on the spot with strong forces,’ they added.

‘If you don’t have to go to the city urgently, it’s best to stay at home and avoid the area.’

The motive behind the attack is not currently known and ‘forensic technicians are on site to secure evidence,’ the police said.