More than 50 million people are bracing for severe weather from the Plains to the Southeast as scattered thunderstorms prompt flash flood alerts, possible tornadoes and hail.

A large weather system is expected to bring damaging wind gusts and large hail for parts of the South and into the Appalachians, Ohio Valley and Great Lakes.

Some rescues were conducted in the Jolly Mill community near Pierce City.

Heavy rain and flash flooding inundated parts of southwest Missouri during the weekend, prompting water rescues and evacuations. Pictured is what’s left of a bridge that was destroyed on in Anderson 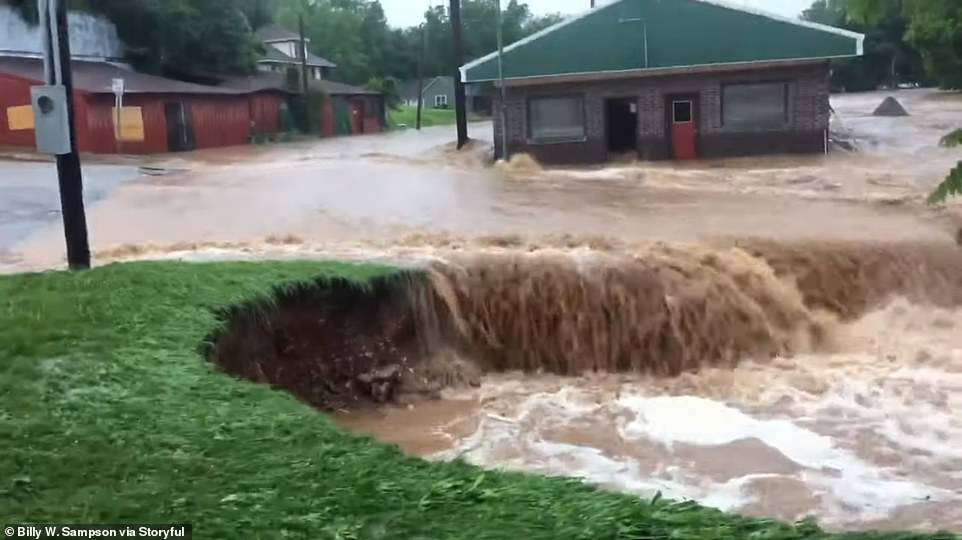 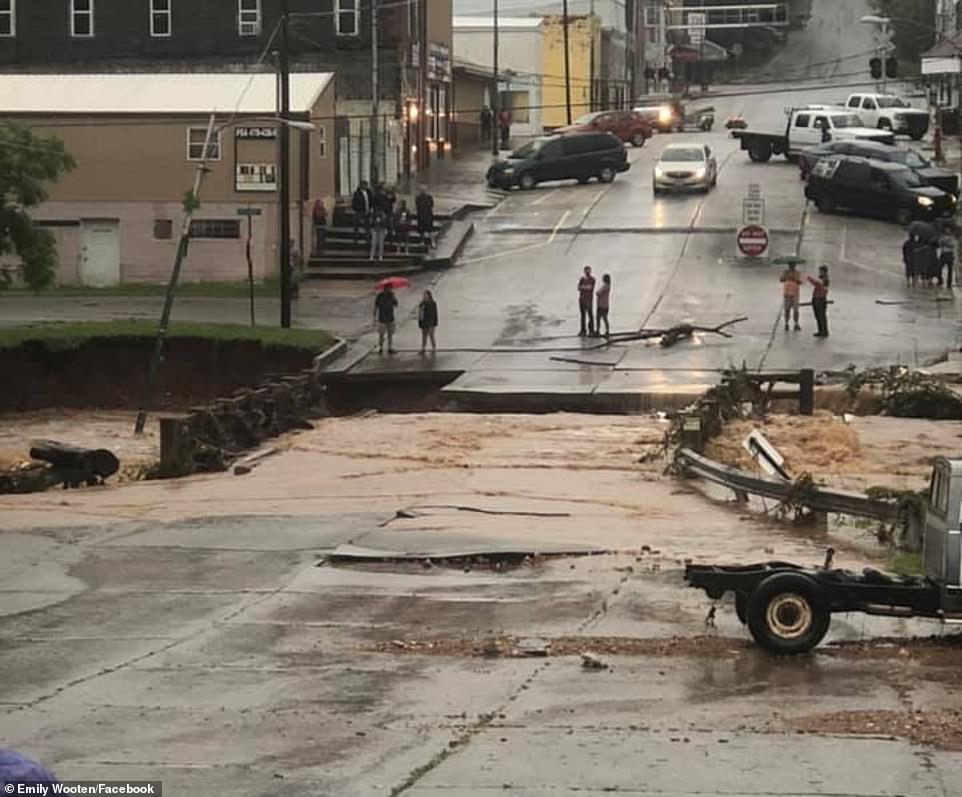 Residents recorded the fast-moving water as it flooded out Main Street in Anderson (pictured on Sunday). No serious injuries were reported

About 20 homes were evacuated in Seneca and the McDonald County town of Anderson was nearly closed off after floods destroyed a bridge in the downtown.

Residents recorded the fast-moving water as it flooded out Main Street in Anderson.

No serious injuries were reported.

Haskett said one of the water rescue victims had a heart issue during the rescue and was hospitalized.

The National Weather Service (NWS) said the water has begun to recede, with dry weather and highs in the 80s forecast for the week.

Authorities said the severe weather that moved through northern Indiana spawned a possible tornado in South Bend that damaged buildings and knocked down trees and power lines.

The NWS received reports of a possible tornado as part of storms Sunday night, but it didn’t immediately confirm a tornado. No injuries were reported.

A building housing the Growing Kids Learning Center, a preschool and daycare facility in South Bend, was among those damaged.

The facility was closed at the time of the storm. The storms left hundreds of people in the area without power. 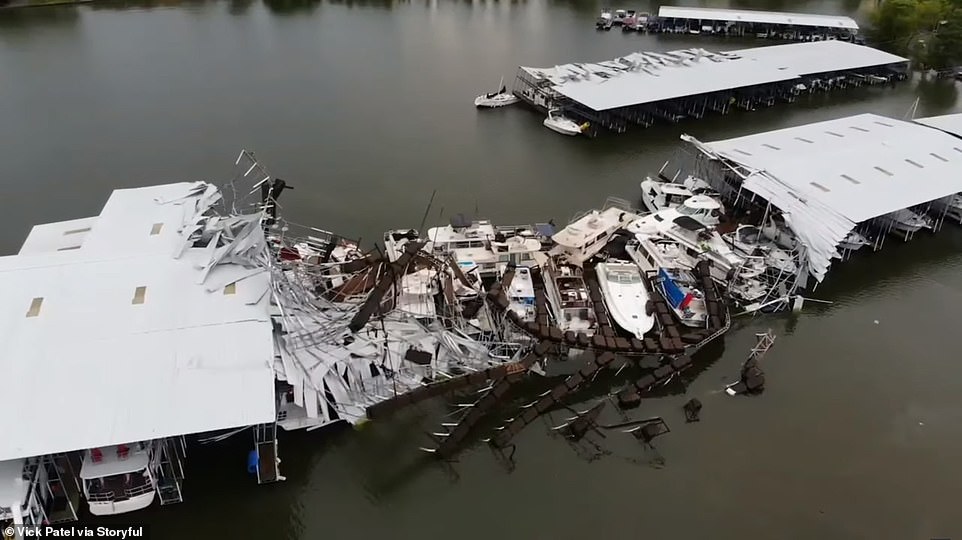 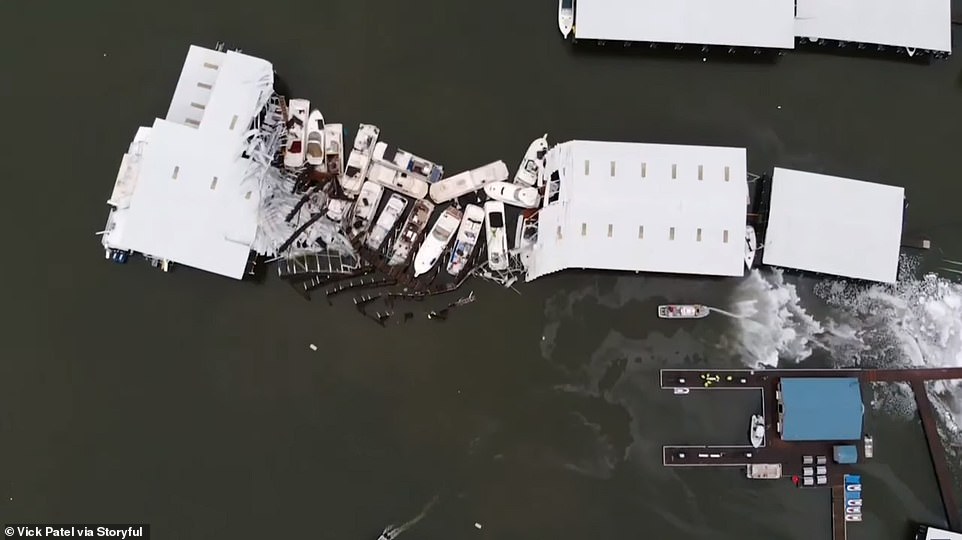 Weather experts said with the ongoing severe weather, one or two more tornadoes cannot be ruled out.

Rescuers had to help several people who became stuck in their cars after the water rose around them, and at least one car caught fire after an electrical wire fell on it.

It wasn’t immediately clear if anyone was injured.

More than 119,000 homes and business in Texas, Arkansas, Louisiana and Mississippi were without power as of 1pm Monday afternoon, according to poweroutage.us.

Drone footage showed several damaged boats and buildings at the marina. Trees and power lines were also downed in the area but no injuries were reported. 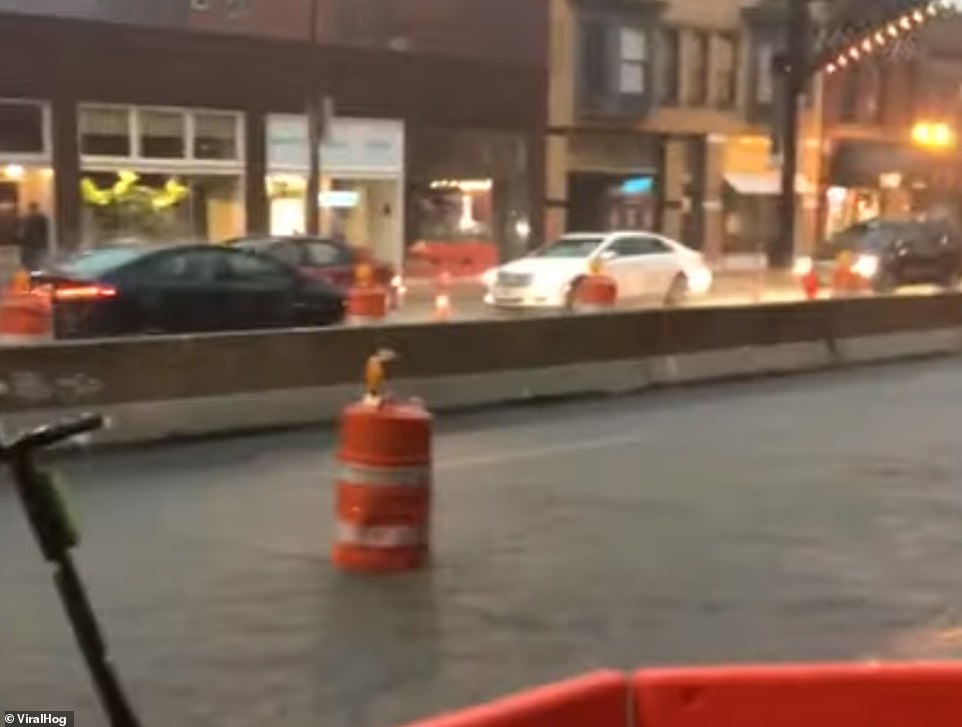 Meanwhile in Ohio, rain pours flooded North High Street in Columbus. A resident recorded a video that showed a traffic barrel (pictured) flowing down the flooded street outside of the Two Truths bar

A resident recorded a video that showed a traffic barrel flowing down the flooded street outside of the Two Truths bar.

In Houston, Texas, a high water rescue took place around 5.30am in Houston, according to local media reports.

There are several areas in Houston where high water has been reported.

The NWS issued a heat advisory Monday for a five-county area that includes Savannah, saying hot temperatures and high humidity could push the heat index to 106 degrees.

High temperatures Monday were forecast to reach 97 degrees in Savannah and Statesboro, with a high of 98 degrees predicted in Hinesville.

The weather service said people spending time outdoors in those areas should drink plenty of fluids and avoid direct sunshine.

Forecasters also warned against leaving children or pets inside vehicles. 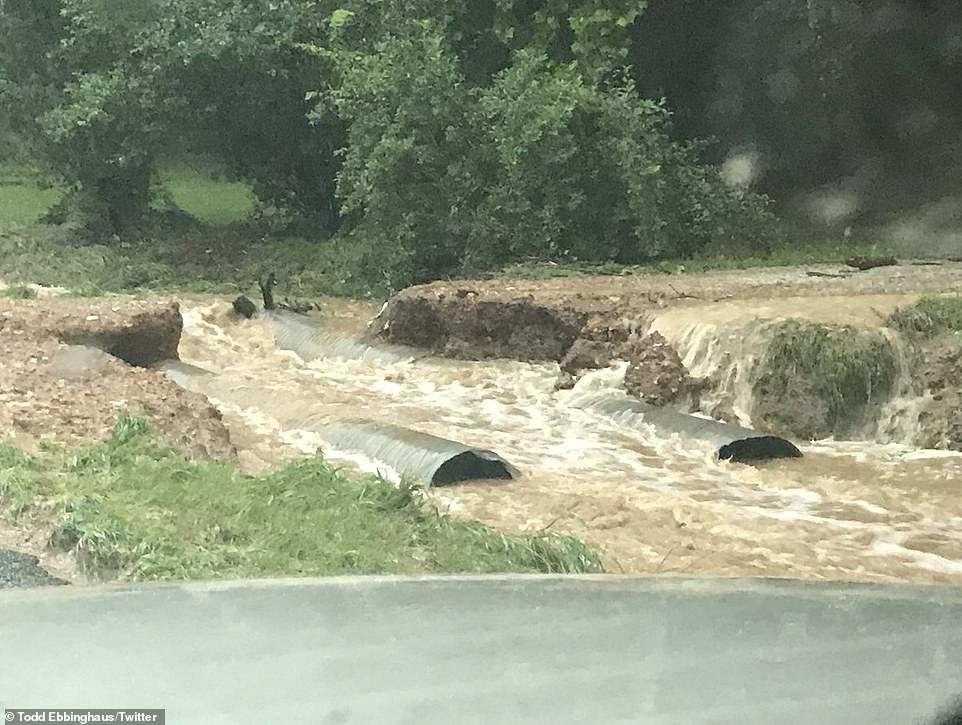 Todd Ebbinghaus shared this photo in McDonald County in Missouri. He said the county was out of power for six hours and have been cutoff from Goodman because a bridge is out 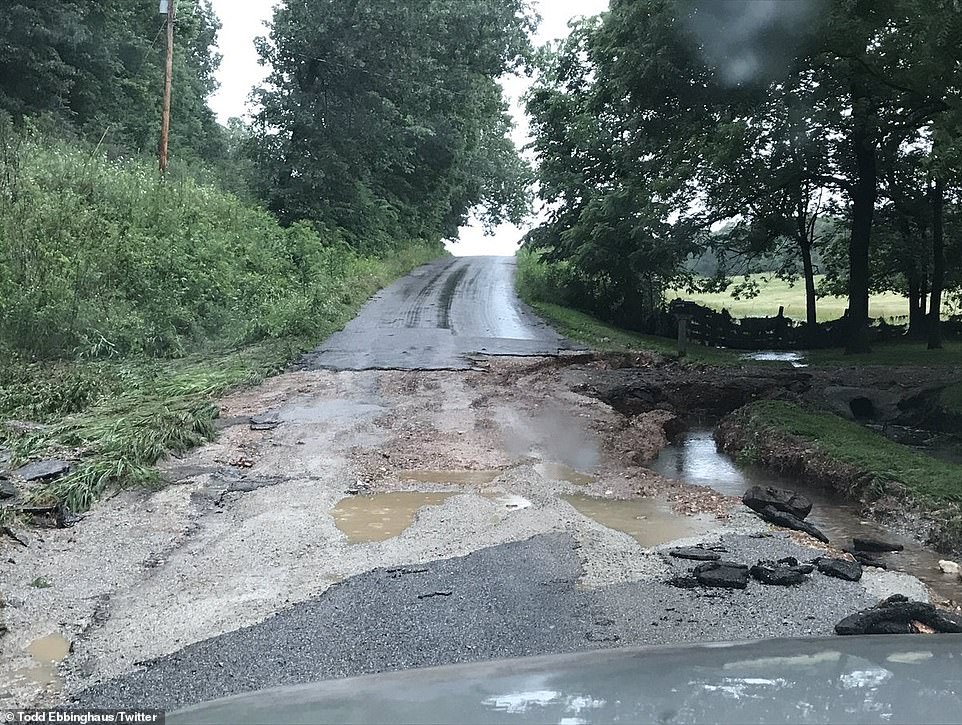 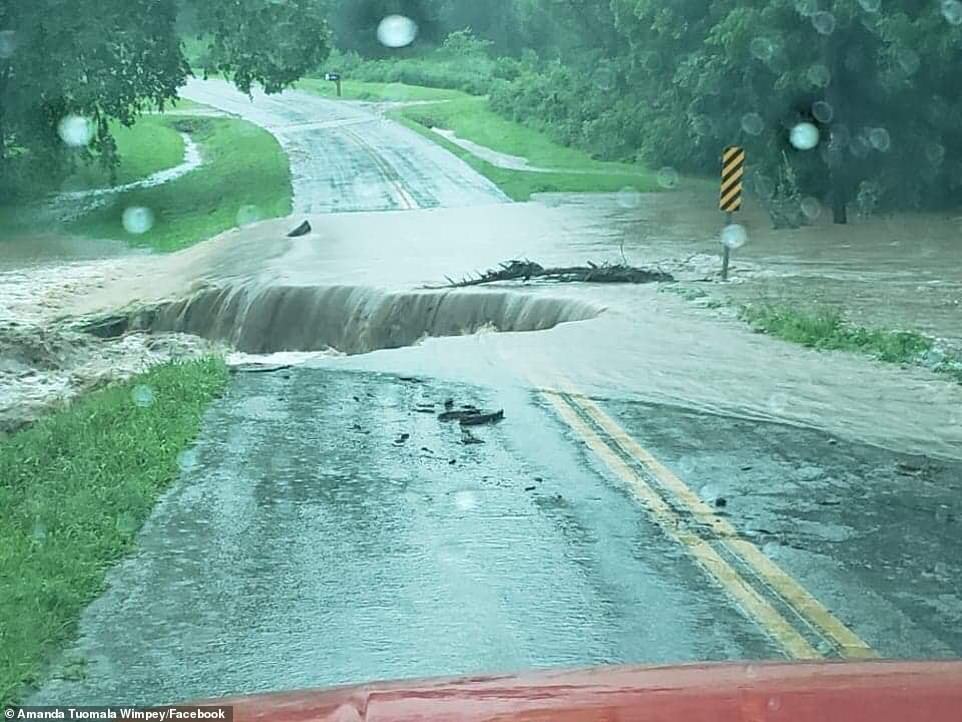 Amanda Tuomala also shared this photo of McDonald County in Missouri. It shows the roadway completely washed away in the area

It’s been a month since record-breaking heat settled over the same area. Savannah saw four days of temperatures at or above 100 degrees from May 25 through May 28.

The deadly storm system, being referred to as a ‘derecho’, began last week and continued through the weekend.

‘Derecho’ is Spanish for ‘straight’ in English, and used in weather terminology to refer to storms like Friday’s deadly system.

It’s a large grouping of thunderstorms the come along with widespread wind damage, spanning a straight line for a continuous path of at least 250 miles.

At least 3 people were killed in Kentucky, Missouri and Illinois by downed trees due to the storms, The Weather Channel reported.

Flash flood warnings will persist for Kansas, Missouri, Arkansas and Oklahoma into early this week.

A large part of Oklahoma remains under a severe thunderstorm warning, with watches in effect in Kansas, Missouri and Arkansas, as well.

More severe weather on Tuesday will likely be in parts of the Midwest, with strong winds, large hail and brief tornadoes possible. 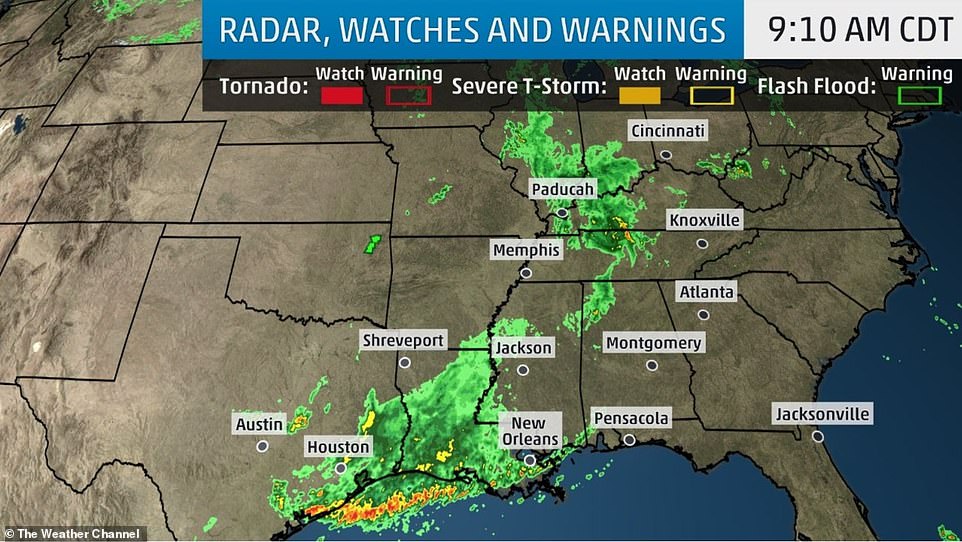 More severe weather on Tuesday will likely be in parts of the Midwest, with strong winds, large hail and brief tornadoes possible 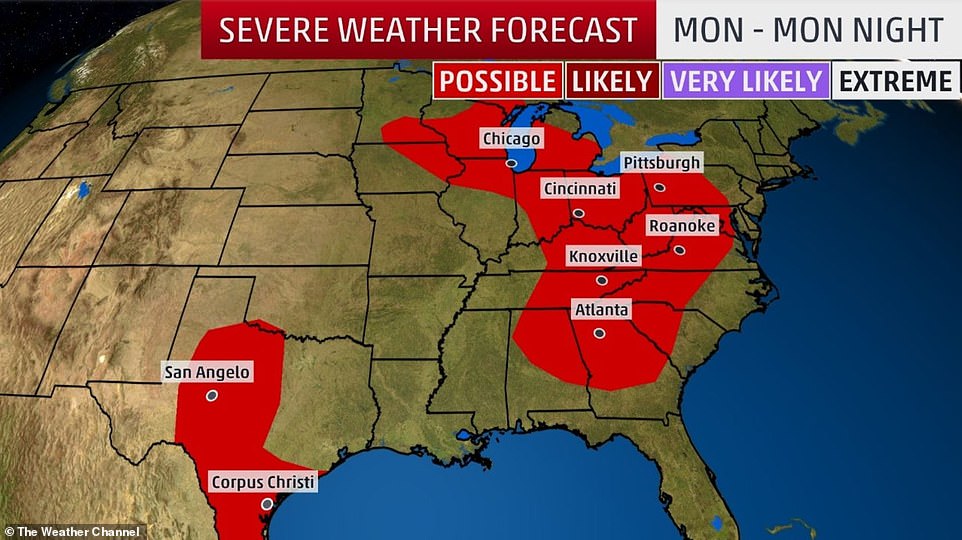 Severe weather is forecast for parts of Texas, Atlanta, Chicago, Cincinnati and Pittsburgh through Monday night