Severely neglected poodle that lived under a bed for two years gets ‘Cinderella’ makeover to remove its thickly matted hair containing ‘a tremendous amount of fecal matter and bacteria’ which prevented it from eating, drinking and even walking properly

A severely neglected poodle that had been living under a bed for two years has been adopted after getting a life-saving, ‘glow up’ makeover.

Richmond SPCA, in Richmond, Virginia, revealed Wednesday the heart-warming story about a seven-year-old poodle that had been dropped off at the shelter by its former owner in April.

According to his former owner, the dog — which the animal shelter staff called Lionheart — had been living under a bed for two years. 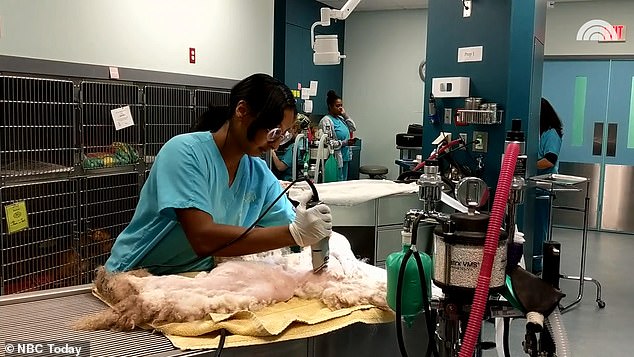 Officials said they wouldn’t have known the dog was a poodle had the former owner not told them that. Staffers shaved off pounds of the dog’s thickly matted fur before it could be treated

The Richmond SPCA determined that Lionheart’s thickly matted fur had been preventing the pooch from eating, drinking and even walking properly during that time.

‘I saw him when he first arrived, and I could not tell which was the front end and which was the back end,’ Richmond SPCA CEO Robin Starr told Today. ‘You couldn’t see anything. I am sure he was in great discomfort.’

Director of veterinary medical services for the SPCA, Dr. Angela Ivey, sad that staffers wouldn’t even have known that Lionheart as a poodle had his former owner not said so.

The shelter staff then shaved off pounds of Lionheart’s fur, which was said to have contained ‘a tremendous amount of fecal matter and bacteria,’ and clipped his nails, so that they could take stock of his condition.

That was when they discovered that he had sores on his skin, suffered from hookworm and had ‘terrible’ untreated periodontal disease. 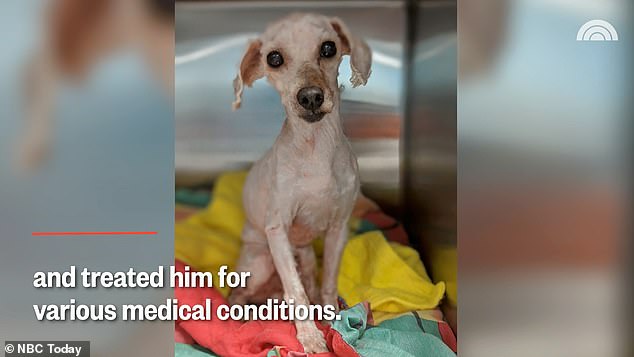 After shaving the dog down to its skin, staffers discovered sores on its skin and learned that it suffered from hookworm as well as ‘terrible’ periodontal disease 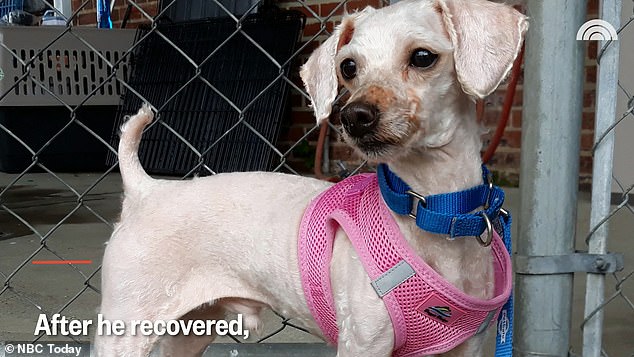 But after the dog woke up from anesthesia, staffers said the dog was ‘full of energy’ 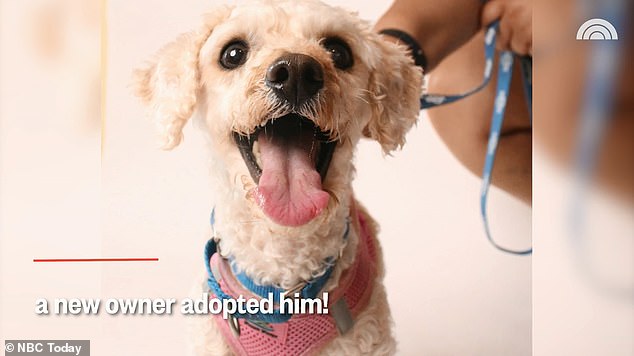 Three months after being dropped off, the dog was adopted by a couple that ‘just adores him’ 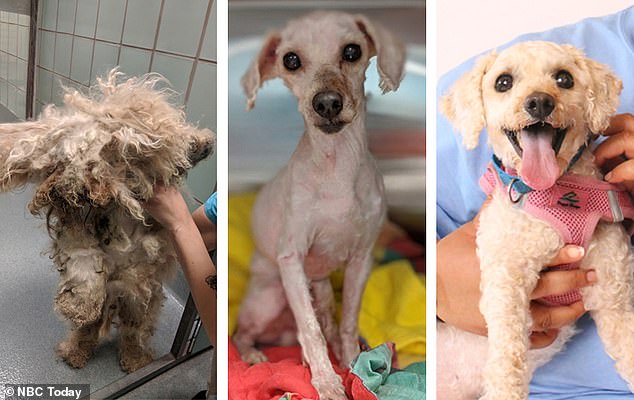 A look at the three stages of the poodle’s care at the Richmond SPCA. The dog as pictured when it first arrived (left), after being shaved (center) and prior to being adopted (right)

Lionheart was treated for all of his issues and also neutered at that time.

Ivey said that when Lionheart woke up from the general anesthesia he’d been put under for his treatment, he was like ‘a different dog’ and noted that it was ‘a miracle that he was trusting people to being with’ after being neglected for so long.

‘He almost immediately, when he woke up, was bouncy and happy and full of energy. I’m sure he had lots of pent-up energy after all that time,’ Starr added.

Starr said that after Lionheart was shaved down to his skin, they put him in a sweater to keep him warm.

After three months of being cared for, Lionheart was ready to be adopted by a couple that the Richmond SPCA knew was looking for a small dog.

The couple, who did not comment on the adoption, apparently renamed the poodle Cody.

Starr said that they take Cody with them everywhere they go and ‘just adore him,’ adding that the dog’s story is ‘the ultimate Cinderella story.’