Barcelona are still unbeaten. No one at the Sanchez Pizjuan was quite sure how but it definitely had something to do with Lionel Messi.

He was watching on the bench for the first hour – yawning occasionally as Barcelona fell two goals behind against Sevilla.

But he climbed off the bench with just under half and hour remaining and after Luis Suarez had flung himself at a loose ball two minutes from time to make it 2-1, Messi waved that magic wand left foot to level on 89 minutes. 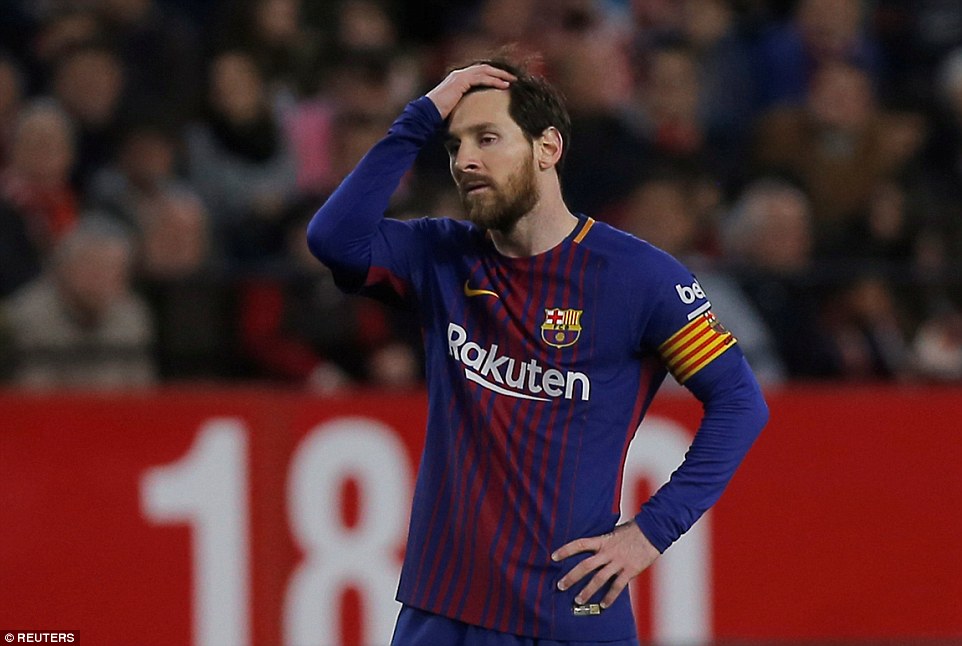 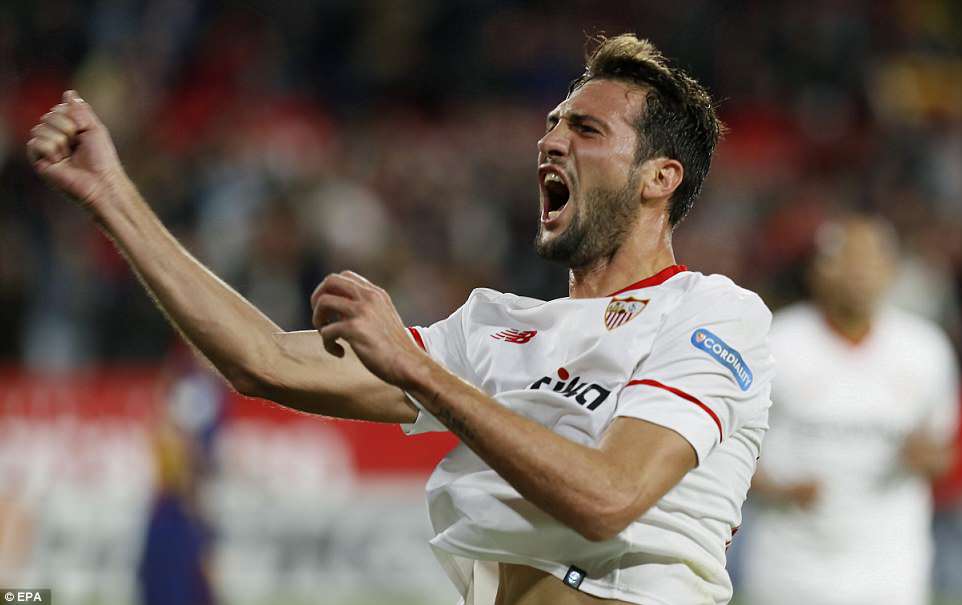 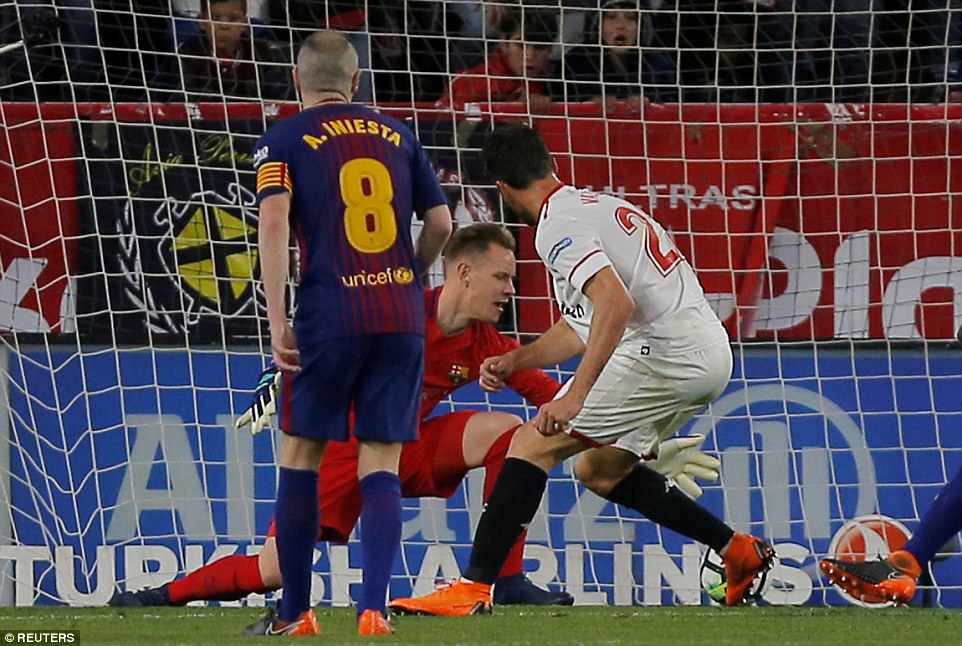 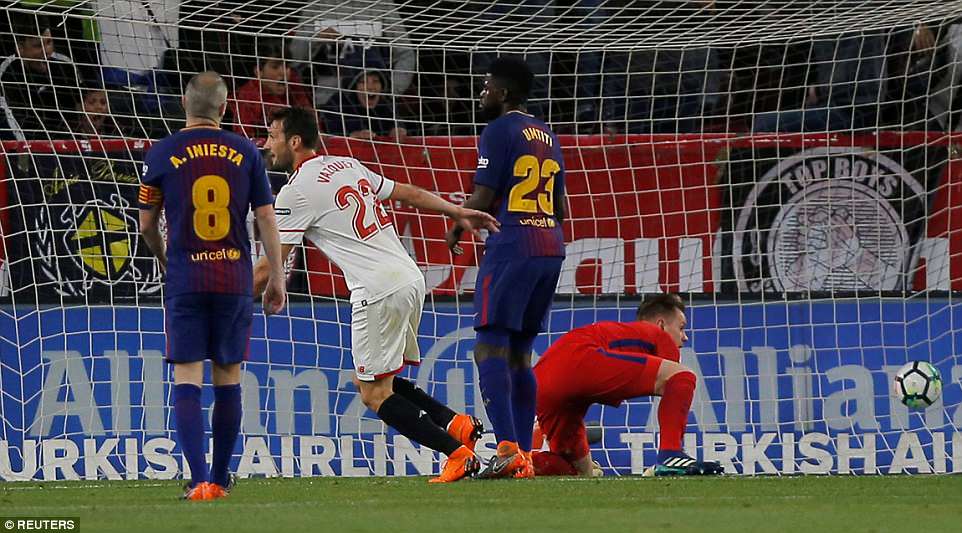 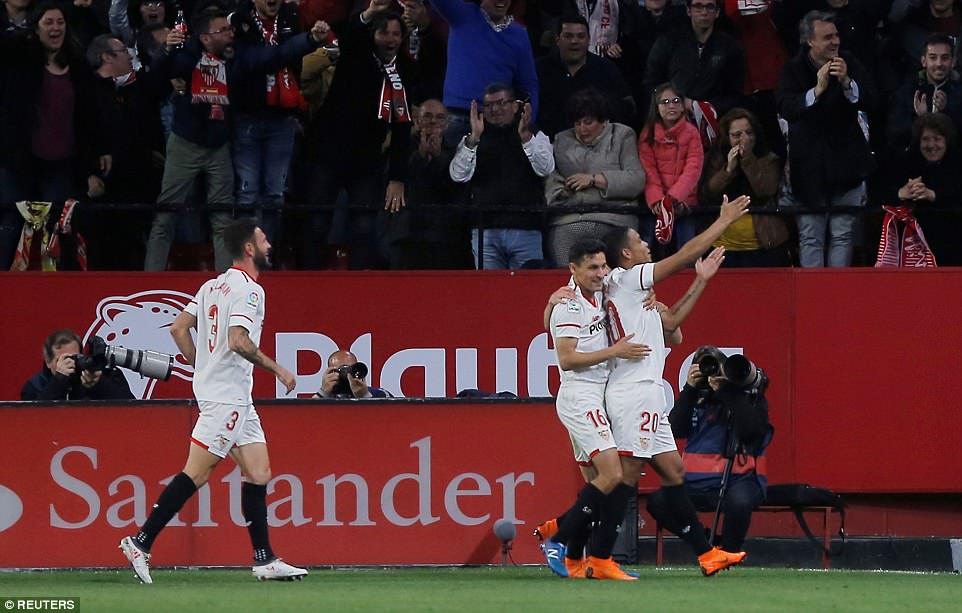 Barcelona were groggy for long periods but the Champion-in-waiting is still undefeated.

If Atletico Madrid beat Deportivo on Sunday then they will be nine points behind Barcelona with eight games left. The league is still very much on its way to the Camp Nou and after this late-late show Ernesto Valverde’s side could still finish the season without losing.

For long spells of this game the players that the Barca coach has most relied on all season – Gerard Pique, Samuel Umtiti, Ivan Rakitic and Suarez looked jaded. And those with the fewer miles on the clock – Ousmane Dembele and Philippe Coutinho – had not stepped-up to save their tired team-mates.

But the savior turned up just in time and with Messi’s late goal it was another point towards the title.

‘They were better than us but we showed a lot of pride,’ said Suarez on the final whistle.

The home side took the lead on 37 minutes. Jesus Navas started the move with a strong run down the right before sending a pass to Correa on the opposite wing. He was allowed plenty of time to swap passes with Sergio Escudero and roll a gentle cross into the six-yard box where the unmarked Franco Vaquez couldn’t believe the time afforded him by Pique and Umtiti. He steered his shot past Marc Andre ter Stegen and Sevilla were ahead.

It was more than they deserved after weathering the early storm from the league leaders. Suarez sent a shot just wide and Andres Iniesta blasted over after being gifted possession by a sloppy pass out from Sevilla keeper Sergio Rico. Coutinho then shot straight at Rico as the visitors continued to hold the upper hand. But with Messi now yawning on the Barca bench they were missing their chances and allowing Sevilla into the game. 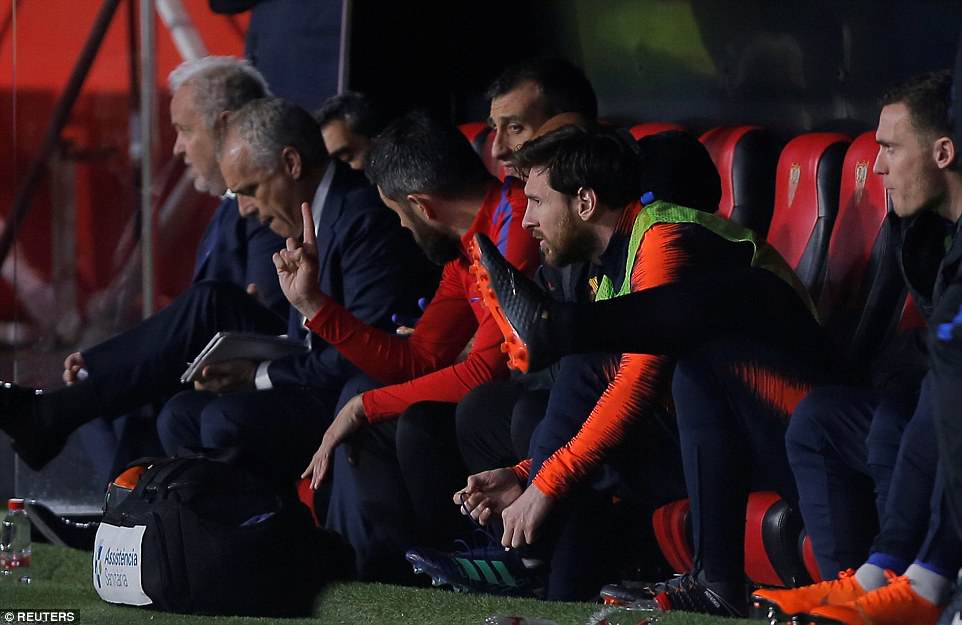 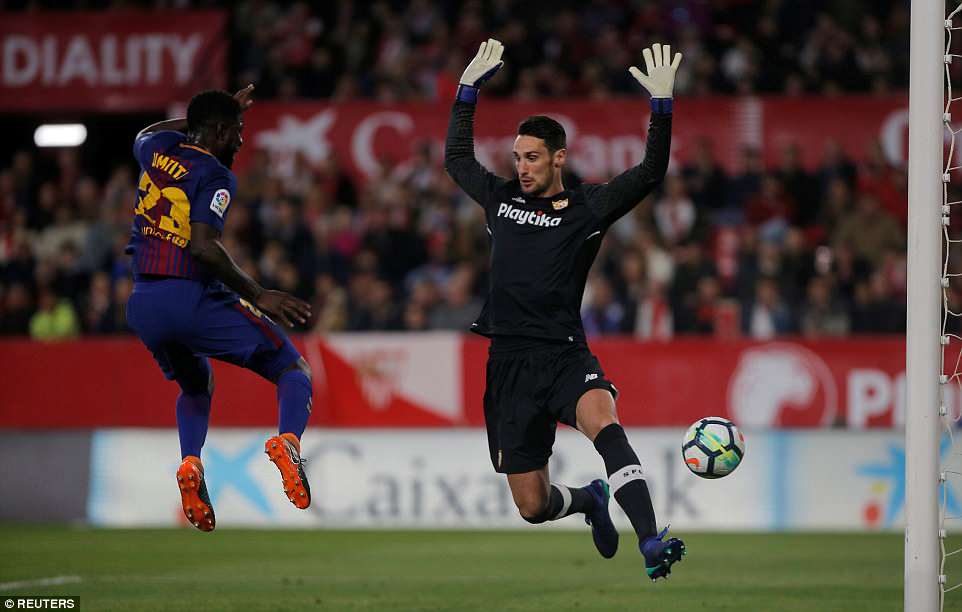 Sevilla should have gone ahead when Joaquin Correa found space in the area and connected with a Navas cross but he headed down and wide.

Barcelona were without Sergio Busquets in central midfield and his replacements Rakitic was deputizing having travelled to Miami and Mexico with Croatia during the international break. They were susceptible to the counter attack and it showed when they went behind eight minutes before the break.

They doubled their lead five minutes into the second half. Barcelona were asleep in their own penalty area again. Sevilla attacked down their right and when Pique failed to clear, the ball came out to Escudero.

His shot bounced off of Ter Stegen’s chest and ran straight to Luis Muriel who drilled his shot goalwards. It took a slight deflection off Umtiti’s toe before nestling in the corner.

Valverde’s dilemma now was whether or not to bring on Messi. On 57 minutes, and after Navas had gone close to making it 3-0 only for Pique to clear off the line, Barcelona’s number 10 made his entrance replacing Ousmane Dembele.

He immediately got Barça playing. He sent Jordi Alba down the left and when his cross ran to the back post Suarez thumped it into the post – the 40th time this season Barcelona have hit the frame of the goal.

With Barcelona still missing Busquets, Nzonzi for Sevilla was getting stronger with every passing minute. He cut out one pass from Suarez and sprinted to the edge of the Barcelona penalty area only to then not receive the final pass.

Messi’s initial impact seemed to have faded and Sevilla were closer to adding to their lead than conceding.

But three days before facing Roma in the Champions League Barcelona found something extra in the last two minutes. Suarez threw his body at a loose ball in the six-yard box to make it 2-1 and Messi did the rest from Coutinho’s pass. 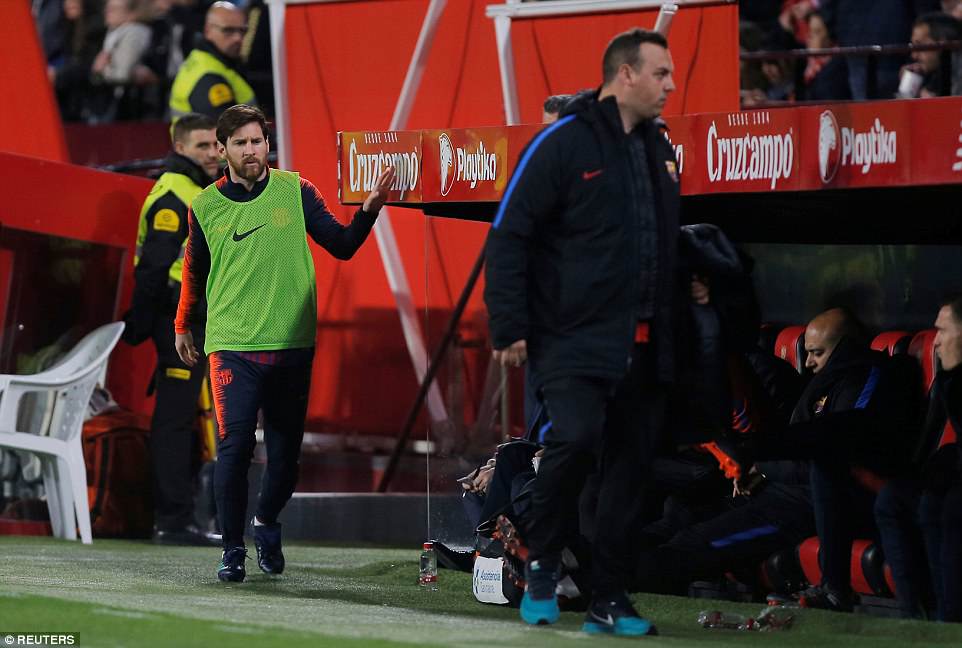 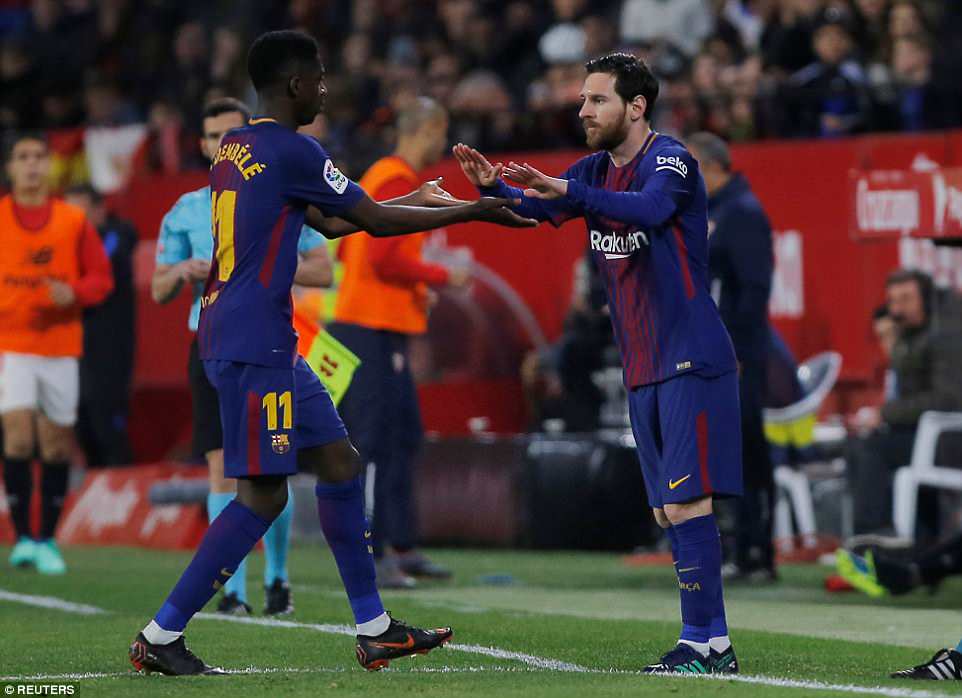