‘Sex attacker’ is beaten nearly to death after girl, 16, is gang-raped by three men in India

‘Sex attacker’ is beaten nearly to death after girl, 16, is gang-raped by three men in India

This is the moment a suspected sex attacker was beaten almost to death after allegedly helping to gang-rape a 16-year-old girl in India.

Mohammed Nazim, 20, was captured by angry villagers in southern Uttar Pradesh state where he was beaten with sticks, repeatedly kicked in the head and punched.

Nazim is accused of raping the 16-year-old alongside brothers Mohammed Chotka and Mohammed Badka while she went to get food for her livestock on Sunday.

The girl said she was walking to an orchard in a neighbouring village to fetch some fodder when the trio jumped her, NDTV reported.

She told police that the trio dragged her to a secluded area before taking it in turns to attack her.

A 39-year-old man has been burned to death by an angry mob after he was accused of raping a mentally disabled teenager in South Africa.

Police said the 17-year-old went to collect firewood with other women from her village when she was attacked in Limpopo province Monday.

Officers were called to the area Tuesday and found the man had been burned to death.

The rape was also recorded on mobile phone, with video of the assault shared widely after it had taken place.

Furious men from the girl’s home village managed to track down Nazim, who was surrounded in a paddy field.

Video shared online shows him in a ripped shirt being repeatedly hit over the head with large pieces of wood by a crowd of men.

He is also repeatedly punched and kicked before collapsing to the ground, where the beating continues.

He is now in police custody, having almost died from his wounds. Mohammed Chotka and Badka are currently on the run and being sought by police. 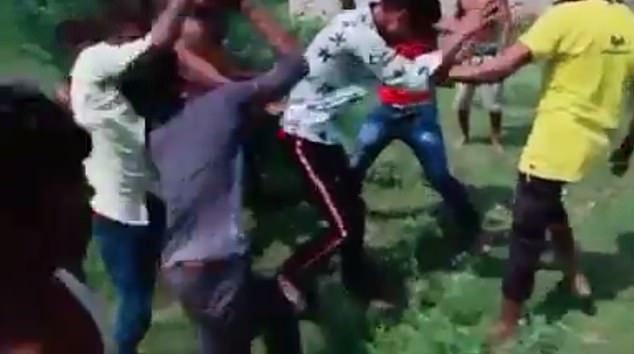 Two police officers have also been suspended after they reportedly refused to believe the girl and her family when they came to report the attack.

The officers are accused of refusing to open a case before accusing the girl of lying before investigations had been carried out.

Officers say a case is now open and the girl has been taken for medical evaluation.