Lack of intimacy can often lead to a relationship breakdown.

And unfortunately, sexual droughts can happen.

So what if you are stuck in a rut or struggling to secure a sexual partner?

Here, Sydney sexologist Dr Nikki Goldstein has revealed her top tips to survive a dry spell when you are in a relationship, marriage or single – and how you can bring the spark back into the bedroom – even if you’re alone.

Sydney sexologist Dr Nikki Goldstein revealed her tips to survive a dry spell when you are in a relationship, marriage or single

So what defines dry spells? Dr Goldstein explained how the time-frame varies for everyone.

‘Dry spells are different for everyone. It could be a few weeks for some while others say it’s six months or even years.

‘Everyone has different levels of sexual desires so it’s difficult to reveal [time frame]. It’s a dry spell when you say it’s a dry spell.’

‘If you’re not having sex, look at the importance of sex in your relationship,’ she said.

‘Take out sexual pleasures and orgasms, and look at what’s missing from your intimacy, it’s important to create that in a relationship rather than sex.

‘Bring back affection, touching and make sure you’re kissing everyday, every morning.  Whatever the reason is on why you’re going through a dry spell, it’s all about intimacy and it’s not always about sex.’

Dr Goldstein said it was important for couples to enjoy sex as much as they can – and frequency will naturally vary for different couples. 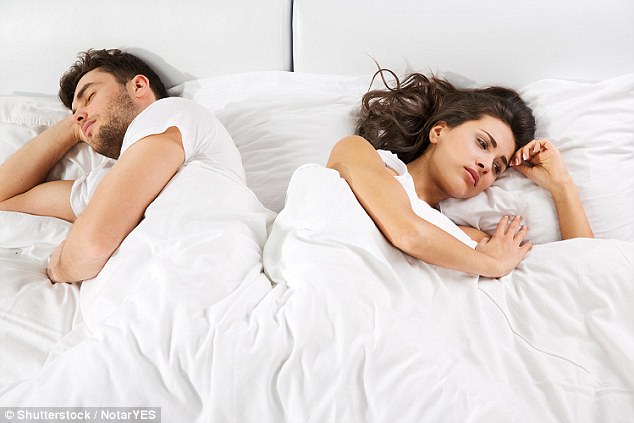 She explained there was no magic number of times per week the average couple should be aiming for to keep their partners happy in and out of bed.

‘Whatever works for them,’ she said.

‘As a society, we get so swept up with numbers. I get worried that couples are just having sex to feel normal because they saw the figures in an article or something.

‘Couples should be looking at the types of sex that works for their relationship not just having sex to keep the numbers up.

‘So when you’re not enjoying that type of sex, this could lead to boredom – and this comes in because you’re having sex for all the wrong reasons.’

She likened sex to children with toys.

‘It’s like a kid with a toy – they play with it a lot at the beginning. They love the toy and still keep it in a toy box but they are not playing with it as much as they first did.

‘So don’t freak – it’s not a matter of losing spark but it’s about changing the spark to something more satisfying.

‘If you want to continue the primal sex, you’re not thinking of what to explore such as fantasies – things that you can do in an intimate relationship so you can bond and get to know someone better.’

Dr Goldstein explained if there’s a sexual dry spell, there are three things to look at in your relationship that may be causing a lack of intimacy – emotions, lifestyle and boredom

Dr Goldstein explained if there’s a sexual dry spell, there are three things to look at in your marriage that may be causing a lack of intimacy.

‘Emotions, lifestyle and boredom,’ she said.

‘Look at your emotions in your relationship. Are you frustrated with each other? Are you both sweeping your problems under the rug? Are you pulling away from your partner?

‘For lifestyle, are you both busy? Tired and not sleeping? Do you have young kids or your work schedule is busy?

‘Have a conversation about what it is you want in the bedroom because no one is a mind reader.

‘Our sexual desires change overtime, so it’s important to to talk about what it is you want and get an update on the changes you both want in the bedroom.’

To rekindle the passion, Dr Goldstein said there are many things to look at before you jump to conclusion.

‘Spark is one of those terms that people freak out about. But if the spark is gone completely, don’t panic,’ she said.

‘Let’s look at marriages [or long-term relationships], you’re not going to maintain the same sparkiness from the beginning. Five years down the track, you might not be fulfilling the same sexual desire or you’re not having it as much.

‘But when you do have sex, your connection level is more satisfying in the long run than ripping off clothes type of sex.’

For couples who are lacking intimacy, Dr Goldstein said ‘just do it – take the Nike philosophy’.

‘It’s one of those things to getting back on the bandwagon. If things get so swept up, just have sex again – it feels good and nice to have sexual contact,’ she said.

‘Stop trying to look for more of a solution and just have sex again. Then when it does happen, have that conversation – and say you’ve noticed your partner feeling frustrated in the bedroom.’

For singles, how can you survive the sexual dry spell without lowering your standards?

‘You don’t have to have a partner to have sex. It’s a great opportunity to explore what you want. Have sex with yourself.

She explained single people having sex for the sake of breaking the drought leads to negative sexual behaviours – emotionally and psychologically.

‘He or she could be throwing themselves at you but it’s not healthy. If we can satisfy ourselves with self-pleasuring, than we’re safer in the single world.’