The woman who frantically rang doorbells at 3am in the morning looking for help was fleeing a convicted felon with a history of sexual assault, DailyMail.com can disclose.

Dennis Ray Collins – who shot himself to death after video of the woman went viral – was arrested in 2000 for attempted sexual assault, court records show.

He pleaded guilty to the second-degree felony and was given five years’ probation.

The woman, 32, was caught on camera ringing a bell in the suburban street in Montgomery, TX, raising fears for her safety.

But cops say she is safe and being consoled by her family having got in a car and driven to the Dallas-Fort Worth area after failing to get help last Friday.

The woman said the shackles were ‘restraints commonly used in private intimate encounters,’ said Spencer during a press conference in Conroe, Texas.

Had Collins, 49, lived he would now be facing more serious charges, cops in Texas say.

‘If he were still alive this would be a criminal investigation,’ Lt. Scott Spencer of the Montgomery County Sheriff’s Department said Thursday afternoon.

‘There are separate incidents but rolled into one there would be kidnapping and unlawful restraint rolled into sexual assault, so this could be a multifaceted investigation.’

Crime scene: The man shot himself at this house on the 18400 block of Sunrise Pines Drive at 11 am. He was 49 and the live-in-boyfriend of the 32-year-old woman caught on camera frantically ringing doorbells in a road nearby at 3am last Friday 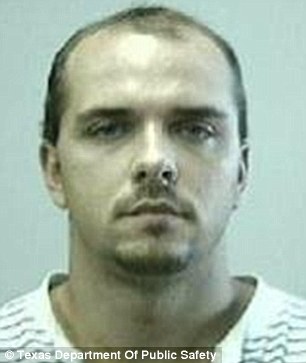 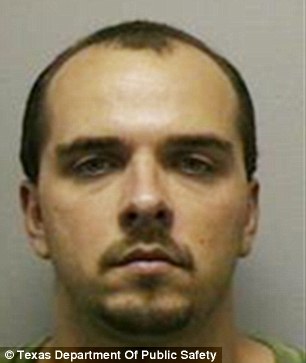 Just a street away: How the mystery of where the woman came from was solved 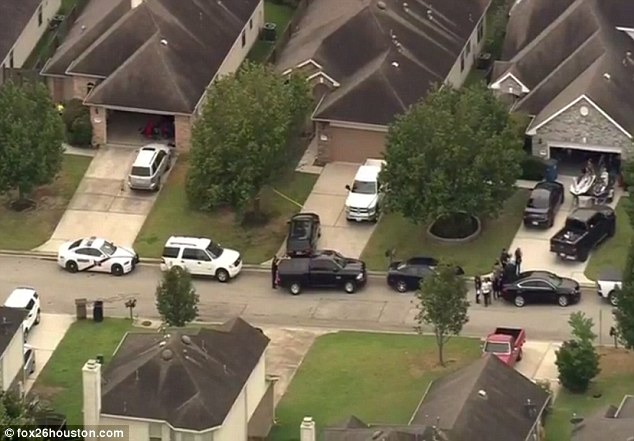 Grim ending: Law enforcement surrounded the house where the 49-year-old man took his own life Wednesday, and said his girlfriend was safe and being ‘consoled by her family’

The video, recorded on a security camera early on Saturday morning, showed the 32-year-old woman desperately ringing on a doorbell in the Sunrise Ranch subdivision in Montgomery, Texas.

Homeowner Jennie Drude shared the video online and with police.

Collins’s ex-wife called cops were called to Collins’s rented house, just one street away from Drude’s home, on Wednesday morning. The ex recognized the woman on the video.

‘She was adamant it was the girlfriend in the video,’ said Spencer. ‘She had met her before.’

The ex was worried because Collins had texted her threatening suicide. Spencer said it was clear that he was upset by the video that had circulated widely on the Internet.

In a suicide note Collins ‘admitted he did what he did to her that was seen in the video,’ he added.

Cops met the ex at Collins’s three-bedroom, single-story home on Sunrise Pines Drive. They had to force their way in and found Collins dead in a back bedroom with a single gunshot wound to his chest. A handgun was found nearby.

Investigators are refusing to identify the woman, who in the video was dressed in only a shirt with no pants or shoes, and with broken shackles on both wrists, as she is said to be the victim of sexual assault. They say she is now with family in the Dallas area.

‘She is very distraught about this,’ Spencer said. ‘She is embarrassed, upset and in shock that it has come to this.

‘We are giving her her time and staying in communication with her.’

Spencer said Collins and his girlfriend had been renting the home for four months. ‘Residents didn’t recognize her as they hadn’t been there that long.’

The woman broke free from Collins’s restraints early on Saturday. After ringing doorbells at two houses she returned home, got in a car and drove off to Dallas,’ Spencer said.

‘What exactly occurred up to then I don’t know, but her allegations of sexual assault are being taken seriously and are being investigated right now.

‘She was in distress,’ he added.

Spencer said his department had been inundated with leads from around the world since the video went viral. 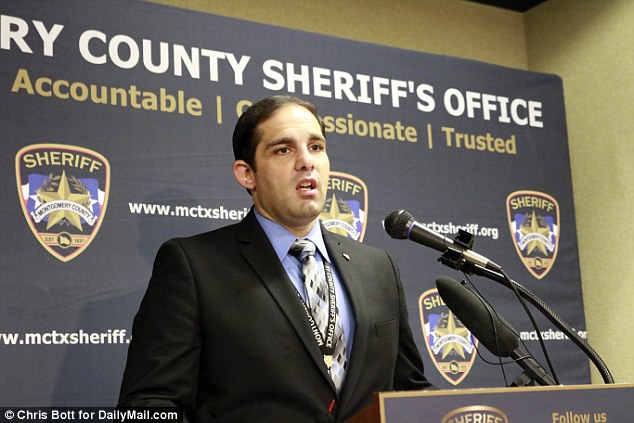 ‘If he were still alive this would be a criminal investigation,’ Lt. Scott Spencer of the Montgomery County Sheriff’s Department said Thursday afternoon. 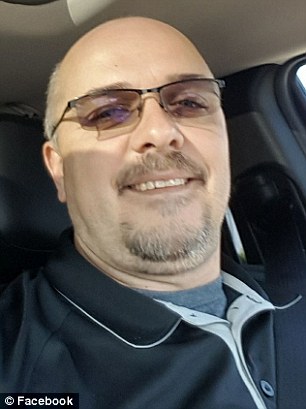 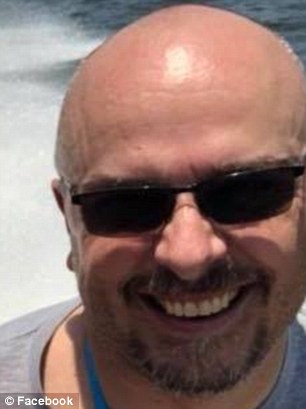 Sex offender: Dennis Ray Collins had been off probation since 2005 for his conviction for sex assault, 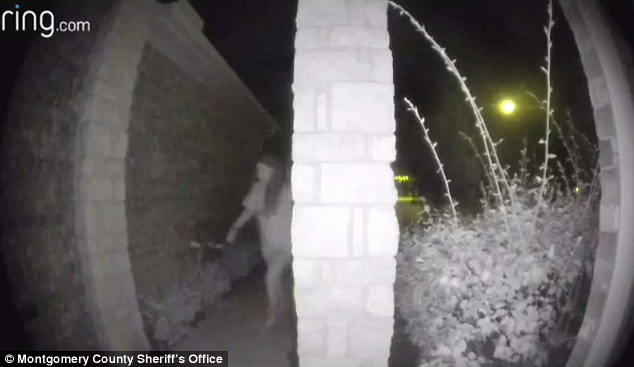 The woman is seen on a resident’s security camera, around 3am Friday approaching the door with no pants or shoes on. She has now been found safe. 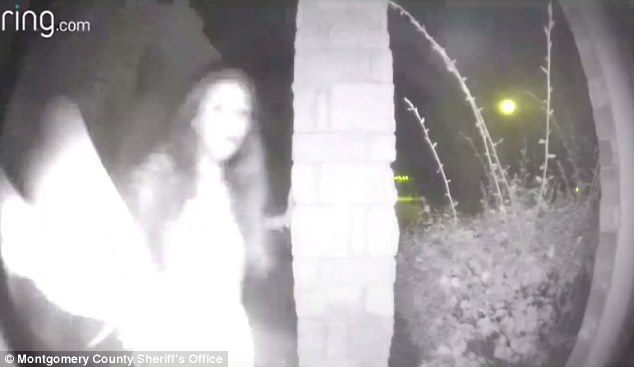 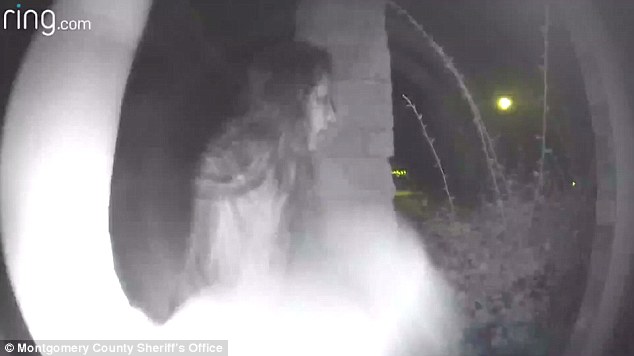 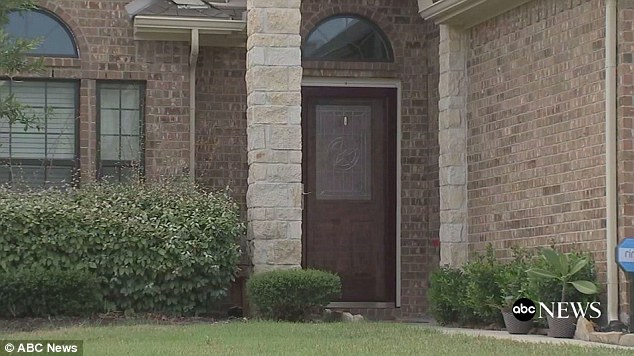 ‘We received numerous calls — I couldn’t give you a number but it was a lot —referring to missing persons, not just locally but throughout the United States and also internationally. 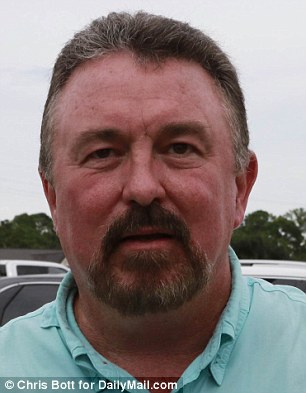 John Bradley, a neighbor who lives on the estate, told DailyMail.com a white van that was parked in the drive of the dead man’s house, was similar to one that was being driven around the development in the early hours when the woman was ringing bells trying to get attention.

‘Detectives were in contact with each of those law enforcement agencies to find out similarities,’ he added.

In the 7-second video, the woman is seen emerging from behind a bush, she seems to be trying to be quiet, and she reaches for the doorbell.

She also tried to get attention from another house but by the time residents responded she was already gone.

Restraints are on her wrists. Drude described the woman as appearing to be out of breath from what she could see on her home’s surveillance video.

Police canvassed the area and went door-to-door to speak with residents but none recognized the woman from the video. They are also reviewing other security footage from the area.