Shailene Woodley curls up on the beach with fiance Aaron Rodgers

Shailene Woodley and Aaron Rodgers enjoyed a relaxing evening watching the sunset on the beaches of Malibu on Wednesday.

The engaged couple were spotted curled up on the sand beside Shailene’s dutiful German Shepard dog.

Despite being dressed down in jeans and a white sweatshirt, Shailene, 29, did dress up the look with one dazzling accessory – her jaw-dropping diamond engagement ring from Aaron, 37.

Making waves: Shailene Woodley and Aaron Rodgers enjoyed a relaxing evening watching the sunset on the beaches of Malibu on Wednesday

The bling sparkled in the sunshine as Shailene strolled barefoot on the sand with a water bottle in hand.

The couple were the picture of happiness as they enjoyed a break from their fast-paced lifestyles to watch the rolling waves.

Like his leading lady, Aaron was casually dressed in jeans, a black sweatshirt, and matching cap.

The football icon grinned from ear-to-ear as he gazed towards the ocean blue beside his beaming fiance. 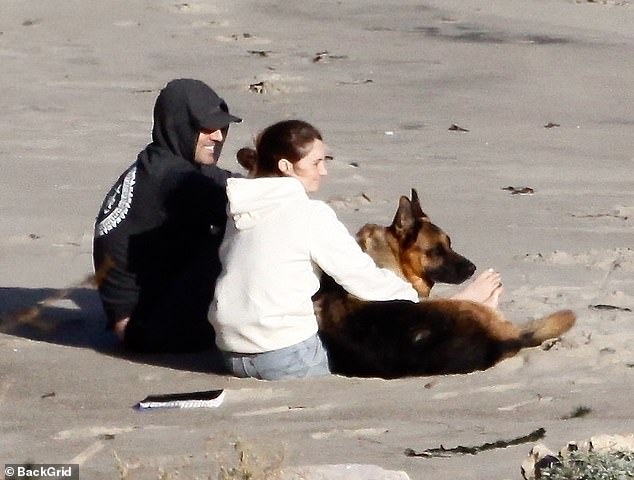 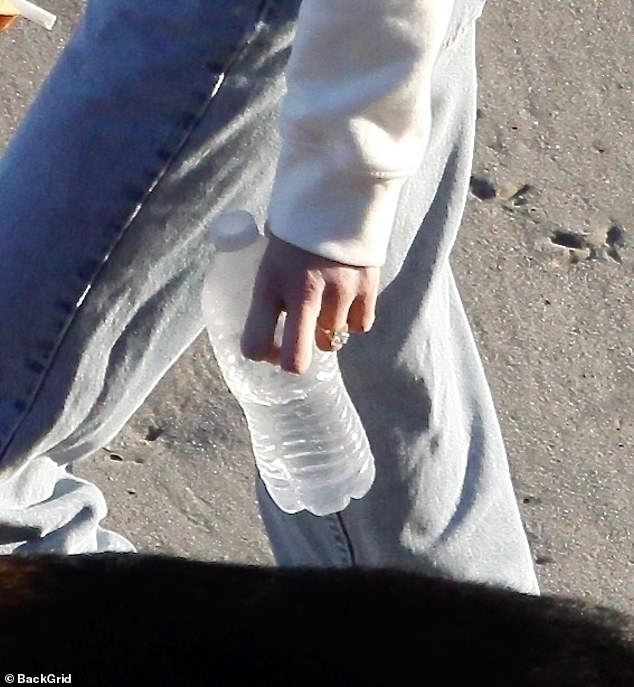 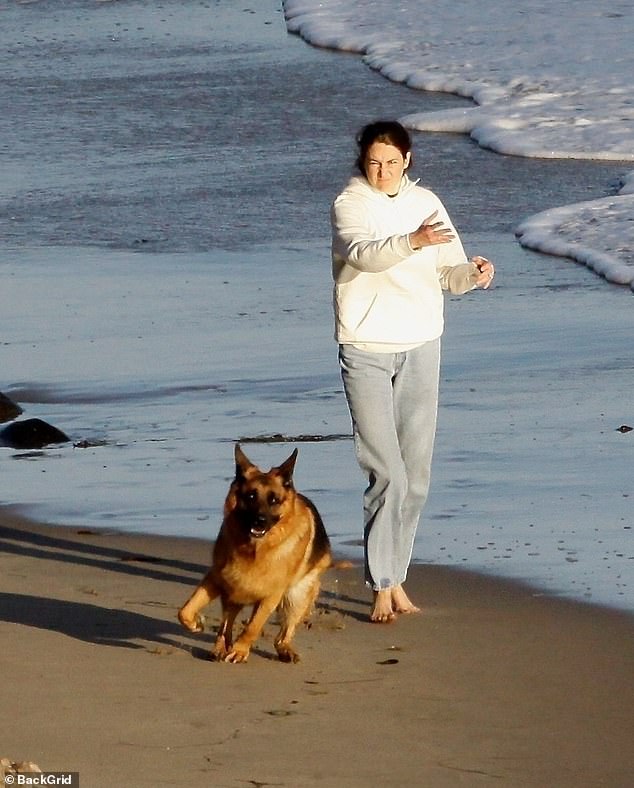 Man’s best friend! Shailene appeared to be playing fetch with her rambunctious dog 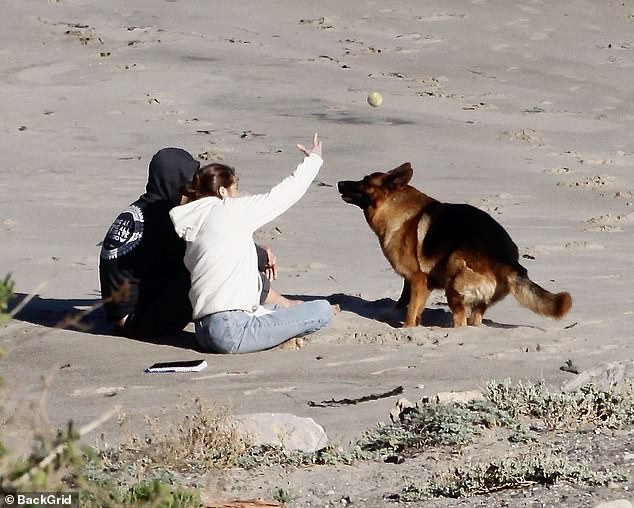 Having a ball! Shailene tossed the tennis ball into the air for her four-legged friend to capture

Shailene lavished extra TLC on her furry friend, pulling him into her arms for a hug and playing fetch with him.

The actress also enjoyed a quiet moment of journaling with her pooch sitting by her side.

Shailene appeared to be self-reflecting as she rifled through the pages of her notebook.

At one point she laid down upon the sand with her hoodie over her head, basking in the spring sunshine. 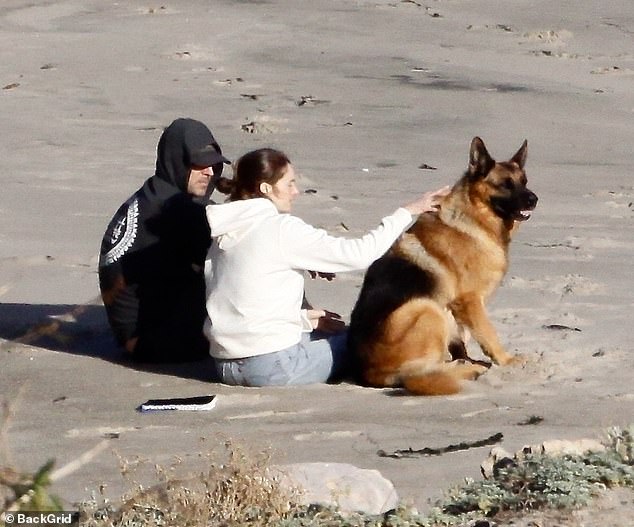 Easy does it: Woodley tenderly petted her dog 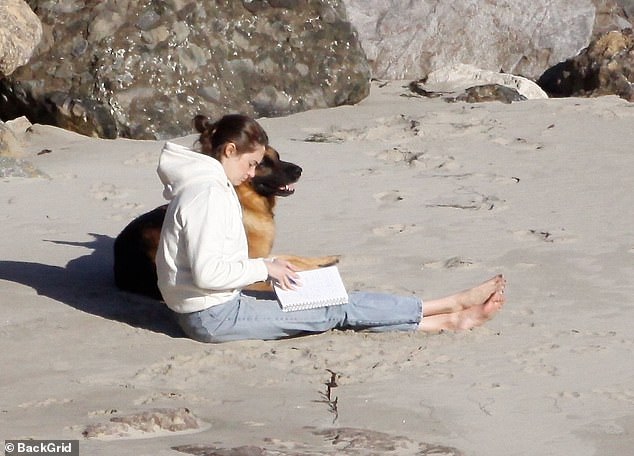 Self-reflection: The Fault In Our Stars actress appeared to be doing a bit of journaling 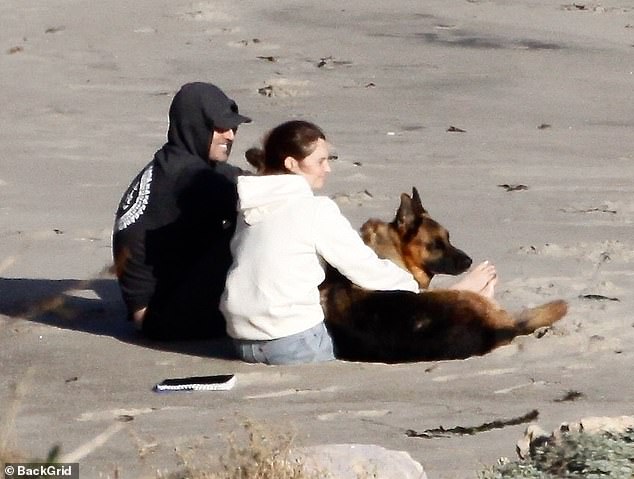 Making waves: The engaged couple smiled as they watched the rolling waves 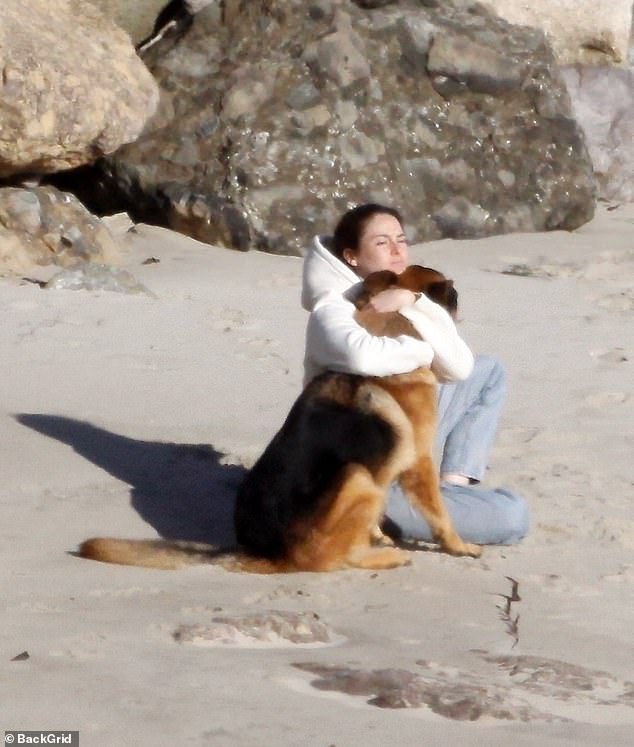 Aww! Shailene pulled her pooch in for a fierce hug

It’s been over a month since Shailene confirmed her engagement to Aaron, after the football player shocked the world thanking his unidentified ‘fiancee’ in an MVP acceptance speech.

Shortly afterwards, People reported that the lucky lady was Shailene, who subsequently confirmed the betrothal during an appearance on The Tonight Show Starring Jimmy Fallon.

‘Yes, we are engaged. But for us, it’s not new news. Everybody right now is freaking out over it, but we’re like, ”Oh, we’ve been engaged for a while.”‘ 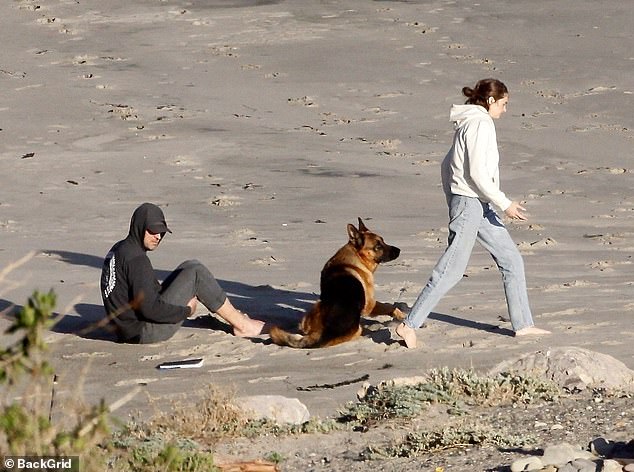 Walk this way: The actress strolled barefoot on the sand as her love remained behind

Don’t sweat it! The 29-year-old kept it casual in white sweats and jeans 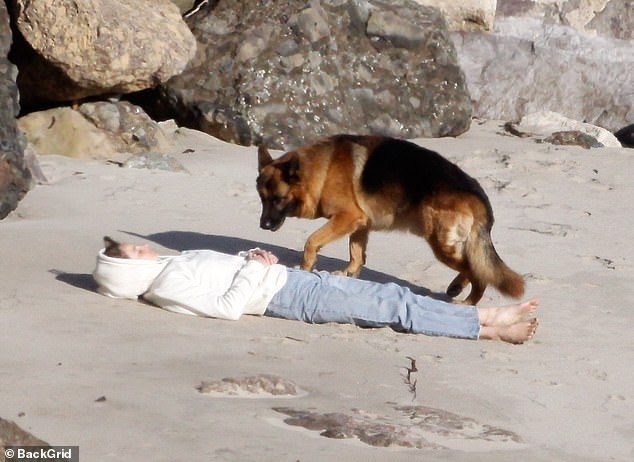 Laying out: Shailene basked in the sunshine wearing her hoodie

‘Yeah, we got engaged a while ago and he’s first off a wonderful, incredible human being. But I never thought I’d be engaged with somebody who threw balls for a living…’

‘Like, I never thought as a little girl, I was like, ‘Yeah, when I grow up, I’m gonna marry someone who throws balls! Yeah!’ But he’s really just so good at it’.

The Fault In Our Stars actress playfully revealed that the Green Bay Packers quarterback received a ringing endorsement from her dog.

She said: ‘When I first met him, I think my dog like pulled me aside and was like, ”If you don’t date this dude, I will disown you as my mother… 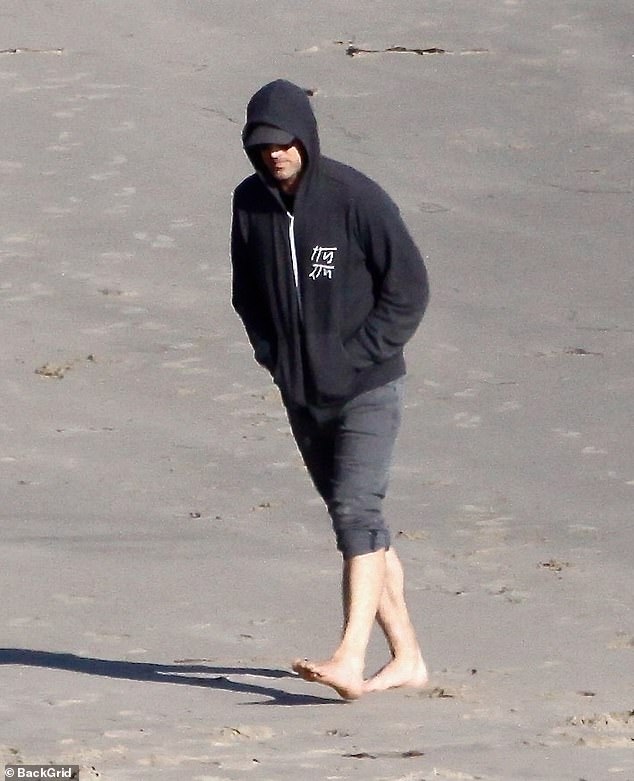 Hitting his stride: Rodgers stayed warm in his zip-up jacket and rolled up jeans 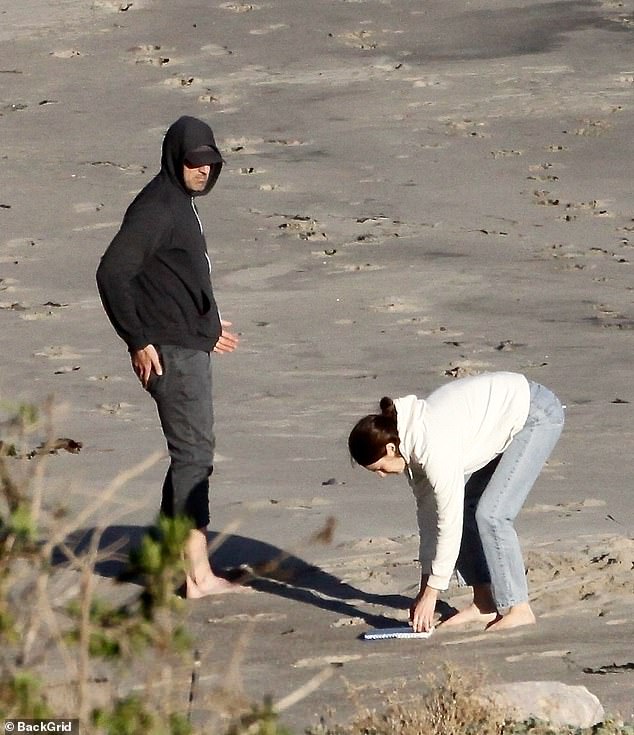 She said yes! It’s been over a month since Shailene confirmed her engagement to Aaron, after the football player shocked the world thanking his unidentified ‘fiancee’ in an MVP acceptance speech