NEW ORLEANS (AP) – Tens of thousands of people gathered Saturday for the second day of the New Orleans Jazz & Heritage Festival, listening to an eclectic medley of music from big-name headliners like Rod Stewart to boot-stomping south Louisiana bands. It was also a day of remembrance for some of the musical talents the city has recently lost. Here’s a look at some of the festival’s highlights:

Some guys have all the luck indeed. Rod Stewart closed out the main stage at the New Orleans Jazz & Heritage Festival on Saturday, singing a medley of his hit songs. Stewart seemed to thoroughly enjoy himself, playfully chatting with the crowd and frequently calling on them to sing along to such hits as “Forever Young” and “Some Guys Have All the Luck.”

A jazz funeral to honor Fats Domino makes its way through the crowd at Jazz Fest 2018 in New Orleans on Saturday, April 28, 2018. (Brett Duke/NOLA.com The Times-Picayune via AP)

“Singing is good for the heart, the soul and the lungs,” he told the crowd.

He was backed up by a high-energy assortment of musicians and singers. The “Forever Young” performance featured three drummers on stage going head-to-head followed by women in kilts playing the fiddle.

New Orleans lost one of its most famous artists last year: Fats Domino. They decided to send him off in style during the festival.

Organizers marked the occasion with a jazz funeral and a special tribute performance. Al ‘Lil Fats’ Jackson played the classic Domino song “Blueberry Hill” as crowds gathered at the festival’s ancestor area to see a painting of Domino sitting at his piano unveiled. The ancestor area is where luminaries associated with the festival who have passed away are remembered.

One of Domino’s grandchildren, Angele Green, thanked the crowd for coming: “In the words of my grandfather, let’s shake, rattle and roll,” she said.

Domino sold more than 110 million records. Despite his fame, he always stayed loyal to New Orleans.

Eather Reynolds of New Orleans said she often drives by the house where Domino lived for a long time in the city’s Lower 9th Ward neighborhood. She grew up listening to his music that she described as part gospel and part jazz: “But you could feel it in your soul.”

Jon Batiste, the band leader for The Late Show with Stephen Colbert, Bonnie Raitt and Irma Thomas later took the stage for a heartfelt tribute to Domino. Batiste, alternating between the piano and his trademark melodica, performed such hits as “Ain’t That a Shame.” Raitt told the crowd that she was dedicating her song Domino and to Charles Neville, a member of The Neville Brothers band who died Thursday. She then launched into a rousing performance of “All By Myself.”

Don’t’ stay home from the jazz festival just because you have kids. That’s the message from Bridget Truxillo, a Houston mom of three who got up at 4:30 in the morning Friday to drive to New Orleans for the festival. Children – often wearing large headphones to protect their growing ears from loud music or fast asleep in strollers – are a big part of the festival experience. There’s a Kids Tent with music just for them and a special tent featuring circus performers and face-painting. Parents often camp out just outside the various tents with their kids, where the music isn’t so loud.

Truxillo said she wants her children to experience all the food and music of the festival. She recommended parents find a shady spot when possible and go with the flow: “Try it. Kids adjust to anything.”

From Emma Fick’s perch in one of the art markets she could hear the sound of the “Pine Leaf Boys” coming from the Fais Do Do stage. Not a bad day for her first experience selling her artwork at the festival. The New Orleans resident was showing her watercolor paintings that fused folklore images from her world travels with flora and fauna from Louisiana. Artists apply to be able to show their work: “It’s incredibly exciting to just get in.” 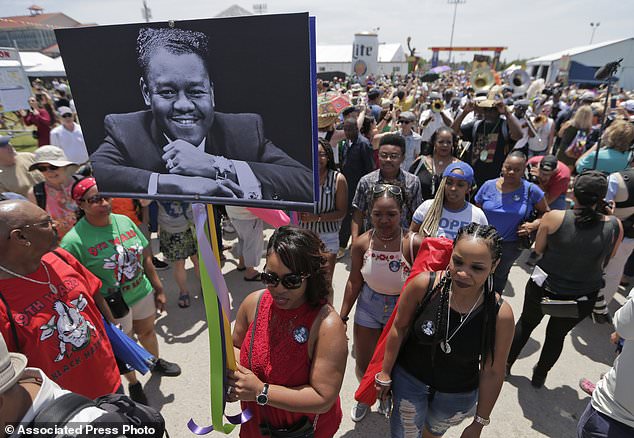 A jazz funeral to honor Fats Domino makes its way through the crowd at Jazz Fest 2018 in New Orleans on Saturday, April 28, 2018.(Brett Duke/NOLA.com The Times-Picayune via AP) 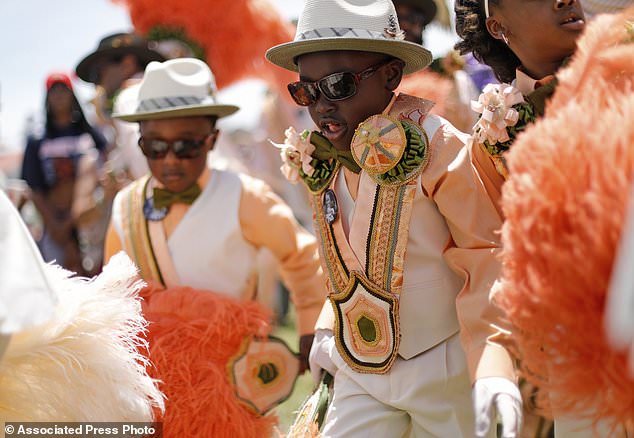 A jazz funeral to honor Fats Domino makes its way through the crowd at Jazz Fest 2018 in New Orleans on Saturday, April 28, 2018. (Brett Duke/NOLA.com The Times-Picayune via AP) 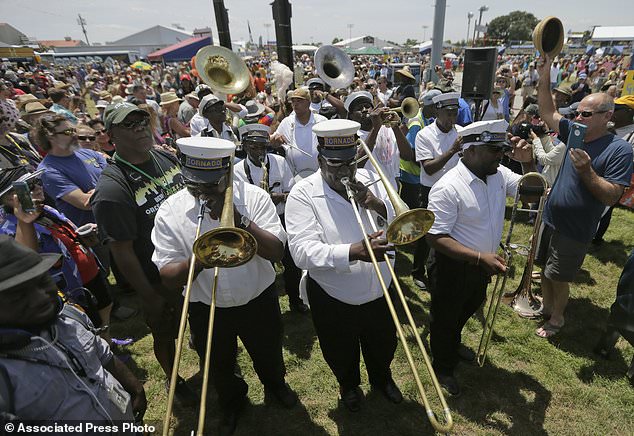 The Tornado Brass Band plays during a jazz funeral to honor Fats Domino makes its way through the crowd at Jazz Fest 2018 in New Orleans on Saturday, April 28, 2018. (Brett Duke/NOLA.com The Times-Picayune via AP)