Only when the dark nights have been and gone and this tournament reaches its late stages, will we find out whether Pep Guardiola has what it takes to resolve the frailties at the back of his team. Until then, the supreme attacking forces he has assembled will have ample chance to shine as they did on Wednesday night.

The lowlands of the Champions League group stage look so benign for Manchester City that a cold night in the eastern Ukraine maybe as tough as it gets this side of Christmas. Guardiola’s side should have scored five times last night and emerged unscathed, despite a few scares in the makeshift rearguard which was the source of such pre match-angst.

The offensive side of City has somehow been forgotten amid the defensive setbacks of the past six days, though here was further evidence of a new attacking dimension, too. Riyadh Mahrez, the outstanding performer, has emerged from a mixed first season to become one of City’s prime attacking threats in the early weeks of this campaign. 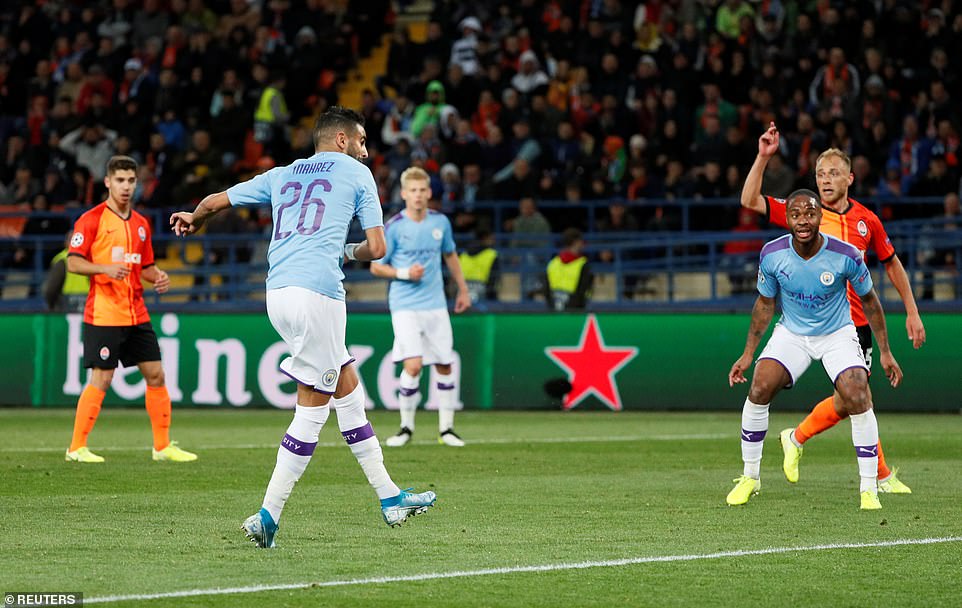 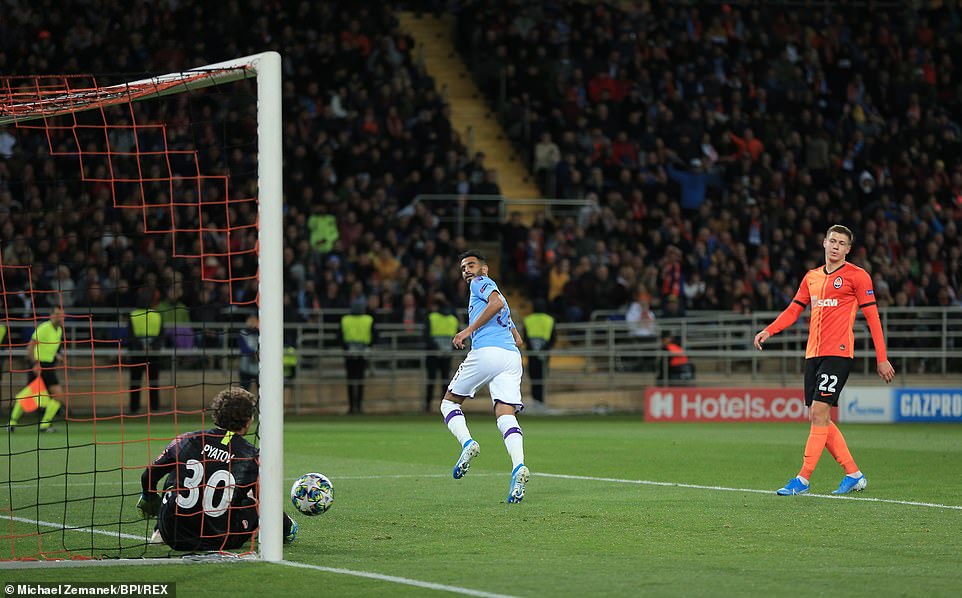 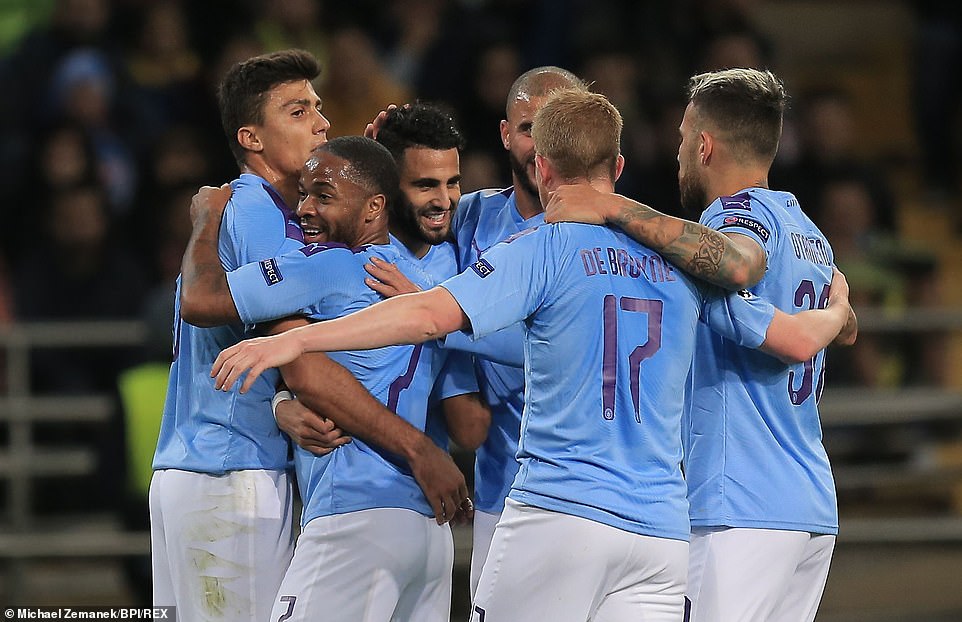 Guardiola was subdued and difficult to hear, despite a second microphone being stuck in front of him, when he sat down to talk on Tuesday night. John Stones’ freak training injury, leaving the manager with only one specialist centre half, was still sinking in and the timing was unfortunate as City prepared to launch their ninth Champions League challenge of their Abu Dhabi era.

It is the tournament which, for all their domestic supremacy, City have never remotely threatened to win. Their closest crack – that crushing anti-climactic Real Madrid semi-final, which Manuel Pellegrini’s team seemed resigned to, four years ago – came 12 months after chairman Khaldoon Al Mubarak had declared that the club were embarking on a ‘new phase.’

He seemed to be saying that the Abu Dhabis were looking City to convert their vast investment in players into Champions League success which they require if they are to enter the ranks of the continent’s super-clubs. City have spent more than £500m since Al Mubarak spoke that day, taking their spending on players to around £1 billion. The Abu Dhabis will not want to wait much longer.

The club’s surprisingly poor record in the tournament’s opening fixture in the last eight years – won 3, drawn 1, lost 4 – reflects what a struggle it has been. The surprisingly small contingent of away fans last night – barely 100 – also bore out the sense that there is not the same fascination and obsession with the competition that Liverpool and Manchester United hold.

Though it was a cakewalk in this stadium for Guardiola’s players last year, there was also a renewed spirit last night about the side built out of this great nation’s vast industrial heartlands, whose orange and black shirts were designed to capture the look of local coal miners as they emerged from the collieries of Donetsk.

Shakhtar are the tournament’s team-in-exile – forced by the de facto Russian occupation of Donetsk to train in Kiev and make an hour’s flight here to play their home games. They demonstrated the renegade spirit at times in a first half during which City had some digging to do.

The home side looked the more compact for the two for the first 20 minutes; much more solid and incisive than in last season’s 3-0 defeat. Though the focus was on Fernandinho – Guardiola’s emergency centre half – the early pressure was on Kyle Walker, fighting for his own sustained place in the team, who struggled at times against the Egyptian Ismaily. And Rodri, seeking to protect the makeshift defence, who was vulnerable, too. The Spaniard was booked for an illegal attempt to stop Ismaily’s advances and nutmegged by the Brazilian captain, Taison, who laid on an outstanding chance which forward Junior Moraaes, sent in on Ederson, could not finish.

But though City’s possession and passing was less polished than customary, the champion attacking quality in the side quickly prevailed. There was class – and a significant Mahrez component – about both of the first half goals.

It was he who pounced on the loose ball half way through the opening period after Gabriel Jesus’ intelligent ball in to Ilkay Gundogan’s presaged a shot from the German which hit the post and rebounded out.

And Mahrez was the deliverer, where the second goal was concerned – fastening magisterially onto a 20-yard diagonal pass from Rodri, driving powerfully into the right hand side of the home side’s box and laying a reverse pass into the space towards which Gundogan accelerated for a clinical finish.

City’s high defensive line did look exploitable at times and a better equipped side than Shakhtar could have got in behind it. A lack of communication at the back between Ederson and Fernadinho saw the goalkeeper advance off his line for a ball which Moraes reached first – lobbing weakly.

But City always looked more likely to score again. An unmarked De Bruyne missed a clear-cut chance from the right, where he found the side netting before the break. Gundogan powered through the middle and shot weakly at Andriy Pyatov. A hashed clearance saw the ball played straight to Raheem Sterling, who hit the post.

Jesus finished things on 76 minutes. De Bruyne broke from midfield and slipped in the Brazilian, who advanced 20 yards to score. Early days, of course, but this was a statement of intent. 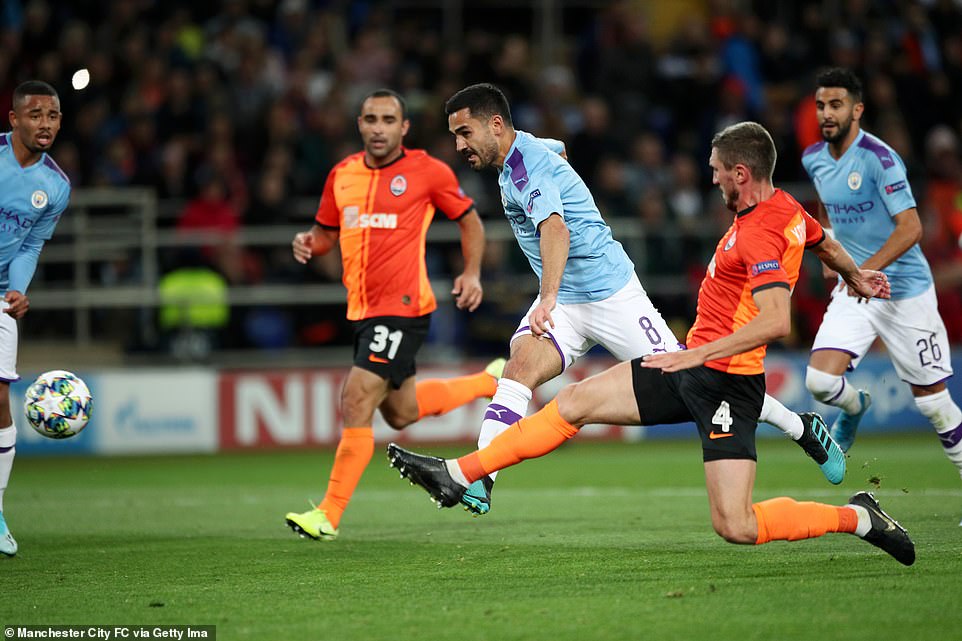 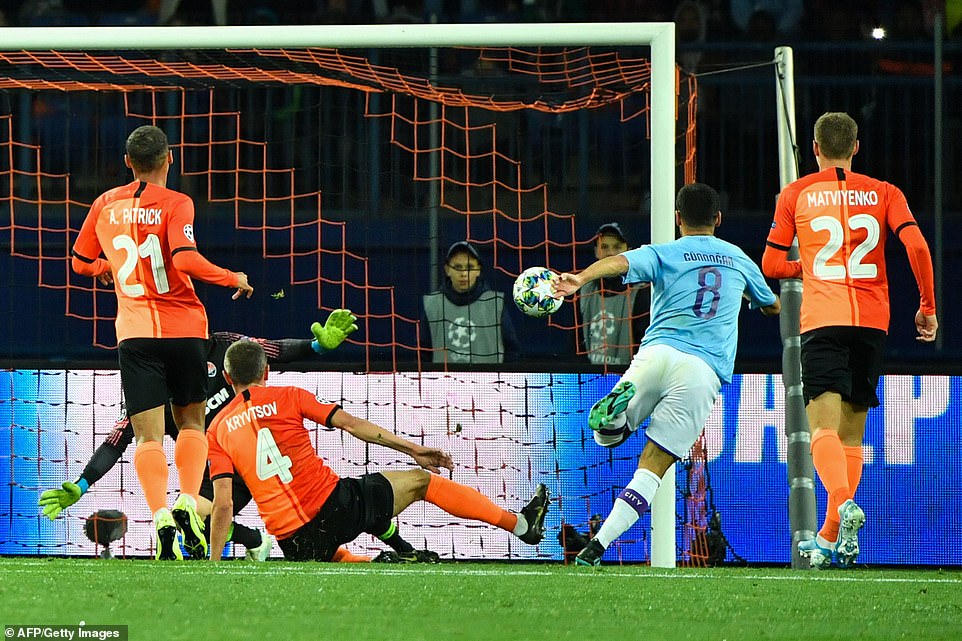 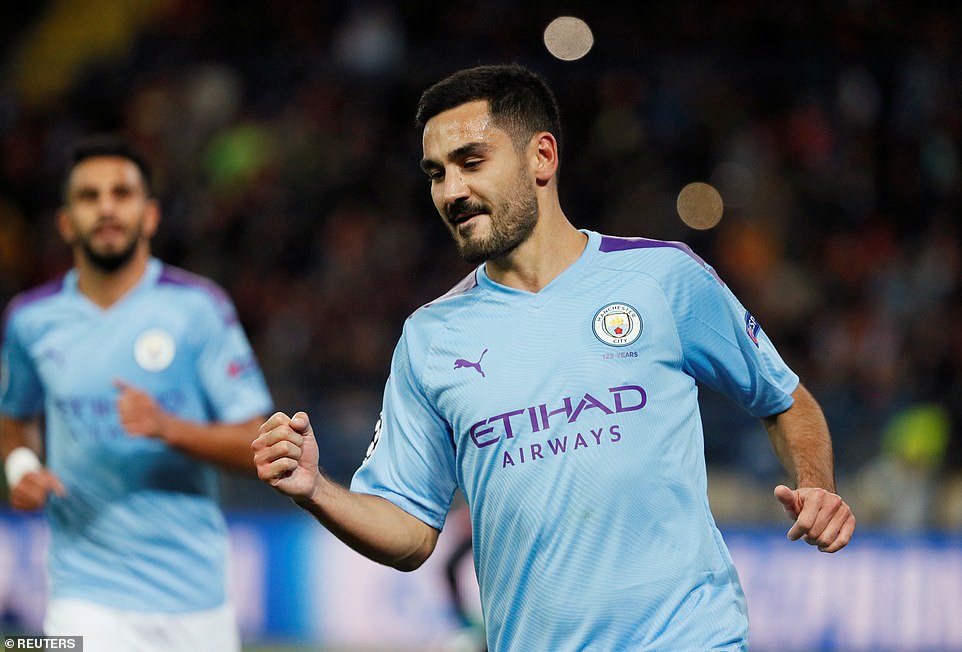 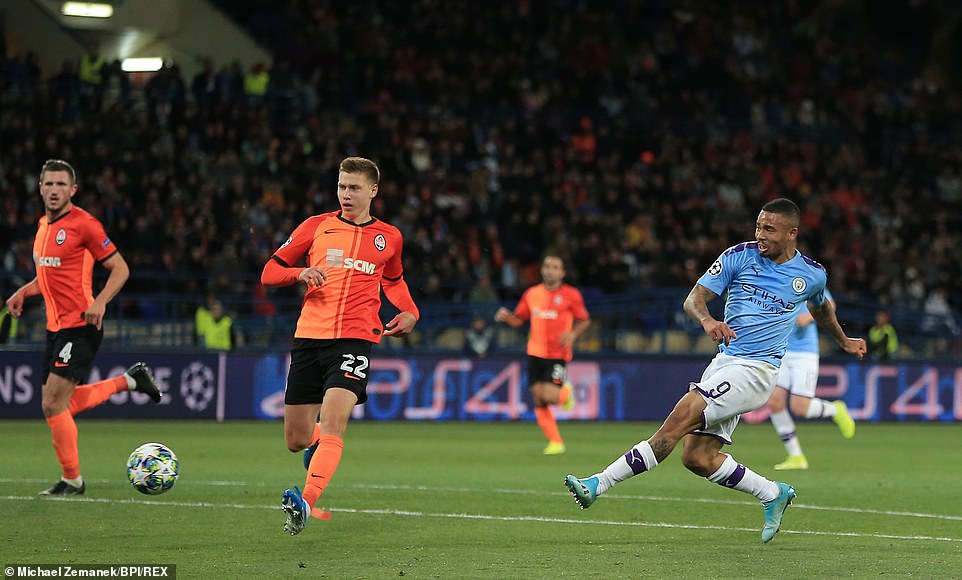 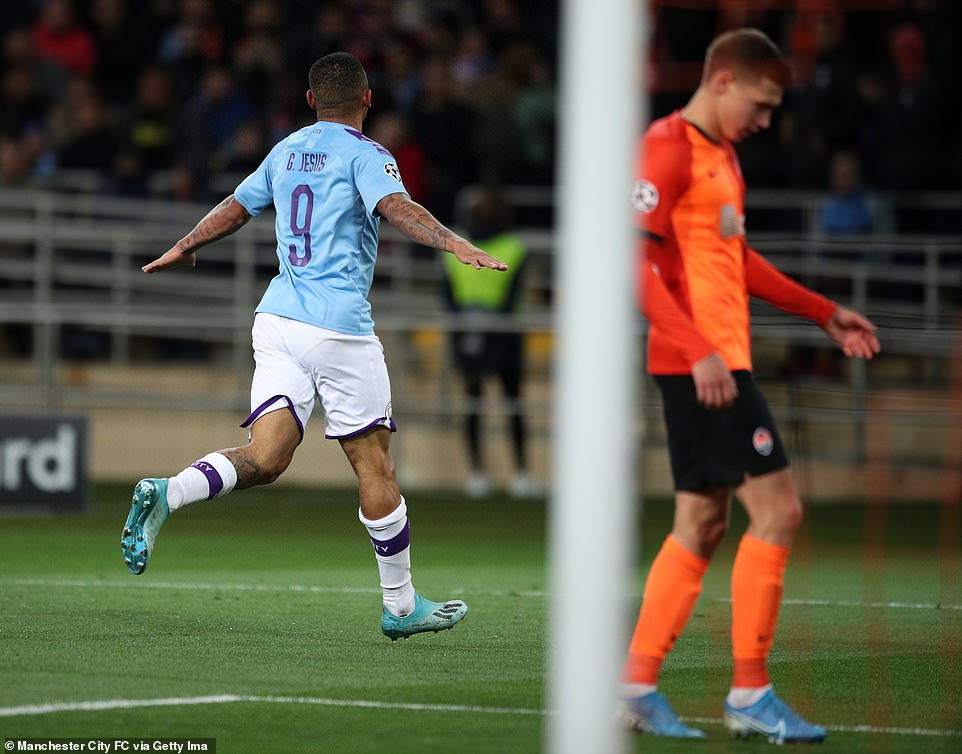 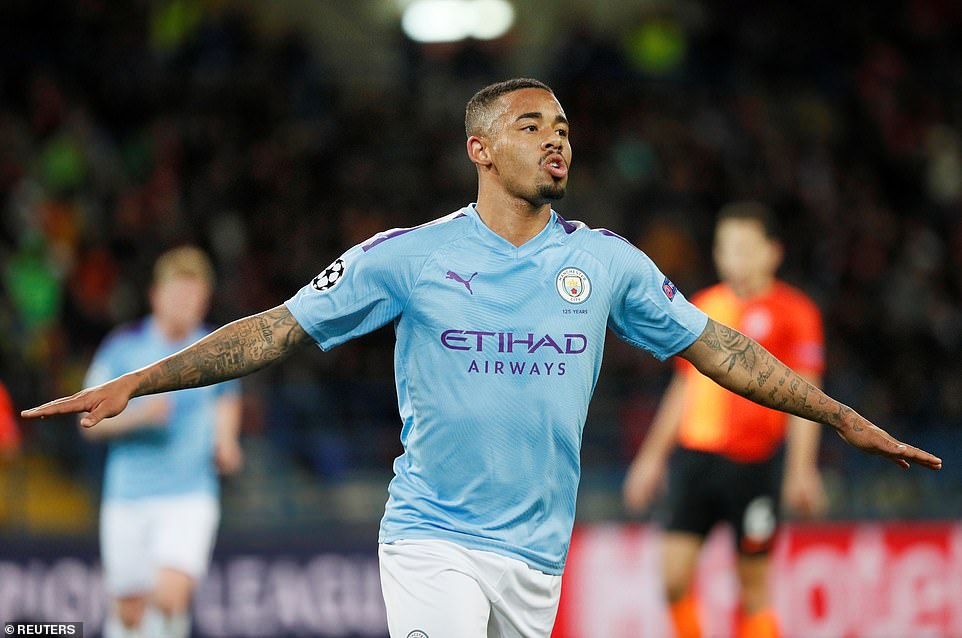