Shaman on 5,000 mile trek to rid Putin of ‘demons’ arrested by heavily armed police in Siberia

A shaman who was walking over 5,000 miles from Siberia to ‘kick the demons’ out of Vladimir Putin at the Kremlin has been dramatically arrested by masked police armed with machine guns.

Alexander ‘Sasha’ Gabyshev, 60, nicknamed the ‘new Rasputin,’ in reference to the crazed monk who took a malevolent hold over the last tsar of Russia, was halted this week, six months into his trek.

The shaman made clear the aim of his two-year pilgrimage was ‘to drive Russian president Vladimir Putin out of the Kremlin’.

He explained before his detention: ‘God told me that Putin is not a human but a demon, which I must expel. This is why I am walking there, to expel the demon.

Alexander ‘Sasha’ Gabyshev, 60, poses with a woman while on the road to Moscow, he had hoped to ‘kick the demons’ out of Vladimir Putin when he arrived at the Kremlin 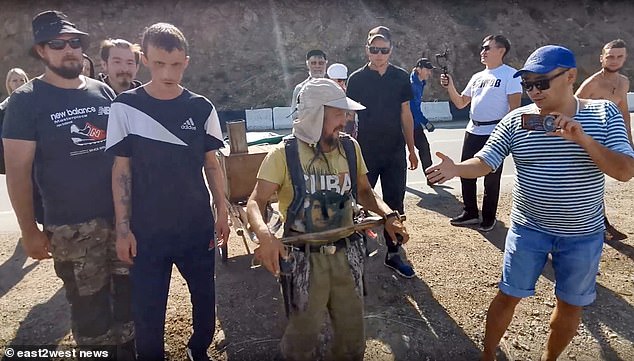 Gabyshev greets locals on the way to Moscow – he was stopped six months into the trek, the Ministry of the Interior confirmed and will face charges in his hometown for unspecified crimes 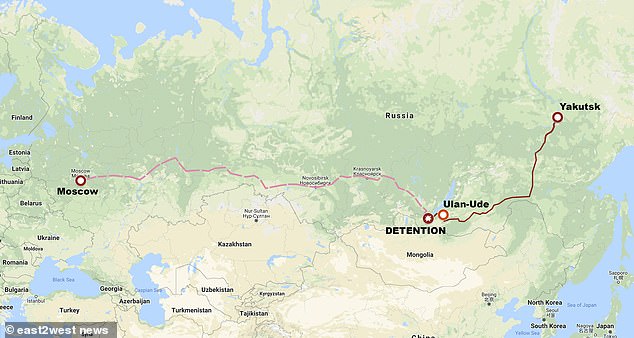 ‘At first I will try with peaceful methods like gatherings of people and rallies. Should it not happen by peaceful ways, there will be others.’

Gabyshev, who had aimed to arrive in Moscow by early 2021, he was held by heavily armed masked police at a camp site near Lake Baikal in Siberia.

Police say the man who describes himself as a ‘warrior shaman’ will be returned to his home region of Yakutia – officially called the Sakha Republic – to face unspecified criminal charges.

‘There were several dozen armed people,’ said eyewitness Viktor Yegorov as his followers at first thought he had been kidnapped.

‘They arrived in many cars, surrounded the camp and went straight to the shaman’s tent. 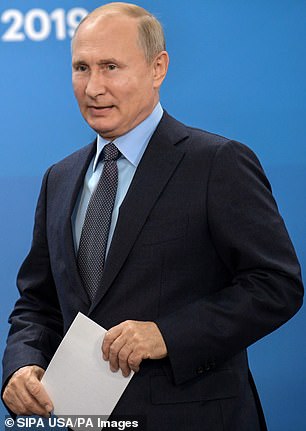 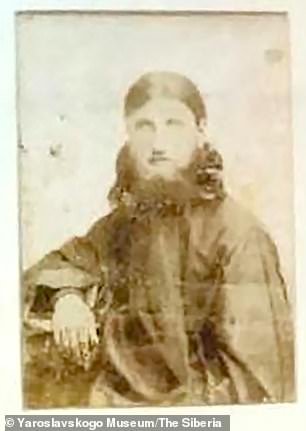 ‘He was pushed to the ground and then dragged into one of the cars.

‘The attackers didn’t show us documents and didn’t explain who they were.’

Later the Ministry of the Interior admitted the shaman, who carries a hunting knife, was seized by police.

‘A man born in 1958 was on a search list for committing crime in the Sakha Republic,’ said a spokesman. ‘The man will be transported to Yakutsk on the next plane.’

As he moved along his route, people started to join him while others offered food, shelter and money to help his cause. 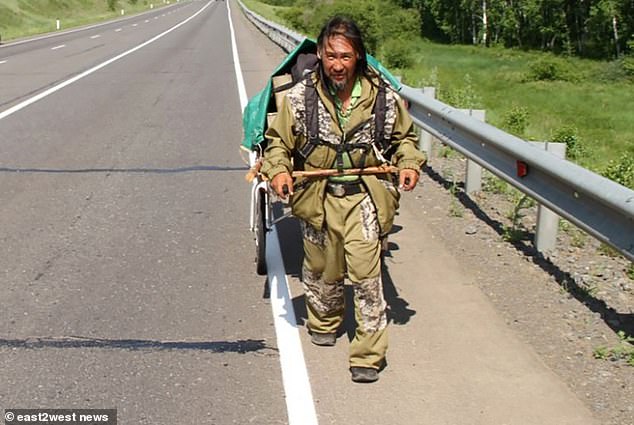 Gabyshev making his way down the road to Moscow, he was halted at Lake Baikal in Siberia, on the border between Buryatia and Irkutsk 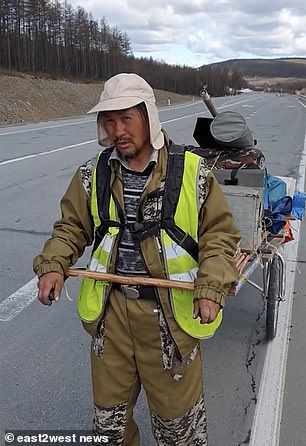 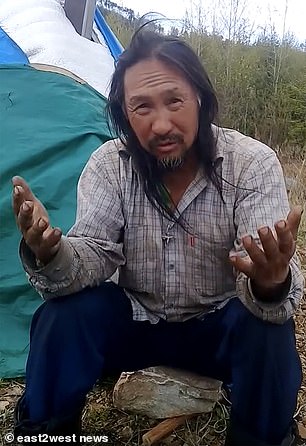 On the road: Gabyshev making his way from Yakutsk to Moscow, he started in March and expected to finish in early 2021 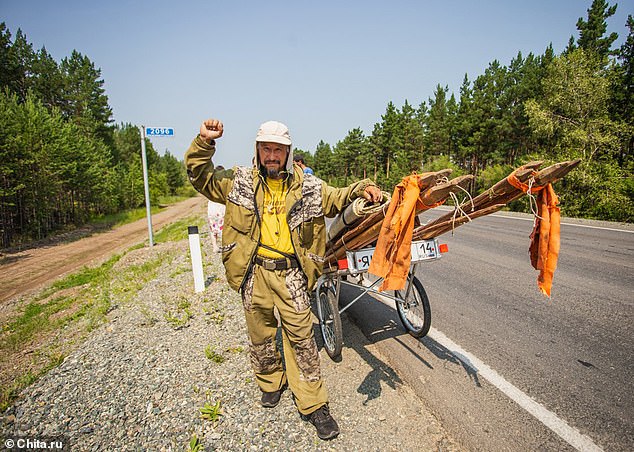 Videos about him started clocking up millions of views.

The widower explained: ‘The aim of what I am doing is to create a different Russia which has to be young, new, and open to the world.

‘Power has to be with local communities, everybody has to be equal.

He was held near Vydrino village en route from the Buddhist republic of Buryatia to Irkutsk region. 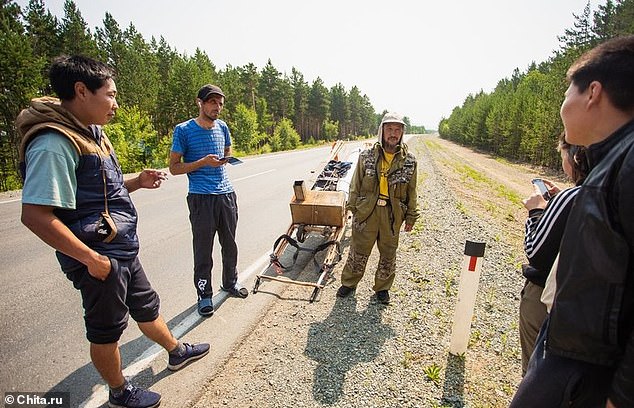 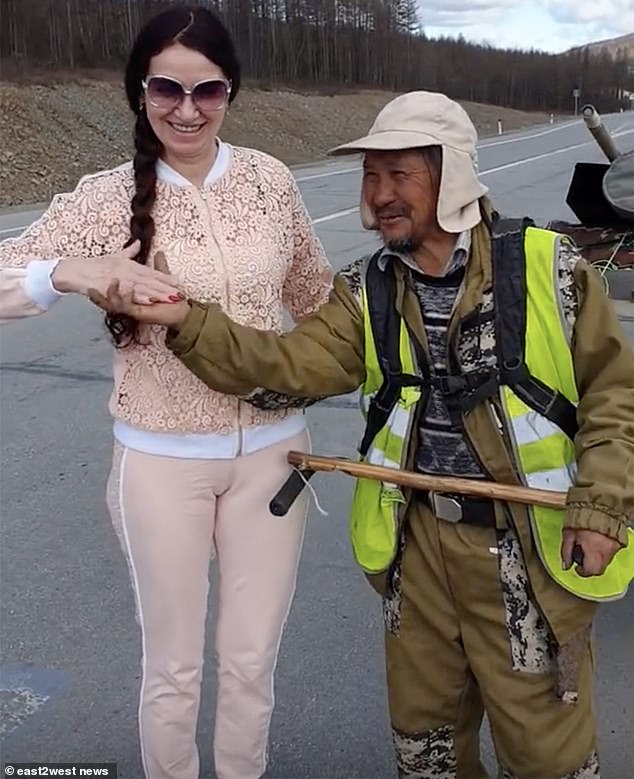 He was ‘healer’ to their sickly son Alexei, the crown prince, shot by a Bolshevik firing squad with the rest of the imperial family in 1918.

Rasputin was killed in December 1916 by Russian noblemen fearful at his sway in the royal family.